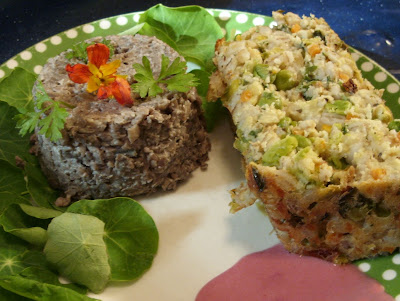 I have been on my feet since 5 AM, and it is now 7 PM. It has been a wild day, complete with water collecting under the floorboards from the air conditioner. That little problem still isn't resolved, but thank goodness for dehumidifiers, and an unseasonably cool day. Unexpected chaos aside, I did manage to make a rather superb dinner. Up until the time I brought the meal to the table, I wasn't sure any of it would be edible. It was. They're eating it again tomorrow.

I harvested the last of my purple bush beans today. I'll miss them, and next year I've resolved to plant several more containers. I still cannot believe how well they grow in pots. The nasturtiums were another pleasant shock with respect to their hardiness. I always thought they didn't like extreme heat, but they survived our miserable summer, and are still producing enough leaves and flowers to keep us in late-season salads.

I served the mushroom timbales cold. You could serve them warm, though it might be a bit trickier to unmould. I'd let them stand a good ten minutes out of the oven before attempting removal. I used a whopping two pounds of mushrooms to make four timbales. I don't know what your budget is like, but I never would have made these had I not happened upon a fantastic mushroom bargain. These were plain, old white button mushrooms. I'm sure you could get exotic with these and use an assortment-but again, the cost might be prohibitive. I still have another five pounds of mushrooms to deal with tomorrow (hey, it was a really good bargain) which I suspect will become potstickers for the freezer, and/or pirogi.

The cherry sauce was an experiment that came together nicely. You don't really need to enrich it with cream-the reduction is rather flavourful and a small bit at the side of the plate would have been adequate. Since when have I ever left well enough alone. The boys liked it fine, but personally it seemed a bit rich with all the butter in the mushrooms.

Finally, the barley loaf. Unlike most vegetarian/meatless grain and vegetable loaves, this one, "actually tastes good". So claims my better half. This isn't vegan as it has eggs and cream in it. You could use broth and egg replacer, but then it wouldn't "actually taste good." Your call. 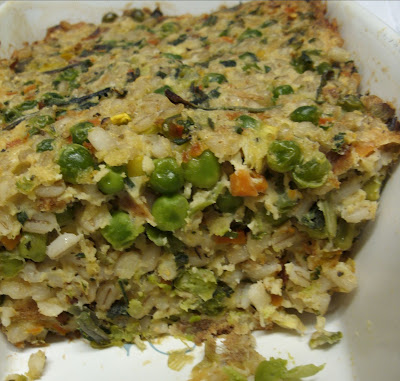 For The Mushroom Timbales:

2 lbs. mushrooms chopped as finely as possible (just chop the hell out of them with a chef's knife)
5 tablespoons butter
Salt/Pepper
1 teaspoon dried thyme
1 teaspoon crumbled dry sage
1 cup wine (if serving this with meat, use red otherwise use dry vermouth)
1 ounce cream cheese (or soft goat cheese if you have it)
4 well-buttered large ramekins

In a large, heavy pot melt the butter. Add the mushrooms, salt/pepper, thyme and sage. Cook over medium heat until the mushrooms have given off most of their water. Pour in the wine, turn the heat to high, and burn off all the liquid, stirring constantly with a wooden spoon. You really want to get rid of as much liquid as possible. It won't be completely dry because of the butter, but you don't want liquid pooling in the pan. Try pressing down with the spoon-if water comes out, keep cooking. When you are satisfied that you have evaporated off most of the water, remove to a bowl and let cool slightly before beating in the cream cheese. You will note, I did not use eggs to bind this as they are not cooked further. If you prefer to bind with eggs, set the timbales into a water bath in a 325 degree oven for 25-30 minutes or until set. Pack firmly into buttered ramekins and chill until serving time. Unmould by running a thin knife around the edge, and inverting onto a plate. Makes 4 servings.

For The Barley Loaf:

Soak barely in water to cover for 1 hour. Drain. Bring broth to a boil. Stir in barley, cover and simmer about 30 minutes or until most of the liquid has been absorbed. remove from heat and let stand 10 minutes.

heat the olive oil in a large, heavy pan. Add the carrots and green beans first and cook about 5 minutes until softened. Add the remaining vegetables and spices and cook until softened, but not done. In a large bowl, combine the vegetables, barley, cheese, and breadcrumbs. Mix in the eggs and cream. Mix really well, using your hands if need be.

Butter a large loaf pan (or 2 smaller ones) and fill. Don't be afraid to mash it in there, but don't overfill it. Bake about 30 minutes, or until it seems firm and the top develops a golden crust. Cool slightly before slicing.

For the Cherry Reduction:

Bring everything to a boil, and cook, stirring when needed until it has reduced to 1/4 of original volume. Remove to a fine sieve over a heatproof bowl. With a wooden spoon, mash the cherries and plums until they are forced through. This takes some time. Strain once more to make certain you catch all the bits of rosemary. You can serve this as-is, or enrich it with cream.