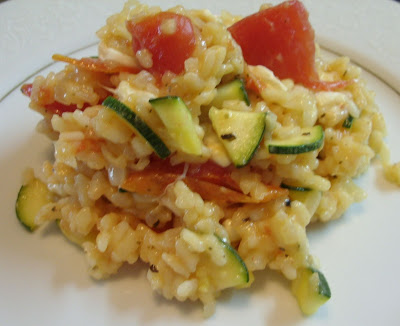 We are not a family that consumes much risotto-practically none, to be more accurate. I've been looking at the jar of Arborio rice purchased ages ago for something I can't well remember, thinking I should make risotto in a sort of, "get it over with" task. So I did. The boys liked it. Hallelujah. Now I have a place to dump leftovers (actually, I'm not kidding).

I followed the recipe from Lidia Bastianich in Lidia's Italian American Kitchen. Unlike many (most) recipes I've seen for risotto, this one gives the home cook an idea of what should be happening to the rice at each stage. That was helpful. I hate when cookbooks assume you will be able to judge if something is done without explaining what "done" is. That isn't a problem with this cookbook.

I really don't understand what the fuss is about 20 minutes of stirring. The way people carry on about making risotto (or polenta for that matter) like they were trying to confit a goose. I've made goose confit, and risotto was a hell of a lot easier). I mean, even Rice-a-Roni requires some stirring (I think).

For the 1/3 cup wine I used dry vermouth. I had a lovely bottle of my new, favourite cheap wine (three bucks!) Aconga, from Argentina-but that's too good for risotto. Really, I cannot believe how good a blended white wine can be. I would make a joke about Chardonnay that doesn't taste like Chardonnay-but it isn't a joke. I really should just go buy a case before the price goes up. Most of the time I use vermouth in recipes that call for dry white wine, as I always have a bottle in the door of the fridge, where wine tends to get used soon after opening.

The recipe is widely available on the web, and in the book at your local library-so I won't bother with reprinting it here. It is a fantastic book-well worth picking up if you see it at a used sale (I paid $1.00 for mine at the Omaha Library Sale-coming up September 8-11th at the Swanson Branch as well as on-going weekly sales on Thursdays 10-3).

I still had half a courgette left, so I breaded and fried sticks that I served with a rich spaghetti sauce I had leftover. With a salad, it made a nice dinner for an evening that was...you really don't want to know) 104 degrees F. with a heat index of 115 degrees F. I dunno, what's that in Centigrade? Something like 44? You get the idea-hot.
Posted by Goody at 4:43 PM
Labels: Courgettes, Italian, Rice, Risotto, Tomato Sauce, Tomatoes