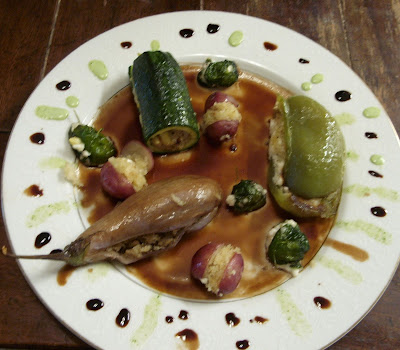 Unlike candy marketed as, "fun sized" (which ought to be larger, not smaller) this is a somewhat fun treatment of dwarf varieties of vegetables. I have more aubergine taking over the garden than I can think of uses for-but this seemed as good an idea as any.

Years ago, Mr. ETB bought me an expensive, absurd vegetarian cookbook in Italian. As this is the 18th anniversary of our first date, I dragged out the blasted book for inspiration, and found some mini-stuffed vegetables. Happy anniversary, honey! 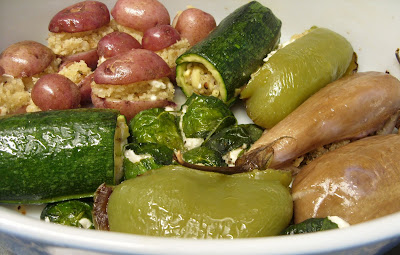 You haven't lived until you've par-boiled potatoes the size of marbles, then carefully scooped out the insides to mash into a filling before sticking it back inside. The courgette was fun too. The aubergine went better than expected, as did the pepper, but the truly absurd moment came as I was blanching nasturtium leaves with the intention of filling them with a cheese mixture and baking them. In my defense, those were the most popular part of the dish, but I did feel somewhat foolish standing there preparing them.

I used the insides of the vegetables as the base for the fillings-the aubergine pulp was cooked in olive oil with herbs, then tossed with bread crumbs for a filling. The courgette was chopped fine, tossed with herbs and mixed with soft cheese and garlic. You get the idea. As I completed each vegetable, I chilled them in a pan so they would be ready to go. The pepper and aubergine did get a quick roasting in a 425 degree F. oven before filling, but all told it was about ten minutes. Before baking everything at the end, I lightly brushed the vegetables with olive oil and set them in a 425 degree F. oven for about 8 minutes.

You could do this with any small vegetable-the cookbook had green beans, scallions and peppers the size of my thumb. You'd have to be pretty dedicated to fill a green bean.

The sauces are a chlorophyll cream made from parsley (that came as a bonus science lesson for Danny on extracting chlorophyll from green leafy vegetables) and a reduction of balsamic vinegar. Those were fun, but probably not worth the effort for a weeknight dinner. 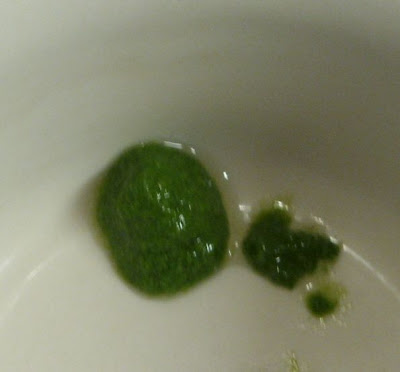 Unrelated-I made about a gallon of borscht today. I don't intend to be cooking for several days. This is the last weekend before the school year begins anew (not that our ever really ends, as we homeschool) and I'm determined to see Danny has some fun, whether he wishes to or not. "Have fun, damnit!"

Posted by Goody at 5:09 PM
Labels: Meatless, Things My Son Will Discuss In Therapy Someday, vegetables