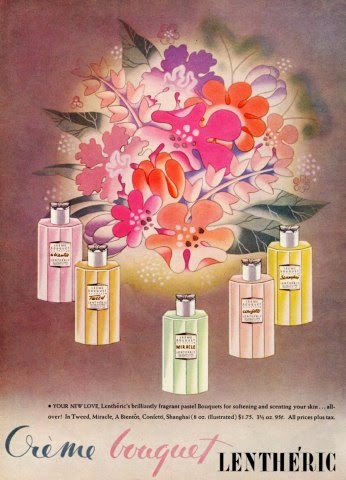 After my experience with the vintage bottle of Lentheric Shanghai I was hesitant to try the other fragrances in the set.  Now that a few months have passed, and the memory of that aldehyde assault has lessened, I popped open the (very) tight (stuck) lid on my bottle of Confetti and gave it a go. Confetti was launched in 1939, and my bottle dates to the 1950's.

Collecting vintage perfumes has taught me a valuable lesson-never, ever stick your nose to the opening of a recently opened for the first time (in a long time) perfume. I should have learned this lesson after my experience with a bottle of Flambeau that resulted in a three day long migraine, but I'm a slow learner. It was only after experiencing the nasal membrane searing of a bottle of Liu, that I finally understood that it is a really unwise thing to do. I've since taken to dabbing a bit on a cotton hankie, or a piece of good quality acid-free cotton bond paper previously known as , "Resume paper" (CV if you're in the UK) back when resumes were sent to the printer rather than filed by email. I have tons of that shit, because I'm old. You may think using your old resume for perfume testing is a strange thing to do, but I find it fitting. I like to think of it as olfactory anthropology. Anyway, I wasn't putting a fifty year old fragrance directly on my skin until I had a bit of an idea what I'd be dealing with. Learn from my mistakes people, learn from my mistakes.

Another thing my interesting life has taught me is that there's almost always a hitch. When I was eight my mother bought me the most beautiful dollhouse. I didn't even know I wanted a dollhouse until I woke up on my birthday, staggered downstairs and saw it sitting on a card table in the front room. It was beautiful, with running lights, and the most exquisite furniture. Made in Sweden, it must have cost her a small fortune before she began furnishing and decorating it. I knelt down at it, marveling at the generosity of the gift, and wondering how my mother could have possibly managed to do something so thoughtful without ruining it. No holiday, birthday, graduation, or wedding went by without my mum going off and ruining it. I'm convinced it wasn't intentional, just something in the way her mental universe functioned that made her incapable of not screwing things up for others. I don't think she was aware of it, and wouldn't have understood if it had been pointed out. Obviously, I should have seen it coming, because it was my birthday, and my mother had bought me a dollhouse, but it was only when I started to look at the, "Family" dolls that I noticed the father was missing his head. I later found it in the tiny doll house toilet. I never mentioned it, but the rage in that little plastic doll sort of ruined the doll house for me. Obviously, I'd seen it, and felt like I was expected to acknowledge it so she could launch into a rant about how horrible my dad was (and he was horrible, but not horrible enough that you rip the head off the papa doll and stuff his noggin in the toilet bowl. Eight year olds can't understand all the messages in that, and it just ends up feeling sad). My point is (yes, I'm coming to that) that just when you think you've found a perfect set of vintage Lentheric fragrances, the Universe sends you a bottle of Shanghai that makes you want to flee the room. So yeah, I was ready for Confetti to be really awful. There's always a hitch. And then someone's head gets severed.

I dabbed the hankie and paper and  stepped waaay back. After a few moments I carefully waved it before my face. Not terrible from a distance of a foot-that was encouraging. At that point, I just pulled the goddamned stuff to my face and breathed in deeply. Amber. Good, I like amber. It isn't typically the first thing that hits you in a perfume, but age might have killed some of the lighter notes. There's some vanilla/tonka bean in there too. Great, I like tonka. I went ahead and dabbed some on my wrists and headed out. It took a bit-maybe fifteen minutes for my body heat to react with the perfume (damn you poor circulation) but I was making my way through the frozen aisle when I caught the unmistakable scent of civet. The real stuff. I don't dislike civet the way some people do, though I can't really get on with it in large doses (Like Jicky). This was just about right. I couldn't believe how rich it was after so many years-there's a lot to be said for stuck caps on bottles of perfume.

You can read another blogger's take on Confetti, HERE but I don't smell half the things she does. Given the age of the bottle, it is possible I just don't smell it, though oakmoss is rather distinctive, and doesn't typically fade in older bottles. As for lavender and patchouli I just don't get them at all. That's the great thing about perfume-how different the experience is for people. Half the time I can't smell whatever the company's listed notes are for a fragrance, so I tend to trust my nose instead. I don't doubt the existence of these notes, I just don't smell them in my bottle. I personally wouldn't call this a chypre.

My guess is that Confetti once had some citrus and spice that has long since faded. I get the sense it was once a spicy Oriental, but time turned it into whale puke/cat glands and some vanilla-and I say that in the nicest possible way. It wouldn't be an everyday fragrance for me, but I can see wearing it perhaps layered with something a bit spicy to compliment the amber notes. I was braced for awful, and while I wouldn't describe it as life-changing, I'm pleased that I have a very wearable fragrance to enjoy.

Next week, I'll give Dark Brilliance a try.

Your dolls' house story made me so sad - what a horrible thing to do to a child! The best I can say is, at least your experiences have taught you how to be a great mum.

I envy you this set no end, and Confetti sounds wonderful.

Your mother was probably kin to my grandmother. Yow.

Now I'm wondering if your dollhouse was a Lundby. They're incredible.

@Mim
I don't know how great of a mum I am, but I've tried to keep my moods to myself.

But don't envy the Shanghai! I swear, that stuff could be toxic for all I know.

It Was!
In the 90's I gave it to a friend's daughter who had five older brothers and never really had anything of her own. I've never regretted it. At last, someone got some enjoyment from it.

Whale puke/cat glands and some vanilla... Umm, can't say that's sold this perfume to me!
The dad doll's head in the toilet story made me laugh, I'm afraid to say - and I'm sorry about that, because I know it signifies anger and distress, and it spoilt the dollshouse for you, but there is something weirdly, wonderfully brilliant about it as a comment on the myth of family bliss... Perhaps it's easier to see the humour when it's not your mother and not your gift. Please don't hate me and my perverse sense of humour. xxxx

Don't knock the whale puke until you've tried it ;)

I'm not at all offended-we laugh about it here too. My mum didn't have a filter-for anything really, so it was just another day.

HAH!
Your mom sounds like the queen of passive-aggressive behavior. Apparently you weren't even allowed the fantasy of the 'perfect family' in your 'perfect dollhouse'? Ahhhh...life before Prozac.
I read up on a bit on Lentheric, it seems they were bought by the Big Pharma co. Squibb. Perhaps that's why I found the descriptions of most Lentheric perfumes rather uninspired (but their ads are gorgeous). Tweed sounds like the only one I'd be interested in.
Dark Brilliance sounds interesting. Beware the Bulgarian rose- it can be sweet & cloying on some people (me), rather dank & rank on others, & or even 'soapy' to the point of being harsh.

Well, she had enough valium and dilaudid in her system (and gin) that it should have done *something* to mellow her out. I can't imagine what Prozac would have done to her.

Tweed is really beautiful, but the new version floating around is not. It is still easily available all over ebay though, if you get motivated to try it. Lentheric also had one called, "Pink Party", which just kills me. I've not bought a bottle of that one-yet.