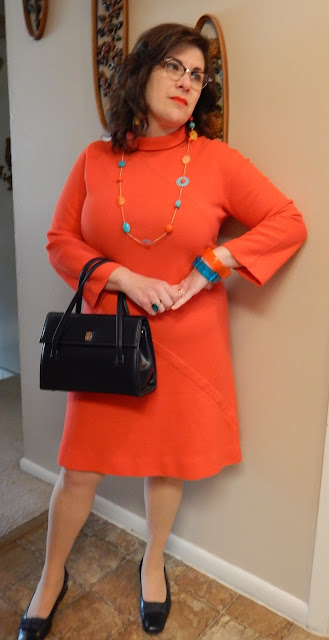 Coral, orange, peach, apricot-these are colours that shouldn't work on me with such a flushed nose and cheeks, but somehow they always do. As we're in the long part of winter now (with another storm expected on Tuesday) I find myself reaching for brighter and brighter clothes. I wish I could go back and tell my younger self to stop wearing so much black, but I'm sure she wouldn't listen. Stubborn, that one. 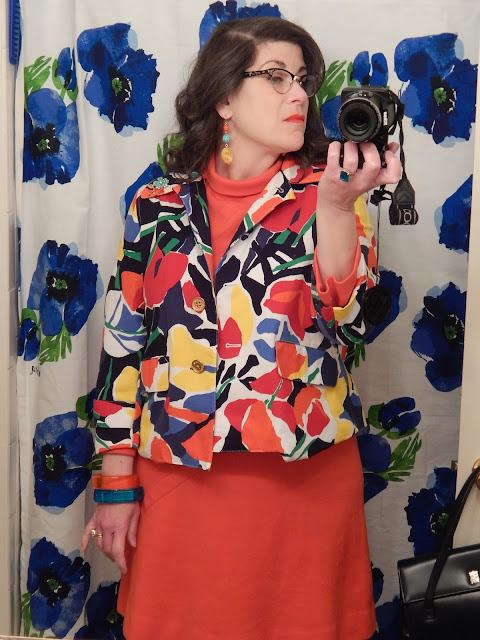 We stopped at the garden centre for seeds today. They were varnishing the indoor decks where the patio furniture will eventually be displayed. If that isn't a sign of spring, nothing is. There weren't many plants save for some cyclamen and forced tulips. My lazy tulips are just starting to poke their heads out of the pots. This was the first year I forced them, so I'm excited to see how it will go.

We purchased the following seeds:

So that takes care of the early garden.  In the meantime, I have seeds for sprouts that is *sort of* like gardening even if it is in a jar!

I buy most of my herbs at the Spring Affair in Lincoln, Nebraska each year. Different nurseries, and university Ag departments will have items for sale. The prices are good, and I don't need to give up valuable window space trying to sprout seeds. If it can't be direct sown, I don't buy it in seed form. 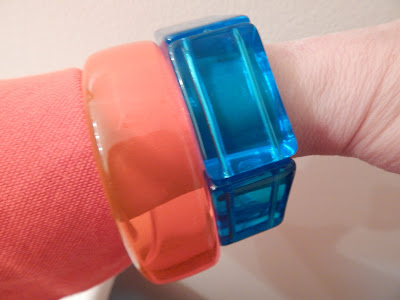 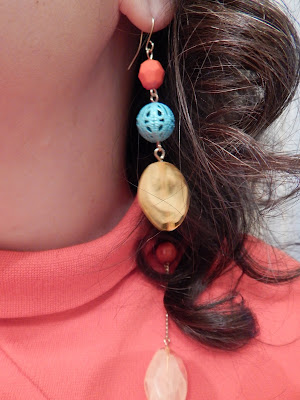 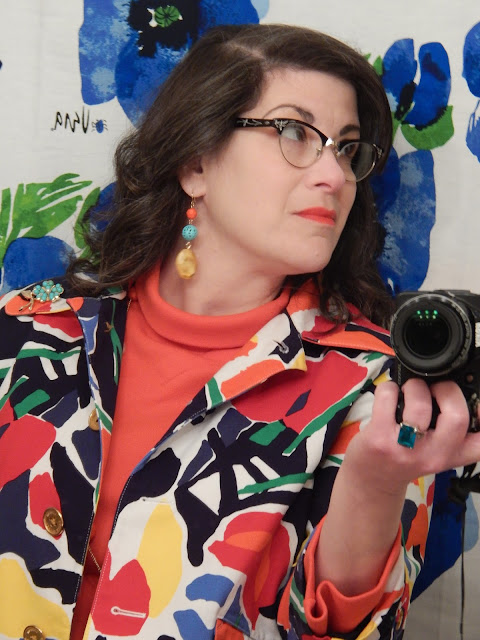 Outfit Particulars:
Wool double-knit 60's dress-Fairy Tail Costumes, Omaha
Ralph Lauren jacket-Goodwill
Earrings and necklace-K Mart
Bangles-blue (Target), orange (Goodwill)
Blue ring-Hand-Me-Ups
Vintage shoes-Goodwill
Vintage handbag-Thrift World
Lippy-Maybellene-Vibrant Mandarin (#885)
Fragrance-Courreges  in Blue (I just scored a second vintage bottle, so I've been wearing it a bit less sparingly. Know how you sometimes catch a whiff of something and think, "What smells so good?" And then you realise, YOU do? That's Courreges in Blue for me, and I never thought I could love aldehydes and marigolds!) 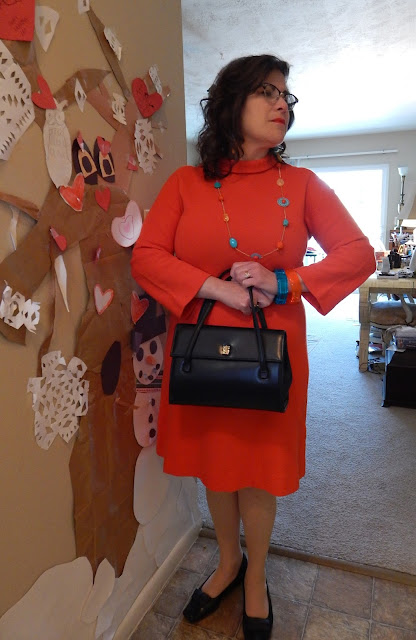 The hall-tree has been given a Valentine's update. 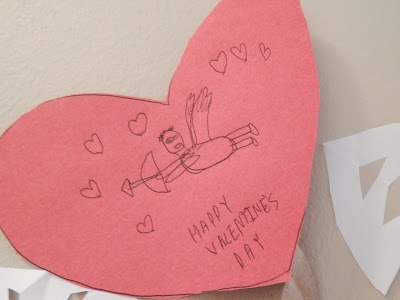 Danny made the Cupid. I had to laugh because it looked like a demented cartoon. "Oh no, bonkers Cupid is out shooting arrows at the wrong people...run!" 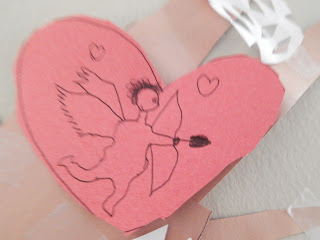 He made another, which might be technically better, but I think I prefer the goofy one. Who wants a serious Cupid? 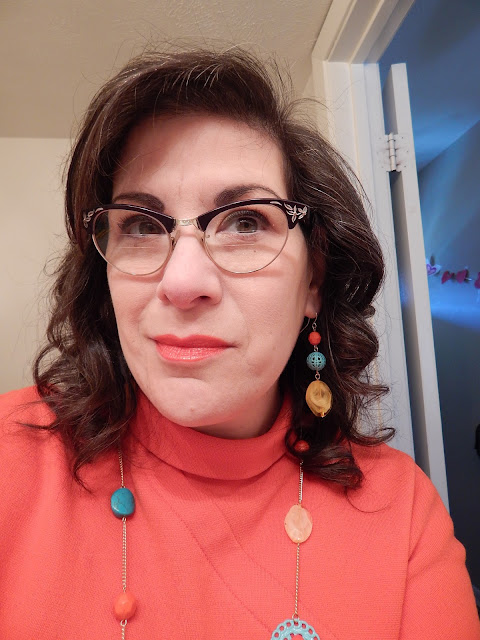 Readers in the Northern hemisphere-have you started planning for spring? Do you garden?
Posted by Goody at 2:01 PM

Stubborn when you were younger? Gosh. I can't imagine that. So pretty in coral. That is a color that deserves a comeback.

I can wear coral clothing, but coral makeup looks garish on me. The supposed "gorgeous on everyone" Nars Orgasm blush ( coral pink with gold shimmer) looked anorgasmic on me. Coral lippies look clownish beyond belief unless I have a tan.

That coral ensemble looks FABULOUS on you!

My winter garden is a bit off this year. Visiting Florida in September meant all my winter veggies suffered a month's late start. My seed haul from the Florida trip is stashed in an airtight ammo box next to my perfume decants in the fridge. I've already my spring flowers in pots (petunias, gaillardia, coreopsis, pansies, calendulas, sweet Williams).

I much prefer the lower cupid with the Sid Vicious hairdo.

Coral really suits you - and I love the pops of blue you've got in your jewellery there.

I haven't bought any seeds yet, but I really should get some soon, and start my tomatoes off. (I start them in the bathroom; as I grow them outside I need the extra time or they won't fruit in time for it to ripen.) I'm going to have to look rapini up, I've never heard of it.

My mustard greens, lettuce, and chard are happy in the yard. Carrots, beets, parsnips, celery, and brassicas are in the galvanized troughs round the side of the house. I'm starting the tomatoes in their cell packs soon (have to wait until there's a little more daylight, because I have to do them outside or cats will destroy them). Beans and peas will go in fairly soon.

Yes, coral does suit you and it looks fabulous with the blue of your bangle echoed in the lovely jacket. Tres chic, you look!

We have just got an allotment and OH has planted quite a bit of veg but not sure what; think it was carrots, beetroot and some sort of cabbage. We have leeks and a couple of other things growing already, left behind from previous owners. He will be planting potatoes in March I have also requested rhubarb (I want to make rhubarb and ginger jam - yummy!) We also want to grow lots of soft fruit like raspberries, strawberries, blueberries and gooseberries. We have grown these before in our garden but in containers,so very small quantities.

I'm not a gardener but in our tiny garden we plant everything in pots and I'm looking forward to seeing the tulips and crocuses coming up - we have green shoots but no flowers, as yet.

The cupids are very sweet and thank you for adding my blog to your side bar.

@Connie
Thank you. It would certainly be easier for people to wear than the orange and yellow shades that come around each spring.

@Bibi
Oooh, hadn't heard of the blush-that might be good on me (I'm so pink anyway, a little blush in the right spot might help even it out). I'm not sure the lipstick is doing me any favours, but I like it.

I know you're going to have a grand summer garden when it is underway.

@Mim
Rapini is also called, broccoli rabbe. It is a bitter green with buds that look like mini heads of broccoli. It has to be blanched before sauteing in oil, and it looks unappetising, but if you like bitter greens, it can be lovely with pasta or a good loaf of bread.

@Propagatrix
I'm glad to hear carrots will grow that way-I have a large bag-bed we're planning to use and I wasn't sure if they would like it. It is rather deep, so hopefully they'll grow. I could never get them to grow in the soil on the farm.

@Veronica
Thank YOU for adding me to your sidebar!
Rhubarb takes a while to establish but once it does, it is rather indestructible. My mother had a plant that is probably still alive at our old house (I wouldn't doubt it-that thing was hardy!). An allotment will be nice to experiment with growing more things.

That impressive blue bangle has exactly the degree of torque needed to lift this eye-catching ensemble from English-lady-with-lolly to (Sophia)Loren-in-Omaha. If you can find another stick of that lippy, buy it! You do wear corals well, and this shade doesn't have that awful tangerine rind tone one remembers from the 60s.

Good luck with the Oak Leaf lettuce! Mine always bolted until I replaced it with a heirloom variety called Deer Tongue. In recent years I've relied on neighbors for vegies and eggs. My herb bed has also been much reduced, save for the borage which has self-seeded and now serves as a ground cover beneath the front windows. Do like borage blossoms in my ice-tea ice cubes! The culinary herbs have their own decorative box on a concrete bench at the front door, where my guests are invited to sniff and pinch. (The holy basil is a favorite.)

That orange frock is fabulous, shows off your pins perfectly! Having a catch up on your blog, I have been bad at doing this of late, so sorry!!

@Beth
We grew the deer tongue last year and it was lovely. Some people have trouble getting it to go, but ours did just fine in large pots. I've never grown oak leaf alone (I've had it in mixes)but it is so pretty I just *had* to buy a couple packets. My "salad garden" is planted as much for show as it is for harvesting. You can cook the borage leaves (the prickly bits fall away in the water) but I just leave the plants and flowers for the bees as they really seem to love it. I'm hoping mine self-seeds and comes back from last year, but I'm sure it will end up where I don't want it. I bought a few new packets just in case.

We got our blizzard today-less than predicted, but enough that I was happy to be at home with nothing to do but bake.


@Sue
Don't you apologise-I'm always happy to hear from you when you drop by. If I lived in as beautiful a place as you do, I'd NEVER get on the internet! Hope your summer is treating you well.