It Ain't Me, Babe 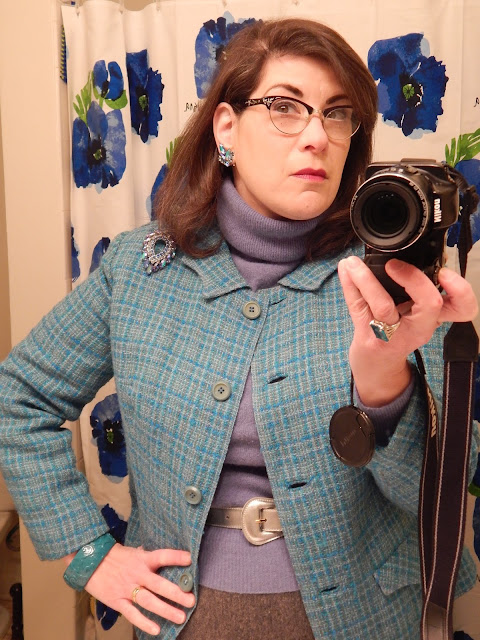 Like people who date jerks, or vote against their own interests, I seem unable to stop buying clothes in pastel colours even though they make me look like I'm about to be sick. Those pale, chalky, Necco-wafer hues scream to me from the sales racks, and before I know it I have a wardrobe filled with beautiful clothes that don't suit me. Add to the mix some angora/lambswool blend yarn and I'm utterly and completely unable to resist. The polo neck was all wrong for me from the start...so I built an outfit around it. 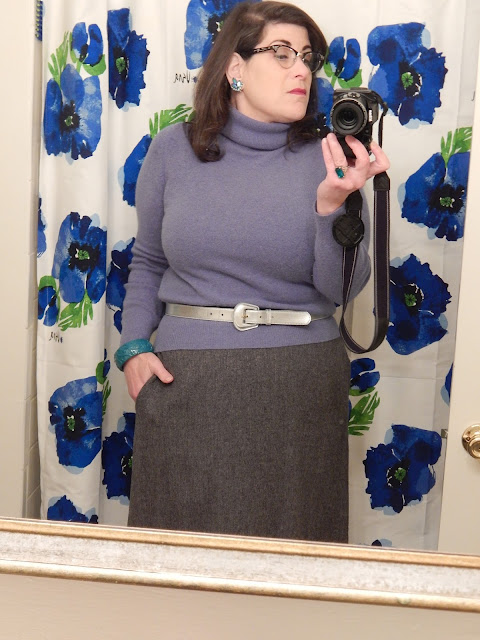 I'm starting to understand why my mother would wear one colour head-to-toe, including accessories. She wore mostly pastels...and nothing matches them. I mean, unless you want to look like a rejected Easter egg, Had I matched this with more heather/lavender it might have stood a chance. Some people can't do brown or beige-I can't do icy pastels. It kills me, but the more I look at these photos, the more I have to accept it is true. Yellow and peach aren't much better.

The polo neck was such a strange find. A 1970's made-in Japan woolen without a single moth hole or snag hanging on a rack of cheap Walmart and Target tops that probably lost their shape after the first wear and should never have made it to the Goodwill sales floor. The more I inspected it expecting to find flaws, the more amazed I was at the pristine condition. I couldn't imagine why anyone would buy something so nice and then not wear it, much less hang onto it for forty years. I reckon, she must have had a complexion like mine, but persisted in thinking she'd find something to wear it with. Sometimes without knowing the original owners of clothing, I know them all too well. 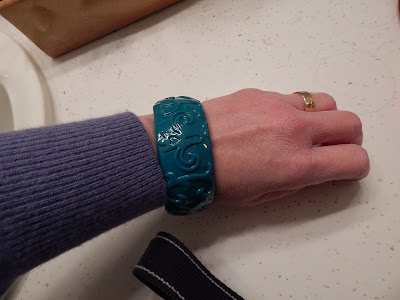 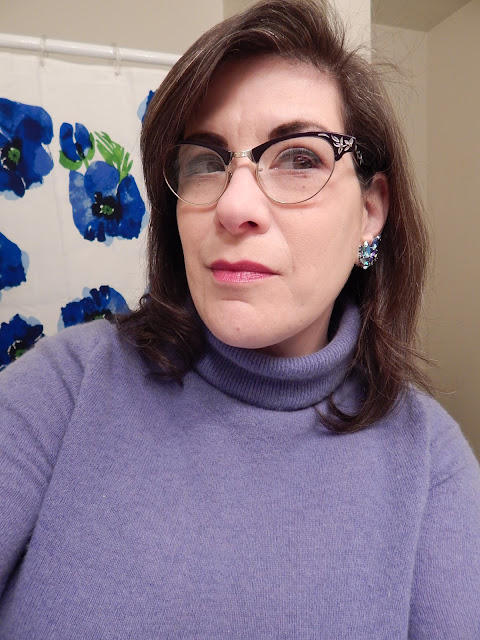 I've started making a large pile of vintage that can be sold. Some pieces I keep for my collection whether I can wear them or not, but a vintage polo neck, nice as it is, won't be anything I'll regret moving along. I have two large boxes now that need to be dealt with. Hopefully, someone that can wear pale colours will recognise the quality of a well-made woolen. 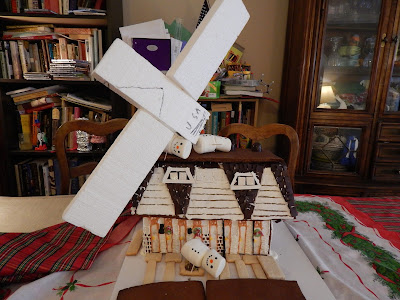 There's been a terrible plane crash at the gingerbread house! 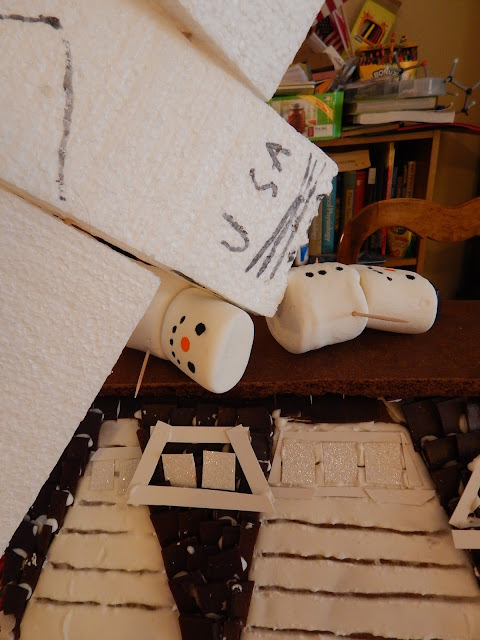 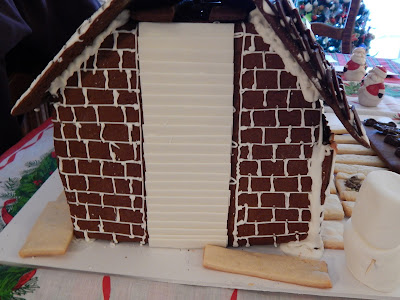 The gingerbread house was supposed to look like our row of houses. It was, OK. Not my best work, but it stood without cracking, so I'll consider it a success. It went out to the patio this afternoon for a certain squirrel, though I took off all the candy and gum because that wouldn't be good for Blondin. 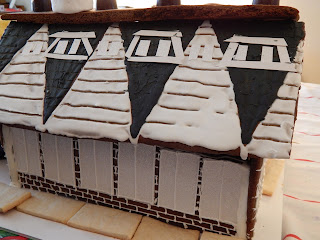 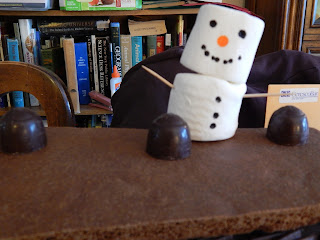 I packed the ornaments, took down the tree, and put away all the Christmas items for another year. It looks so empty in the house! 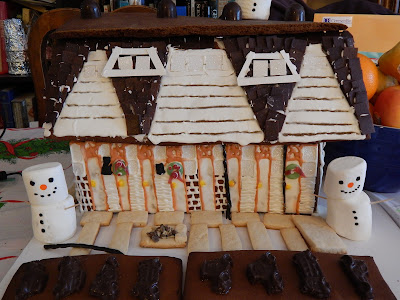 Mr. ETB's birthday is Sunday, so of course there will be a small party (and a funny cake, though nothing inspired by The Meaning of Life). He enjoys duck, so once a year for his birthday I buy and cook him one. Danny's vegetarian (as am I) but once a year I'm happy to roast a duck-it is quite simple once you've done it a few times. Being right after Christmas it was also on a rather deep sale, so a bargain luxury-what more could you ask for? Well...actually, there's a lottery drawing tonight that's worth over 500 million dollars (not a typo). We bought a few tickets because you know, it just isn't worth my bother for a million or two, but 500 million is another story. So yes, I could ask for more-I'd like to win the lottery tonight, but I suppose I will probably just have to be content with the bargain duck from Bakers supermarket. I'm not a gambler, so I can lose my four dollars, shrug, and say, "Oh well, it goes to education." Fun to dream about what I'd do with it though. I'd probably buy expensive cheese. Oh hell, if I win 500 million dollars, I'll buy the whole bloody dairy operation. 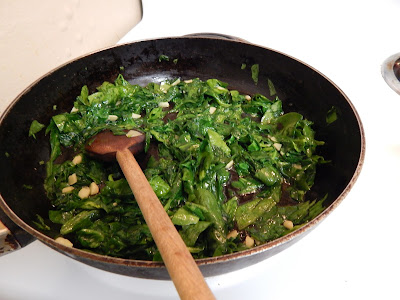 500 million is a lot of lettuce. Or spinach. This was spinach. Want the recipe?

a couple pounds of spinach, trimmed and chopped
about 6 garlic cloves, chopped
4 tablespoons olive oil
a handful of Kalamata olives, chopped
1 teaspoon fresh oregano
1 teaspoon thyme
Black pepper
salt to taste
a few ounces of Feta cheese, cubed
Optional- a few shakes of red wine vinegar to cut through the oil and salt (I prefer it, but some people like the oiliness).

Heat oil in a large pan over low heat. Gently cook garlic about ten minutes taking care not to burn it. Add the olives, spices, and spinach. Increase the heat and just as spinach wilts, add the feta to warm through. Serve with crusty bread, or over pasta. Takes all of ten minutes to do-dead easy.

Whatever leftover spinach and feta you have can be an omelette the next day.

Finally, we bought a video game console to use with the TV. No, it isn't anything sophisticated, it is the Atari Flashback system that has all the classic games like Pong, Space Invaders, and Centipede. We bought it for Danny, but after he goes off to bed the old folks sit there playing like it is 1982. I'm amazed at how good it is for $50.00 I figure it will pay for itself after a few weeks of Danny not plunking quarters into the game at Broncos.  I have a feeling I'll be using it more than he does. If I win the 500 million I can just go ahead and buy the arcade version. Oh hell, I can go ahead and buy the arcade.

I hope your mid-week is treating you well.

Oh, I do hope you win the 500 million! That would be so cool - just think of all the vintage you could accumulate! Your spinach looks delicious.

Mmm, we had duck for new year. So tasty!

I think you look pretty good in that sweater, though what ultimately matters is whether you're happy with your clothes not what I think. And what caught my eye to start with was the Sarah Coventry set. The brooch looks perfect on that jacket.

If you win all those millions you will be flying around the world meeting all of us BLOGGERS!!! I quite like that lavender on you, I would throw black skirt of pants and a wild and bright scarf on your shoulders/neck to give it the oomph you want. Happy duck eating birthday to Mr ETB!!!

HAH! My favorite Atari game was Q-Bert. I had an Old English sheepdog that used to go berserk & bark like mad whenever he heard Centipede being played.

I was thinking that pastel lavender sweater ensemble looked really good on you. That lavender is just muted enough to work with your complexion. I'd be sporting some dark purple winged eyeliner with pearly beige shadow to make that outfit completely "Kim Novak".

I can't wear pastels either (unless they're REALLY muted to the point of being drab), they make me look huge & pasty. Celery green & some pale yellows aren't too bad, but meh I don't really like them anyway. I bought a baby blue cotton salwar kameez set with gold embroidery- WHAT WAS I THINKING!?! It's gorgeous but looks like hell on me.

Dear me, I thought that plane was a styrofoam crucifix labelled "USA". I was thinking the US Religious Right had really gone too far this time, hacking into gingerbread houses in private homes! Snowman is an island indeed.

@Radostin
Nobody won. The jackpot is now some absurd number for the Saturday drawing.

@Mim
Thank you. The Sara Cov set was inexpensive back then because there wasn't Etsy to drive up prices on vintage.

@Sue
If I had won, I would have been on the first plane over! Maybe I'll win the next drawing.

@Bibi
I see comic possibilities in a crucifix with USA emblazoned across it. I'm not sure what (yet) but there's definitely potential there. You gave me e good laugh-thank you!

I actually think you look pretty in pastels. I really do. You should listen to your inner stylist telling you to buy them.

OK, spearing the condo with a crucifix definitely made me go back to the top of the post and scroll down s.l.o.w.l.y. Is the Religous Right after Goody, I wondered? It could happen.

I like the sweater skirt/combo enlivened by the silver belt. Keep the sweater, sell the jacket!

@Connie
If I listened to my inner stylist, I'd need to move to a bigger place ;)

@ Beth
Nah, the Religious Right is too busy going after other religious people-they tend to leave people like me alone. I have a few friends that are super-conservative and religious-homeschooling exposes me to all kinds of people and generally it has been a positive experience. They broad-brush as much as I do, so it has been good to find out how wrong we've been about each other.

Hey, I love '70s style polonecks and you pull that look off wonderfully :)