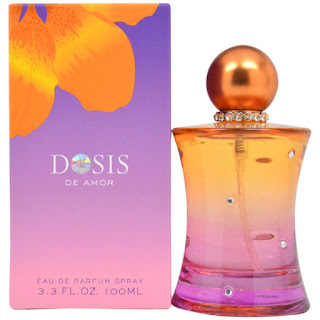 You know I love a good bargain fragrance, and if the two varieties I've tried from Dosis  are representative, they're onto something very good. I bought two sets, Dosis de Amor, and Dosis de Carino at Big Lots for $8.00 USD. Each set included a spray bottle, a roller ball bottle, and a body lotion. The way I run through hand lotion in the winter, it would have been worth it just for the generous tube alone.

Dosis is a company whose product line is aimed at the Latino community, and they're headquartered in Brooklyn, NY. I'm sure much of the design/marketing/celebrity endorsement is lost on me, but I can tell you the fragrances I tried are both quite good. Not my typical sort of thing (a bit heavy on the fruit notes) but I can confidently say if that is your kind of fragrance, Dosis is as well made as the pricier brands doing the same thing.

Before getting to the fragrances themselves I have to make a few observations about the bottle. If I were a teenager, I would adore the design on these. The ring of rhinestones at the neck of the bottle are a removable ring that can be worn. Gimmicky? Sure. The fragrance world is full of silly bottles-if you can sell perfume in a water-globe, you can include a rhinestone ring on a bottle of Dosis. My thirteen year old self would be delighted by that bonus. I'm less in love with the rhinestones studding the bottle, though time will tell how well they stay put. The bottle shape is nice, and easy for my arthritic hands to manage, and the cap is easy to remove. The sprayer works well, something that isn't always the case with bargain fragrances. The ombre effects on the bottles are just beautiful. The blue/green hues on Dosis de Carino are enough reason to buy a bottle as it looks so pretty on a perfume tray. You should display it too-Dosis fragrances probably don't require the careful storing of boxes in a cool dark spot, and at eight bucks, you're going to feel free to wear them regularly.

I'm not a fruity/gourmand fragrance lover, but Danny is. I had him try them both out, and within five minutes the bottle of Dosis de Carino had been swiped, and relocated to the dresser in his room. It had him at coconut and raspberry. Of the two, I have to agree that Dosis de Carino is the one I would wear most often. There's a hefty wallop of tonka bean and violets that mix with sandalwood and amber at the base making a rather nice combination. There's also a bit of cypress to cut through the sweetness at the top.

Would I buy it again? At this price, in this gift set-absolutely. DdC is a well crafted fragrance that is unlikely to offend co-workers in close spaces, and it isn't challenging to wear. It is a youthful fragrance, but I didn't feel out of place wearing it. Because of all the sweetness and fruit, I think this is a fragrance that would be best worn in cooler weather as the coconut and raspberry could quickly become too much in heat and humidity. The longevity is pretty good for an inexpensive fragrance-about five hours, though it goes a bit longer on fabric than skin.

Dosis de Amor is a little different from Carino, though still quite pleasant. Plum notes are complicated. Done well, you get Natori. Done less well, and you get Hypnotic Poison. Dosis de Amor is somewhere between the two, offering neither the tart brightness, nor the meaty animalic notes of decay plum can have. If anything, it is a bit like those "Essence of citrus" prunes they sell these days where they have a hint of lemon or orange. I like prunes, and Dosis de Amor has a bit of that, "Just opened bag of Sunsweet prunes" smell about it. That's not a bad thing, mind. There's a lot of citrus here, and berries but there's also unexpected green notes which tempers it a bit. Dosis de Amor starts sharp from the citruses and greens, but when it finally opens out with the fruit led by the plum, it softens into a lovely fragrance, sweet though it is. I can't see myself wearing this much, but I once again consulted Danny (as he likes sweeter fragrances) and it was met with enthusiastic approval. I believe that the roller ball bottle of DdA had also relocated to his room.

The body lotions are nice, non-greasy, and have a good, lasting fragrance.

Are the Dosis fragrances the best examples of fruity gourmand available? No, of course not. What Dosis de Amor and Dosis de Carino do is fill a space for a more affordable version of that style. They don't smell, "cheap" but they don't smell like you bought them at Saks either. There's nothing here you haven't smelled before, but both fragrances are enjoyable to wear. I can't ask much more from an $8.00 fragrance.

You know I asked for a recommendation for some good, reasonably priced tropical type fragrances at the discount perfume shops in Miami & mostly what I got were looks of disgust, then they'd usually direct me to the Victoria's Secret section or Bath & Body Works. Good quality tropical fragrances are easy to find in Los Angeles, so what's up with Miami? Anyway my Aunt Dot & I finally decided these discount perfume shops that abound in Dade county are ripoffs that don't know anything about what they're selling.
I tried some of JLo's fragrances like the highly rated Miami Glow, Rio Glow, & Sunkissed Glow and was not impressed. They were just so blah & underwhelming.

I ended up buying some Sonia Kashuk fragrance products on the closeout shelf at Target. They're all quite nice & very well done, these 3 were my favorites-
Pink Innocencia- Daft name but but a darned good tuberose sitting on a lovely amber base with a just a little magnolia.
White Etheriana- Top notes of Sicilian lemon, Brazilian acai and tulip accord. The sweet mid notes of Provence mimosa, bamboo and violet combine with patchouli, tree moss, peach skin and light musk. Simply gorgeous.
Yellow Alluriana- Grapefruit, verbena, and musk. Beautiful fresh grapefruit (not like the compote/fermenting notes that some grapefruit fragrances have) with lemony verbena on a pleasant white musk base. What's not to love about that?
I did find that the scent lasted all day in the body lotion, body butter, and hand creme but the eau de cologne only lasted about 2 hrs. None of the Sonia Kashuk fragrances were anything like that sickly sweet faux fruity rubbish that Body Shop, B&BW or VS feature. All were quite well done & smelled much more expensive than they cost. The lotions & butters were on sale for $6 & the eau de colognes were marked down to $12 for 3.4 oz., I did not try the body oils but wished I would've.

The plum in the Poison range (and in Mugler's Alien) always registers as grape Kool-Aid to me. Strangely, that isn't a negative attribute.

@Bibi
I have a Target near me (I never go) so I will make an effort to go check out what they have. Those all sound interesting.

@Propagatrix
Interesting. I haven't smelled Alien enough to recognise it (my initial reaction was to flee)but I'll have to give it another sniff.

Kinda funny/sorta related: Hastings Nebraska is the birthplace of Kool-Aid (there's a festival every year) and they go to GREAT lengths explaining that the drink consumed at Jonestown was Flavor-Aid. Not Kool-Aid. You don't spend time in Hastings without being reminded of this several times.