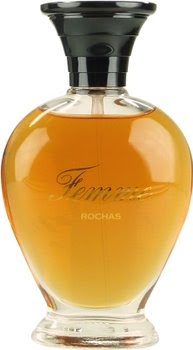 I didn't expect much when I purchased the gigantic bottle of reformulated Femme, and figured I would end up making a gift of it to someone. It was a bargain at the thrift store, and the bottle (though missing the box) was from what I could tell, used perhaps once. For years I'd been reading that it was a, "Cumin bomb" with a huge hit of plums, and peaches. I'd met cumin/fruit combination perfumes in the 80's, and we didn't get on well. I don't mind cumin notes in perfume (Cabochard, Aramis, Azuree) but plum will almost always send me running. Poison? Jean Paul Gaultier?  No thank you. About the only fragrance I enjoy with a plum note is Sofia Vergara, and the plum is muted against wood notes. So not a fan of plum. Happily, the plum in Femme is not the plum of Poison, a point I'll return to in a moment.

I'll say one thing for Rochas-they know how to do an impractical bottle that's hard to grip, and sprays out far more fragrance than you can comfortably wear. My experiences with Rochas perfumes have either been memorable for possessing infuriatingly clunky bottles with bad sprayers, or for being unable to smell them due to heavy concentrations of jasmine. Unlike the mammoth bottle of Byzance I once owned, I can smell femme-and she's as strange as the listed notes make her sound.

I've read reviews of Femme that talk about the perfume's sexiness. That happens quite a bit when perfumes have a noticeable cumin note, but I don't read that as "sex" in Femme. If there's civet in there (as the listed notes suggest) it has been neutered beyond recognition. Cumin+ civet ought to equal, "Sex" but here, (and I know I will get an earful for saying this) it smells like a cheeky smooch and a grope in the retirement home after a game of shuffleboard. Femme smells like elderly sex. I'm getting the horrible mental image of Jerry Hall and Rupert Murdoch. Sorry. You can scrunch up your face and say, "Ewwwww" if it helps. Now that I'm getting along in age I can say that isn't a bad thing (the elderly sex, not the Jerry/Rupert marriage) but it does alter the idea of sexiness as typically approached in perfumery. Femme isn't a youthful perfume. That's not to say a young person couldn't wear it, but it does project maturity in a similar way Mitsouko does. I wore Mitsouko through my twenties and thirties, and I suspect had I been aware of Femme, I'd have worn it as well, but be warned, it isn't a "romantic" fragrance in the sweet/floral way we have come to think of them.  Femme isn't a perfume  that makes me think of hot, sweaty, sexy dancing and clubbing. Femme is a perfume to wear to the library book club if you're hoping to get some afternoon action with the widower in the tweed jacket, and an early dinner at the country club followed by a nap (not sex) before drinks. You know, your desire for sex might not change with age, but the amount of work you're willing to do getting there does. Femme doesn't have time for the angsty bullshit-it just wants to get naked and be home in time to watch reruns of Matlock. Perhaps it is appropriate that the plum note comes across as a newly opened box of prunes. Ah...Sunsweet.


Rochas Femme isn't described as a chypre, but the hallmarks are there. Along with the plum/prune note there's a whole hell of a lot of oakmoss. A whole hell of a lot. I like oakmoss, and I particularly like the way it is used in Femme-massive quantities that last from start to finish. This moss clings on for dear life-it is the Roundup-resistant weed of the perfume world. No level of scrubbing will fade Femme's moss attack until it is damn well ready to wear off. Longevity on my skin was over ten hours-about two days on clothing. Don't say I didn't warn you. Femme is for serious "Moss Heads" only and heaven help you if you're one of the people that are allergic to it. Thankfully, that's one allergy I missed.


Half an hour into Femme there was a note I couldn't quite place that bothered me. It wasn't cedar or pine, but more common and it drove me half mad trying to pin it down as some vague "herbs crossed with pepper" note. Eventually I worked out it was a combination of rosemary and carnation playing with my nose-imagine wearing L'Air du Temps and chopping up fresh rosemary, whilst drinking mulled cider. I'm still not certain I like it, in isolation anyway, but in the overall composition it isn't bothersome.

Longtime readers will know that I don't care for noticeable cinnamon or cloves in perfume. Mix them with patchouli as in a perfume like Tabu, and I get an instant headache. Femme has both the spices and patchouli but it is so subtly done it appears almost as an afterthought Against all that oakmoss and plum, the spices didn't stand a chance-a positive to my mind (and nose). I keep making comparisons to Mitsouko, and I will make one more relating to the careful, measured use of cinnamon and peach with oakmoss-but be aware that Femme is a much different fragrance than Mitsouko, they simply share some skilled arrangement of notes. .

So what's in Femme? I'm glad you asked.

Not listed but certainly there:
Civet, musk, cumin, aldehydes,

Half of what's listed can't be picked out in isolation which to me is a mark of quality. I don't like one particular note to scream, "Look at me!" and then hit me over the head for an hour. Even typically hard-to-ignore notes like iris and rose seem well behaved in Femme. The exception of course is the oakmoss-you'll smell (and smell, and smell) the oakmoss. Not a terrible thing in my book, but something to keep in mind.

I have to admit I'm delighted with Femme, and I will be keeping and using the lifetime supply sized bottle I found at Goodwill. I won't however be wearing it to the library lest I stir up some old geezer looking for a minute and a half of passion.

Who new perfume reviews could be so much fun?

I've really enjoyed reading this and all your other reviews. I do not know how you can smell all those different notes - with me I either like the smell or I don't!

If 'Femme' is still around I'll try and sniff some when I'm in the Ferry Duty Free shop tomorrow.

Funny most plum notes come off as prune notes to me also. Somehow perfumery misses the pleasantly sharp tang that accompanies fresh plums as well as the light floral esters that make smelling plums so divine. I like the prune note in the discontinued Natori & the plum in Sofia Vergara's 'fume. Plus I want to be a hot Latina in my next life. At least I can smell like a hot Latina in this life anyway.
I glanced at those notes you listed from Fragrantica before reading your entire essay & thought- that sounds very early 80's & like a very Nancy Reagan/Helen Gurley Brown interpretation of 'sexy & chic'. Ew.
I noticed you mentioned AG's Eau d'Hadrien's dish soap similarities in an earlier post. I liked EDH but I wanted something a bit more floral & less disinfectant smelling. I decided to do a liitle experimenting & I bought some grapefruit & verbena oils in Thailand and layered them over some sandalwood and a clean musk to scent my body cream. I love it! Yes, once again it's Bibi's endless fascination with the floral/woods/musk combo, but it works for me! Any sort of floral seems to work in this combo for me so the possibilities are endless!

@Bibi
You're right about missing the floral scent of plums. There's a variety here that starts off yellow and eventually goes bright red called, "Sunset" and they're only around for a very short time. The fragrance that comes off a bowl of them on the table is incredible-sweet, floral, deep-if someone could capture that it would sell like hotcakes.

I like the sound of grapefruit and verbena with sandalwood and musk. Sandalwood needs something to keep it from smelling like incense, and I should think grapefruit would do it.

@Veronica
Have fun! Hope you find some Femme.
I have no idea if my nose is a blessing or a curse, but I've been like this since early childhood. It was great for my mum-she could drop me off at a perfume counter and I'd stay busy until she was finished shopping.

Okay, once I got past the "elderly sex" remarks and stopped snorting tea through my nose...I began wondering if there's such a thing as a "fragrance reference kit"? A sort of junior scent-mixer kit that contains tiny vials of smells, eg., aldehydes -- ylang ylang? I'm familiar with most of the florals, of course, but the difference between civet and musk? Wet tomcat vs. dry tomcat?

Don't try creating your own buteric acid with a pat of rotting butter in a jar. Ours will be "celebrating" a one year anniversary soon. Strangely, it hasn't melted or lost shape, only turning brown around the edges. Interesting what an airtight environment can achieve.

Hmm. I've been shying away from this because of the cumin, but maybe I should give it another go. And not think of Jerry and Rupert. (Ew. Not because he's old, but because he's *him*.)

@Mim
The vintage might suit your tastes better if you're worried about it. There's cumin, but not nearly as much. It is rather inexpensive though, if you hate it.

Oh how I wish there were an easier way to ship perfume to the UK, because I have more than I will ever wear. We really should look into it because how hazardous can a 1 ml vial of perfume be?