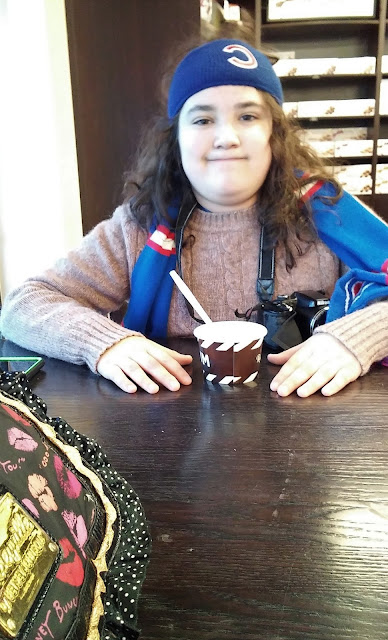 Danny finished his last nut challenge at the allergist today and is officially not allergic to peanuts or tree nuts. We celebrated by taking him out for ice cream, which is something he hasn't been able to do for 10 years due to cross-contamination fears.

He was incredibly lucky. Given the severity of his initial reaction, and the subsequent positive scratch tests, we never imagined he wouldn't be allergic to nuts. His former allergist didn't want to do a challenge, but when we switched doctors last year, it was brought up immediately. We didn't expect much, but here we are. That's not to say all scratch tests are false positives-I know for certain cashews and pistachios are deadly for me, but I have had reactions where I knew exactly what I had ingested-with Danny it was always uncertain. We'll never know what it was, but we now know what it wasn't.

We haven't eaten in a restaurant in ten years. I grew up seeing enough kitchens to know that the only nut-safe environment is a nut-free one.  Same for bakeries, food produced in facilities with nuts, etc. Basically, we've made everything ourselves, and relied on cheese and fruit when travelling. It can be done, and I suspect once Danny finds out how awful most commercially processed food is, he'll want to cook for himself again-but for now an exciting array of options is open to him. 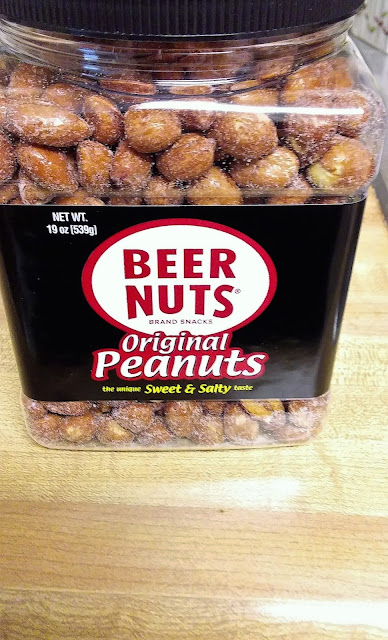 It felt very strange buying these for him! When we were at the allergist's, I had to watch him eating spoonfuls of peanut and almond butter, and each time I winced as he raised the spoon to his mouth. After a decade of avoidance it will be strange seeing him eat without fear, and obsessive label checking.

I might not have gone the homeschooling route had I known he wasn't nut allergic (we lived in a very small town that would have had a hard time adjusting to one nut-allergic kid at school) but I don't regret it. We've spent more time together than most parents and children, and a good deal of that has been in the kitchen learning to take care of himself. I know Danny can shop, budget, and cook decently which as an older mother gives me one less thing to worry about. When my mum died, I didn't know how to do anything from boiling an egg to a load of laundry. If nothing else, he'll be ready to live on his own when I kick him out on his 18th birthday.

You really don't want to know how much money I dropped at World Market buying him exotic foodstuffs today. At least the Christmas items were 50% off! He might have to fight me for the penguin bars and stroopwafels😊.

I am going to continue posting nut-free alternatives to recipes as I get so many comments and emails telling me it is helpful. I've lived with a tree nut allergy since the 60's, but it was only when Danny was diagnosed that I took it as seriously as I should. I now know most of my reactions, when I swore I hadn't eaten nuts was likely cross-contamination. We have better labeling these days, and better treatments than chewing an antihistamine which was always worse than throwing up from the nuts. As a result of Danny's misdiagnosis, I've taken much better care of myself.  The whole thing still feels slightly unreal, but after 10 years of living in fear, it is a great relief.

I can only imagine how weird it must be to suddenly not have to worry!

yay to ice cream though good call on the first treat.

What wonderful news! That is one of the very best things I have heard this Holiday Season.
Hurrah! JanF

Whoa! I can only imagine the trepidation you felt watching Danny eat peanut butter!! But I am sure he is rejoicing at all the food he can now sample!!! Having eatten a lot of processed foods in the past year, I am reasonably sure hat once he samples processed food, he will go back to the made-from-scratch alternative.

But in the meantime, enjoy those penguin bars! And Happy New Year to the ETB fam!!!

I've always felt sorry those who has eating disorder (algeries) as I've got older I seem my stomach and digestion system don't handle food as well as it once did.
Coffee is on

YAY! About 20-25% of children allergic to peanuts grow out of it- maybe Danny was one of the lucky ones? Did your allergist not check Danny's peanut IgE? Allergies are weird anyways. mysteries abound!
Happy New Year!

Such good news!!! Bloody doctors some are just QUACKS!! I am visualising you turfing him out on his 18th!! You know sons are like homing pigeons aye, they keep coming back.

i´m so happy for you both!! totally understand that the relieve takes a while to sattle down. this will be a very happy new year for your family!!
xxxx

What an adventure this nut-free living has been for your family, Goody. Quite right, it's time to celebrate the end of the trip with food (what is a stroopwafel?) and drink, and a counting up the loot. So many learning experiences, his and yours; and so many kitchen skills and recipes acquired, his, yours and ours.

Dunno about his keeping 'clean', however. Just finished an argument with my rescue cats about eating the expensive 'pure' cat food an auntie gave them for Christmas. They like by-products!

What stunning news! I’m so happy Danny is safe from imminent nut death. A relief indeed, although I’m sure you’re feeling rather off-balance in many ways. You’ve been incredibly creative, patient, and devoted throughout this process; the discoveries you’ve made and the closeness you’ve cultivated with your family are remarkable. I say you’ve earned the right to send Danny to Swiss boarding school and spend the rest of your days in a haze of martinis and cashmere. Well done, you!!!

@Miss Magpie
I watched him eat a tin of mixed nuts today, and thought I was going to have a heart-attack! Turns out he really likes almonds, which at least have some nutritional value.

@Jan
Thank you. We are all very excited. We realised, he can now go to summer camp without worrying about accidental nut exposure.

@Thrifty Parka
Happy New year to you!
We took him out for pizza last evening for the first time, and he's just mesmerized by it all.

@Bibi
The first allergist didn't draw blood-and we didn't know about the various protein tests. Basically, we did what they told us. I never felt like the communication was great there, which was why we switched allergists. Once we had the all-clear from the bloodwork. the challenge made sense. It would be rare to grow out of both peanut and tree nut allergies, but it isn't impossible. We still have no clue what he reacted to initially. Happy New Year to you and yours!

@Sue
You have no idea how angry I am about waiting ten years to do a test they never told us existed. Anyway, I won't dwell on it because I'm just so relieved with where we are now.

@Beate
I am going to need to un-learn some of the overprotective behaviours I've been employing these past years. Have a happy New Year.

@Vix
It's funny, he wasn't crazy for peanut butter, but he's completely in love with roasted almonds. So many foods that don't contain nuts are made in places that use them for other things, so now he can buy something as simple as a loaf of bread from a bakery. I was teasing him that now Christmas is over, I can buy him a discounted nut roast for a "real" vegetarian Christmas. He scowled at me! Teenagers.

@Beth
We are all very happy.
A Stroopwaffel is a waffle shaped wafer topped with caramel and chocolate-sort of looks like a moonpie. You warm them atop your mug of coffee before eating. They come in different flavours-we bought the chocolate/cinnamon/vanilla combo because that's what mummy likes! The only brand you can get around us is Daelmans, but they're kind of the classic Dutch export anyway. I'd be happy to send you a box if you'd like. They're delicious.

@Propagatrix
Thank you, that is very kind to say. I can't afford a Swiss boarding school, but I could probably swing a bus ticket to Oakland for him :). Hey, it could work...he knows how to cook! Happy New Year!

@Ann
I also bought him a bar of Cote D' Or chocolate. I'd say you're having an influence on my shopping habits!

Hoorah for Danny being able to eat out more. That'll be a big load off your mind. Or possibly a big worry, now he can eat all the rubbish he likes!

@Veronica
Thank you. I am so very happy for both of us right now.

@Mim
As he said to me after downing three doughnuts, "I'm going to just keep going until I get gout."
I'm not sure he's kidding. The most counter-culture thing you can do these days is refuse to go on a diet in January (or at all).

I'm so delighted about this for you! Don't forget you still have to be careful, though!