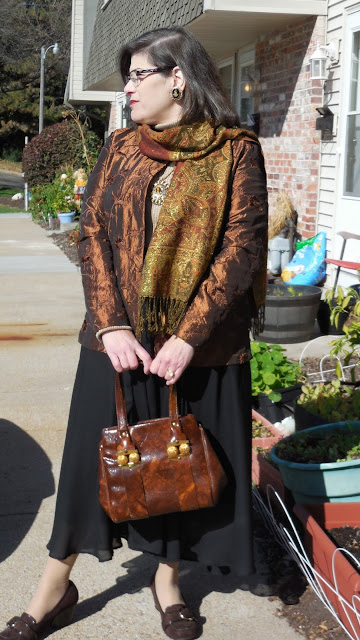 I joked with Danny that this jacket makes me feel like a Quality Street. I have a copper coloured skirt in a similar material but, I thought better of it and offset the look with a matte skirt. A little shimmer is nice, but easy to over-do.

I put fleeces over the garden beds last night, and though we came close, the promised frost never did matetrialise. We have the same forecast tonight, so I'll do the routine again, but so far we've had an unseasonably warm autumn. I still have nasturtiums blooming.

We stopped at the Friends of the Library book sale today, and dropped off some of the homemade Twix biscuits. Everyone was commenting how tall Danny has grown, and that they've known him since he was an infant.
"You're like family" I told the volunteers, "But better. We don't actually like my family." 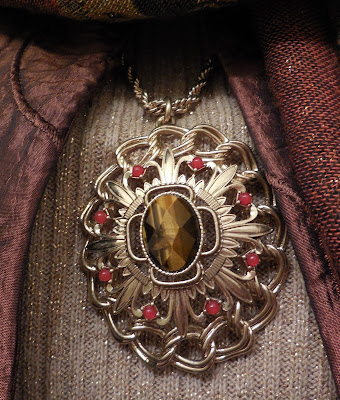 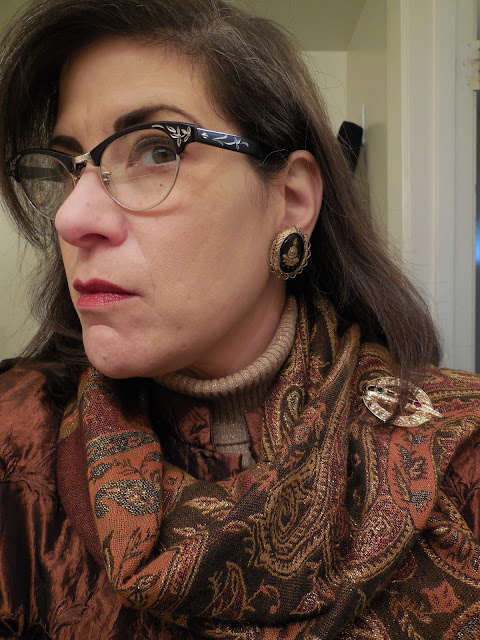 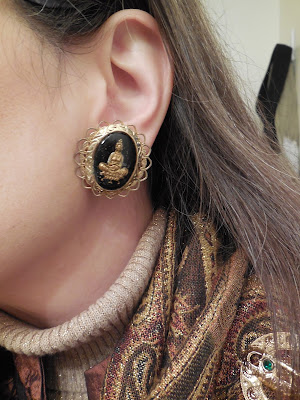 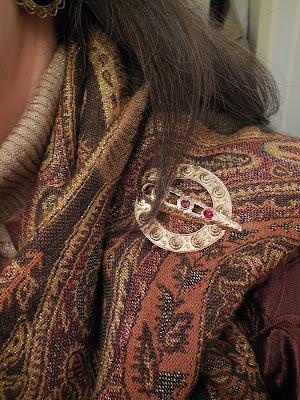 The squirrels have been trying to raid the birdfeeders as the weather is changing and they're starting to panic. I bought a "squirrel-proof feeder" that slides up a door to block the seed when anything heavier than a bird sits on it. Blondin has been giving me the evil eye, but I couldn't be cleaning up spilled seed every day. Not to worry, he still gets his ration, but I had to stop him (and his friends) from their bad behaviour.

The first Dark Eyed Juncos have arrived. They won't eat from the feeders preferring instead to take the seed that has fallen to the ground-if the squirrels don't get it first.

Love those Autumnal hues on you!
Absolutely love metallic accent pieces as they go so well with my Indian wardrobe.
I was looking for a light raincoat in some metallic hue when I was in Florida. I found 3 on Travelsmith that I liked & measured myself for the 'perfect' size according to their size chart - but alas, when they arrived - one was WAY too big, one was a little too small, & the last one was so ridiculously short it wouldn't have kept much rain off. I wasn't in Florida long enough to do an size exchange by mail. Not many raincoats on offer in Florida in September.
I tried a few Burberry fragrances in Florida, my impressions- very simple (yet not linear), very good quality, nothing showy or complex, most seemed clean & crisp or soft & romantic.
On weather here in Nepal- In these little Himalayan valleys around (2,000- 4,000ft in elevation) it is truly 'Shangri-La'. October through March is our peak tourist season at it is mild & DRY. We might have 2-3 light frosts late December through January (Like 32F to 30F), but otherwise it is clear, mild & sunny, & stays around 65F-75F during the day. I can easily grow Spring & Fall flowers & vegetables Oct. through March here. My papayas and bananas are still bearing fruit.
Now if you go up to 5,000 ft & up then you're going to start seeing see snow. (It is snowing now in my husband's native Kashmir valley which is at 5,500 ft) Right now they're bringing apples & pears from the higher elevations down to our valley- incredible mixes of Asian & western varieties. October is when they bring livestock down from pasturing all summer in the higher elevations- long haired sheep & goats, cows, gaurs, naks (cross between yaks & cows), & ponies. Most of these goats are sacrificed or slaughtered in October for Deshain & Deepawali festivals (sort of like Xmas & Thanksgiving all rolled into one) as well as wedding feasts. You'll even see Kiangs (Tibetan wild ass) wandering around my town as the snows start up higher in the Himalayas. Yaks come down to around 11,000ft from their highland pastures of around 14,000ft.
So if you want to go trekking/paragliding/whatever at lower elevations come to Nepal October through March when it is mild & dry rather than hot & wet. If you want to begin your ascent of Mt Everest or one of the high peaks of the Annapurnas then start your journey in March - April, usually the weather is clear enough to ascend the peaks for about 2 weeks in mid May.

SNAP!! I have Nasturtiums growing too, how cool is that, northern and southern hemispheres in tune via our gardens!! You really suit Autumnal colours, and you look so cosy. I hear you on the relatives, thank god we can choose our friends huh.

Are those little buddhas on your earrings?

Mmm, Quality Street. A sure sign that Christmas approaches.

Hmmm. I'd like to pair that coppery jacket with a brown velour that almost matches your shoes. Or maybe the scarf worn as a sparkly shawl. Know what you mean about too much sparkle -- but without it dark crepes and velours make one look like a rodent.

My front porch herb planter still sports holy basil with flowers, while the front flower bed has a new crop of borage and giant mulleins. Very odd fall weather here in the Midwest.

Halloween is my favorite holiday: an excellent opportunity to crawl into one's home sweet cave, lock the doors, light the candles, eat something sweet and drink something hot, and reflect. Or not. Sometimes the weirdness without is better left without.

If your neck permits, do have a look at the Venus, Mars and Jupiter alignment in the morning sky. Not rare, really, but pretty!

@Bibi
It really does sound beautiful where you're at.

The newer Burberry fragrances don't interest me (Danny has Burberry Brit, and he likes it)but that original women's perfume from the 90's is magical. It has a peach that manages to be bright and dense like rotting meat at the same time. In a nice way, of course.

Metallic raincoats were everywhere for a while-I wonder what happened? I had a nice one years ago until I leaned on something at the subway and some cleaning solvent (or god knows what) ate clear through it! If you find one, keep clear of mysterious substances on subway benches.

@Sue
Do you use the nasturtiums in salads? I like to feed my family flowers so they can get in touch with their inner hunter-gatherers (or something like that). I've been tearing up the petals in salads as well since they add a nice spicy flavour. The larger petals can be quickly blanched and then used to hold fillings and get rolled-up like dolmas. I'm going to bring the pots inside to over-winter in a sunny window. Hopefully they'll stay alive, even if they don't flower.

@Mim
Yep, they're Buddhas. For someone that isn't religious, I seem to keep acquiring religious items.

@Beth
You just reminded me that I own a pair of brown velvet culottes. I should unpack them as velvet season is now upon us. Thanks for the reminder.