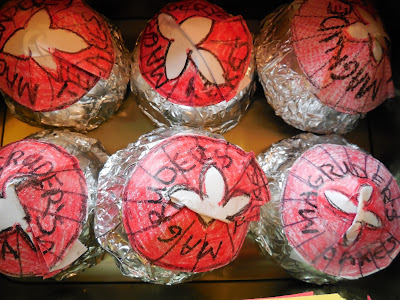 It turned out the Tunnock's Tea Cakes were unsuitable for people with nut allergies. That was a bummer, so I made Danny some homemade ones. Obviously, they're not Tunnock's...they're Margruder's. 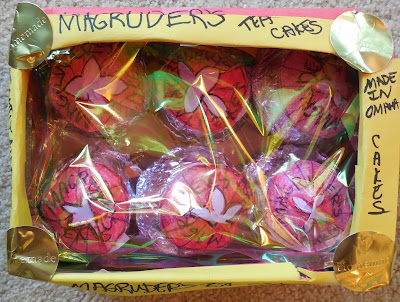 I improvised a half-assed version of a box too.  Could have been neater. 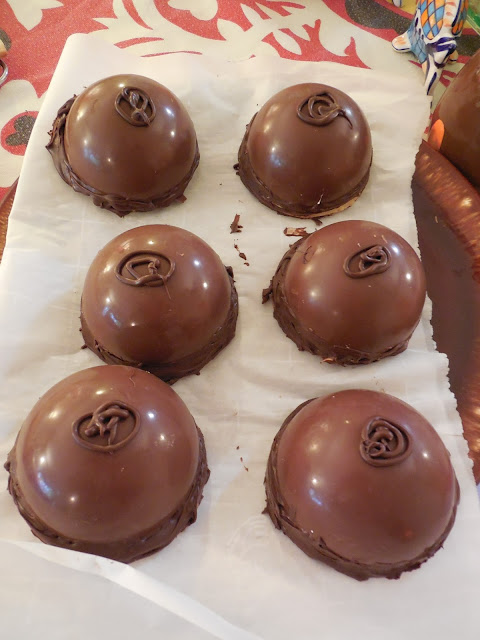 These were easy to do. Using sillicone moulds, I brushed them with chocolate, and when solid, I carefully removed them, and filled the interior with marshmallow fluff. I then affixed it to a shortbread that I cut with a glass to get just the right size. I piped them sealed with more melted chocolate, and that was that. 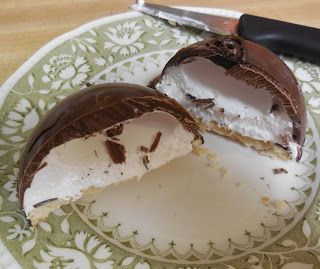 Not exactly the same, but good enough. I also made some homemade Twix bars with the same shortbread cut into logs and topped with caramel and chocolate. Those took all day to make (because I had to make the caramel) but it was worth it. Nut allergies are a drag, but it really is possible to make "faux" versions of popular junk food at home. I have my priorities (and they don't include laundry, mopping the floors, or dusting).

Now, for the Haunted part... 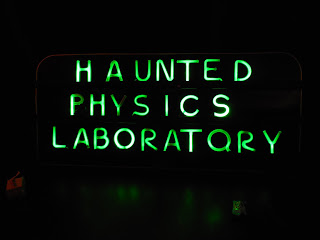 Every year, the physics department at Creighton University puts on the Haunted Physics Lab. 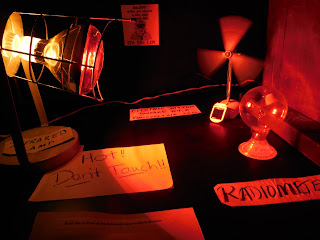 There's a couple dozen stations to show various laws of physics at work. 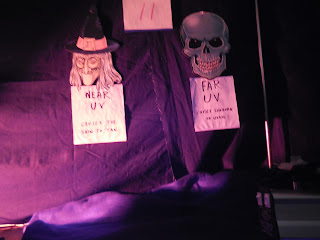 The exhibits don't change much year to year, but we love going anyway. 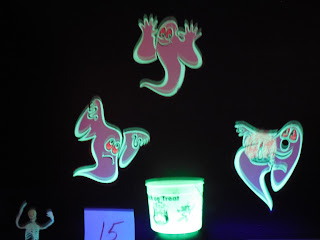 There's plenty to do, scary music, black lights, and graduate students you can stump with your questions. 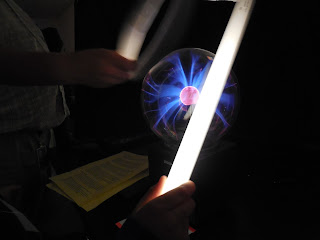 Whoa, I just lit that bulb up by waving it past that thing. Cool, man. 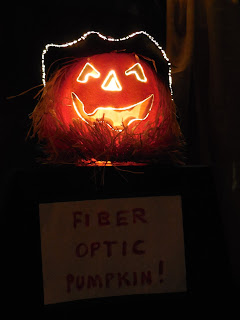 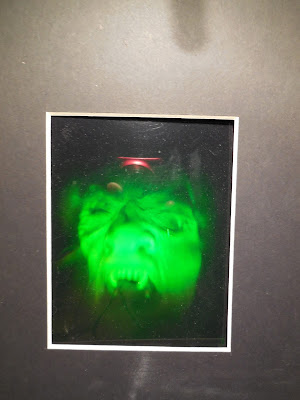 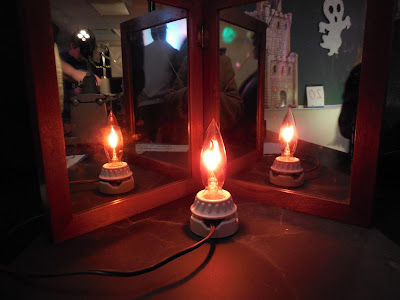 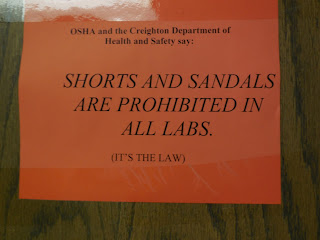 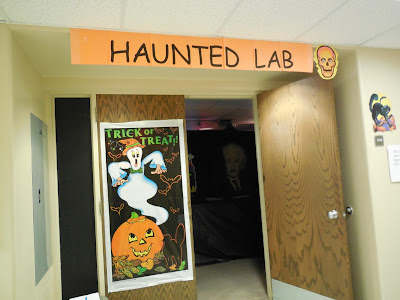 Even in the Haunted Lab. 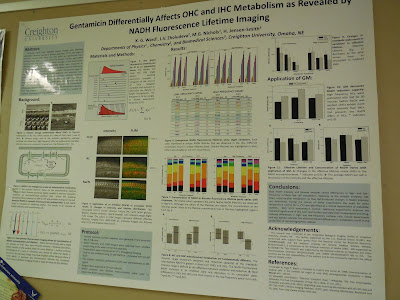 Reading the posters in the physics department will instantly make you feel like an idiot. Are there really people that understand that shit? 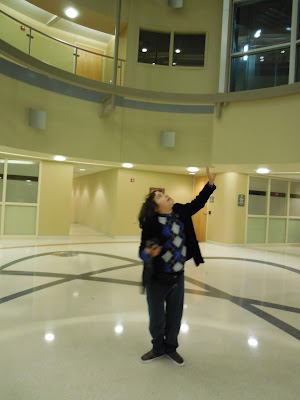 The science building is quite beautiful... 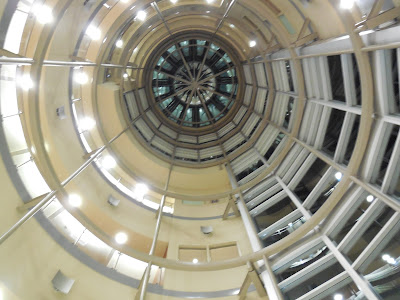 My 14 yr old son would be all over that physics lab- he's our "Mr Wizard". That's an interesting poster on the ancient (but still super potent) antibiotic gentamicin's effect on OHC & IHC metabolism.
It's our 1st chilly morning here! It's 62F/17C & drizzling! The Sheikh put on his new LLBean sweater, Allagash bison loafers & matching belt with his 501's after thoroughly dousing himself in Gendarme this morning- I can just hear him proudly announcing to all the Desis, "You can only buy deees in US!!!"
Those teacakes look absolutely delicious. Your homemade KitKats sound like millionaire's shortbread. I made pumpkin bread yesterday, it must have been good because it is all gone this morning!

That lab looks like fun! I have some steampunk friends who make robotic things, and even though I don't understand how they do it, it's still really inspiring.

For a taste of those teacakes, I'd don a white sheet and a plastic pumpkin bucket and join Blondin on the balcony squeaking, "Feed us!" I'm intrigued by your mastery of marshmallow fluff and melted chocolate. Do you have a chilled marble slab...(cue spooky organ music)?

Creighton University is evidently blessed by people who understand the math of architecture as "the measure of the man." The tower is a wonderful mandala, as entertaining as the visual FX in the Haunted Lab, yet it's not at all overwhelming.

And now a treat for you, my pet Halloween tale. Once upon a time, a neighbor went the rounds of the houses in our rural area, carrying a handful of baby fluff and trailed by his little blonde daughter. He explained that Fuzzy Wuzzy was a wolf/dog and did we object? Nope? Halloween rolls around, the door bell blings again, and I open it to see -- daughter wearing a red plastic rain cape and holding forth her Easter basket, Fuzzy standing beside her, wearing a lady's floral scarf as a shawl, a Zsa Zsa Gabor wig topped with glasses, and a sign on his collar stating the obvious "Grandma". (Fuzzy grew to full size. Fortunately, he was ruled by the leader of the pack, a fat spaniel named Saundra.)

@Bibi
Do you get the extreme winter weather in your part of Nepal, or is that just high in the mountains?
Pumpkin bread (with a pumpkin from your garden) sounds like heaven.

@Mim
If you have friends that can do that sort of thing you should insist they build you a hoverboard-it would be the ultimate cat-toy!

@Beth
That is a great story. Pets will put up with just about anything for the people that feed them. Poor wolf, how humiliating.