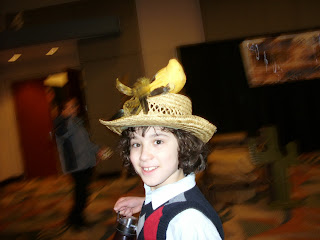 The fair was terrible. Because there were so few entrants in canning categories, they just awarded "Participation" ribbons, rather than an award to a single winner for each class. There weren't many ribbons. There were a few blue ribbons for pickles and jam-everything else was a wash. Danny was the only person in his class, so he came home with a participation ribbon-or rather he will because we need to go back tomorrow when they release the projects. It was much the same with baked goods-not a kolache or pie in sight. A poppyseed cake won.

Yeah, I'd look sad too. Nice work, Knights of Ak-Sar-Ben! Way to fuck up a fair. Maybe a total of ten jars? A cynical person might feel a bit scammed, like they knew most of those categories were going to be single entrants. This is not a "division." This, is a "few jars." I'm really annoyed. Again, I'm sure a good number of people just gave up trying to make sense of all the conflicting instructions. 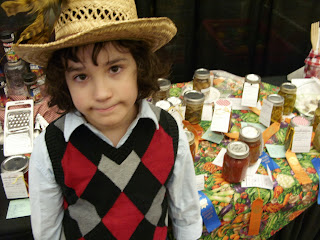 Part of the problem was how disorganised the fair was. We had to call three different offices, got three different answers, and ended up paying the entry fee twice because one hand didn't know what the other was doing. The website had different dates from the booklet, and then they sent you more (different) information in the post. It was really maddening. The fair is really just an adjunct to the rodeo, which is where they put their efforts and money. I can see why there were so few participants-we wouldn't do this one again. My heart really went out to the person with the beautiful hand stitched quilt that lost a first prize ribbon to someone that cut fringe on a yard of fleece. How that ended up competing in the same class is beyond me.

The one bright spot (at least it made me laugh) was the person who entered the cake decorating with their take on The Exorcist. That should have won first prize. I've made  some crazy cakes in my day, but nothing on that scale. Well done! 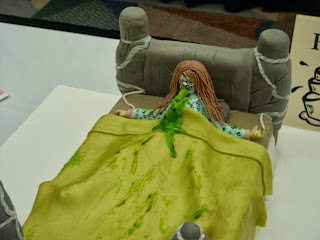 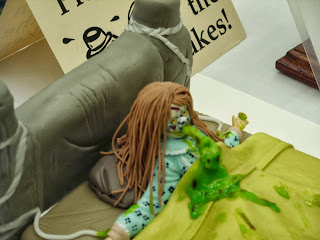 Add to this the shit-kickers attending the rodeo giving everyone that looked "city" the stink eye, and I was ready to be done. Done. Except I'm not because I have to go back tomorrow, pay another $8.00 for parking, and pick up the ever-so-special, participation ribbon. I really feel if they don't have enough entries in a category you should get your entry fee back, but I'm sure no one would know who was supposed to make that decision.

We came home and planted out our garlic and tulips for next year. At least that was a good use of time.