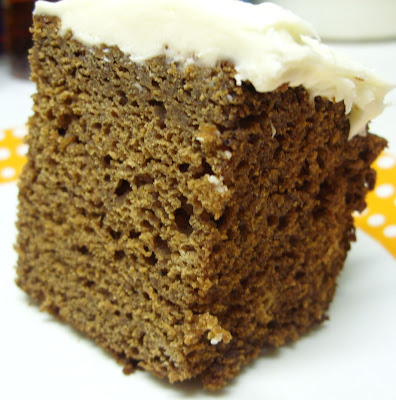 "At The Sign of the Tea Kettle and Tabby Cat."

The Wenham tea house in Wenham, Mass. was one of my very favourite places. By tea-room standards, the place was somewhat spartan, but the tea was excellent, the sandwiches strange, and I spent many happy afternoons there. Before we moved, I dragged Mr. ETB up there to purchase a copy of the tea room cookbook. A decade later, I still hadn't baked anything from it. Today, I did.

The tea house was a project of the Wenham Improvement Society, and has been in operation since 1912. As far as I know, it is still there, but if it is not, please don't tell me.

This is a very substantial gingerbread. I ended-up using a mixture of full-flavour molasses, Blackstrap molasses, and Golden Syrup because I thought all Blackstrap would be inedible. I also took the step of frosting it with a cream cheese frosting which offset the strong flavour. The strange thing is-the boys loved it. Dense, strongly flavoured, and rich with spices, I didn't think they would go for it. Shows how much I know. The cake is large, so I froze half (unfrosted) and plan to use it with a ginger custard at some point as a trifle. This seems like a reasonable cake to have on hand through the holidays. You could obviously skip the frosting and just dust it with icing sugar before serving.

Sift flour, and spices together. Cream butter and sugar until light. Add molasses, and mix well. Add eggs one at a time beating well after each. Stir in baking soda and boiling water. Add flour mixture and mix well. Pour into a greased and floured 9x13 pan. Bake in a preheated 350 degree F. oven for 45-55 minutes. Cool before frosting, or dusting with icing sugar. Makes a very large cake.
Posted by Goody at 6:04 PM
Labels: blackstrap molasses, Massachusetts, Vintage Recipes, Wenham