I Got a Bad Case of the Soave Bolla 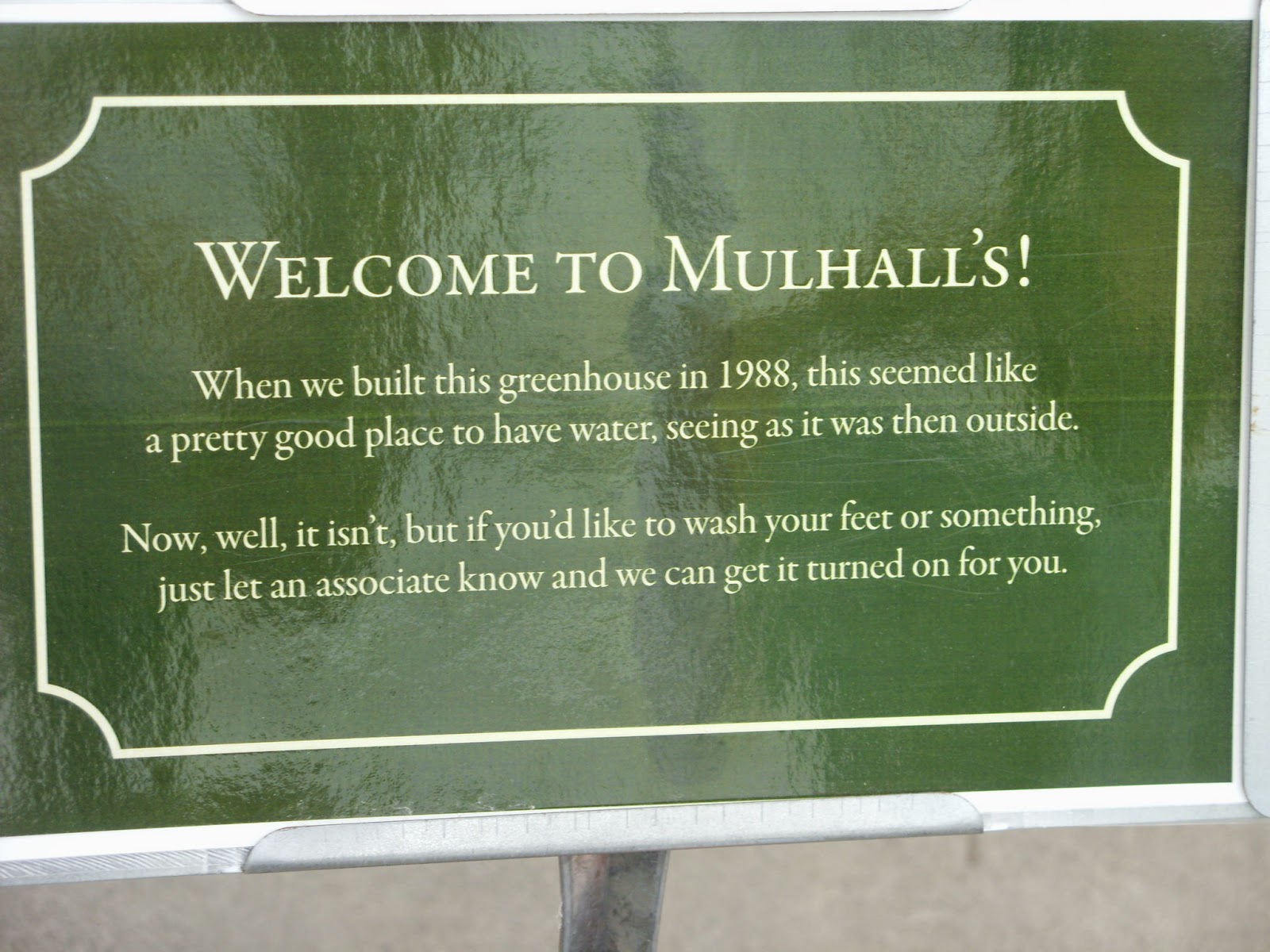 They all know me there, so I wasn't embarrassed to be seen taking photographs. I don't think anyone has taken them up on the bathing offer...yet.
I've been feeling under the weather. Danny kept asking excitedly if maybe I had the first US case of Ebola, but unfortunately (for him, because what could be more exciting than blood spurting out your mother's eyes?) I think it is more a case of the Soave Bolla, or lack of. Nothing a nice glass of wine wouldn't cure. In the meanwhile, we stopped at Mulhall's for more plants because I have a problem I needed more plants. Obviously. Why else would I buy two plants stands? Duh. 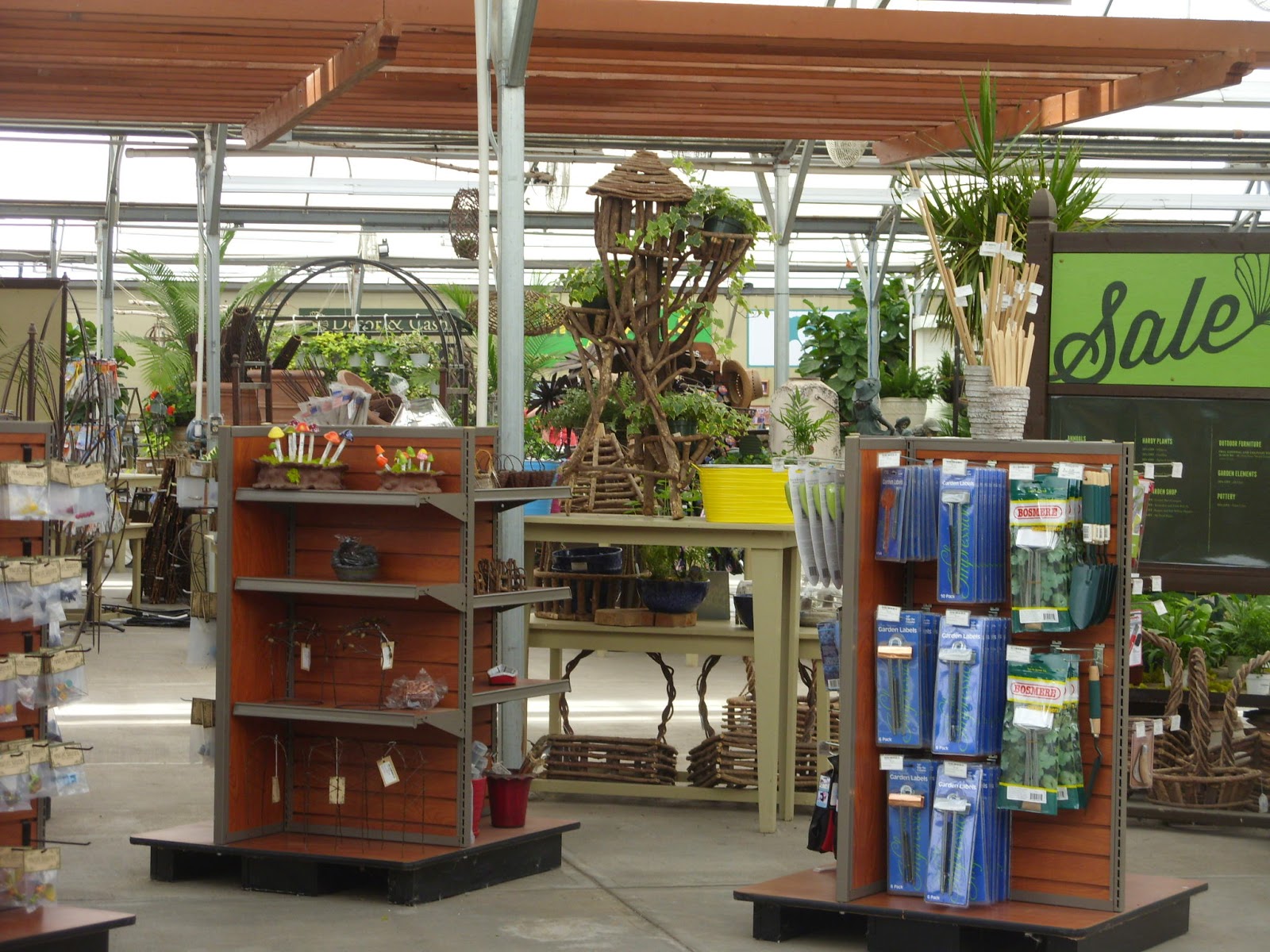 Ooooh, a SALE! Not that it helps with the furniture because it will still be a $5,000 dollar patio set, but if you were the wealthy sort of tightwad, the 30% might be the incentive you needed. I stuck to plants. One of the things I adore about this garden centre is how helpful the enablers staff are. They always point me to the unusual plants I'd never otherwise have heard of. Today, I came home with something called, (I swear to god, I'm NOT making this up) New Jersey Tea.  No, no,  not that sort of tea, the kind you drink. It is a herb from Colonial times people drank after we tossed the real stuff into Boston Harbor over taxes. I'm sure it has a Latin name, but I don't know it. Anyway, I bought one because I have no self control it sounded interesting. 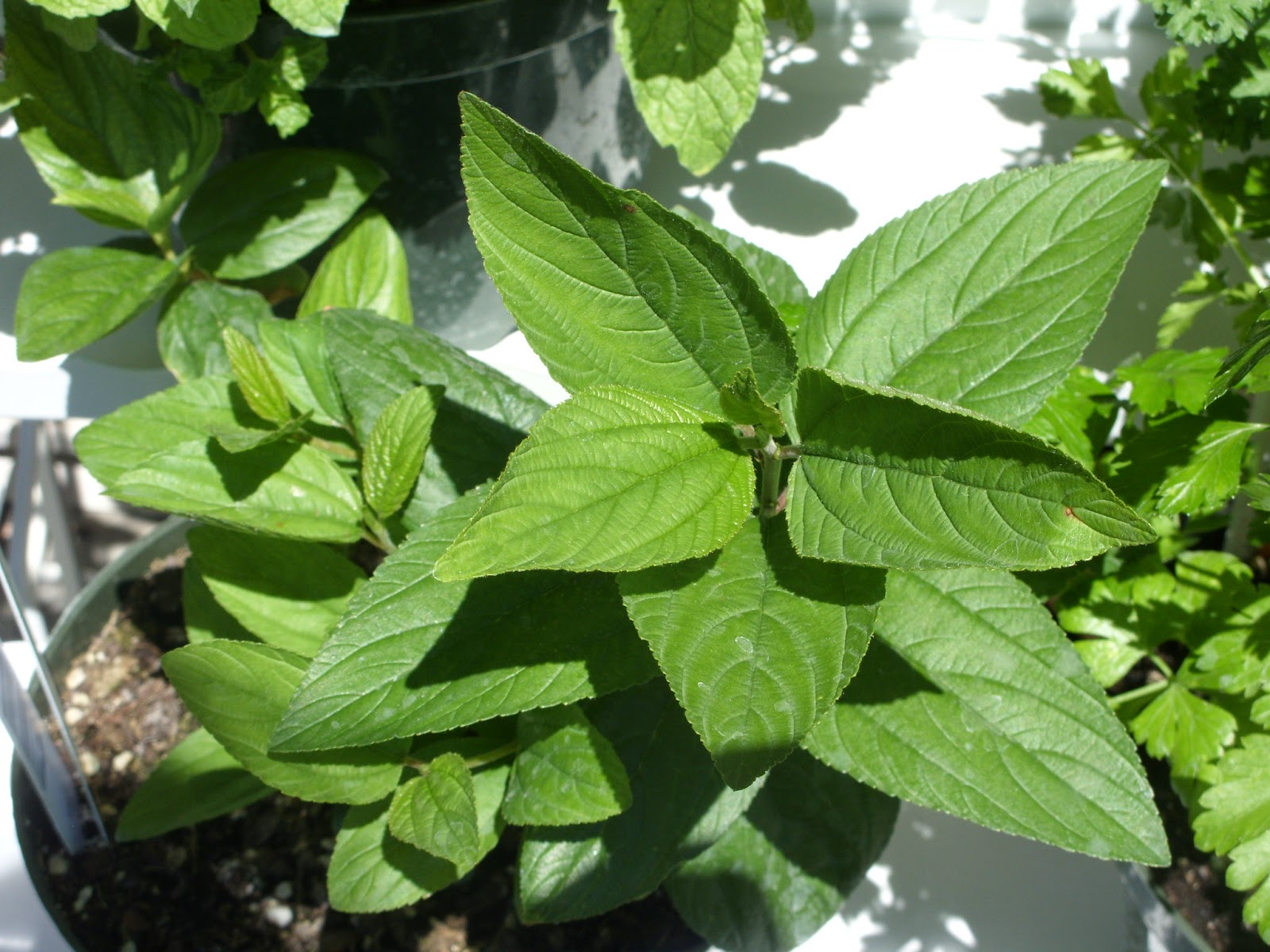 If nothing else, it is a pretty plant. It does flower, and go to seed so I'll have to keep an eye on it. 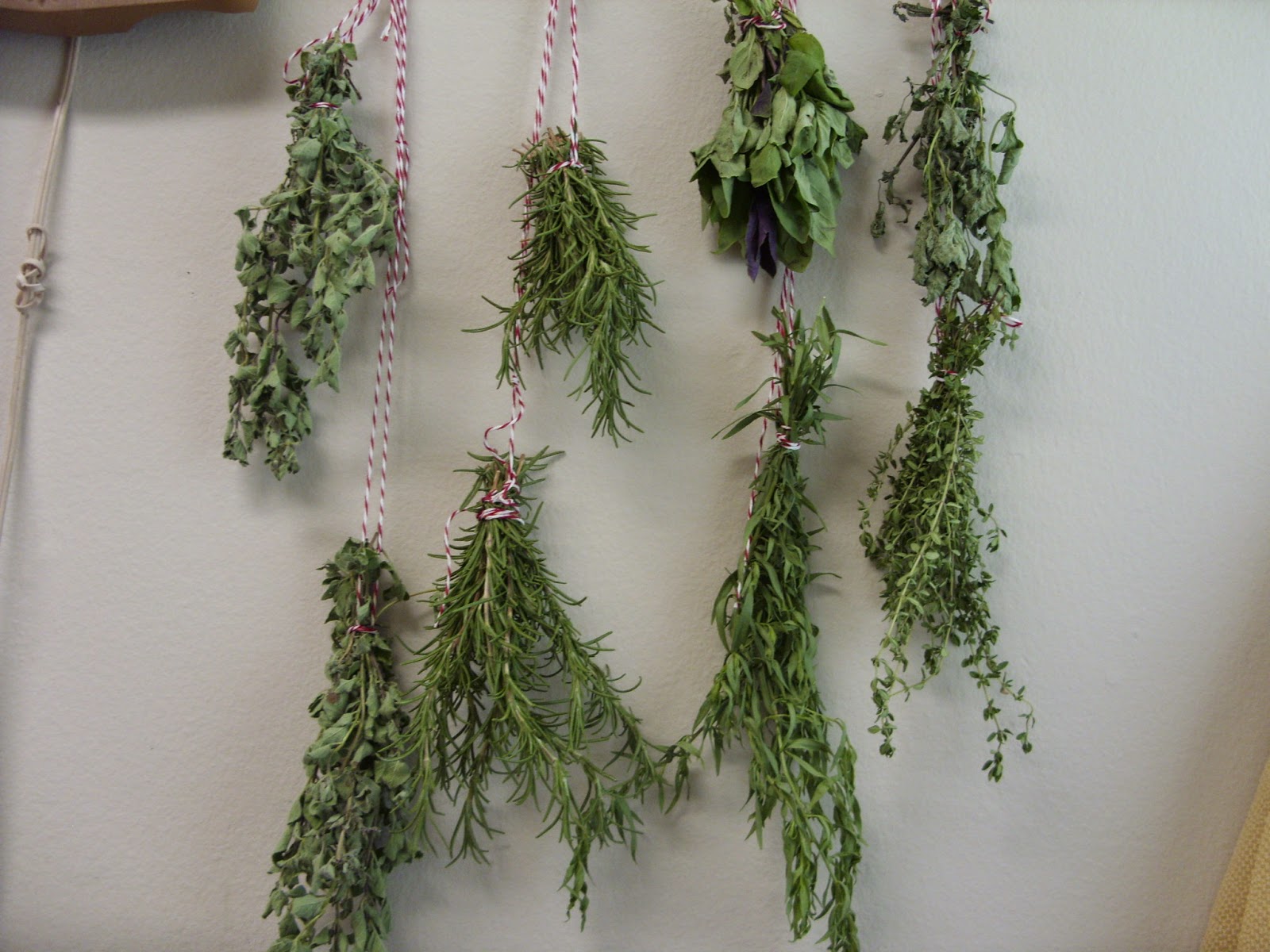 Here's the progress from the herb garden, which is taking over my life at the moment. I'm drying more than I will ever use, so I think it will get mixed into blends, put into attractive jars, and given as gifts. I'm getting about this much once a week, not counting what I snip to use in daily cooking. Madness, which makes this seem all the madder... 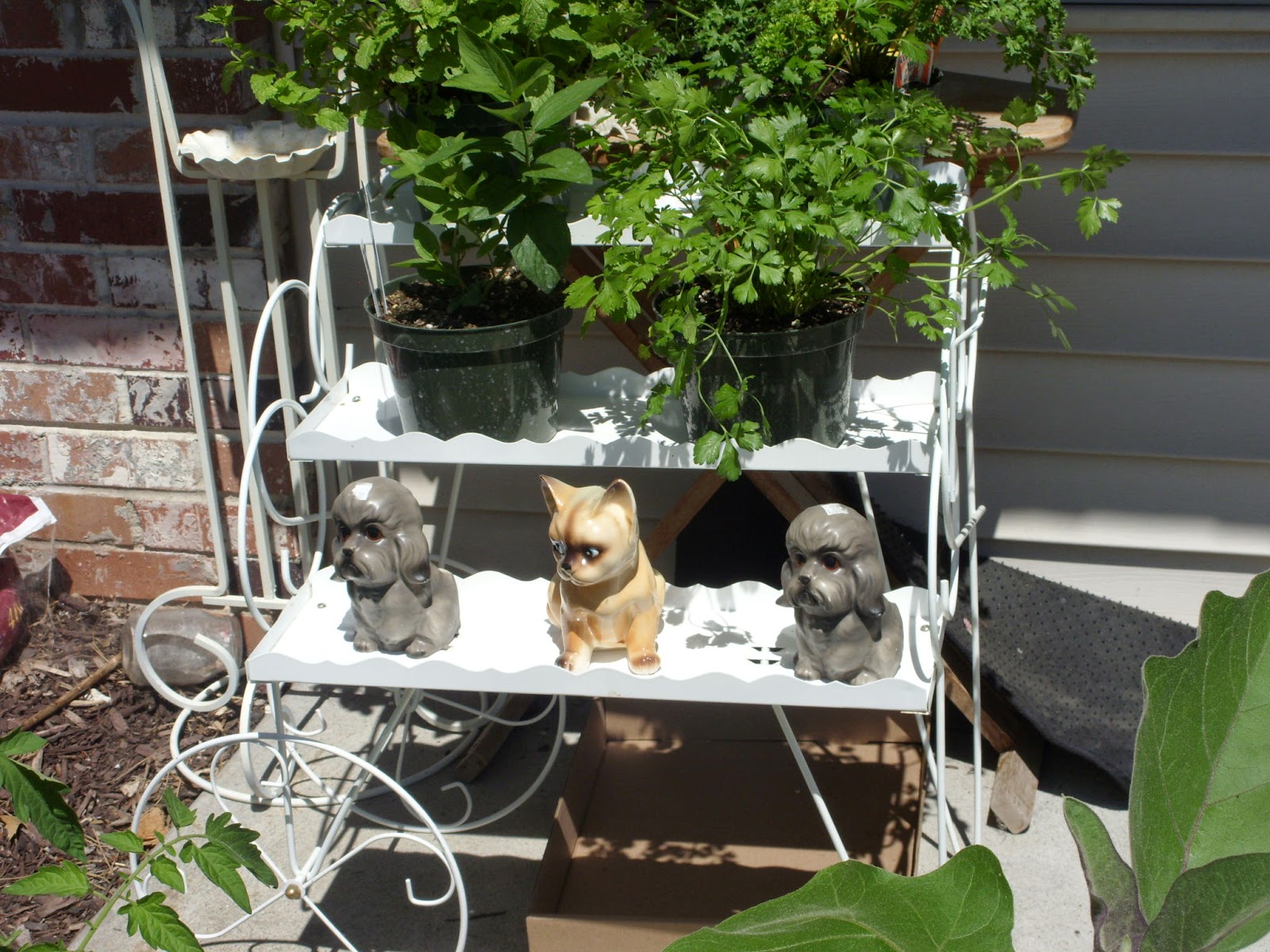 You didn't think I'd leave my favourite garden centre with just a single plant, did you? I bought some spearmint, Italian parsley, and curly parsley as well. The animal planters need something in them as well, so I suppose I'll have to head back later in the week. 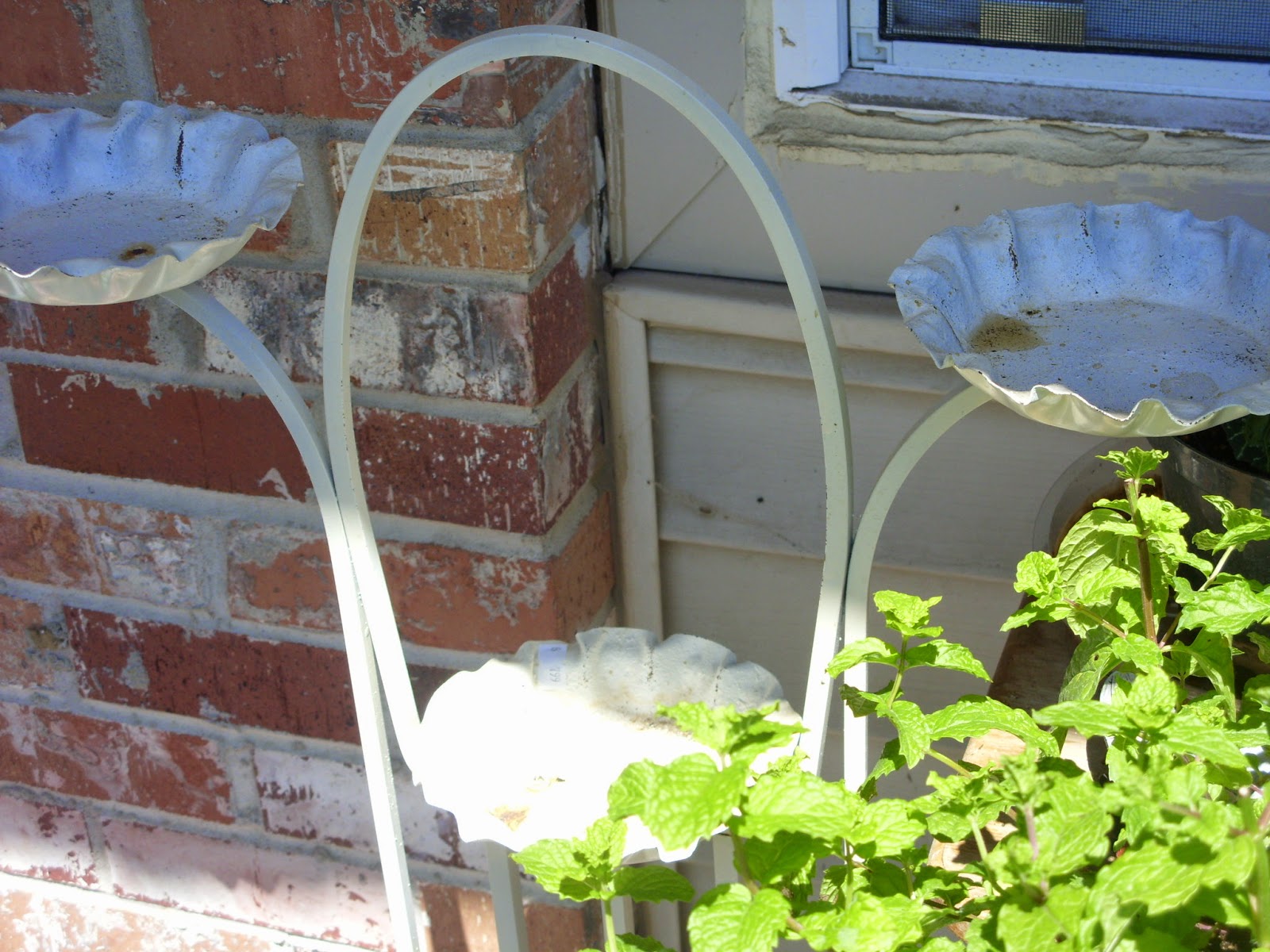 And this poor plant stand needs some colour as well. 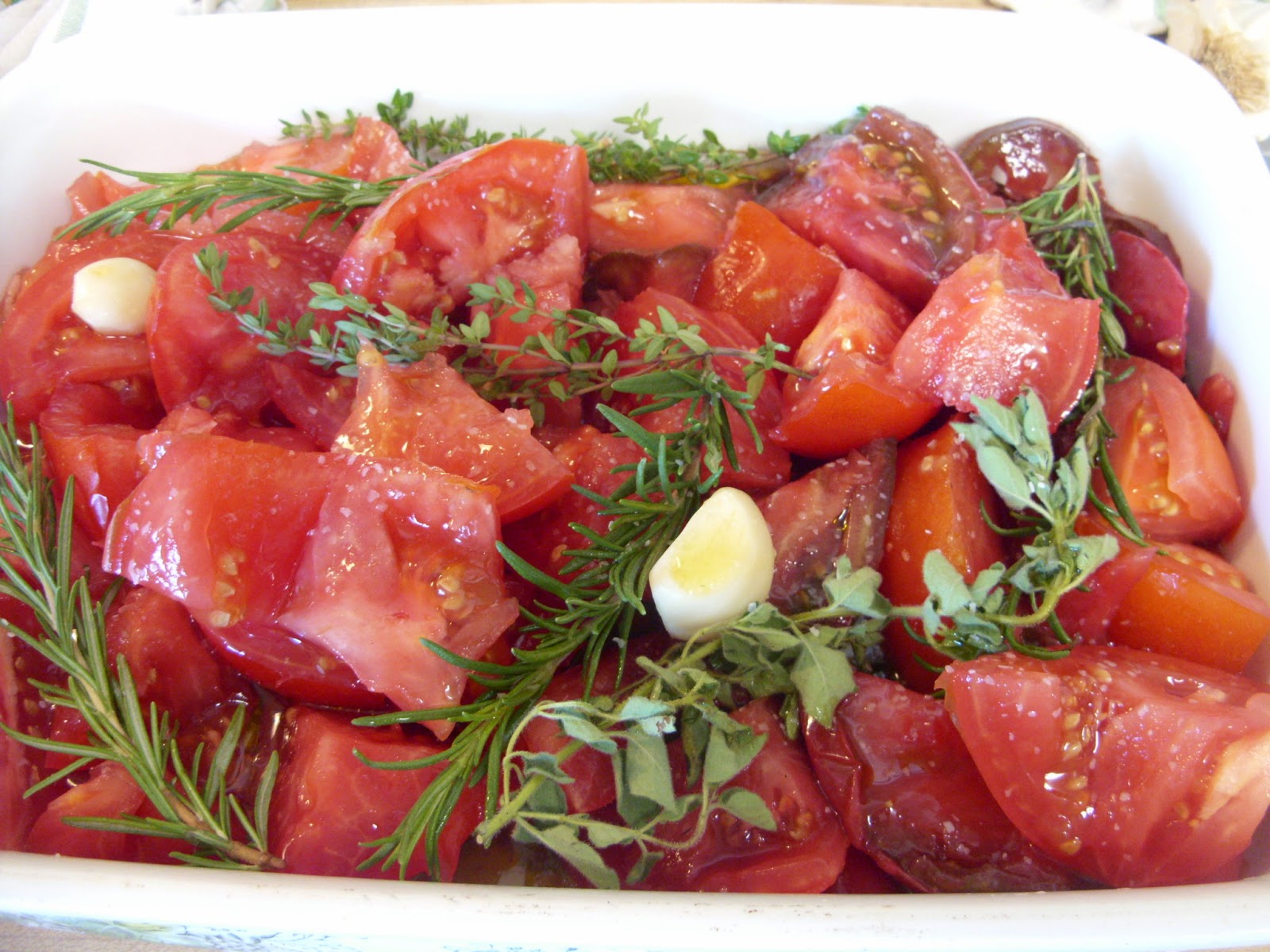 The tomatoes are coming along nicely, and this is a nice way to use up my garlic and herbs at the same time. I added a splash of olive oil, and a bit of salt, then slow roasted it until the tomatoes fell apart. After removing the herbs, it goes through the food processor, then a sieve and is returned to the pot to reduce. Meanwhile, I cooked down about a pound of mushrooms until they gave off their liquid, and added them to the sauce. At this point I think I will freeze the sauce for some evening in the winter when I need to remember why I do a garden each year. I have enough of everything to do a dozen more batches, but I have to leave some tomatoes for... 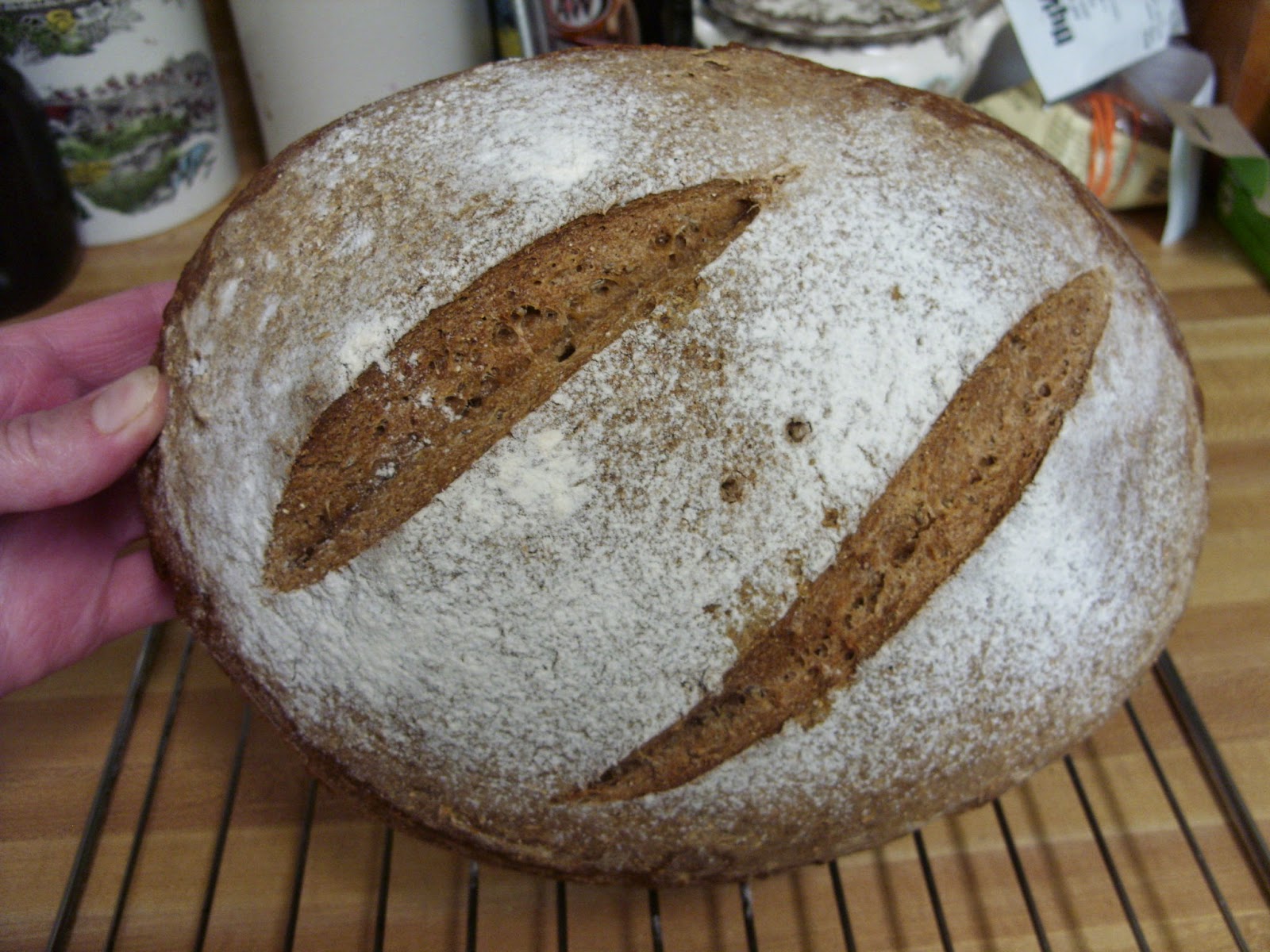 ...this sourdough rye I baked this morning. I have some herbed butter that will go beautifully for open-faced tomato sandwiches. I've been on a butter-making kick of late. No, I don't know why either.

The summer is winding down, but I can't help but try and get a bit more out of the warmth before it is gone. I'll do a cold frame over the raised bed for spinach and that sort of thing after the tomatoes are done, but it really isn't the same as picking a sun-warmed pepper to serve at dinner. Hopefully, we have a bit more growing time before the shortening of days becomes noticeable.

Until then, there's herbs to dry.

Posted by Goody at 1:00 PM
Labels: From My Garden, gardening, Herbs, Mullhall's, Omaha

I'm dryng herbs like a maniac too - reckon we'll do about 200 mint, lemon balm, elderflower and fennel teabags at the Food Festival. When do we get to find out if Danny is the jam king of Omaha?

The fair starts next week, but we're going for the last day on 1 September. I think the results are available on-line as soon as the judging takes place, but I thought that might take the fun out of it if he knew ahead of time, so I haven't mentioned it.

After the fair I'm driving him a bit south to Red Cloud and forcing him to take the "Willa Cather" tour of her old home, church, school, etc. If I have to pay for a rental car and a hotel room I want to get the most out of my two-day holiday, and make it educational. I did the tour a few years back (OK more than a decade ago, but she's been dead since the 40's, how much could have changed?)and it was interesting. He's read a few of her books, so it will have a bit of interest to see the places mentioned.

Good luck with your herbs. I might have to give-in and use the electric dehydrator, but I'd really rather dry them for free.

Your plant stands are very cool. I have a couple of plant stands, I love how I can display the plants. I tell a lie, I don't display, I just plop them on and hope for the best. Garden centres are a trap for me, I never get out the door empty handed, I obviously have a similar problem to yours. Ebola, Danny does make me laugh!!

Ebola-free, that's a relief then.
The garden centre sounds great, and I love your plant stands. Tell me how you get on with parsley, I have never managed to grow it, it dies on me.
Mmm, home-grown tomatoes are the best, whatever you do with them, and I reckon your home-baked bread will run them a close second. I want to come to your house for lunch please! xxxx

Yeah, me either...displaying is for the amateurs ;)

I can't keep parsley alive once it gets hot as it tends to bolt, or shrivel up and die. That doesn't stop me from trying (eternal optimist that I am) and I'm hoping that the SW exposure at this house will do wonders for it. Or I'll go back to Mulhall's and get more. This was the first year (touch wood) that I've kept chives flourishing, so perhaps there's hope for the parsley.

That's a really impressive loaf of bread! It looks so perfect.