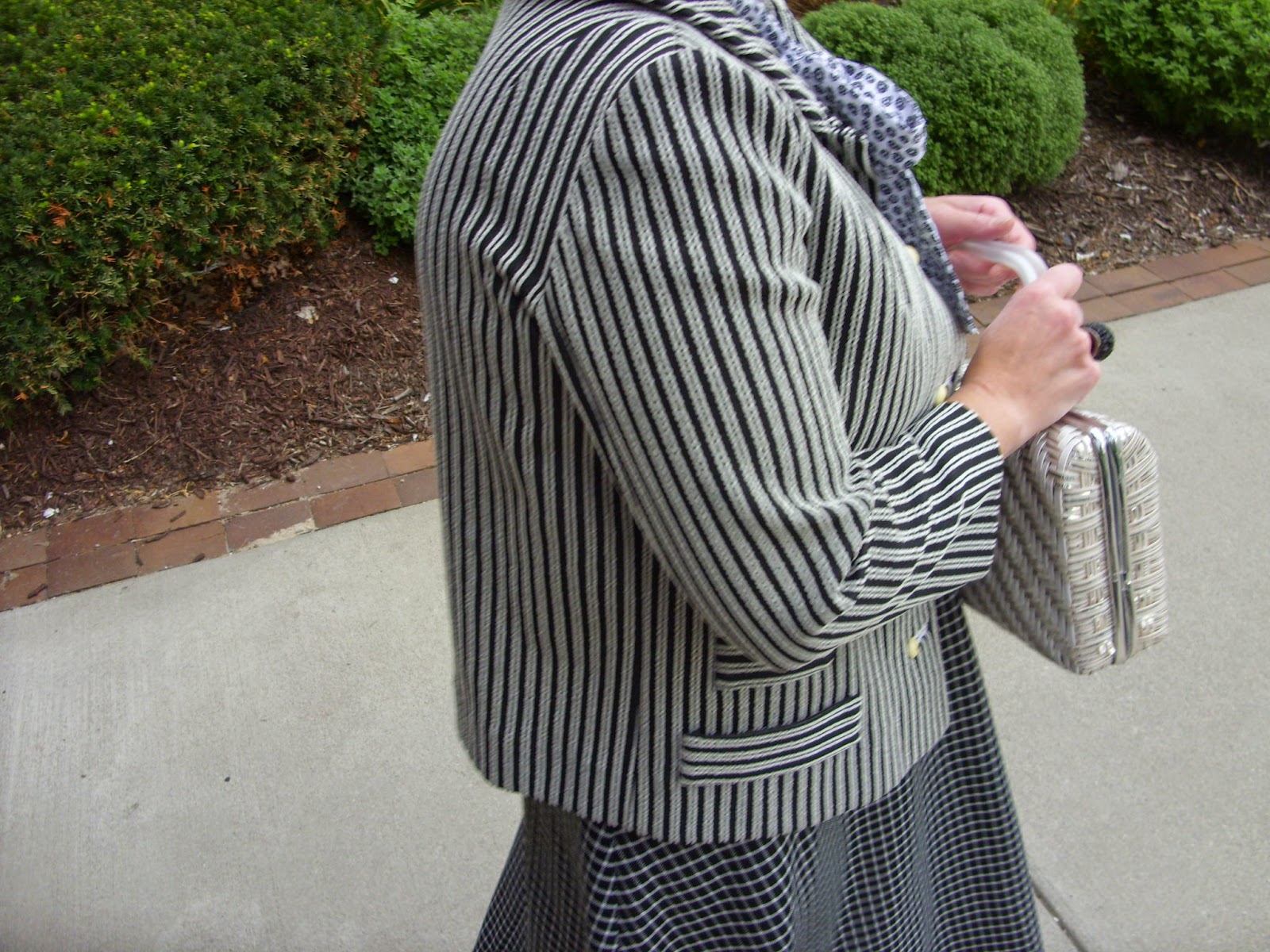 Well that was a shitty day. Oh sure, I was well dressed for my shitty day, but I still could have done without it. The trip to the dentist didn't make the day any less shitty, nor did having my bank account "compromised" (Their wording, which means they got hacked, and now my account is shut down until they send out new acct #'s, cards, etc. ). Oh, I could go on but when you've got this much successful pattern mixing on your person, it just seems pointless to go and ruin it with a glum face. 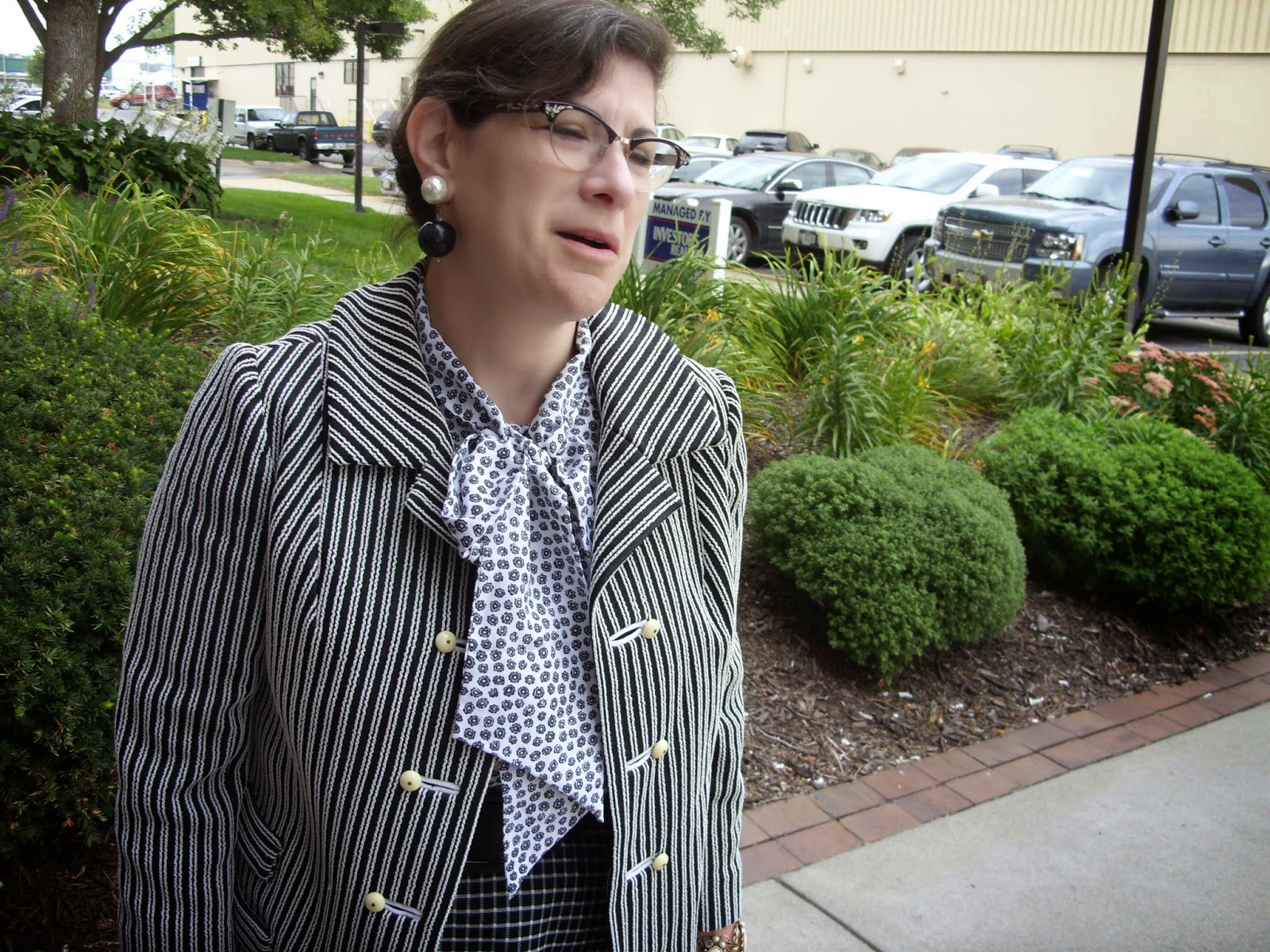 See what I mean? This was, in my defense immediately after the dentist. daaaaaamn, I'm in pain. Only one thing to do with a day like this-break out the giant edition of Better Homes and Gardens Our Best Recipes. "Buried Cherry Cookies" sound interesting. Chocolate? Cherries? Frosting? I won't be eating them so sure, why the hell not? 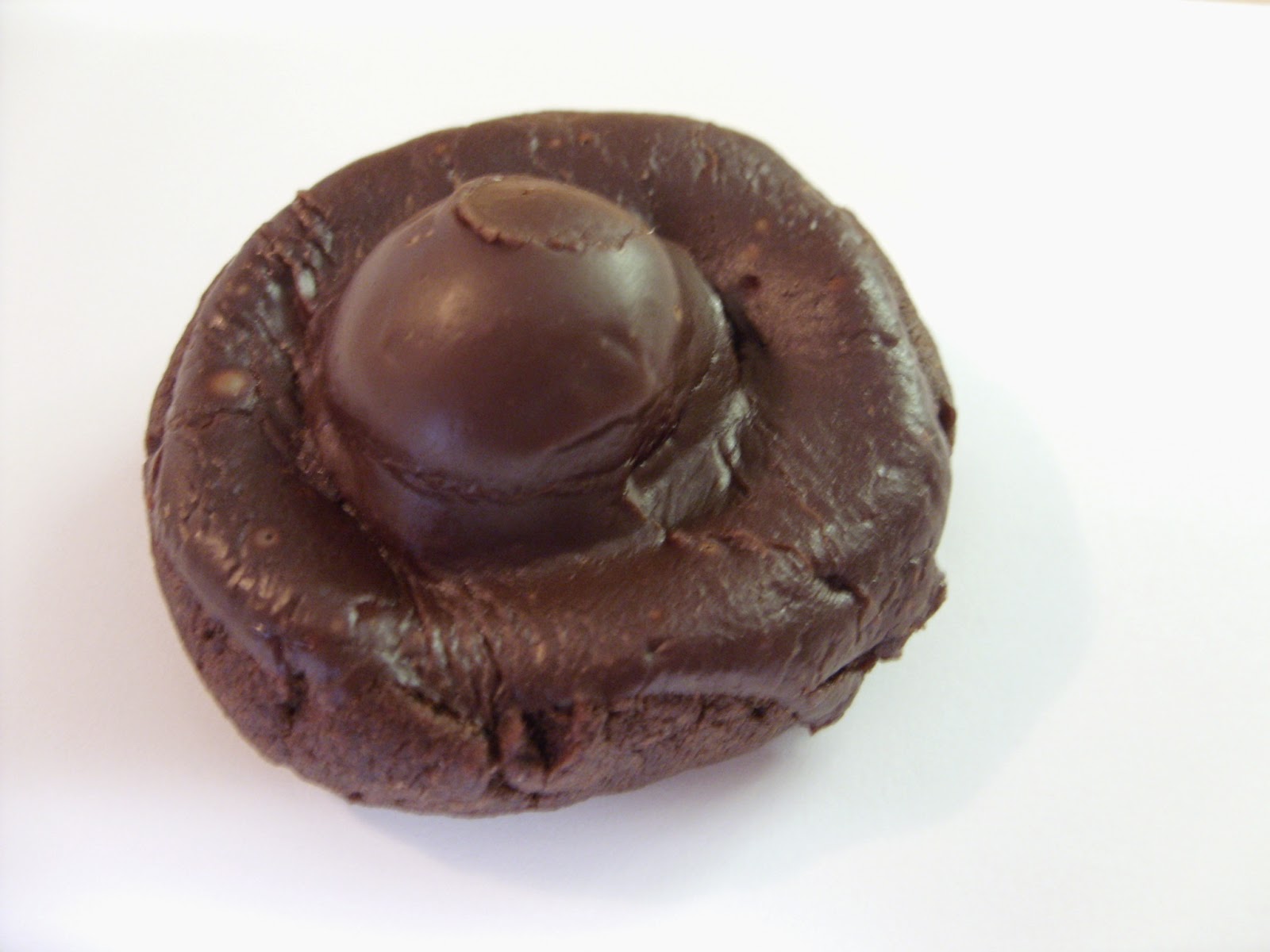 Think of it as a cross between a brownie and a thumbprint cookie with a cherry rather than jam. 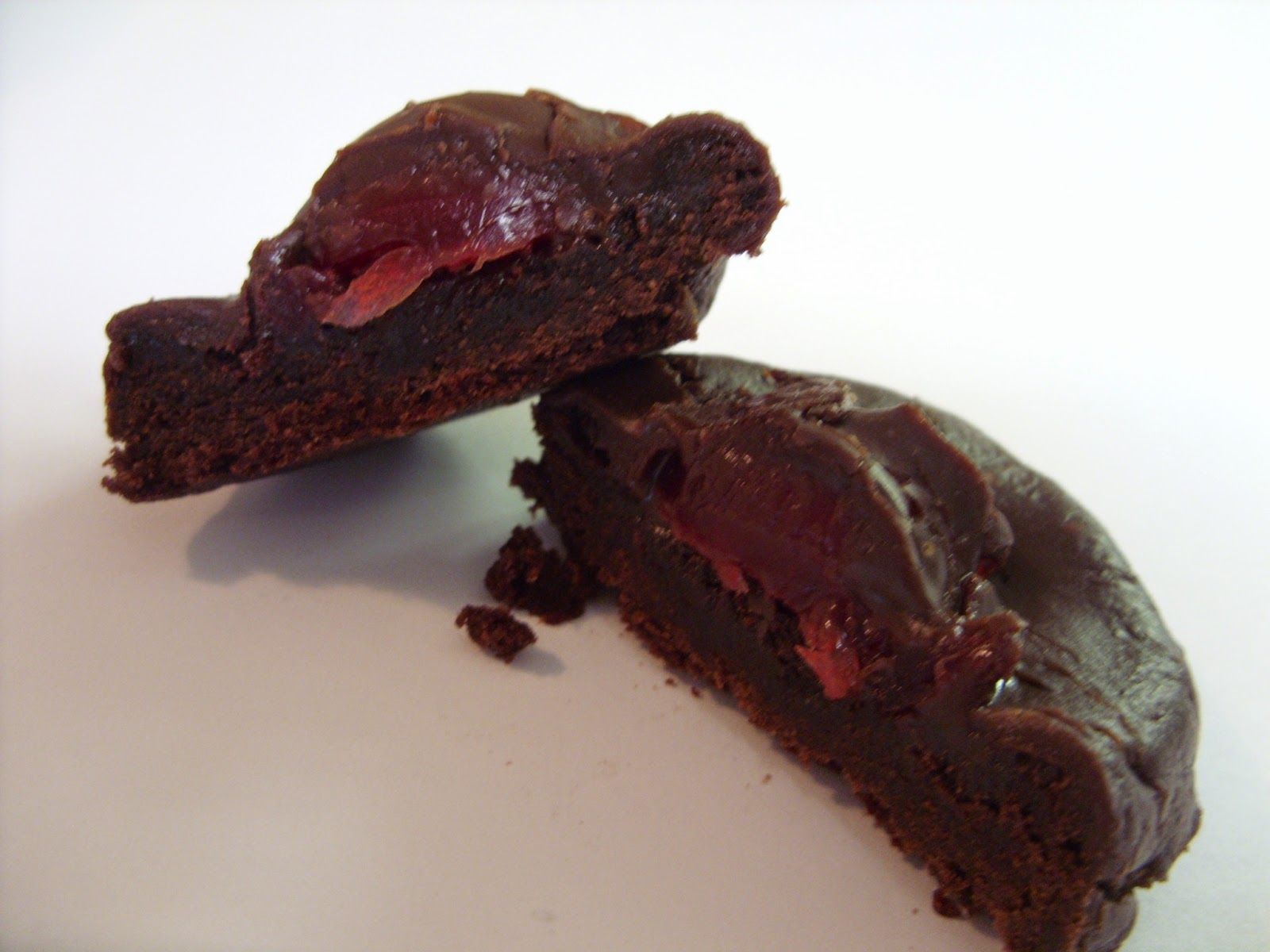 They were a bit fiddly, but when I'm so stressed out my shoulders are hunched up by my ears, there's something calming about baking. My hands find use, my shoulders (sort of) relax, and I (sort of) forget the throbbing in my face. Sure, tomorrow will probably be hellish too, but it is a very large cookbook. Chocolate biscotti sound good. I'll post the recipe at the bottom of the post. It sounds fiddly, and I suppose it is compared to a drop cookie, but they came together easily enough, and if I could manage them on a day like today, I'm sure you can handle them without much effort. 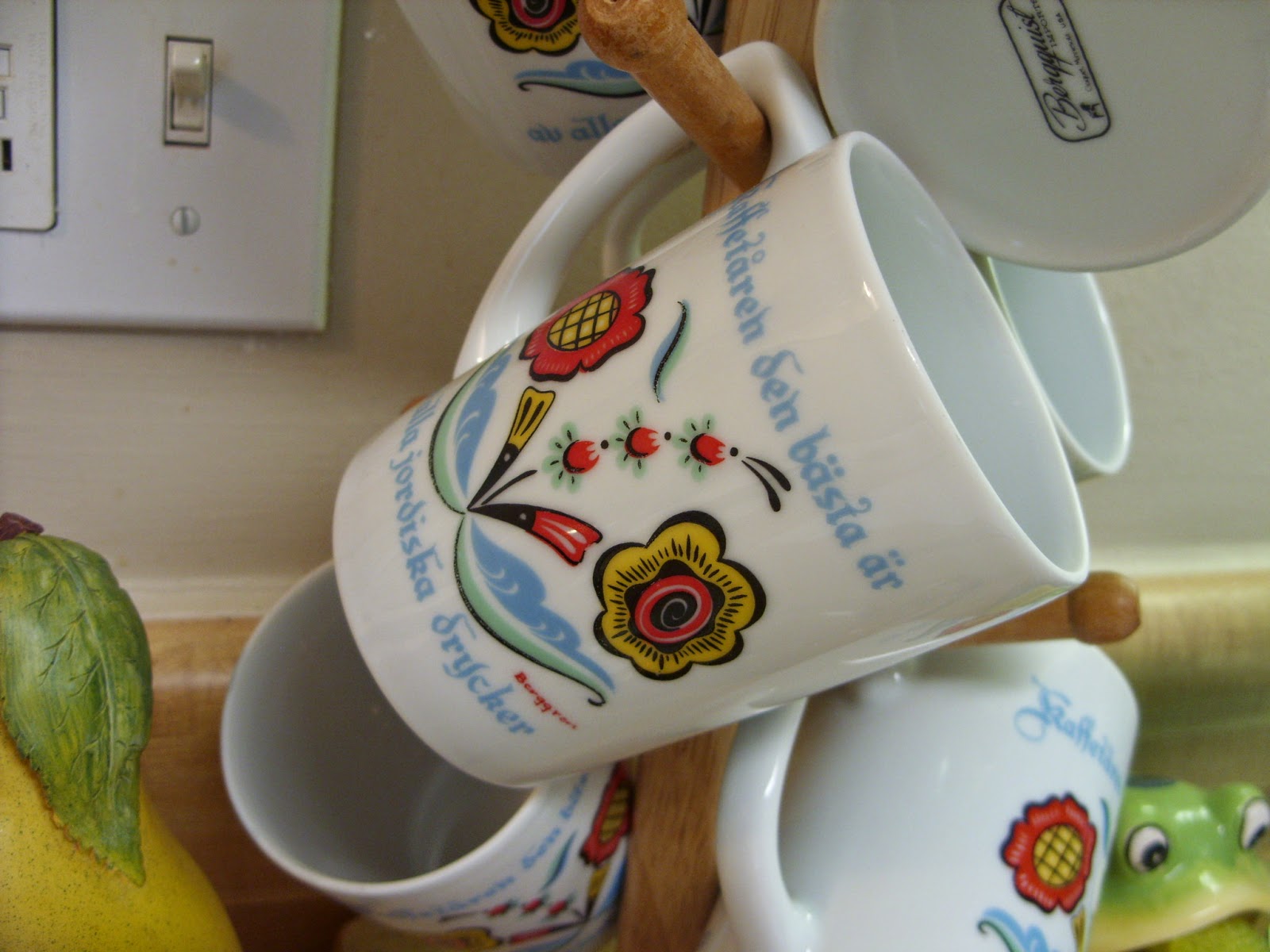 Being from Illinois, I have a love of the long-gone Berggren Trayner ceramics and enamelware. We had several pieces, but the kettle saw the most use, and would frequently get forgotten, boiled dry, and ruined. Dad would stop at the factory store in Libertyville, Ill. on his way back from the Wisconsin route, and replace it. I lost count how many times this happened, and I still don't know why they didn't simply buy a few extra. I suppose no one thinks they will do that again, but after the tenth time or so, reality should have kicked-in. The burnt out kettles became planters on the yellow tiered plantstand in the corner of the kitchen, which eventually had all matching kettles. A few years back, I was lucky enough to locate a set of canisters in a thrift store, and along with my percolator I've enjoyed having them brighten my kitchen counters. I never imagined I'd see these coffee mugs, much less the matching cake plates. I forked over my twenty bucks as fast as I could before anyone tried to purchase them out from under me. I needn't have worried, they'd been in the shop for months having been discounted several times from the original asking price of $70.00

I know coffee is only as good as you make it, but I swear it tastes better out of these mugs. Crazy, I know, but it does make the experience all the nicer. Mr. ETB rather likes the shape and design as well, which is nice as he rarely shares my taste in décor. Don't ask me to translate the Swedish (I may have spent the last 12 years living in a predominantly Swedish town, but that doesn't make me fluent). I know the kettle translates to, "A watched kettle never boils" because we used to joke that it didn't mean you should ignore it! Kaffetaren would have to mean coffee (wouldn't it?) but beyond that, I have no idea. Just looking at this cheerful little mug as I type, the day becomes less shitty. Maybe I should fill it with Absolut. That'd fix this shitty day. 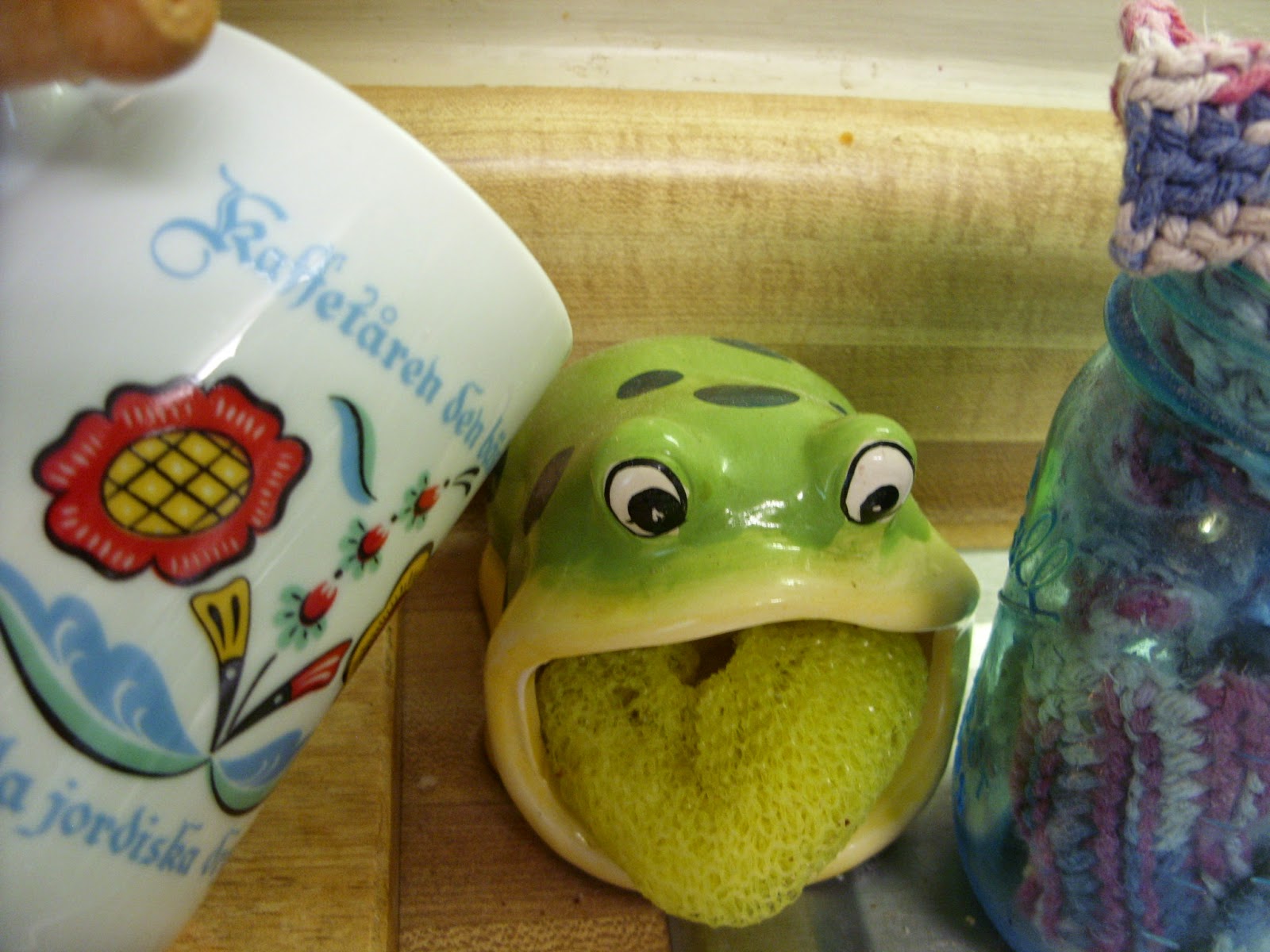 And when it is time to do the washing up? This fellow was $1.00 at the hardware store. I was a little surprised they are still making them, but then some things never go out of style, and you need a place to set your dish scrubber.

Here's to tomorrow (because I really can't take much more of today)!

Preheat oven to 350 degrees F. In a medium bowl, combine flour and cocoa. In a large bowl, beat softened butter 30 seconds, then combine sugar, baking powder, bicarb, and salt. Add slowly to sugar as you beat. Mix well. Add egg and vanilla and beat well. Slowly beat in the flour/cocoa mix until you can no longer incorporate it with the mixer, then finish by hand with a wooden spoon (mine all went in with the mixer).

Shape dough into 1 inch balls. Make a thumbprint, and press a cherry (or half) into the centre. Meanwhile, make the frosting by slowly melting together the chocolate and condensed milk, When all smooth, stir in 4 teaspoons of the reserved cherry juice and blend until smooth. You may need more juice if the mixture is too thick. Spread the frosting over the cherry (about 1 teaspoon per cherry) smoothing it out over the sides of the cherry. Bake 5 minutes, rotate pan and bake another 5 minutes or until edges are firm. Mine were a bit tricky to remove, so use a very thin, flexible spatula if you have one. Makes about 48.

Now, climb into bed with a tray of no less than ten of these, and a pretty Swedish coffee mug filled with grain spirits. Kiss your bad day goodbye.

I'm sorry to hear your account's been hacked, that must be ghastly. I hope the scrotes who did it get caught.

@Mim
Thanks. Hopefully that's all there is to it. At any rate, they wouldn't have gotten much money in my account :)

@Asparagus Pea
*slaps head* Oh yeah, it is 2014, I could have typed it into google. Thank you, I'm happy to have a translation. Welsh is no easy language to learn.

You had me (hook, line and sinker) at "cross between a brownie and a thumbprint cookie". Yes, pretty, pretty, please!!!! A GF version will be headed straight for my Christmas baking list - though I must, you know for "quality assurance purposes" have to try them out once (or ten times) before December. :D