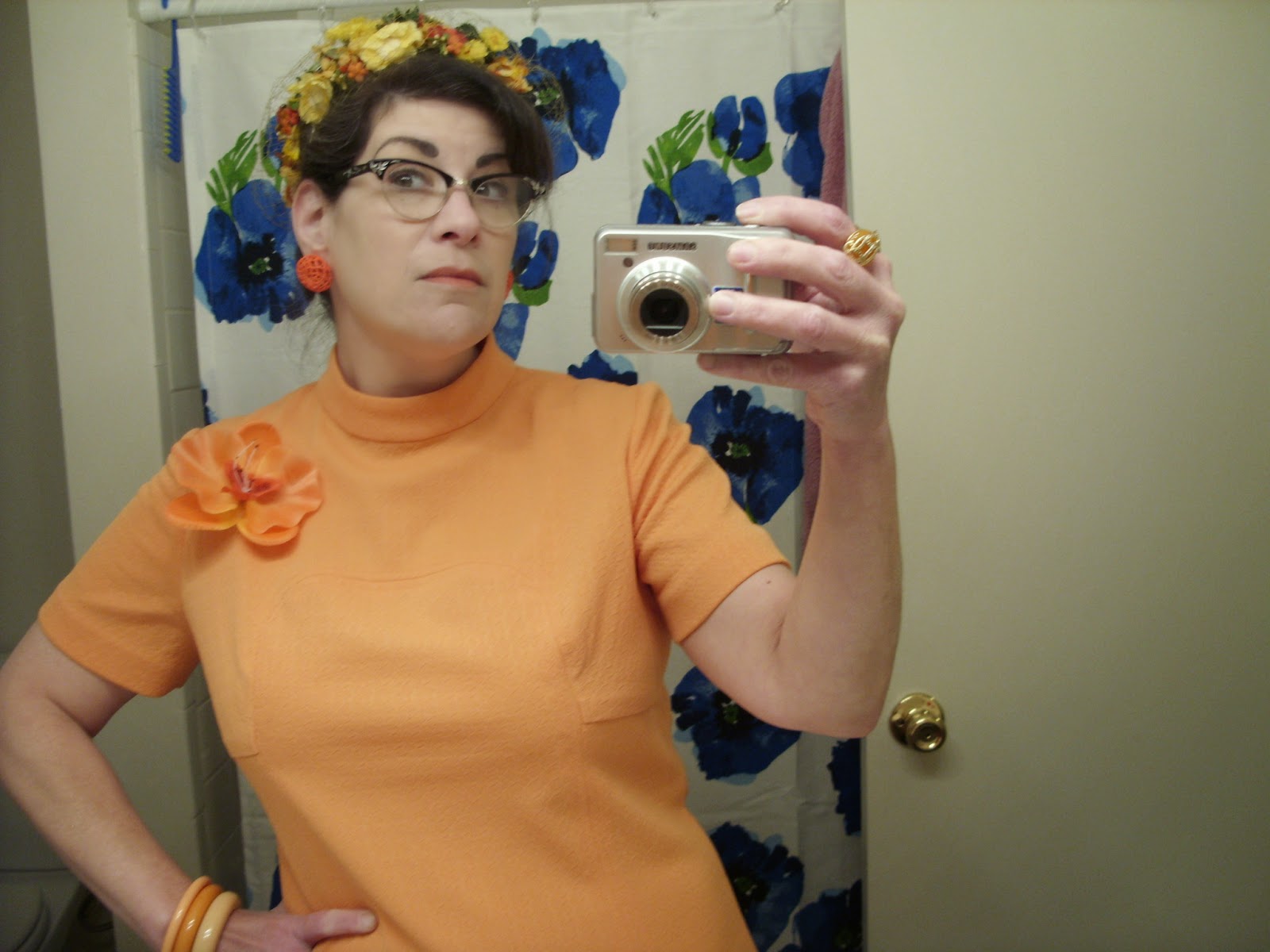 In the US (and maybe Canada?) we have a couple frozen confections that would also describe this dress but I was afraid putting, "Push-Up" or "Creamsicle" dress in the title would bring some strange search engine hits-and then they'd see this polyester creation and be disappointed because nothing kills a boner faster than a dress like this (unless you're a real sicko, in which case-knock yourself out, love). No, the pleasure in the wearing of this dress is all mine. 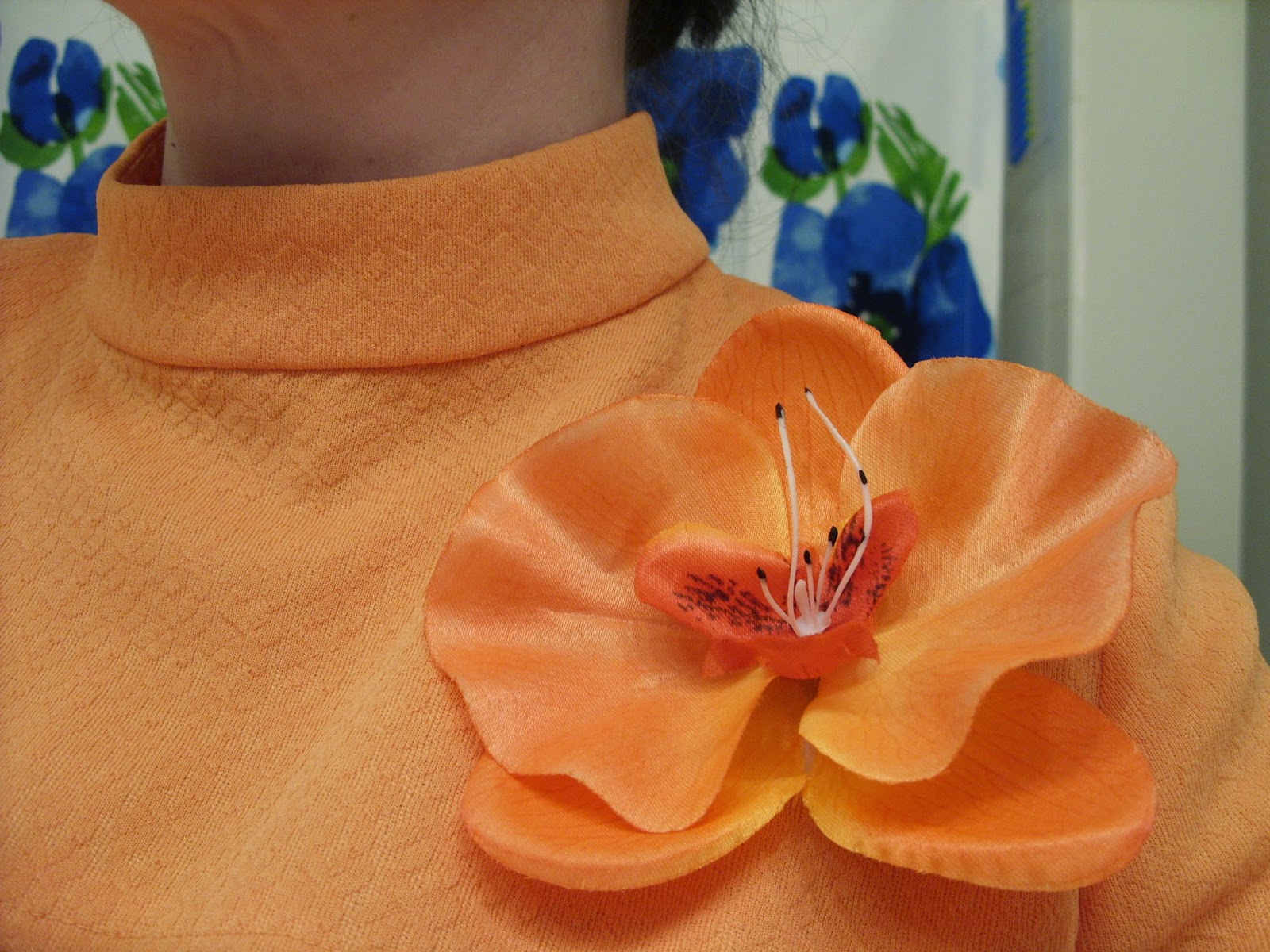 Apologies for the mirror photos. My photographer is having asthma again, and the medication makes his hands quite shaky. Poor kid, he finally gets over being sick most of summer, then the allergy induced asthma starts up again with the moulds. The first hard frost cannot get here quick enough as far as I'm concerned. I love summer, but listening to Danny hacking away like a guy whose been smoking a pack a day for fifty years is hard to take. 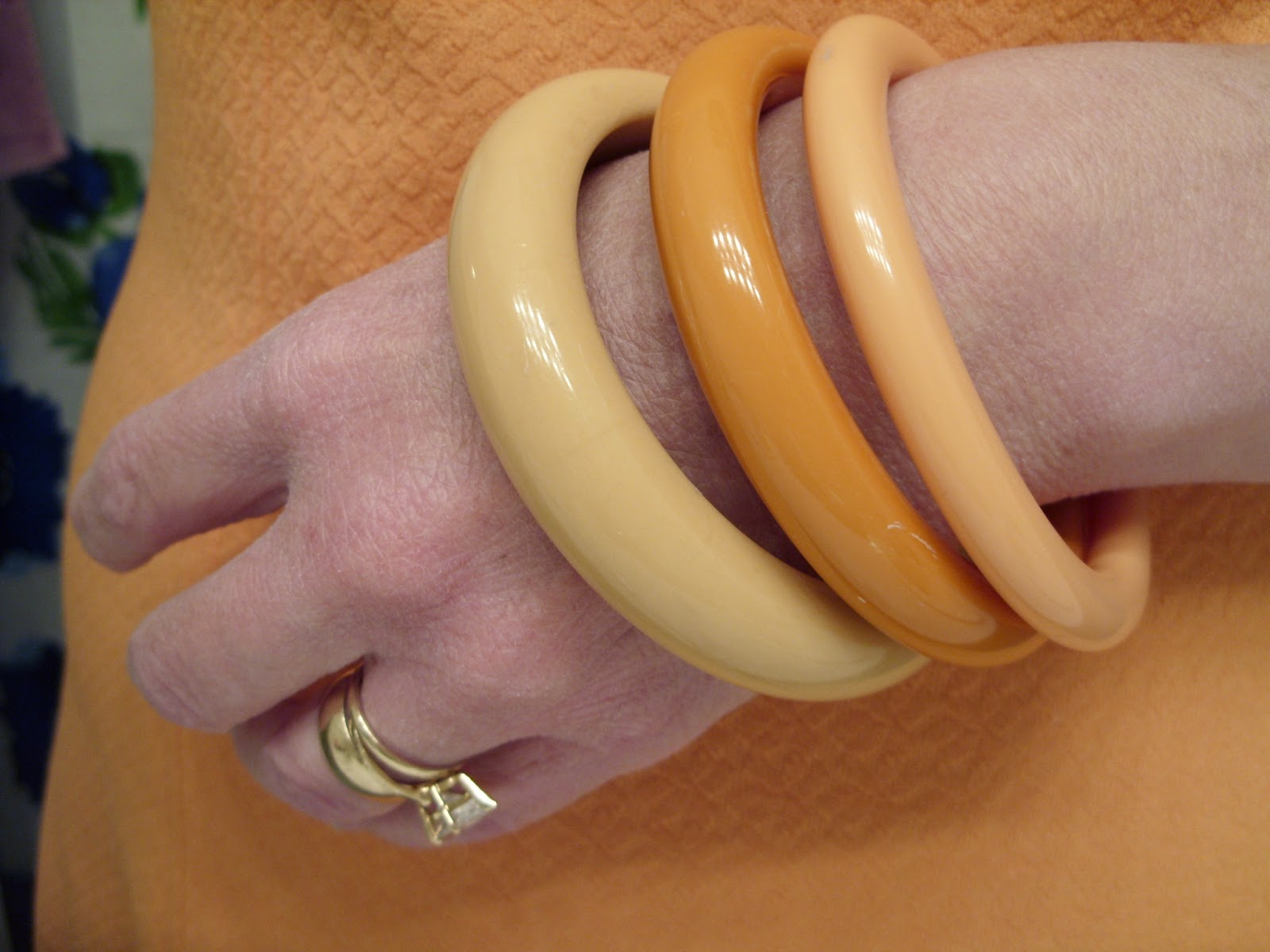 Tomorrow I finish up with the dentist (for now) and then pretty much do nothing for the rest of the week because the one car is in the shop, and the heat is going to be insane. Mr. ETB thinks I'm going to let him take the bus on a 98 degree day (I'm not) and I'm sure as hell not going out. The pool would just be like bathwater anyway. 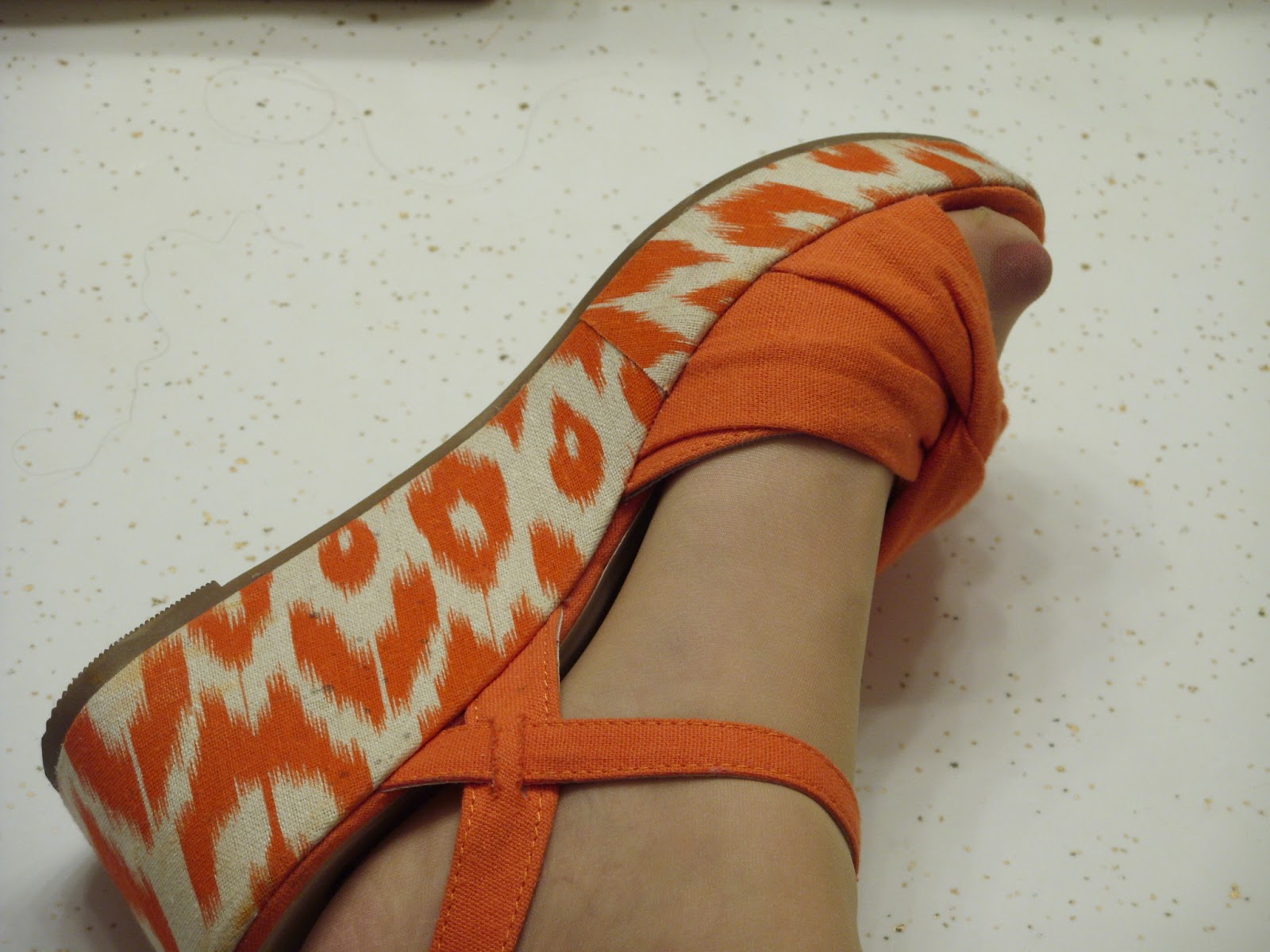 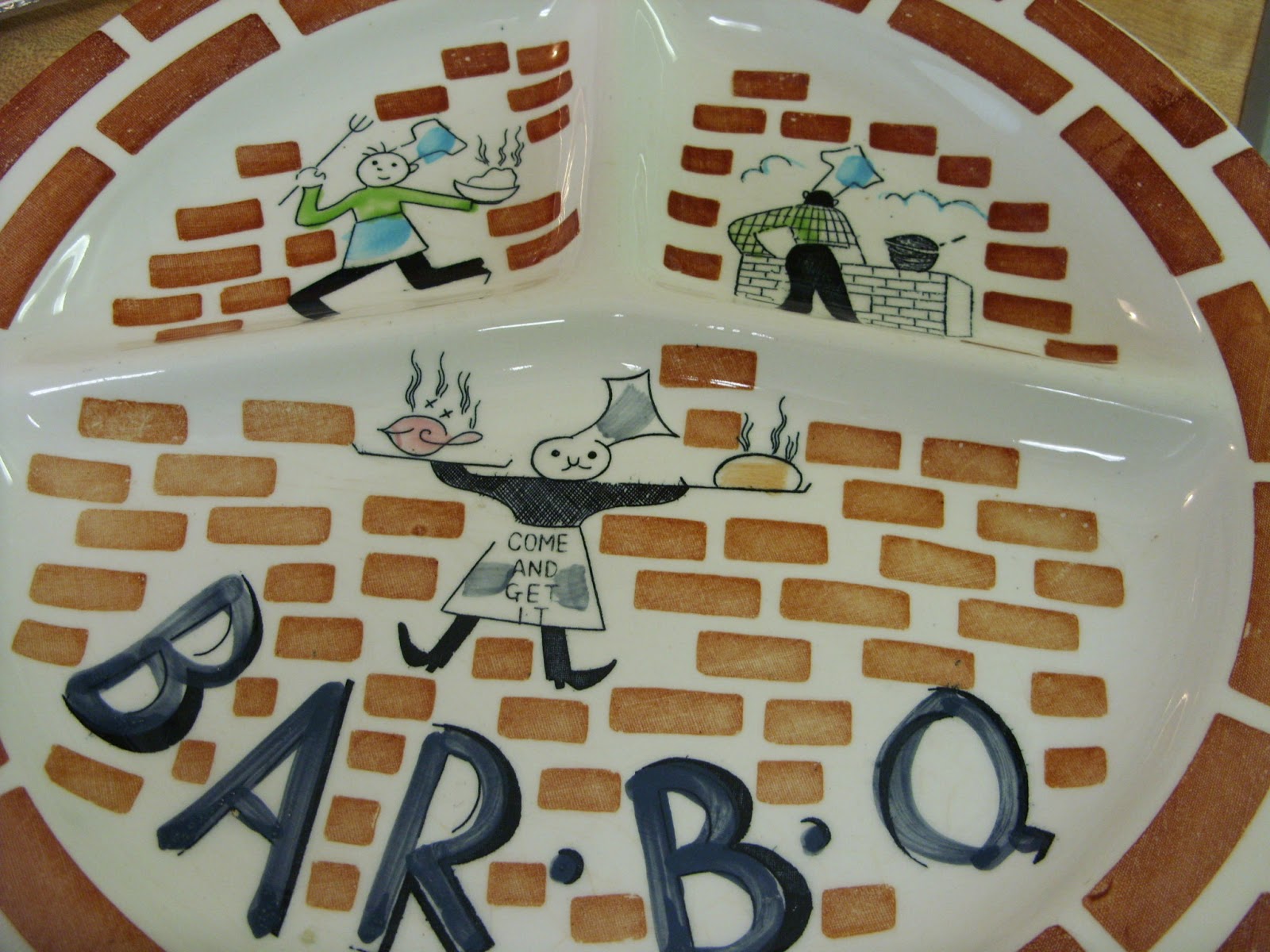 Indeed. Tastes better when you have a special plate too. 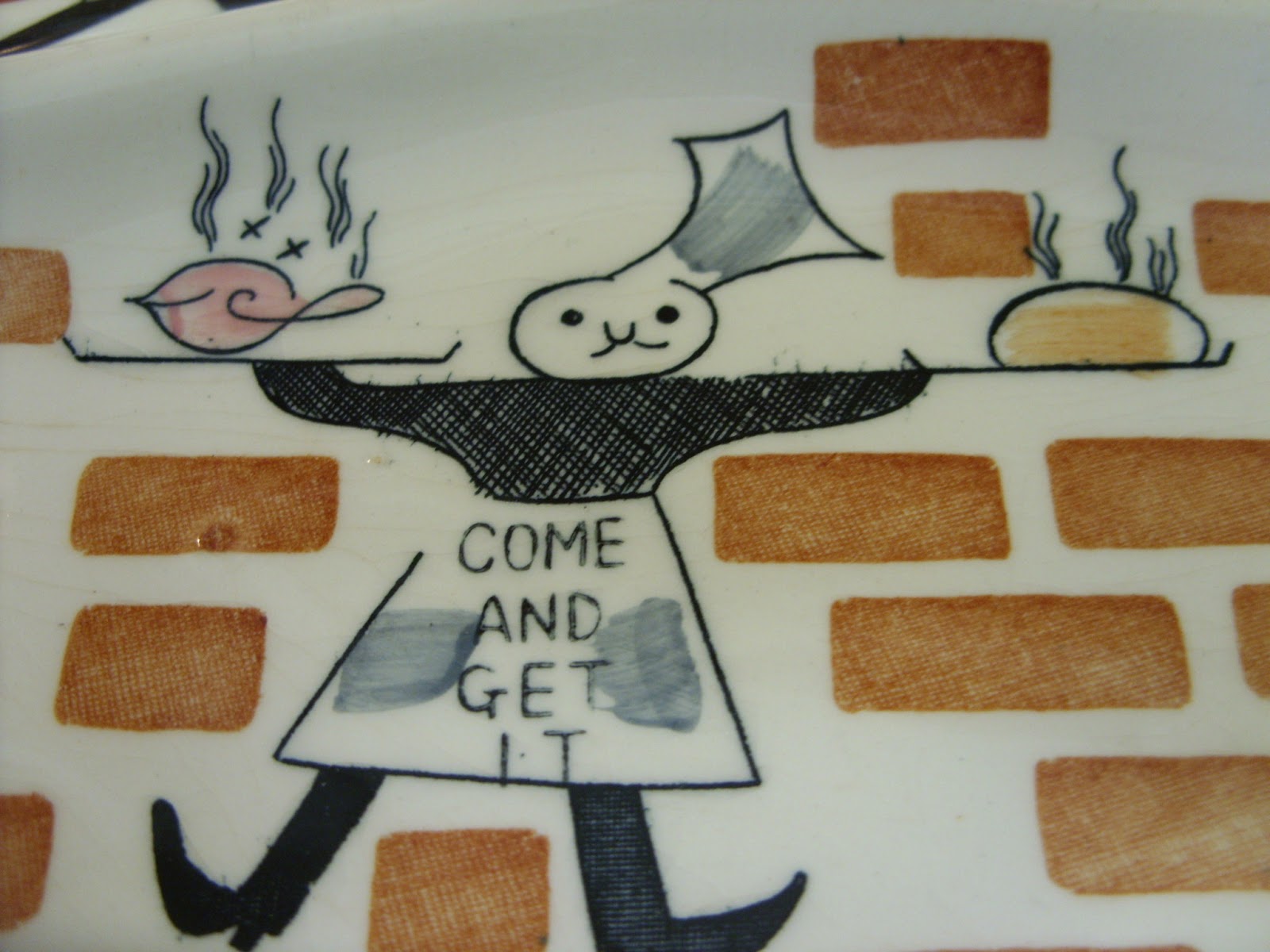 OK, it was BBQ tofu, but it made killer sandwiches. They're eating the leftovers tonight because I'm a "cook once, serve it for days" kind of homemaker. Thankfully, they don't object to re-runs.

Outfit Particulars:
1960's orange polyester home-sewn (not by me) dress-Goodwill, .99 cents
Shoes-K Mart
Flower pin/hair clip-Tiff and Tam
Earrings-Hand-Me-Ups
Hat-Goodwill
Bangles-thrifted
Fragrance-Innisfree
Lippy-Revlon Jungle Peach (who the hell names these?) a vintage re-issue that probably should have stayed in the 60's with robin's egg blue mascara) 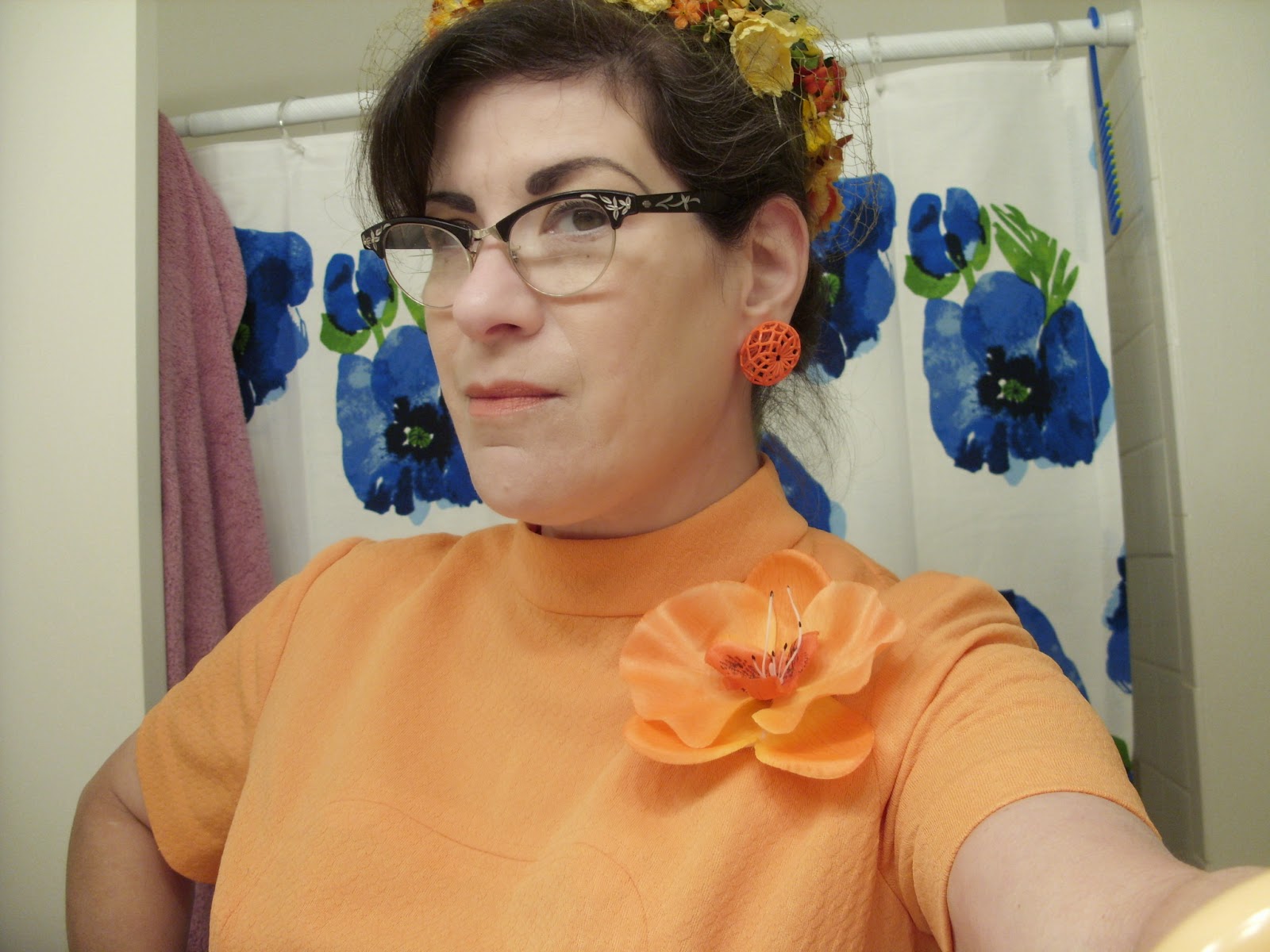 Let's see if we can get a better look at that... 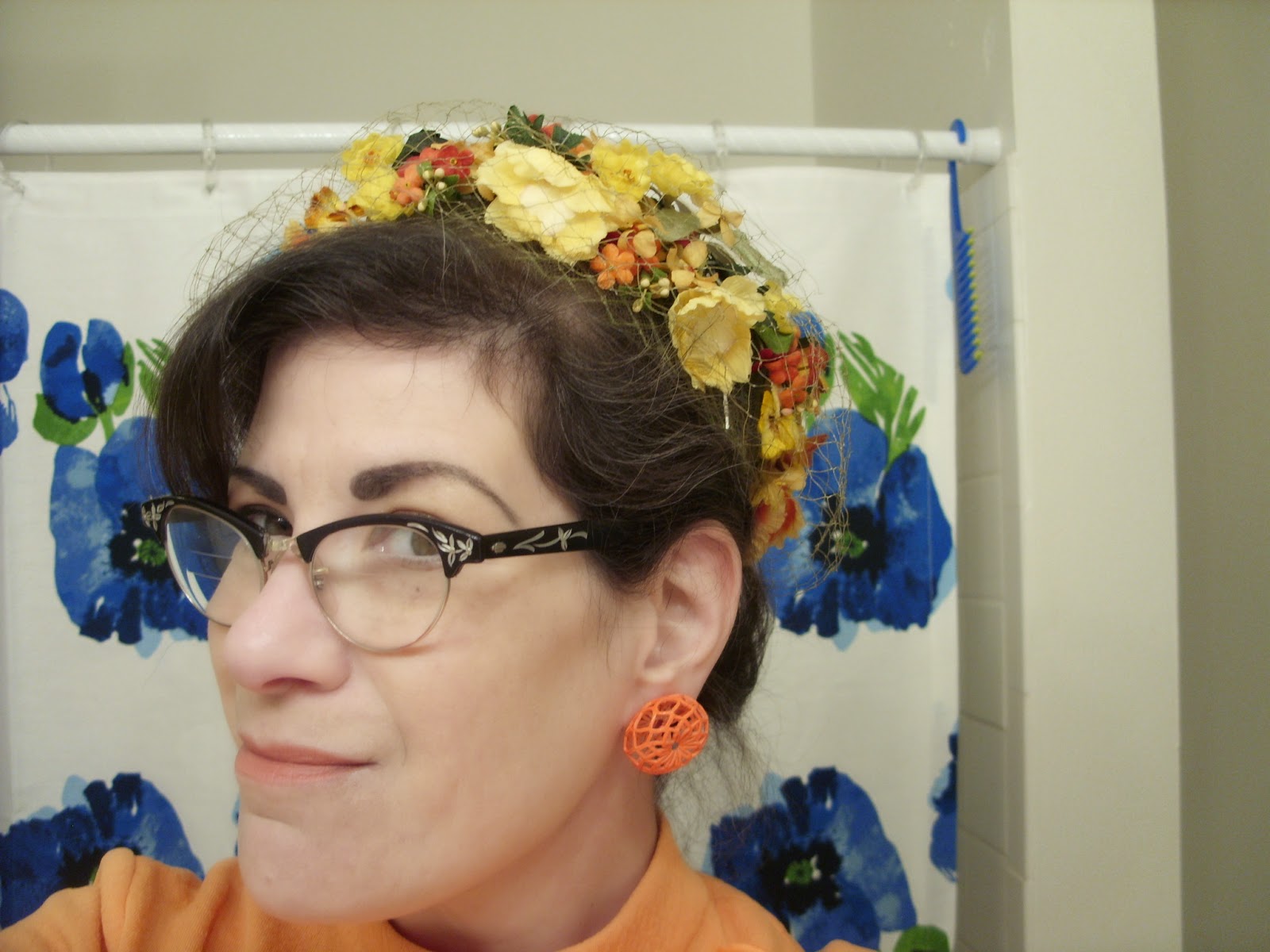 Huh. It looks better in the photos than it does in person. You'll have to take my word for it, this is the strangest, dullest, matte orange lippy I've ever encountered. That's how they sell this stuff-good lighting.

Light orange dress? That's s sure-bet! (Sorry, I had to).

Now I love a 1960s shift dress, and I like a bit of Crimplene, and goodness knows I adore orange... But I would have to do something about the neckline, I cannot wear anything with a high neck like that! That said, I think you look quite the lady (which might be the effect of the fabulous hat) and I am feeling pangs of jealousy over your sandals. Why haven't I got any orange shoes?
Poor Danny, hope his asthma improves as the weather cools, if not before. xxxx

Chuckle, chuckle, chuckle :D Yes, those are words (right up their with "cream pie") that should be avoided in none-recipe blog post titles for sure.

We have Creamiscles up in the wilds of Canada, too. In fact, they're one of my favourite frozen treats ever. That sweet, citrusy smell - gosh, just thinking about it makes me want to go buy a box! :D

I think I was born wearing a polo neck! It has been a real challenge for me getting away from hiding my neck (has nothing to do with age, as I dressed that way when young).

Thanks for the kind thoughts for kiddo. He's less bothered by it than his parents, but I guess that's as it should be.

Creamsicle is a great color for you! Those bracelets are very lovely! So sorry to hear about your son, I hope he feels better soon:(

And then those perverts had to go and ruin a lovely strand of pearls...

I laughed so much at your kill a boner comment that I had tears running down my checks, TOF just looked at me as if to say WTF?? Those shoes are pretty fine, I would so strap them on. But your hat is superb, and you wear the vintage hats so well. I have a huge noggin (head) and it ain't full of brains! So the older hats just don't go on.

I actually like that dress, though can't comment on any possible boner-killing powers. I'd slap on a big gold brooch and wear it to work! The lipstick is fab too.

Now you've got me thinking - is creamsickle a rude thing? Do I want to google it? *Should* I even consider googling it?

Orange?!? Creamsicle?
I'd say more like Tangerine...........
She is all they claim.....
With her eyes of night and lips as bright as flame!
Tangerine, when she dances by, senoritas stare and caballeros sigh!
And I've seen toasts to Tangerine
Raised in every bar across the Argentine.......
Yes, she has them all on the run, but her heart belongs to just one
Her heart belongs to Tangerine
Oh Tangerine, she is all they say
With mascara'd eye and shadow by Dache.
Tangerine, with her lips of flame
If the color keeps, Louis Philippe's to blame.
And I've seen clothes on Tangerine
Where the label says "From Macy's Mezzanine".
Yes, she's got the guys in a whirl, but she's only fooling one girl......
She's only fooling Tangerine!!!!!!
Well, I like that one better than the Led Zeppelin faux folksy 'Tangerine' mess anyway.
Interesting how Hermes has picked 'Tangerine' as one of their signature colors along with feu, capucine, rose Jaipur, pain d' epice, rose Scheherazade, etc & so my dear you'd fit right in with the chic & styling' jet setting elite Maison L'ecrin ladies wielding their $50k Picotins or piddily $10K Birkins flitting about about Hong Kong or Macau. (And you you got it all for a pittance of what they paid- NYAH!)

I cannot thank you enough for not writing "sherBERT."

@Mim
The less you google, the less discomforted by the world you will be (oh to be able to un-read things...)

@Bibi
They wouldn't let me within 100 yards of the elite ;)Sometimes, I think people are afraid of parking next to my car for fear it might be contagious.

@Propagatrix
Or Cue-pons, or my dad's best one, "Cougar-rands" which at least would have been a badass sounding currency.