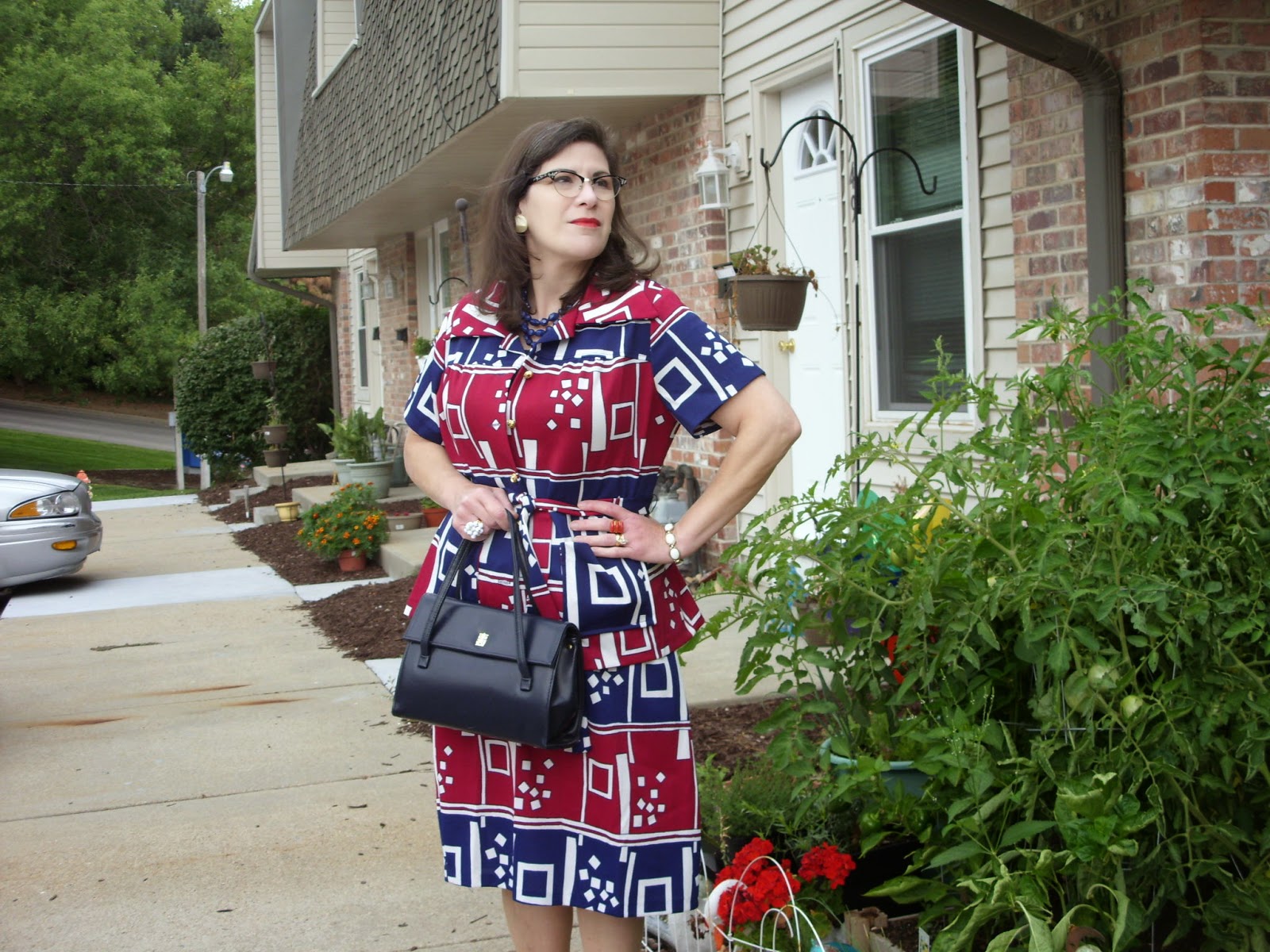 New neighbours were moving in across the way as I played supermodel in the front garden. They're probably frantically reconsidering their lease as I type! Of course, they're young (can't be much more than 25) and they always look terrified at that age. I'll have to drop by with some tomatoes and a jar of jam to frighten them in person. 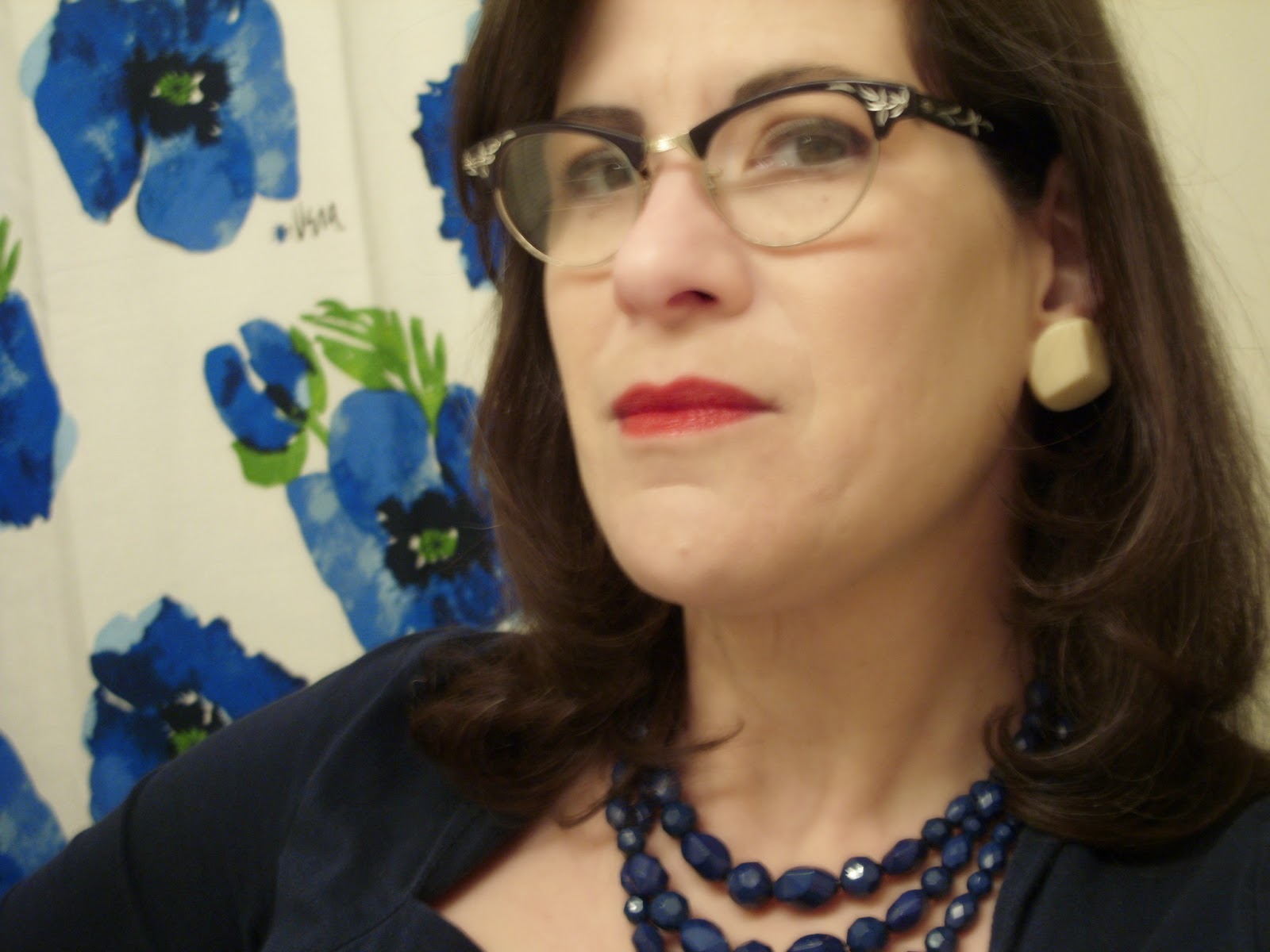 Here's my best "frighten the young people off my lawn" face. Damn whippersnappers. I think I frightened the clerk at the art supply store too, but perhaps she was intimidated by my stack of hard-bound sketchbooks for plotting my world domination. Or nature sketches. *Shrug*. 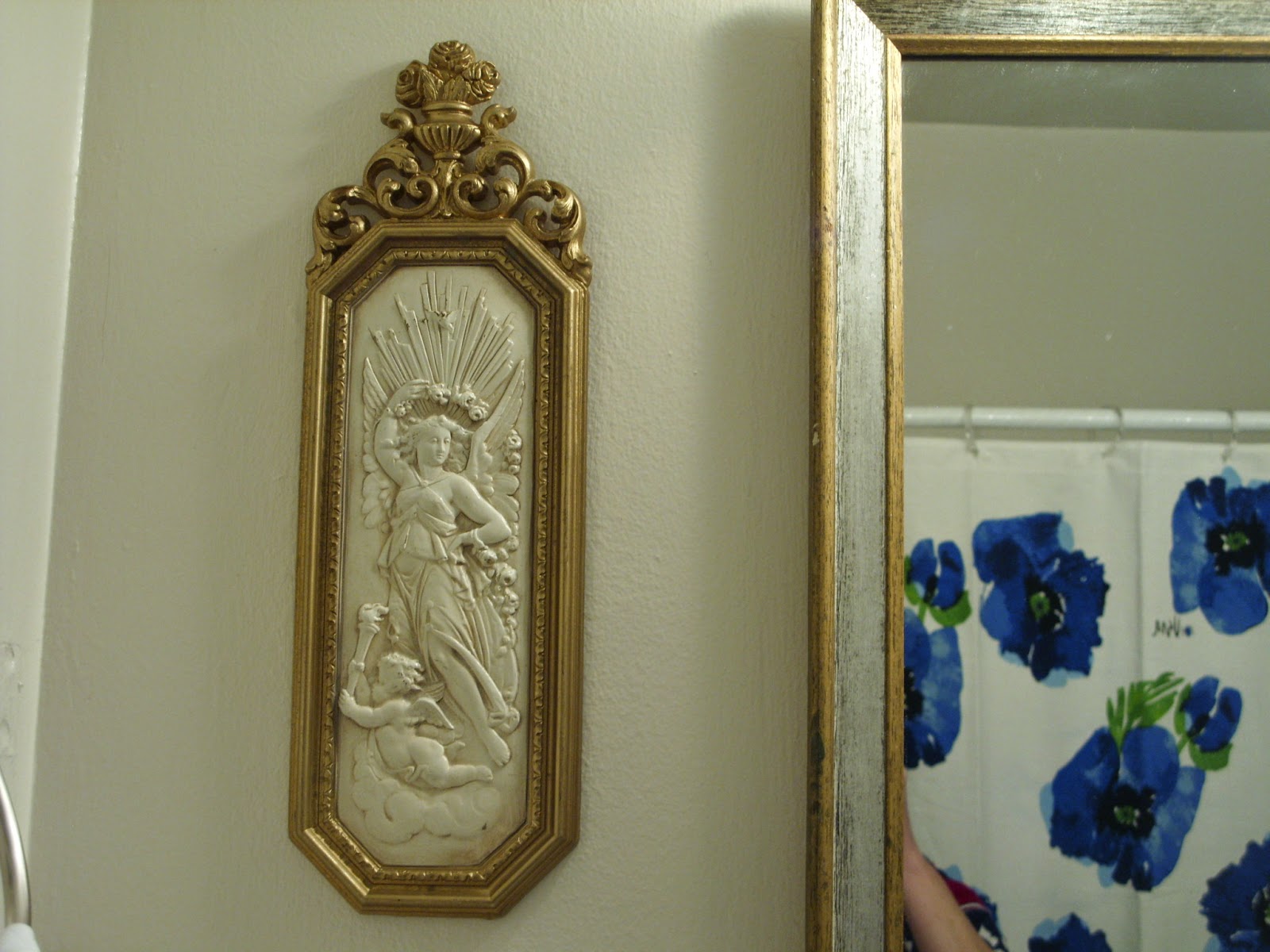 Speaking of art...this isn't. But it matches the mirror, and the moulded plastic roses on the opposite side. 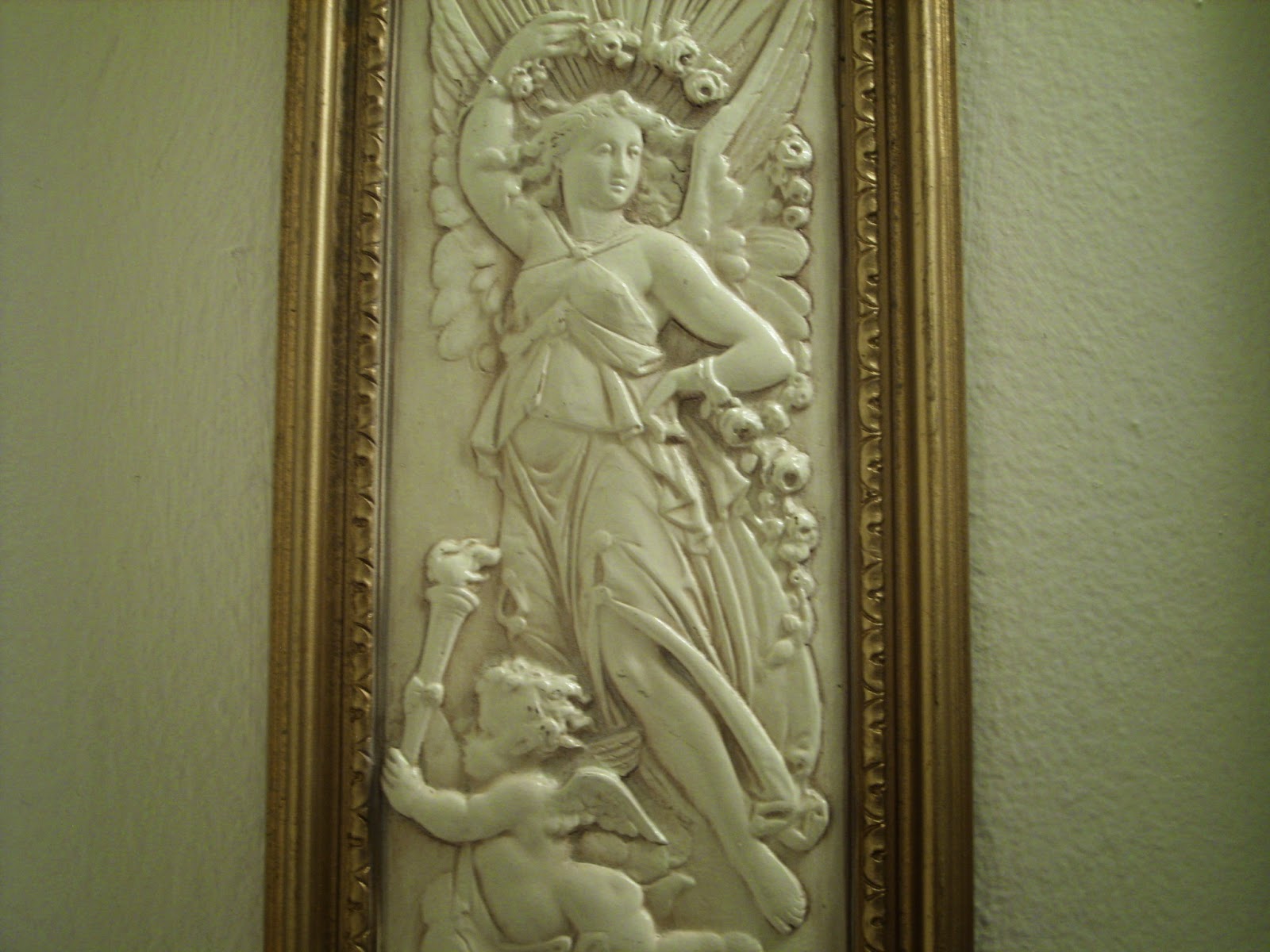 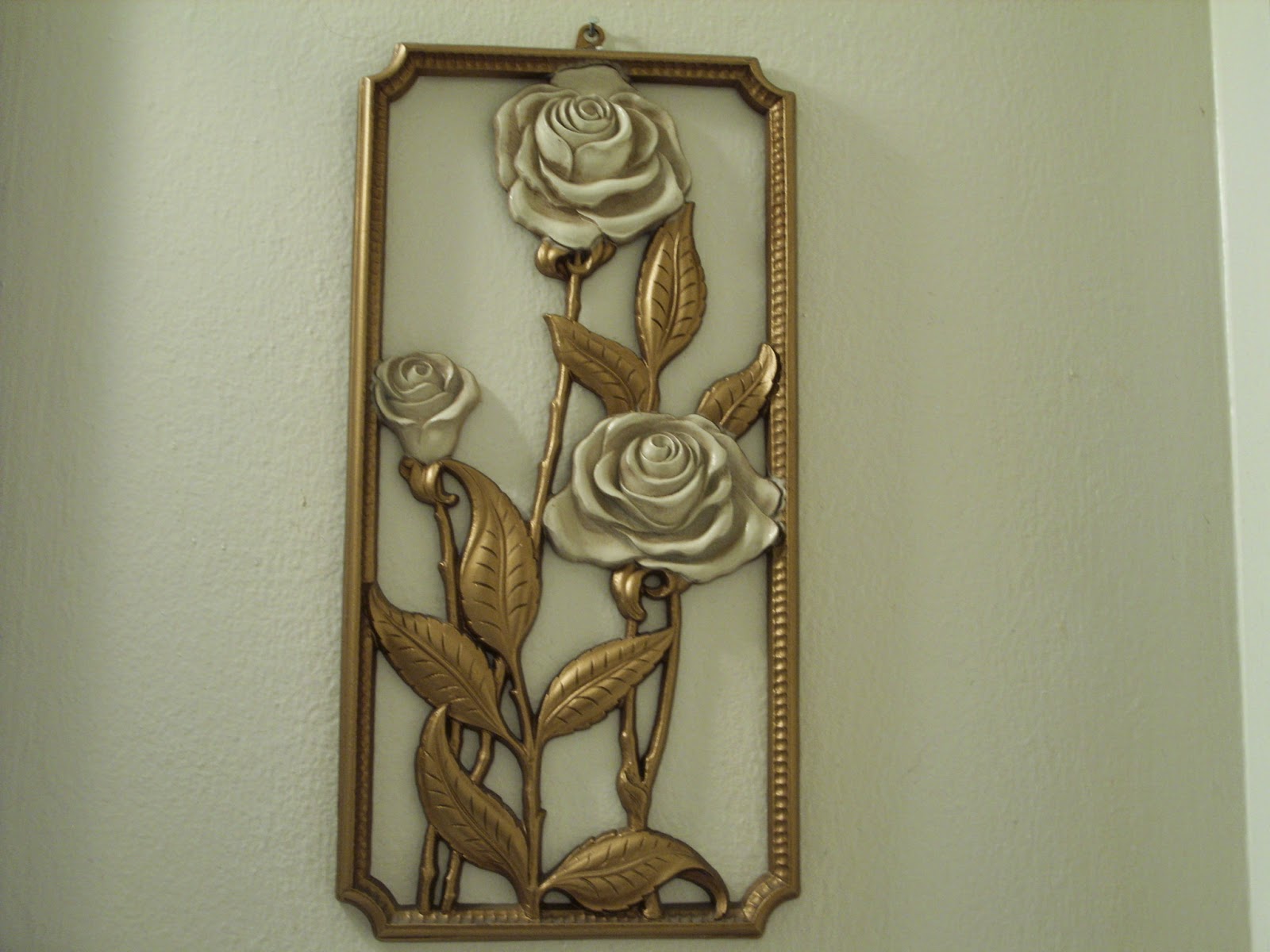 Looking at the back I noticed they were both made by the same company (Dart Industries) in the same year (1970). Still not art. 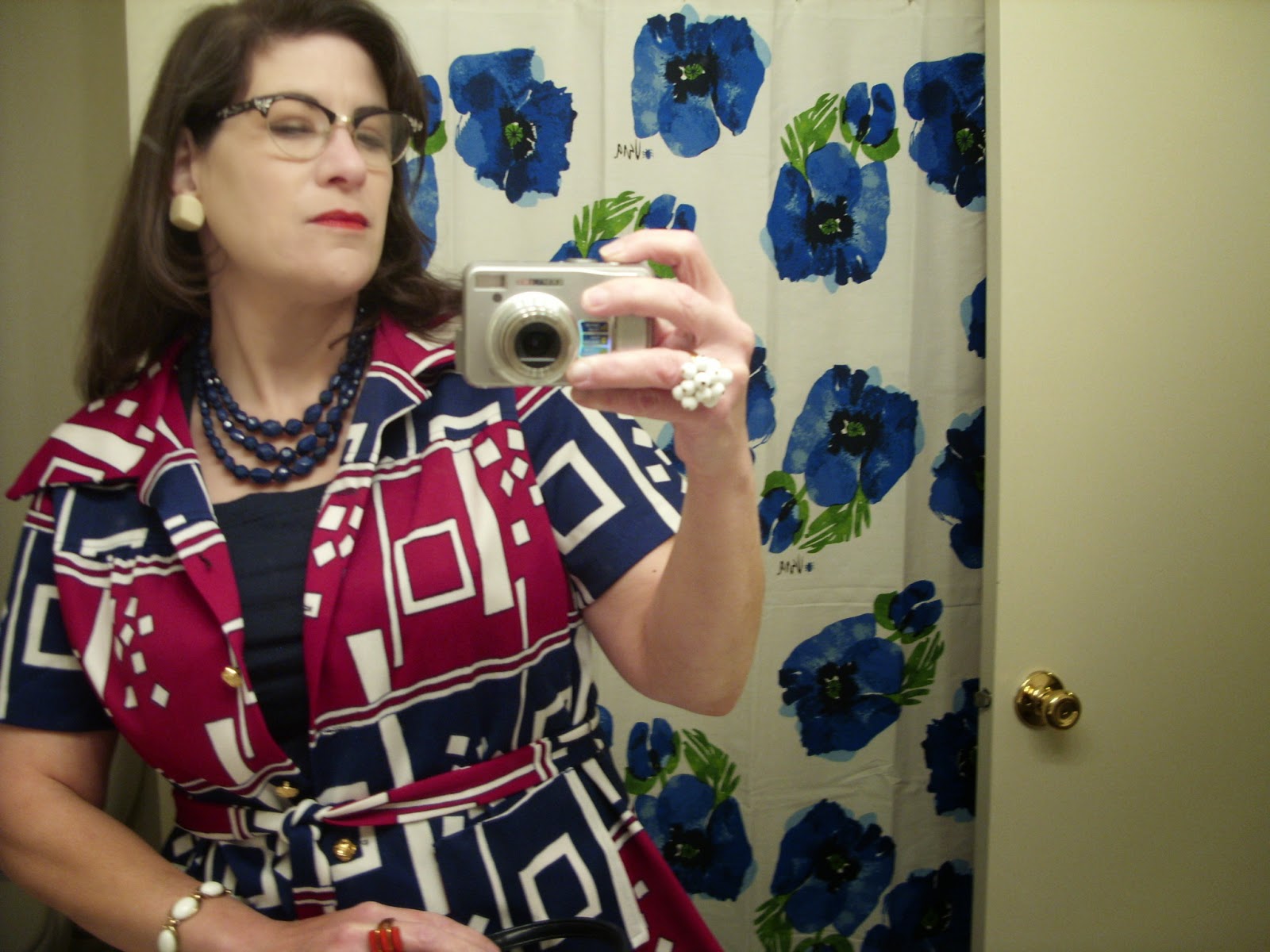 This jacket and skirt is about four sizes too big. I pinned the skirt today to wear it out and see if I felt it was worth the effort of fixing. I don't really think it is. The jacket would need more attention that it is worth, so I'm going to put it in the "sale" pile and hopefully someone else will wear and enjoy it. Good vintage in larger sizes is difficult to come by, and this is a killer print with the best kind of lapels... 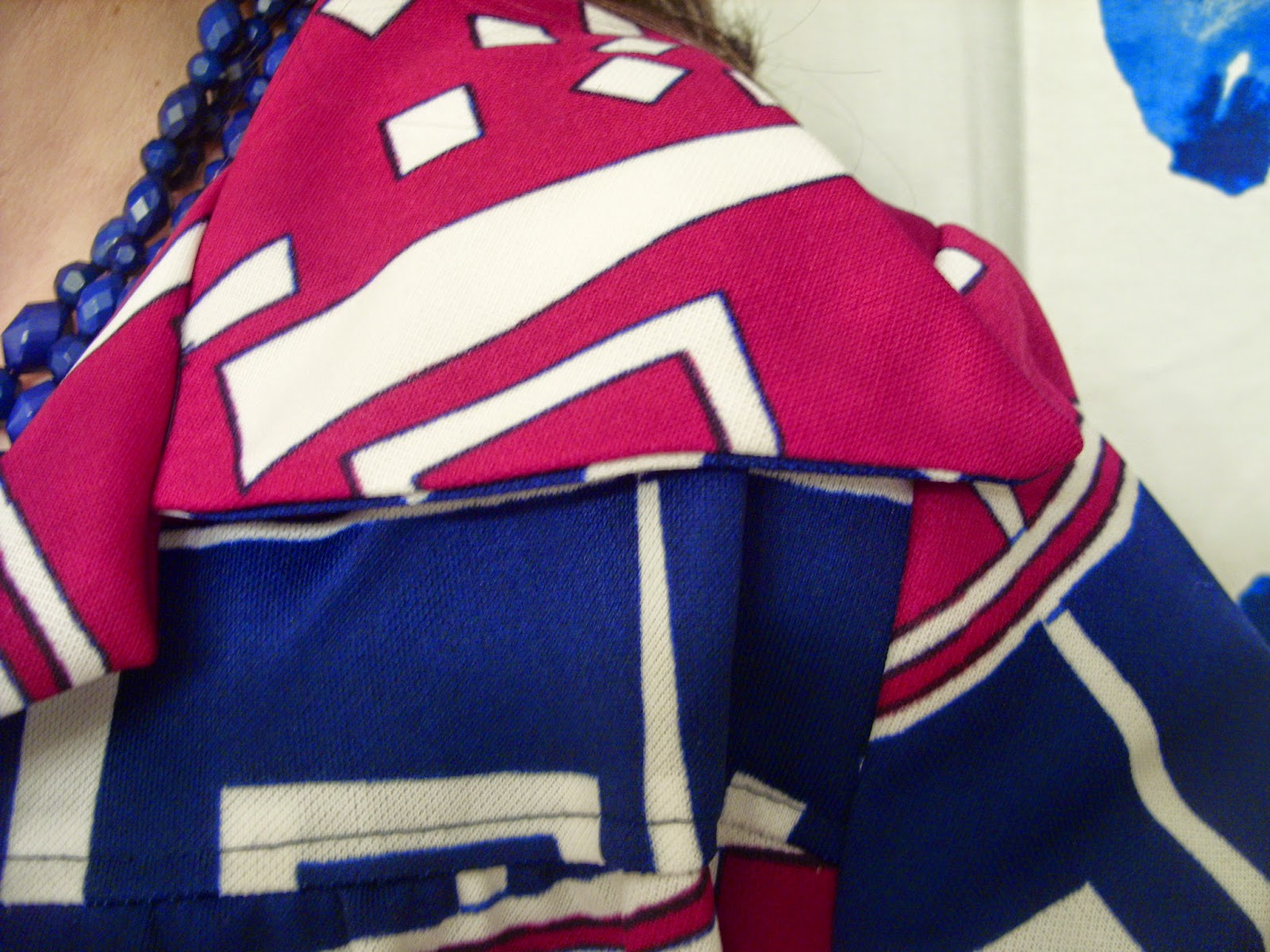 Huge ones. The lapels (you perverts). 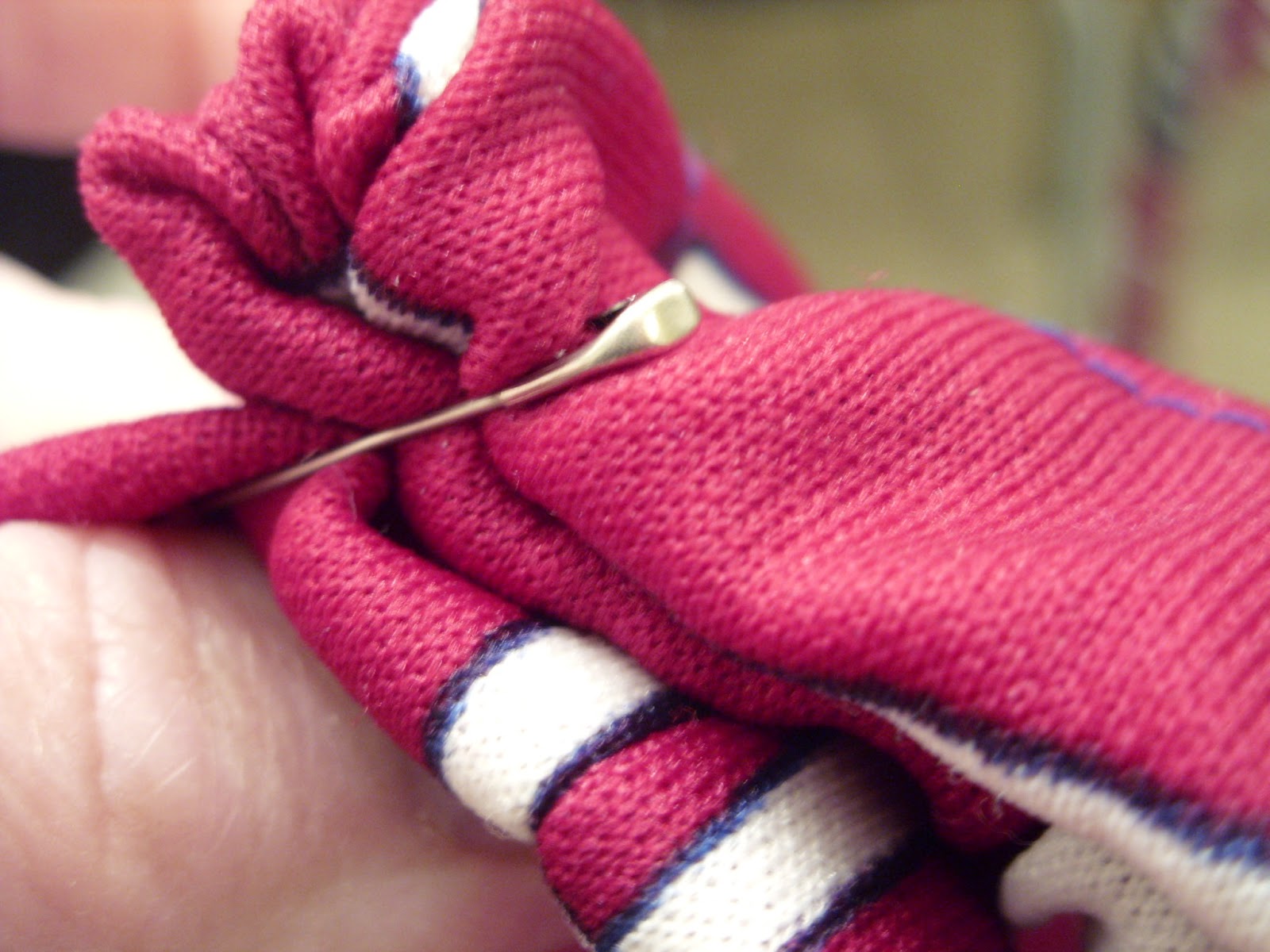 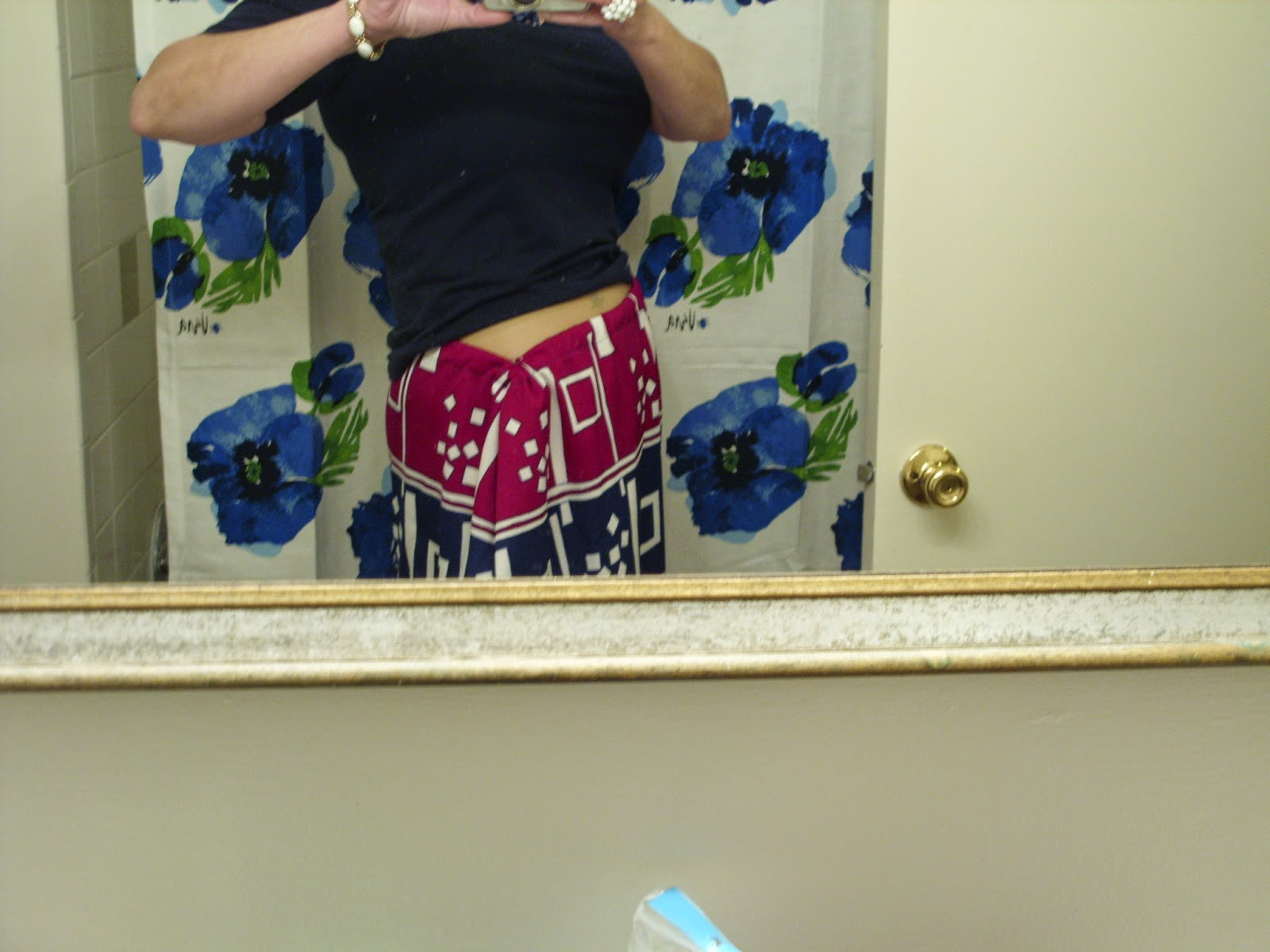 I warned you. At least I wore nan-tights, so don't go getting too hot and bothered.

Sure, I could have pinned it so the pattern matched. Well no, really I couldn't because who on earth would do that? At that point, you might as well sew. 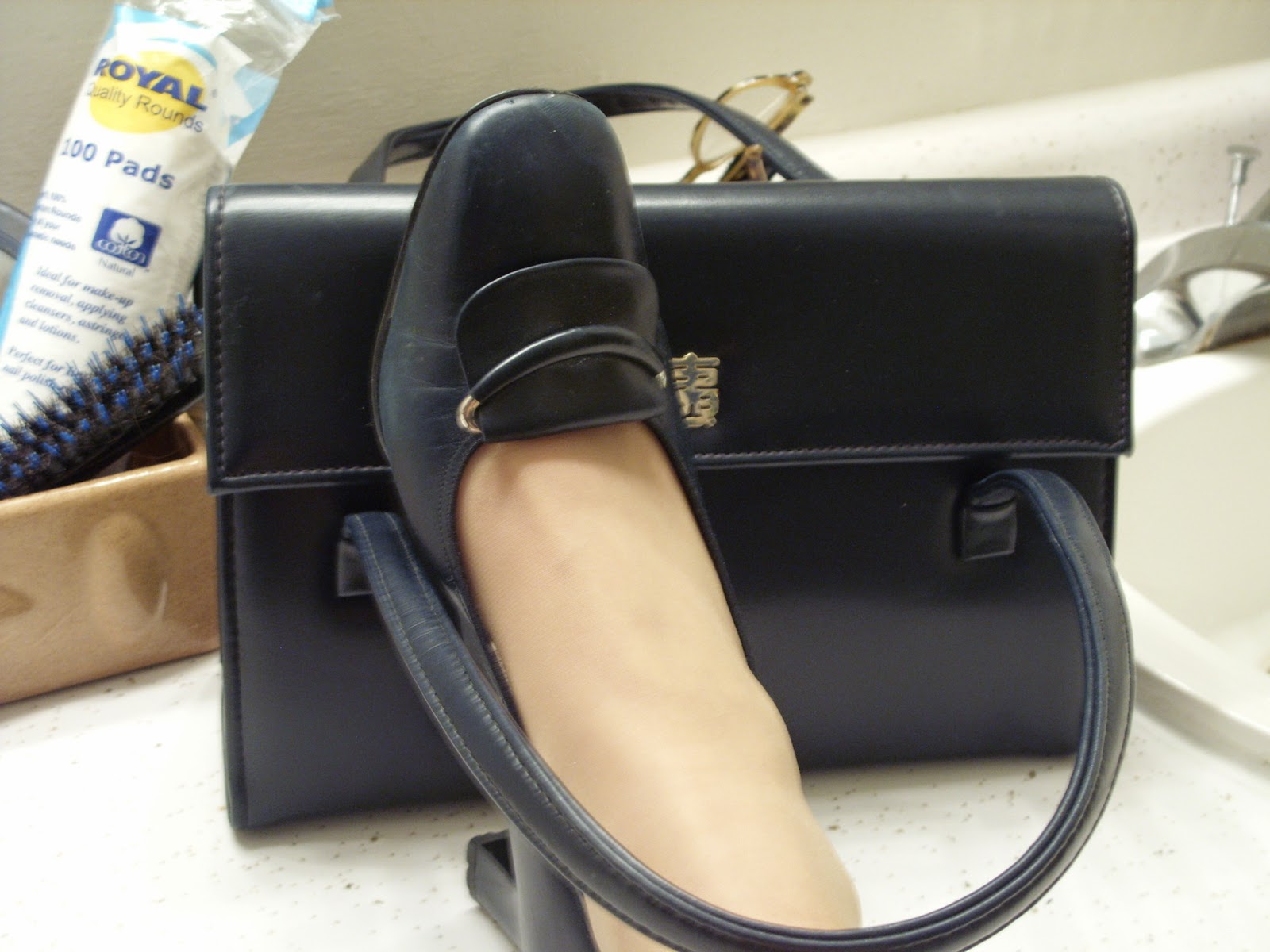 Now that you've had a peek at my gut, have a glance at those sexy, swollen, nylon-clad ankles. Support hose, as we call 'em here. There's so much elastic in those tights I can barely bend my knees, but that's OK because I have a child to do all the bending/picking things up/ etc. Just wait until he's a teenager and I make him carry me up and down the stairs. He's nearly big enough now. That's why I had a child-to pick up stuff I dropped so I don't need to bend, and carry me around. 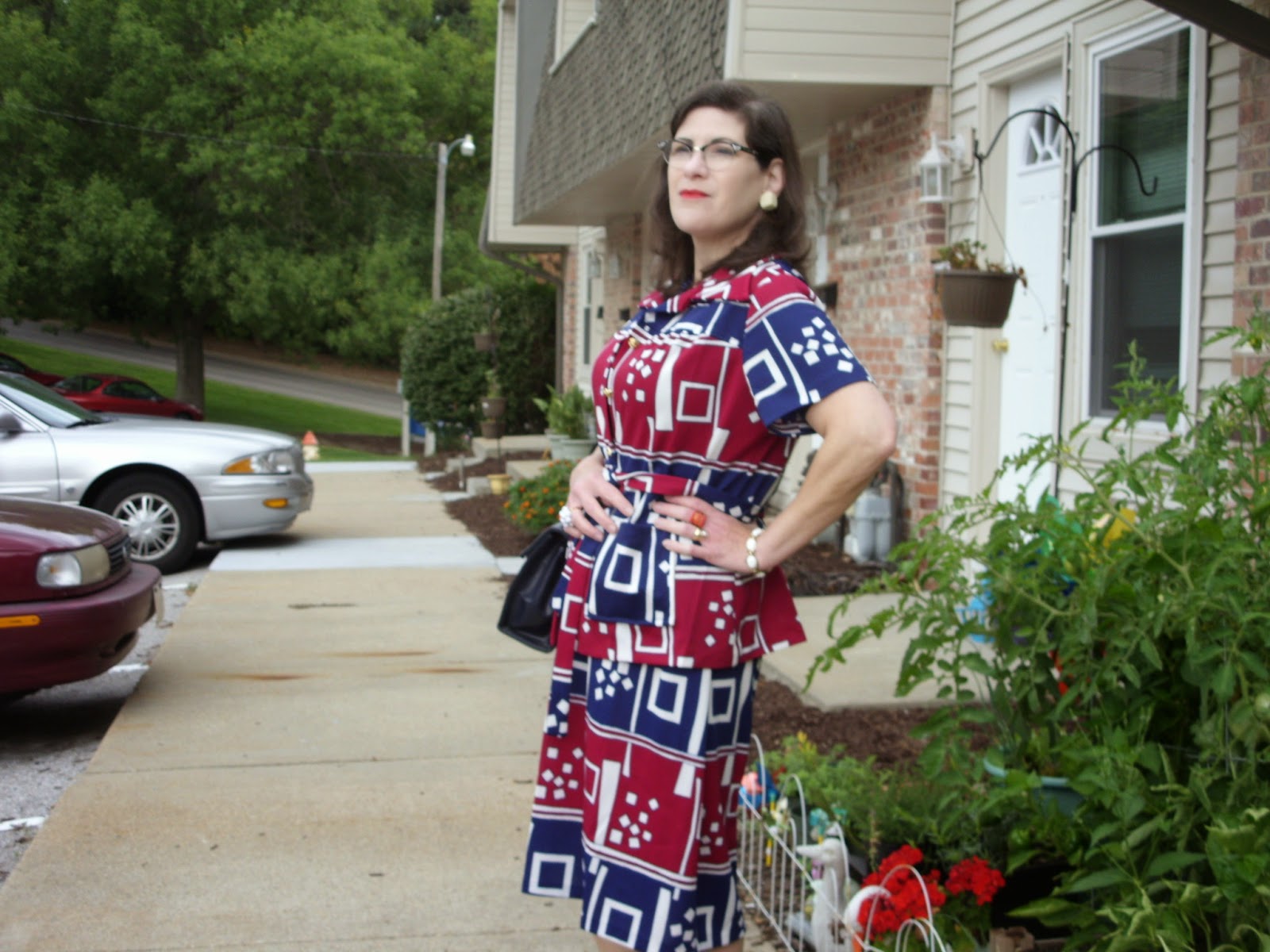 There's a "hawk thing" at Fontenelle Forest tomorrow. Translated, that means volunteers from Raptor Recovery Nebraska stand in a room (over tarps) with screeching, flapping, shitting raptors for people to gawk at up close. Well Danny enjoys it, and the volunteers (bless 'em) enjoy Danny, so I'll camp out in the next room with a book while he "talks shop" with his friends. Since we'll be in the area, a trip to the New Life Thrift will be on the agenda because they have patterns for .10 cents. Last time I scored some 60's Vogue patterns, so it is worth stopping. Mr. ETB is on call until Monday morning, but so far (touch wood) it has been an uneventful week.
Have a lovely weekend.

Dang, your shoes match your purse in totally granny style. Love it. I once had a teacher in high school who promised never to wear the same dress once during the school year. I bet you have this eclectic sort of wardrobe too:)

I think I could do that-at least weekdays without repeating. Maybe? A new blog feature? Our school year officially starts 2 September, though we're essentially back now (no true break with homeschooling).

Goodness, I think maybe that's a good use for Tumblr. Thanks for the idea. As for the matching shoes-I can't help it! I feel all strange when my shoes and bag don't match, like I'm messing with the cosmic balance of the universe or something. I also tend to match my shoes to the hem of my dress if possible. I'm afraid I'm hopelessly middle class when it comes to this sort of thing. We won't even talk about white after labour day...