So, I have a new laptop that runs windows 8...and I hate it. I mean...hate it. after years of Linux based everything, I'm screaming at a screen more than I thought myself capable of. Still, I didn't want to use a desktop any longer (the idea of jumbled cables, monitors, towers, etc. cluttering up my new house was too much) so we've converted to a laptop and a tablet. I haven't seen the tablet since we bought it-Danny took off with it to watch Woody Woodpecker cartoons on YouTube. How can you not have a start button?! I mean, what the hell?

We're just under three weeks to the move. I'm at that stage where I'm tossing shit in boxes knowing it will never be unpacked, just hopefully sorted through next time we move-that's how I ended up with all this crap when we moved from Boston. To be fair, we have filled a skip several times, and donated even more, but some things like papers and photographs seem to multiply in my attic. The new place won't have an attic, but there's a full basement (oh dear...).

We're cooking down the freezer which has led to some interesting combinations at mealtime, and I'm attempting to drink my way through all the put up cordials (hic!).

I have a feeling Windows 8 will work better once I start disabling all the stuff I don't use-but who knows. Anyone else experiencing computer rage with it? I never had this many crashes with Linux.

-and no Prop 8 in California. About time. The locals here are frothing as they won't be able to hide behind "the law says" every time they want to feel justified in their hatred. I'm not going to link to the comment threads-this is a great day, let's just enjoy it. 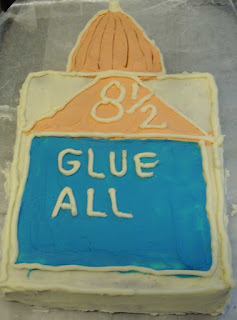 Yes, we celebrate "half" Birthdays-well, Danny's anyway. I asked what sort of a cake he wanted, and he replied, "A glue bottle." You ask, I bake. I made some cookies as well. With that out of the way, I can pack the baking items. Just under four weeks to moving day, now.

We waited in the kitchen for Danny to get up this morning, both wearing Woody Woodpecker masks (thank god for Amazon!). There's something a little David Lynch about two people puttering around like normal in the kitchen wearing cartoon masks (I'm thinking the bunny head people from Inland Empire), but we figure it will give Danny great stories to tell about us when we're gone.