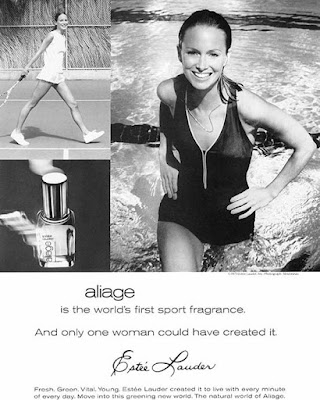 I don't know what you smell like playing tennis, but my personal pong after a few sets wouldn't be improved any with the addition of Estee Lauder's 1972 fragrance, Aliage in the mix. A heavily chlorinated pool probably wouldn't be a good idea either as I've heard mixing chemicals can be dangerous.

The women in my family were devoted Estee Lauder consumers from the cosmetics, to skincare, to fragrance. At Christmas, they would offer a generous "Free Gift" of a makeup set with the purchase of a fragrance. This was great marketing for recently launched scents and it didn't take my sister long to discover Aliage.

In the early 70s we lived in a home where four people shared a very tiny bathroom. Toilet, pedestal sink, and a bathtub completely unsuitable for anyone over 5ft tall, and a window that was hopelessly stuck. I don't remember a fan. Enter Aliage and my teenaged sister who applied fragrance with the enthusiastic spraying of youth, and a nose permanently numbed by the cosmetic surgery my parents forced her to get at 16. Well, she could smell Aliage, anyway.

I suffered from asthma as a child, but in hindsight I think it was probably living in a home with three smokers, a cat I was allergic to, and a bathroom that routinely stunk of Lysol foaming spray cleaner, Herbal Essences shampoo, and Aliage. My lungs didn't stand a chance, and that window just wouldn't budge. My sister had the largest bedroom (my room was practically a cupboard re-purposed into a bedroom when I came along a decade after her) which would have been a perfectly appropriate place to douse herself in Aliage-and the bedroom window opened too!

We all hated Aliage. It gave my mother headaches, my dad coughing fits, and made me wheeze. At least being in a car with her wasn't terrible as you could open the window. And it lasted. Unlike other fragrances that settle down after the inital blast, Aliage's staying power meant gasping from that oakmoss and vetiver assault hours after. I like oakmoss and vetiver. I enjoy green notes, with a bit of nuance. Aliage hits you over the head to stun you and keeps the blows coming long after it should have just grabbed your handbag and run off. If you could bottle a mugging, it would be Aliage.

I have a rather good scent memory. Where others might remember a scent as "floral" or, kind of "spicy", I can recall notes with an almost physical sensation. In my memory I can taste the accelerant from cleaning products sprayed everywhere around me as a child (how any of us survived the 60s and 70s is a miracle). I saw a very vintage bottle of Aliage online at a price I was willing to spend on something I knew I hated, and went for it. Sometimes (not often, mind) I miss my sister.

Yeah. If I was expecting the last 45 years or so to soften the edges on Aliage, or at least the topnotes, that was wishful thinking. The satisfaction of being able to proclaim, "I told you so" when being confronted with my fragrance nemesis again after close to a half century, was quickly interrupted by the rush to open the window. My windows open. Thank God.

"Sport spray?" Do be a sport and spray it far away from others. Do you suppose Aliage was the fragrance that finally convinced the regulators to ban natural oakmoss from fragrance production? I wonder how many others, not typically bothered by oakmoss found themselves making terrible noises at the back of their throats to stop the itching, unable to simply reach a hand down there and scratch their tonsils to pieces. We didn't have liquid Benadryl in the 70s-you had to panic chew a Chloretrimeton and wash it down with a glass of water if you needed to treat a severe allergic reaction. The allergy pills were small and bitter, like me.

The official notes list Rose, but I can't detect any. There's nutmeg in there as well but who'd be able to detect it under all that oakmoss and vetiver? Ordinarily, I like Bernard Chant's fragrances (Aramis, Azuree, Cabochard, Aromatics Elixr) but Aliage is a green note too far. It feels chemical. The Army could weaponise it. A cloud of Aliage over enemy lines would make quick work of a surrender.

My jasmine anosmia that frequenly "turns off" my nose after a few minutes rendering many fragrances odourless (I've yet to be able to smell Chanel No. 5) doesn't seem to be bothered by the jasmine in Aliage. Because the Universe hates me. Thanks, Universe. That said, I still don't catch anything floral in Aliage. This is a power-green fragrance for people that like to smell like a tree. A very, very, mossy tree. It could be a great fragrance for Morris dancers, at least for for the person playing the Green Man. I don't suspect that's the "Sport" Estee Lauder had in mind when marketing Aliage.

Eventually, my sister moved on to Chanel No 19 and we could all breathe again. I don't love No.19, but it was such an improvement over the Aliage that I didn't dare say a word. Aliage is still made, but it is a completely different fragrance, so much so that Estee Lauder really ought to change the name. The new one isn't anything I'd wear, but if I had to share a small bathroom with someone applying it in abundance, I wouldn't complain.

I don't know that I'll ever want to wear Aliage, but it is an interesting thing to have in my collection, if only to remind me that my scent memory is accurate-acutely so. I could make a determined effort to wear it for a week in a better attempt to understand it, but that's unlikely. This one's going in a box with a latch lest it get any ideas of escaping. 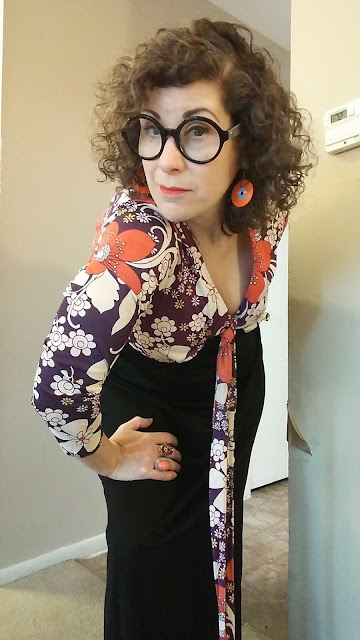 Ever notice you favour certain poses in photographs? This is clearly one I employ regularly as it permits a close-up whilst fitting most of my body into the picture. I achieve this by propping my phone against a mug on my dining room table, and using the timer. I like how it makes me look a little like a giraffe with an oversized head! 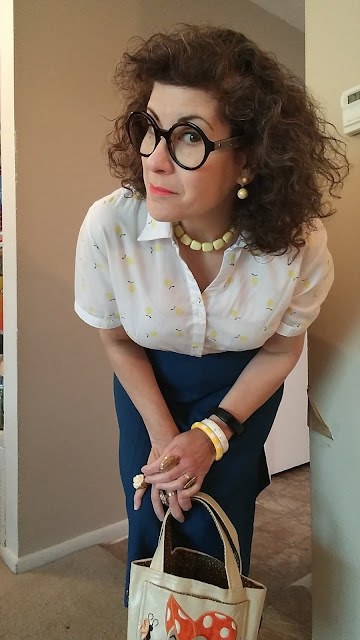 Sometimes it comes across less giraffe, and more, "Mummy needs a word with you." 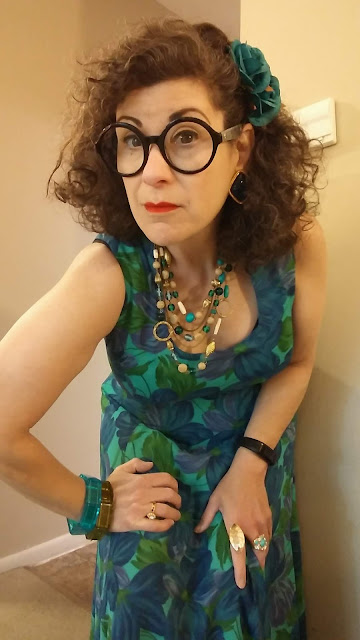 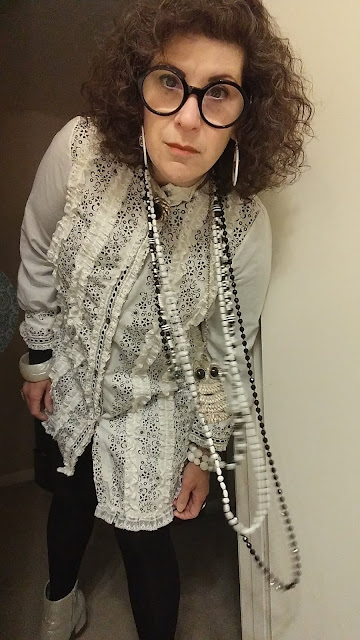 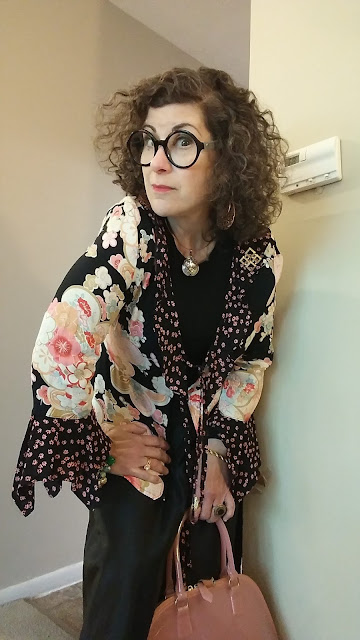 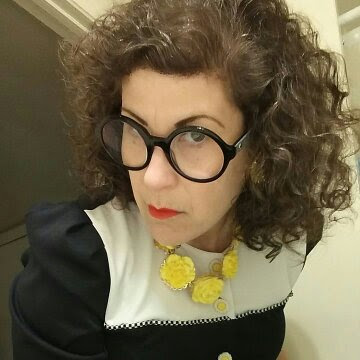 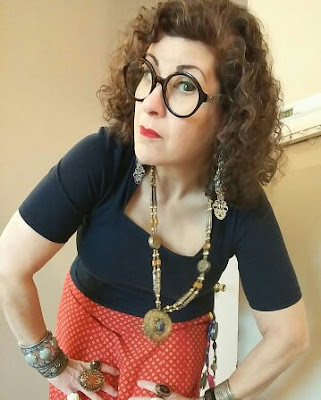 Holding up the wall. 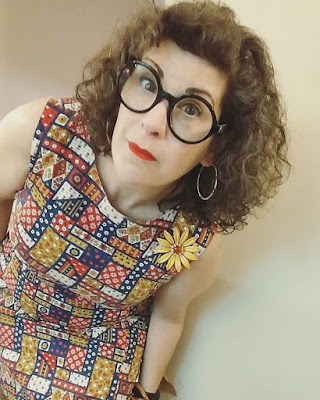 Looking at you, and thinking stuff. 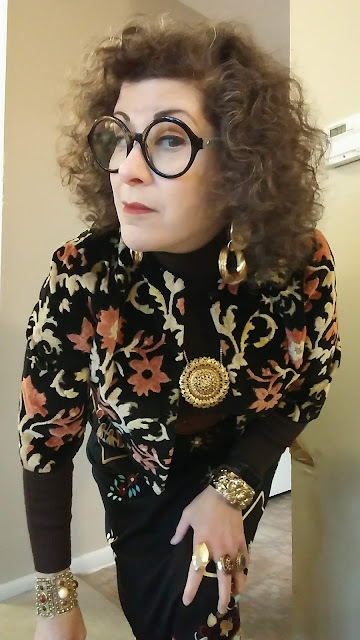 Thinkin' stuff with my big head. 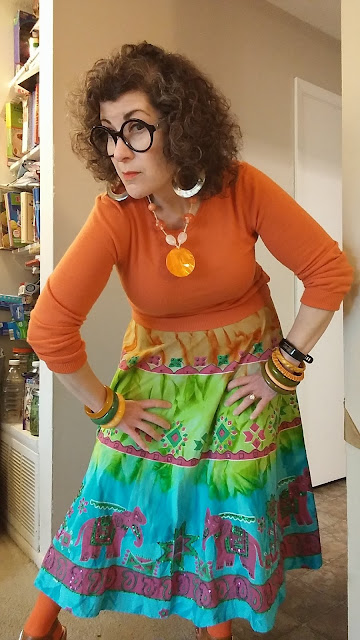 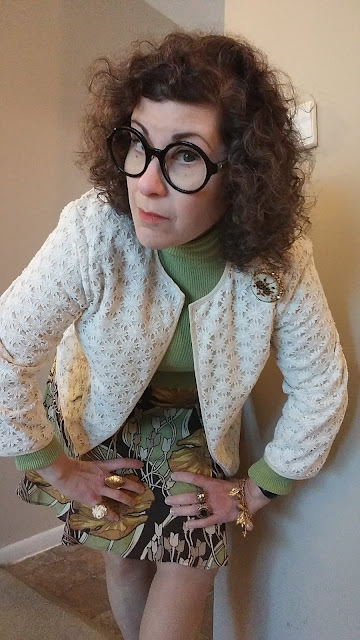 Or Mothra. You get the idea. 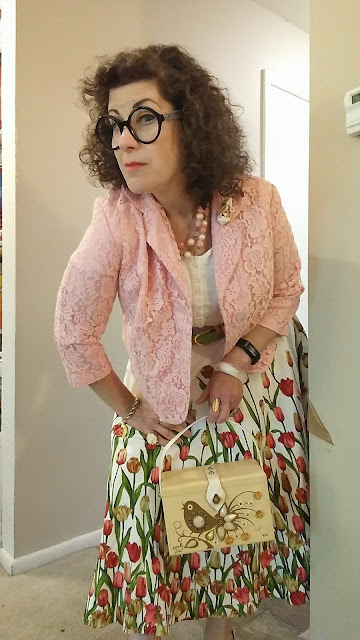 You could say I'm in a bit of a pose rut. 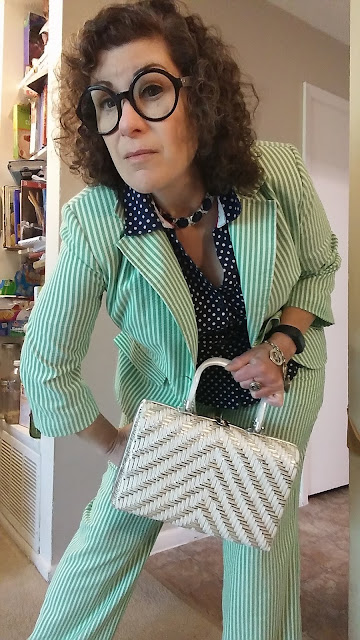 Or lacking in imagination. 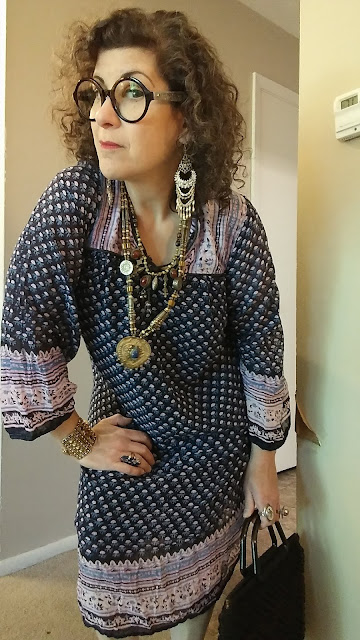 I prefer to let the clothes be the focus. 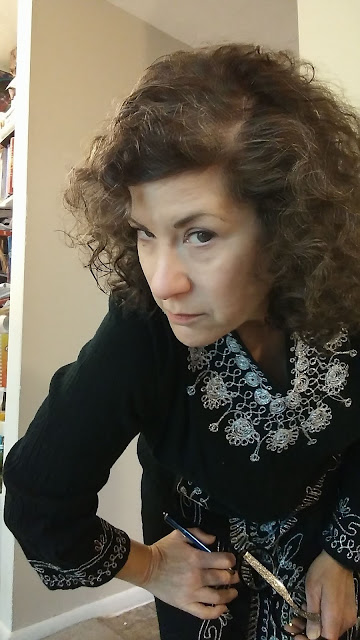 Even if my big head tends to get in the way. 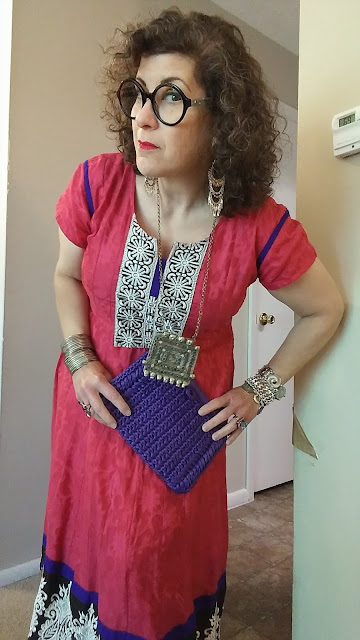 At least you can see my earrings. 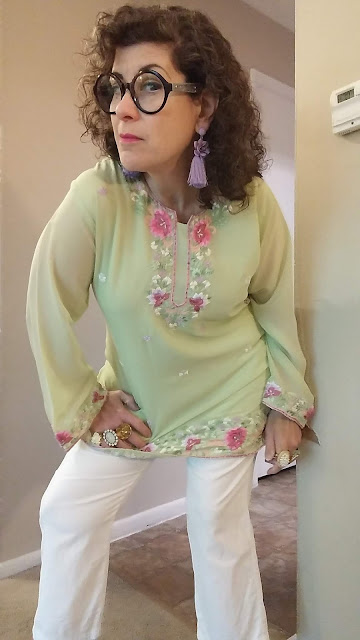 And let's face it, my earring collection is probably better than my clothing. 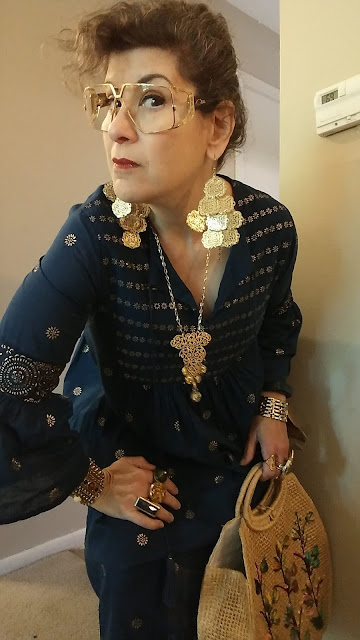 What about you? Have a favourite pose?

Thanks to everyone for your well wishes. I am doing much, much better. I hope you'll pardon the photo heavy post as I don't quite feel like I have my writing voice back 100%. I'll get there. I have some perfume reviews coming up. I recently purchased a 1970s bottle of Estee Lauder Aliage. Oh, the memories in that nuclear grade fragrance! Anyway, something to look forward to.

She's a Knockout, or Knocked Out Anyway As a child, I suffered two serious concussions, but have only vague memories of the aftermath. Saturday afternoon, I fell going to my car. I'm not entirely certain what happened, or how I ended up bruised on the back of my arm and head as I don't remember being knocked out, though it seems I was, if only momentarily. I quickly got myself up, established nothing was broken and drove home. Yes, really. I was alone and though it all happened so quickly, I decided all was well. It was is not. By the way, because I know someone will ask-I was wearing flat shoes! I never lay myself out wearing platforms😀

My last concussion happened playing backyard baseball. In one of those classic, "I've got it-I've got-it-WHAM-into a brick wall" moves, I managed to knock myself out cold. Don't remember if I caught the ball. 45 odd years on, I gave myself an injury going to a parked car, but went to a baseball game that evening. I felt fine-still had no idea I'd hit my head. About 8 hours on from the fall, I was feeling terrible, and the drive home from the ballpark seemed unusually dark-well, it was as I'd neglected to put on the headlamps. I've been driving since I was sixteen-as far as I know this was the first time I'd ever driven down a rural road without lights. By the time I made it home I was dizzy, nauseated, and shaking from cold. Still unaware that I had a concussion, I went to bed. Yes, that was stupid.

By Sunday, I was putting things together. What I didn't put together was that my arthritis medications are incredibly dangerous to take with a concussion. Monday, I caved and went to see my GP who, horrified that I didn't have myself seen immediately in the ER on Saturday, ordered a brain scan to see if my brain was bleeding. It was not, and I am incredibly thankful. I had to immediately stop all my medications as the risk is still there, but as brain injuries go, I was lucky. Due to the trauma of the fall, my immune system seems to have gone into fight mode, so I'm having a flare. Predictable, but still so disappointing.

It is now Friday and I still haven't a clue what happened, or how long I am going to feel this way. I can't sleep, but I'm tired constantly. When I do sleep, I have what are probably the strangest dreams of my life.  I am nauseated, dizzy, weak, feel slightly stoned in that time delayed sort of way, and have been crying over everything from unloading the dishwasher to watching a robin struggle to eat a raisin from the feeder. In other words, this ain't me. I've been wearing the same Everlast track suit for days and don't anticipate getting dressed anytime soon. I know I'm improving, but it is slow going and after six days at home, I'm getting impatient. I can't drive until I've been symptom free for 24 hours, and I'm not all that comfortable with the idea of driving anyway after that ride home Saturday night.

I'm supposed to be resting my body and my brain. I took that as don't try to do anything too complicated or upsetting, so I've been avoiding news in favour of reading Tumblrs. I adore Tumblr (mine is HERE). Sure, it can be a hellsite at times, but where else can you look at people's horrible thrift finds, watch videos of pet birds (Birbs!) doing silly things, or scroll through what amounts to teenagers ideas of what the 60s and 70s were like in a sort of online scrapbook. Picture after picture of crazy fashions, bands you'd forgotten, advertisements, home decor, etc. Perfect for a brain that needs to heal-nothing too challenging there.

So that's about it. I have some posts half-written that may or may not ever end up published. I am trying to get caught up with all your blogs, but I hope you'll forgive me if I don't comment on them as I'm really straining for words at times.

I hope to be back to normal soon, or at least getting dressed.