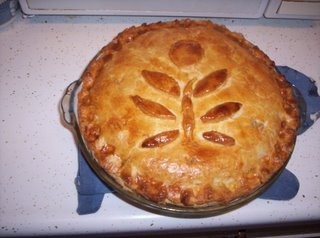 This meatless pot pie is a terrific budget stretcher. If you’re like me, there are always a couple carrots and a small handful of frozen vegetables lying around waiting for a use. I make this pie with whatever I have on hand (this week it was carrots, frozen lima beans, tinned corn and dried onion). This is one of the few times I will recommend using tinned soup for cooking as it just works so well. Don’t add additional salt though-the soup more than takes care of that.

Line a pie pan with the bottom crust. Preheat oven to 375 degrees F. Mix soup, spices and veggies together, Add fake bacon last. Place on top crust. Decorate and vent as desired. Brush with egg wash. Bake for about 45 minutes checking every 5 minutes after twenty (it will vary quite a bit depending on the style of crust you make).

Let stand five minutes before cutting and serving. I always serve mine with a spoonful of Dijon mustard.
Posted by Goody at 6:44 PM No comments: 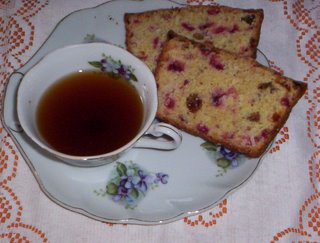 This is not your typical cranberry/orange loaf. The addition of ½ cup flaked coconut and ¼ cup golden raisins give real depth to a commonplace quickbread. I also think dried cherries would work well with this, possibly even a couple finely chopped pieces of crystalised ginger. I find that there is always a bit of coconut left over in recipes and it tends to get dried out in the back of the fridge until I stumble upon it one day. This is the prefect recipe for that slightly dry coconut that you just cannot bear to toss away.

Preheat oven to 350 degrees F. Grease a loaf pan (9x5). Mix dry ingredients. Add orange juice, zest and egg. Add cranberries, coconut and raisins. Tap pan to make certain air bubbles are out. Bake on centre rack of oven for 55-60 minutes or until it passes the toothpick test. Cool in pan 10 minutes, then on rack. Slice when cool.
Posted by Goody at 6:31 PM No comments: 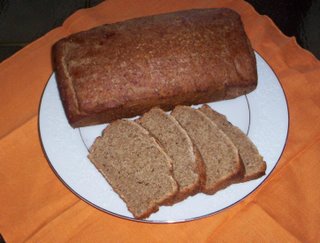 This is the recipe for black bread in Beard on Bread. I did not care for it as I found it too heavy and dense. My husband however, really enjoyed it claiming it is what he typically thinks of as “rye bread.” It was difficult to knead by hand, though I am admittedly, rather arthritic. If I were to make it again, I’d certainly use a few tablespoons of vital wheat gluten to lighten it up a bit. I froze one of the loaves and it will be interesting to see how well it defrosts.

Add cornmeal to the cold water and mix well. Pour into boiling water and stir until thickened. When thick and bubbly, stir in the butter, salt, seeds, cocoa and coffee.

Dissolve the yeast in the warm water and add to the mixture.

Blend in the flours adding liquid if needed until you have a sticky dough. Knead on a floured board until firm and elastic. Place in a well buttered bowl, turn to coat and cover. Let rise until doubled (about 2 hours).

Before baking, brush with egg wash. Place in pre-heated 375 degree F. oven for 50-60 minutes or until it sounds hollow when rapped.
Posted by Goody at 5:54 PM No comments:

It figures, World Bread Baking Day and my stand mixer is broken! The gears made an awful noise one day last week, and then it stopped turning. I did knead a loaf of “continental style” bread by hand for tonight’s dinner but it is nothing spectacular. One rise-quick and easy.

Last evening I made biscuits to go with black bean soup. I suppose corn bread would have made more sense. I thought they were mediocre but I don’t honestly have much baseline for comparison. I’ve spent most of my life in Illinois and Massachusetts-not exactly biscuit towns. Ay least they weren’t hard. My son seemed to enjoy them as the size was simple enough for a 22 month old to manage.

I’m sort of hoping the mixer cannot be repaired so I have an excuse to start looking for a used Hobart countertop model (can’t afford $2,000. for a new one). I always swore if it came to purchasing a commercial mixer I’d better set up business, but then I swore the same about building a brick oven outside which I’m now giving serious consideration to.

So here’s what I did to make my “continental bread” (a VERY) modified version of James Beard’s recipe in Beard on Bread.

Proof the yeast in water and sugar. Mix in as much flour (and the salt) as the liquid will take and knead about ten minutes until smooth and elastic. Place in buttered bowl, cover, and let rise until doubled (1-2 hours). Preheat oven to 450. Gently degas and shape into one large loaf. Score. Transfer to a baking sheet that has been tossed with cornmeal. Use whatever technique you prefer for getting steam into your oven (I pre-heat a pan and toss the water in that). Place bread in and after twenty minutes, turn and continue baking another 10+ minutes or until it passes the hollow test or registers an internal temperature of about 100 degrees F. 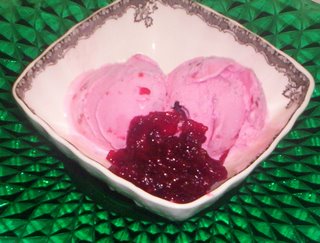 In advance of Canadian Thanksgiving, I thought I’d offer my recipe for cranberry ice cream ( Sigh, I was going to do cookies as I have a wonderful old maple leaf shaped cookie cutter that was a souvenir of a trip to St. John many years ago, but I’m afraid it must have been misplaced when we moved. Guess I’ll just have to go back and get another…)

1 cup of prepared cranberry relish ( 1 package cranberries cooked in 1 cup sugar and 1 cup water, simmered for ten minutes and then permitted to cool at room temp).

Mix everything together and process according to your ice cream maker’s instructions. My machine is sort of wimpy, so I stir in the majority of the cranberries afterward.

You can make this as ice-milk, which I frequently do. For extra tartness you can add a bit of orange zest (omit the vanilla).
Posted by Goody at 7:04 PM No comments: 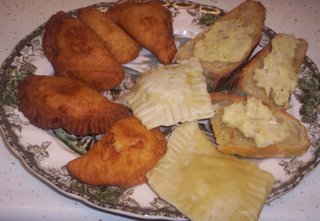 On large croutons brushed with olive oil, mixed with mashed potatoes and used to stuff ravioli, and fried in a dough similar to what is used for samosas.


I still think a better use for salt cod is in chowder, but this was fun to experiment with. Unfortunately, I used a pound of salt cod and now have quite a bit of it as it reconstitutes to about double its size. Ooops.

The basic idea is to soak the cod for a couple days changing the water a few times each day. Then poach the cod, shred it, mix it with 1 cup warm milk and about a cup of warmed olive oil with a few garlic cloves (alternating until all oil is gone-you may not need all the milk). Adjust salt and pepper, maybe a bit of nutmeg. A stand mixer will help mash the fish better. And that's pretty much it. If you reheat it, don't microwave it (really, trust me on this) but use a double boiler or place a bowl in a strainer basket over boiling water. Once the fish was poached, the process went rather quickly.

I tried stretching my imagination for other uses, but couldn't come up with any. As it works fine for ravioli, I don't see any reason that it wouldn't work for pierogi. Let me know what you come up with if you try it.
Posted by Goody at 6:17 PM No comments: 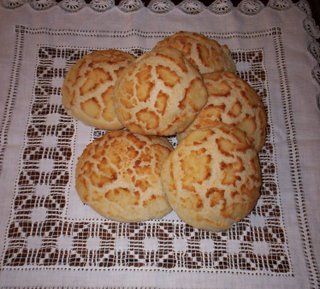 Not only was this quick (by yeast bread standards) with two short rises, but simple enough to put together. The recipe comes via Bakingsheet and may be found HERE.

One note:
In the recipe for the topping it was not mentioned how to put it together. An experienced baker would read the list of ingredients and know to proof the yeast in the warm water and sugar, adding the rest of the liquid items and then the flour-I think the novice might be confused. So, that’s how you do it.

I can see making this often, though I might make the rolls a bit smaller-recipe makes six.
Posted by Goody at 11:50 AM 1 comment: 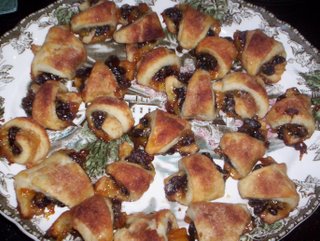 Cool on racks and try not to eat them all at once!
Posted by Goody at 7:16 PM No comments: 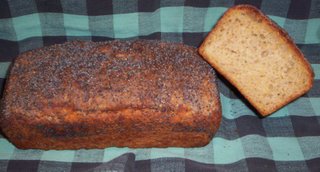 I really don’t understand why people are so fanatical about this bread. It’s pleasant, and has a nice texture and crunchy crust-but it’s certainly not the best bread I’ve tasted. I also don’t understand why it is considered “a lot of work” to make. Outside of two 90 minute rises, it really wasn’t any different than any other loaves of bread-save for some odd ingredients. I suppose if you always have wheat bran and buttermilk on hand then it wouldn’t be much trouble to toss this bread together without planning. I guess I’ll make it again as I now have a large box of wheat bran with no other use in mind (a blurb on the box suggests using it to stretch ground beef in meat loaf, but I think that sort of borders on heresy (like when my mother would “stretch” the salmon patties with a small tin of tuna).

The recipe may be found HERE.
Posted by Goody at 8:00 PM No comments:
Newer Posts Older Posts Home
Subscribe to: Posts (Atom)