America is the Home of the Hypocrite 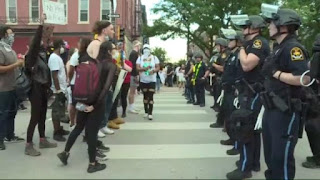 We’ve had quite the past couple weeks in the US. Only about 400 years overdue, but to hear some people talk you’d think Black people asking not to be killed by police is some sort of unreasonable request.
I’ve taken a couple weeks off blogging to give the attention to voices that need to be heard. I doubt it made much difference as I don’t have thousands of Instagram followers, but it felt like the right thing to do rather than posting black squares, or pictures of Eldridge Cleaver. Not that there’s anything wrong with posting pictures of Cleaver, but you’d get more out of reading Soul on Ice. Short book too- you could read it in an evening. Anyway, stepping aside felt like the right thing to do.
Locally, we had cops lobbing tear gas at peaceful protesters, a Black protester killed by a white bar owner,  the  National Guard in the streets of Omaha, a curfew, and very little change on the part of the police department. The overall tone coming from the city is that they just want things to go back to normal. But normal is centuries of systemic racism and we already know that’s the problem.
So that’s where we’re at. Oh, and Corona is still infecting and killing people but the state has opened everything back up because...well, red state. And late capitalism.
I did learn  firsthand that you don’t need to be directly tear gassed to feel the effects. So that was a educational.
In other news, blogger updated their interface and I’m trying it out posting this from my phone. I expect issues, so let me know.
Posted by Goody at 8:07 PM 11 comments:
Newer Posts Older Posts Home
Subscribe to: Posts (Atom)