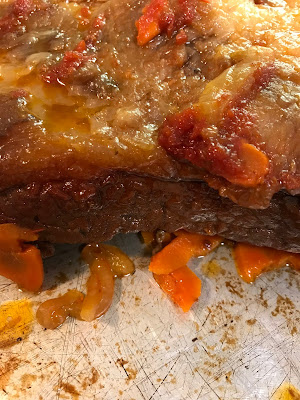 \
As Rosh Hashanna is coming up (Sunday at sundown) I thought it might be a good time to offer up a brisket recipe for anyone faced with a giant slab of meat and no idea how to cook it. I've been a vegetarian since the early 80s, and I understand how intimidating that can be. Maybe this is your first year hosting the dinner, maybe you just bought a brisket because it was inexpensive and now you don't know what to do with it?  It doesn't matter why you need to cook it, if the fact is you're confronted with what looks like a terrifyingly large cut of beef.

Hopefully, your butcher has cut the brisket into a "Flat" and a "Point." The point is, as the name suggests, the pointed side of the brisket. The point has less beef and more fat, so I have it wrapped for the freezer and keep it for a smaller family meal during the year. It does well with "Oven-barbecue" style recipes, and that sort of thing. If your butcher hasn't done this, just whack it about 1/4 of the way down and wrap it tightly in freezer paper. Some butchers will sell you just the flat, but at significantly higher cost. You do what's best for you. If you're buying an already trimmed flat, look for one with a good layer of fat. because brisket is a tough cut of meat, you'll want that as a sort of insulation for the several hours of roasting. You can always trim it away after cooking. The fat that melts into the roasting pan juices can be cooled and skimmed when solid and used for roasting potatoes-and it keeps forever in the fridge. Fat is your friend.

The only way you can ruin a brisket is by cooking it at too high of a temperature. As cuts of beef go, it is quite forgiving. Essentially, you want some fat and some liquid to slow braise it. I use wine for the liquid, but there's no reason you couldn't use grape juice, or broth. If you're preparing this for the High Holidays, I'll warn you that people tend to prefer what they grew up with. In other words, this isn't the time go get creative with sriracha sauce, It might be delicious, but you still have the point in the freezer to experiment with later on in the year.

My mother wasn't terribly interested in cooking. That's not a criticism, it just wasn't her thing. What she lacked in skill was balanced out by the fact we had a great butcher who would write down recipes for her. Everyone should have a butcher like Vic. I'm pretty sure Vic was Italian, but when you work in a Jewish neighbourhood you get a feel for the local tastes. His holiday brisket recipe has been standard in my life for more than 50 years. This is a textbook illustration of the expression, "If it ain't broke, don't fix it." I've resisted the urge to tweak it over the years as you can't improve on perfection. Vic is probably long gone, but if I have anything to do with it, his brisket recipe will live on.

The beef needs to marinate 24 hours in the fridge. I do it right in the roasting pan so it can go straight to the oven. Make sure to leave space for it. I also like to cook it a day ahead as cold brisket is easier to slice thin, and you get a chance to skim the fat off the gravy. Re-heating the slices in gravy keeps them from drying out. If you're planning to serve roasted potatoes, the flavoured fat is a nice addition.

About a 5 lb. piece of brisket, fat on
1/3 cup lemon juice
2 cups concord grape sweet wine (Mogen David (or if you were our housekeeper, "Morgan Davis" which sounds like a law firm) is my standard, but anything works) divided
1/4 cup corn oil
2 teaspoons salt
An entire bottle of chili sauce (I prefer Bennett's but in Nebraska we can only get Heinz)
2 large onions, quartered and thinly sliced
6 garlic cloves, chopped
2-3 large carrots, thinly sliced
1 teaspoon sugar
a good grind or two of black pepper
1 bay leaf

Lay the brisket in a deep roasting pan, fat side up. scatter on the onions, garlic, and carrots. In a large bowl, whisk together the lemon juice, 1 cup of wine, corn oil, salt, sugar, pepper, and bay leaf. Empty in the bottle of chili sauce and the use second cup of wine poured into chili sauce bottle to get out the rest. Pour it all over the brisket.

Cover the roasting pan tightly with foil and let marinate 24 hours in the fridge. I never bother turning mine, but if you do, just remember to have it fat side up to cook.

Cooking day:
Heat the oven to 325 degrees F. Place the entire foil covered pan in the oven. If it has a lid, use that as well. You want a tight seal. Cook 2 hours at 325 degrees F. Then, reduce heat to 300 degrees F. for remaining two hours. At this point carefully remove it from the oven and check for tenderness. Be careful not to give yourself a steam burn opening the foil. A fork should easily pierce the meat. If not, stick it back in for another half hour. Carefully remove the brisket from the roasting pan to a plate or baking sheet to cool before wrapping tightly and placing in the fridge overnight. Strain out the vegetables from the gravy and reserve (those onions and carrots are full of flavour and you'll want to serve them later with the sliced brisket). Chill the liquid gravy. When it is cold you should be able to skim the solid fat easily. The beautiful orange colour it gets from the wine and chili sauce makes the most gorgeous roast potatoes.


Use a serrated knife to cut the brisket thinly against the grain. Re-heat in a pan with the gravy and some of the vegetables. Brisket keeps well, and makes a lovely cold sandwich on the holiday challahs with raisins. You did bake challah, didn't you? 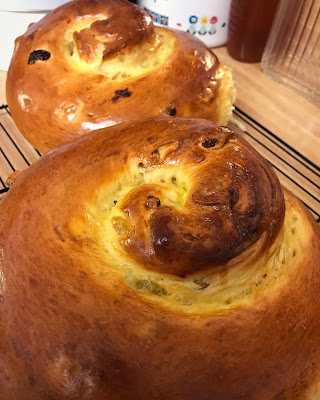 Thanks, Vic for another successful holiday brisket!

Look What the Postman Brought From Bibi 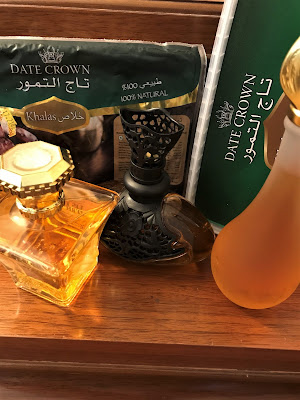 Not only am I going to be dining on fancy dates from the UAE, I'm going to smell delicious as well. There's a third bag of dates not shown because we've already devoured a good portion. Lugging all this from Nepal must have been a hassle, and just wanted to say how much I appreciate it. Blogging has introduced me to the most wonderful people. 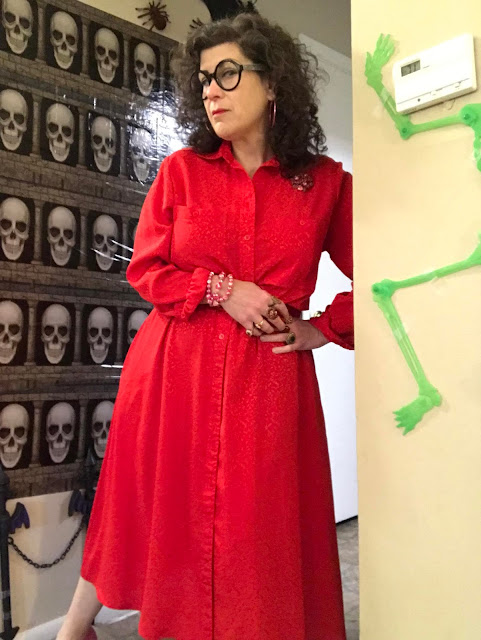 In other news, Goodylands will be going live sometime in the next few weeks. I'm still building the site, but hopefully you'll soon be able to dress like Goody because she'll be selling you vintage clothing. I'm focusing on plus sizes to start, though eventually I'll include straight sizes as well. I might do that as a sister site, or on ebay. I've never liked being forced to scroll through listings that won't fit my big ass, and I'm guessing other fat people feel the same. I'm going to be offering larger accessories as well. As it gets closer to launch, I'll keep you updated. Right now I'm focused on learning to use a steamer, taking decent photos, and trying to make the Shopify store not look like someone in their 50s made it (yes, I'm aware of the running jokes about baby boomers that can't use tech).

I know this blog has been neglected of late, and I do appreciate everyone taking the time to come here. If you're primarily interested in outfit photos, I post those most days on Instagram. I'm @goodymcgoodface. You can view the posts without joining though you won't be able to comment. I'm also on Tumblr as @goodymcgoodface, though who knows how long Tumblr has left as a site. I really use that one to re-post things that amuse me.

That's about it for now. Thank you with your patience as I switch gears yet again.

We have a winner! 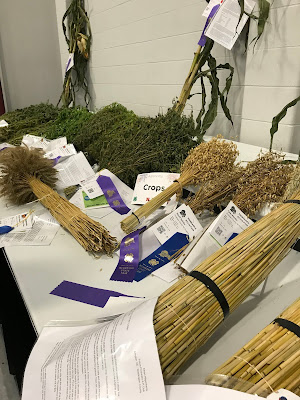 Congratulations, Beth!
I know I have your address somewhere in my email but can you re-send it to me so I'm certain it gets there?

Thank you to everyone that entered. Let's do it again next year!
Posted by Goody at 7:01 AM 3 comments:
Labels: State Fair
Newer Posts Older Posts Home
Subscribe to: Posts (Atom)