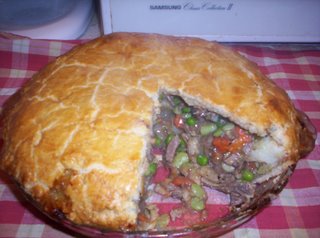 This is a recipe for a day when you have time to devote to cooking.

For The Pie Crust:

Mix flour and salt.Cut in shortening. Combine the rest and stir into flour/shortening mixture. Let stand a few minutes before rolling out.

Dredge the neck bones in flour.
In a large, heavy bottomed pan (enameled dutch ovens work well for this) brown over medium heat in a bit of oil. Remove to plate as they finish. Into the fat, drop the onions, garlic, turnips and carrots to saute for a few minutes. Turn heat to low, and return lamb to pt along with spices and water. Bring rapidly to a boil, and then bring down to a very low simmer (just breaking bubbles on the surface). Cover, and cook for a total of four hours, checking hourly and stirring. You may need to replenish water as it cooks down into gravy, but don't use too much.

When meat is tender (about four hours), remove to a cutting board and let cool slightly before removing meat(or you'll burn your fingers). Do this carefully as there are small bones in the neck pieces. Set the meat aside. Drain the gravy through a strainer and remove pieces of onion, garlic, carrots and turnip-set aside. Remove the bay leaves and discard. Combine vegetables and meat in a bowl and set in the ice-box. Reserve gravy (a measuring cup works well) and keep cool as well.

Assemble pie crust. Mix gravy into filling mixture and reserved potatoes, peas and lima beans. Use only enough to moisten (not drown) the filling. Cover with top crust, brush with egg yolk. Make cuts to vent pie and bake on the centre rack of a 350 degree F. oven for approximately an hour, checking every few minutes after the first half hour. Let stand a few minutes before cutting and serving.
Posted by Goody at 11:30 AM
Newer Post Older Post Home