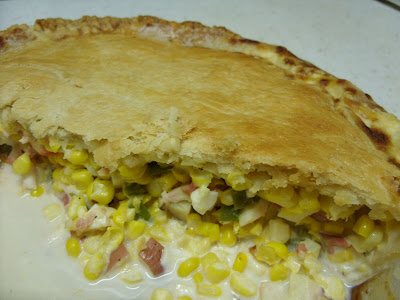 The filling for this pie is the star of the dish, and the sauce is really little more than milk and flour. If you prefer something thicker, add more flour or make a rich white sauce. The boys both seemed to think it was excellent as it was, but they don't have the same expectations for pot-pie type dishes that many people do. It isn't a matter of right or wrong, so do what seems correct for you.

I had some tender, fresh Borlotto beans that I blanched, and added to the pie, and I used a few scatterings of imitation bacon bits, but I'm sure real bacon would be better, and the boys didn't seem to think the beans added much save for some colour.

The recipe comes from Amish and Mennonite Kitchens, Pellman and Good. The crust recipe is my own.

Combine flour and salt. Cut in butter until fine crumbs. A tablespoon at a time, toss on the water until you can bring the dough together in a ball with your hand. Divide in two and let rest a few minutes before rolling out.

Line the bottom of a deep pie plate with one crust. Pile in everything except the flour and milk. Scatter the flour on top of the vegetables and pour on enough milk to cover the vegetables. Cover with top crust. Crimp.I brushed mine with some cream for appearance, but do as you like. Vent.

Place on a baking sheet with a rim (it WILL leak, but the washing-up is easy with hot water). Bake 30-40 minutes (mine took closer to an hour) or until crust is browned and milk is bubbly throughout. I served mine still warm, but not hot.
Posted by Goody at 5:27 PM
Labels: Amish, Pot Pie