What Were You Expecting, A Grass Skirt? 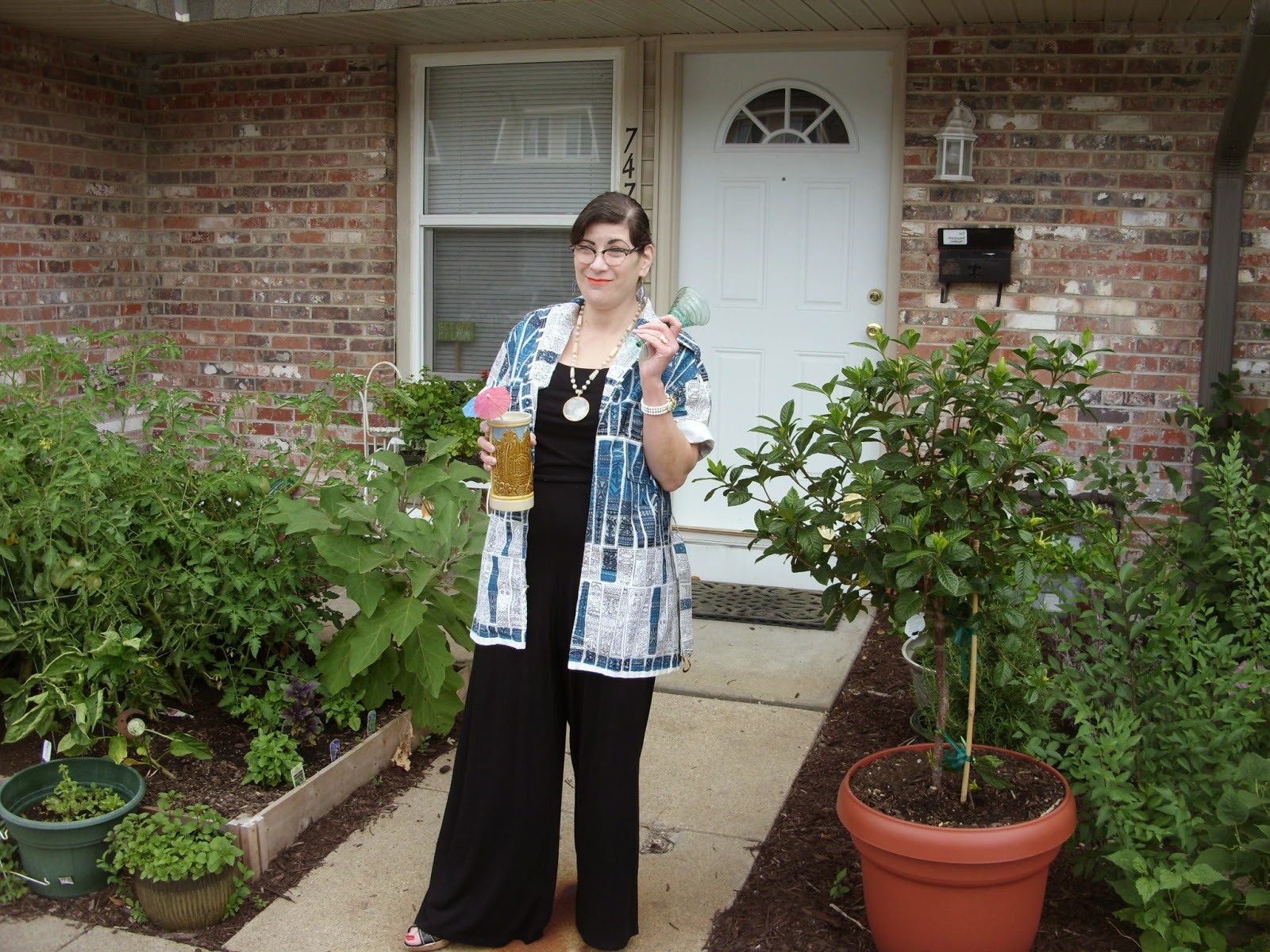 Aloha from my Omaha paradise. I've been accused of being a pessimist but... 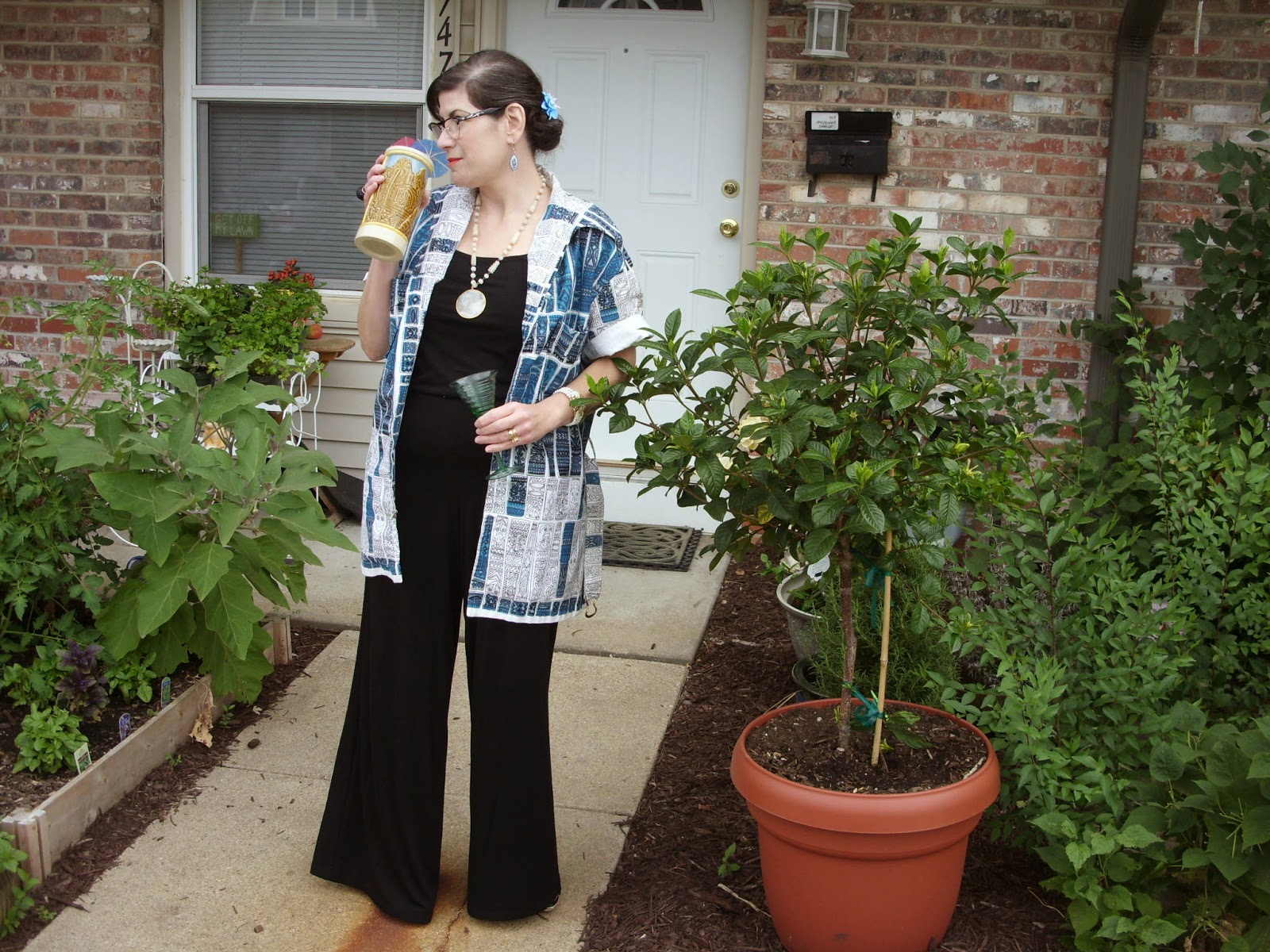 The glasses really were empty! It was nine in the morning, but I'm not really a tropical drink sort of woman anyway. Bitchin' Tiki glass though (I have a second) from a Polynesian restaurant in South Dakota. Yeah, I know that's a lot to wrap your head around. 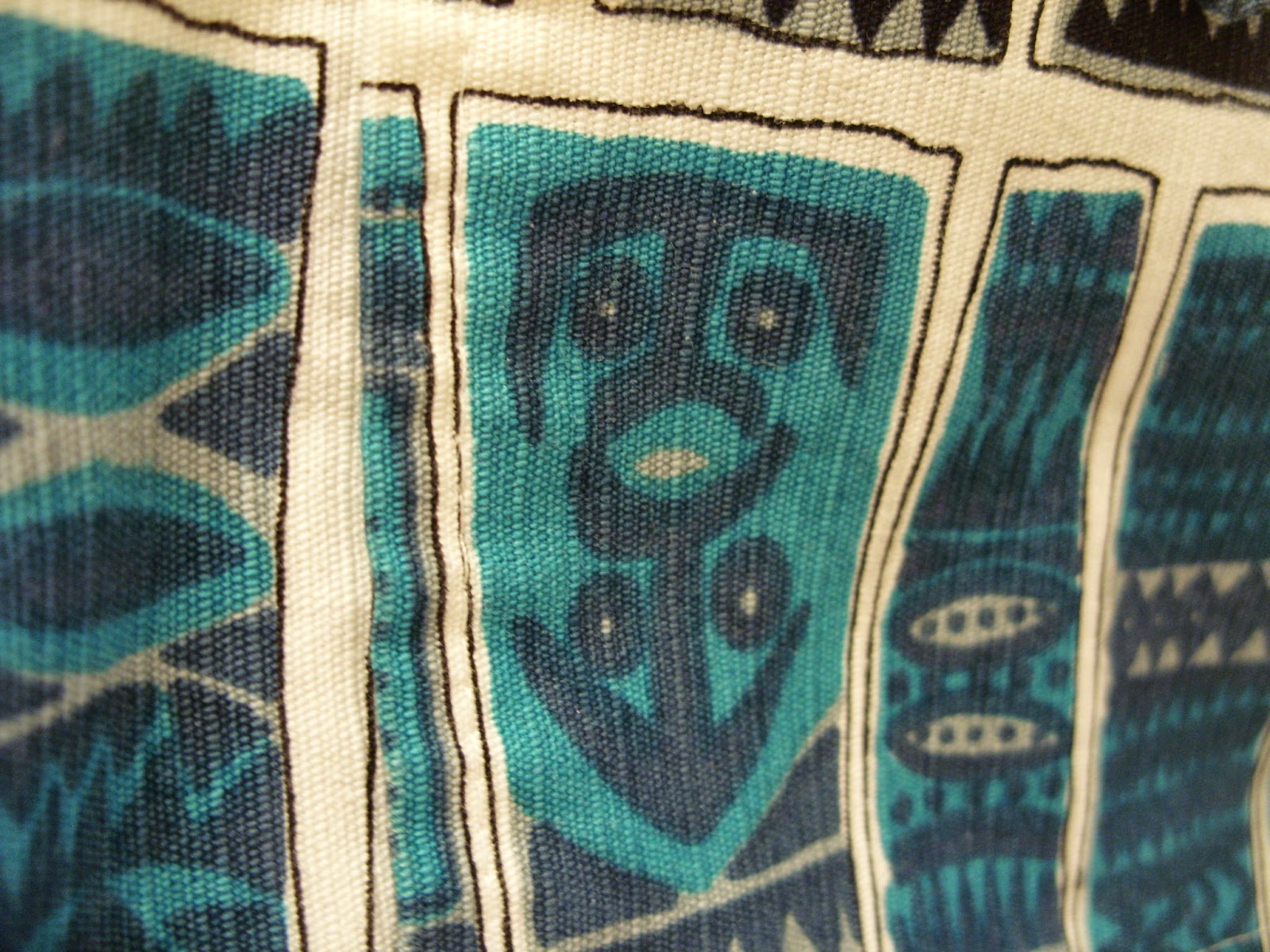 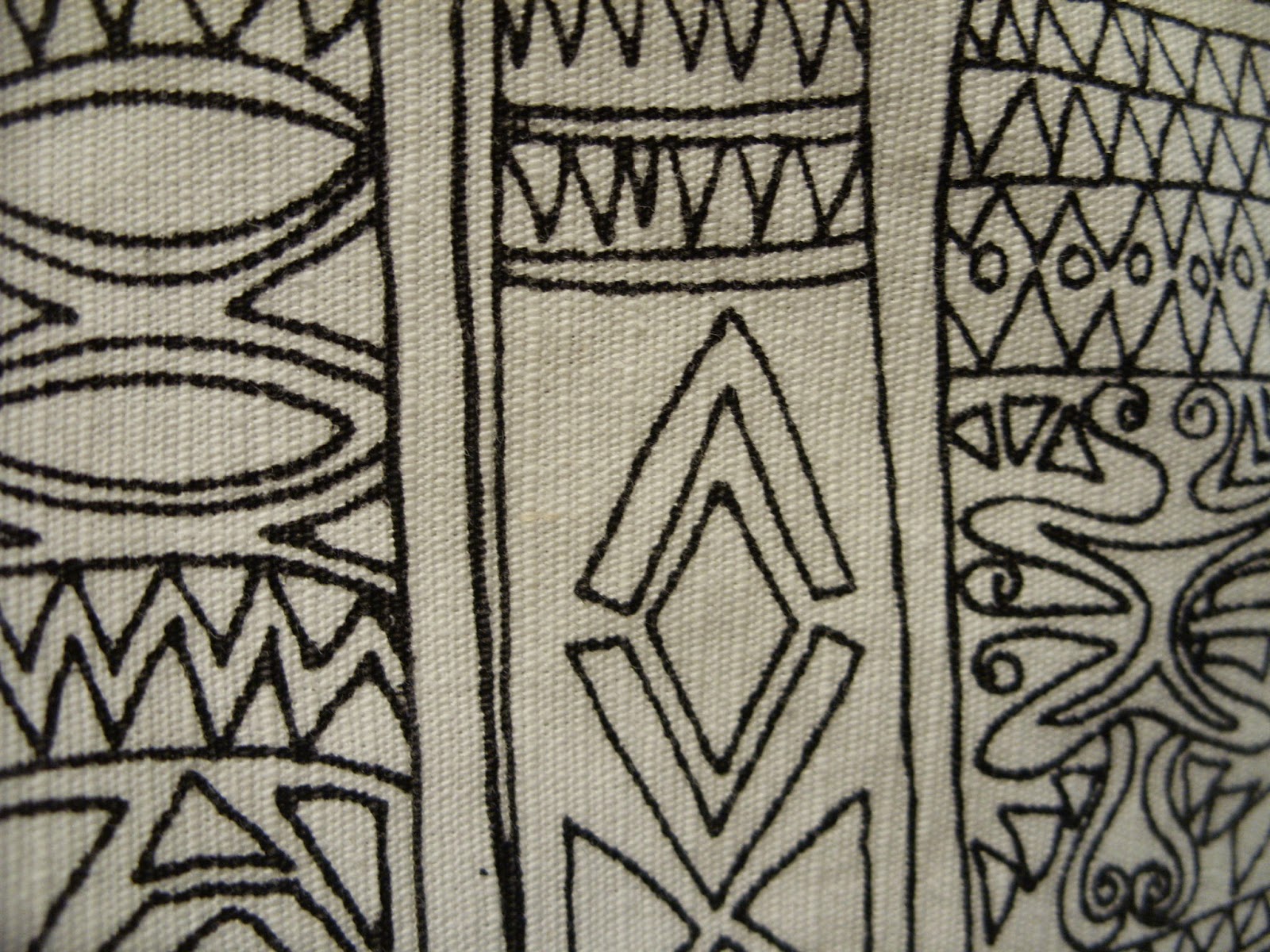 I saw this jacket sitting un-loved on a rack at Hand-Me-Ups, and knew it was coming home with me. I wore it today for the sake of photos, but this will be packed away for Danny when he's a bit taller. In the event he takes exception to a belted Hawaiian shirt from the 60's, then maybe I'll sell it, but I do think it is best worn by someone tall, thin, and wearing surf shorts. 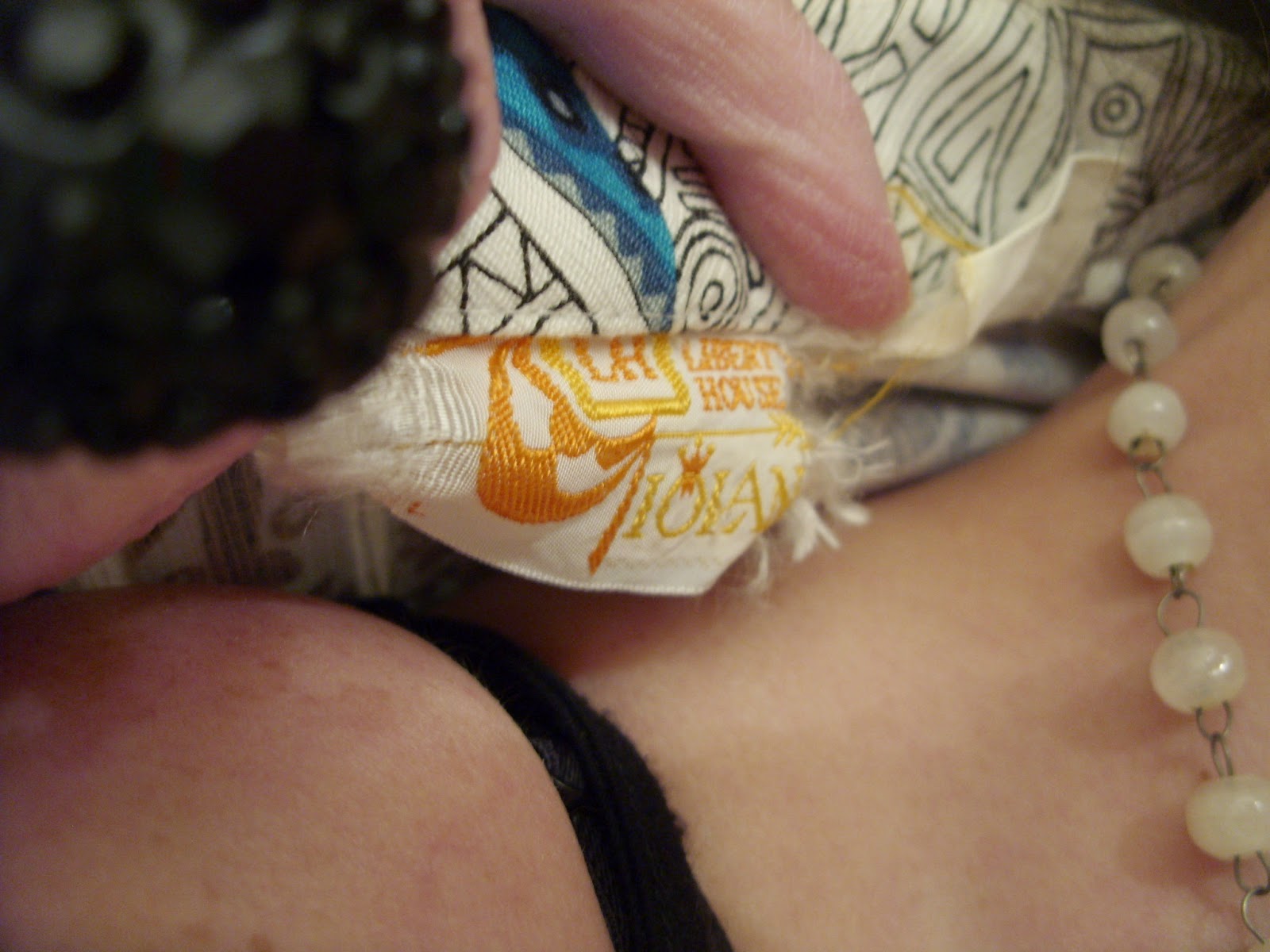 Liberty House was a department store in Hawaii that eventually branched out to the Western United States before going bankrupt. Mr. ETB thinks remembers it from the few years he lived in Hawaii in the late 60's (before moving to Germany)but he may well be remembering it from Washington State where he ended up when they moved back to the US. Poor guy, his dad was an Army officer, and they lived Everywhere. People ask where he's from, and he just shrugs. 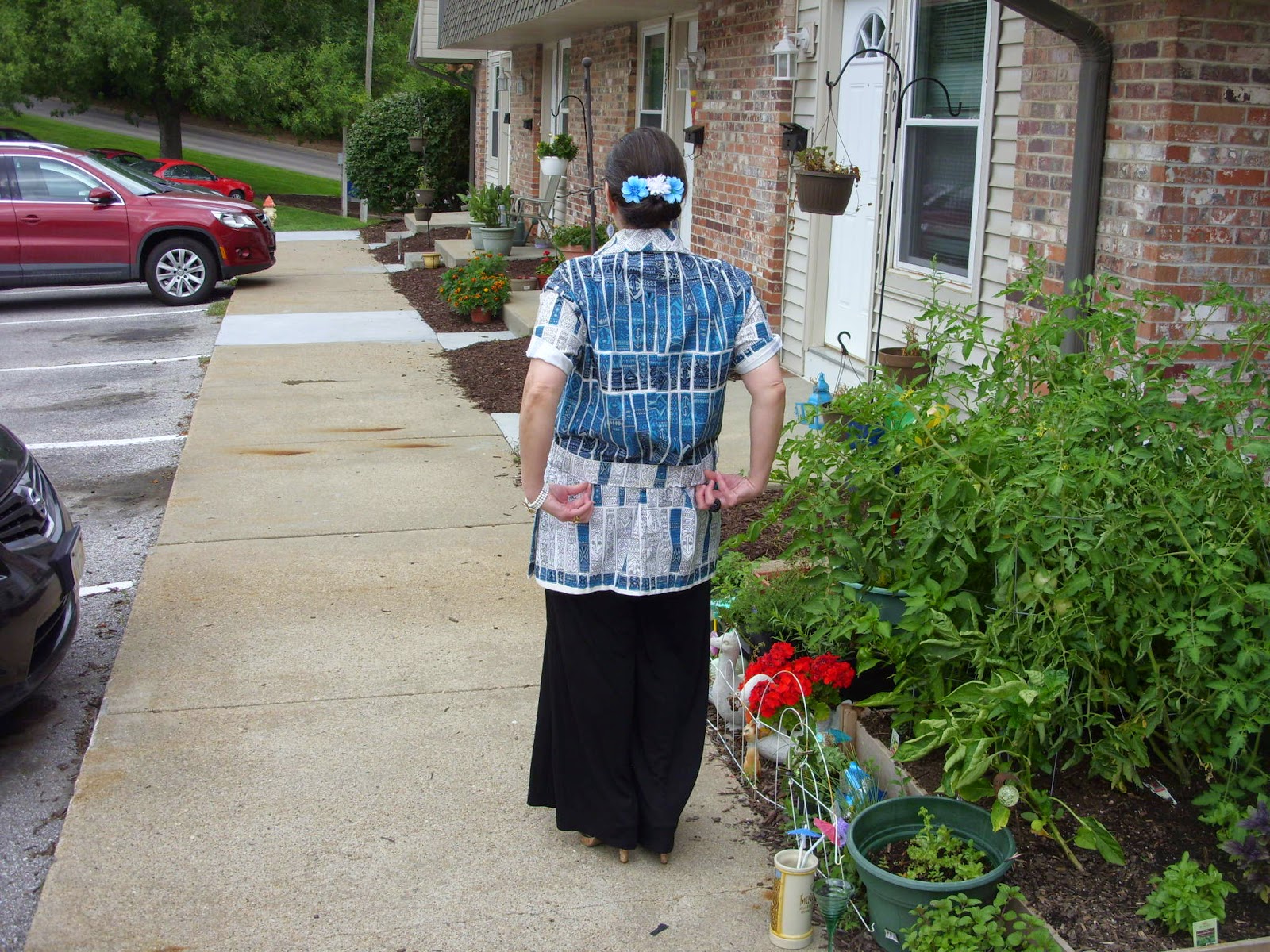 Me? I open my mouth and everyone knows exactly where I'm from, even though I haven't been there in 25 years. I used to mind it, and it really used to irritate me to be halfway around the world and have someone ask if I'm related to Al Capone. I swear to god, if I had a dollar for every time someone (in halting English) made a mime of a gun with their finger and said, "Chicago! Al Capone. Bang, Bang!"  I suppose the Hawaiians are fed up with people reducing their culture to floral shirts, Don Ho, and Spam Musabi, so I won't complain too loudly as I pose in a Hawaiian shirt and drink from a Tiki glass. Any Hawaiians that want to make a mobster joke, feel free to have at it. 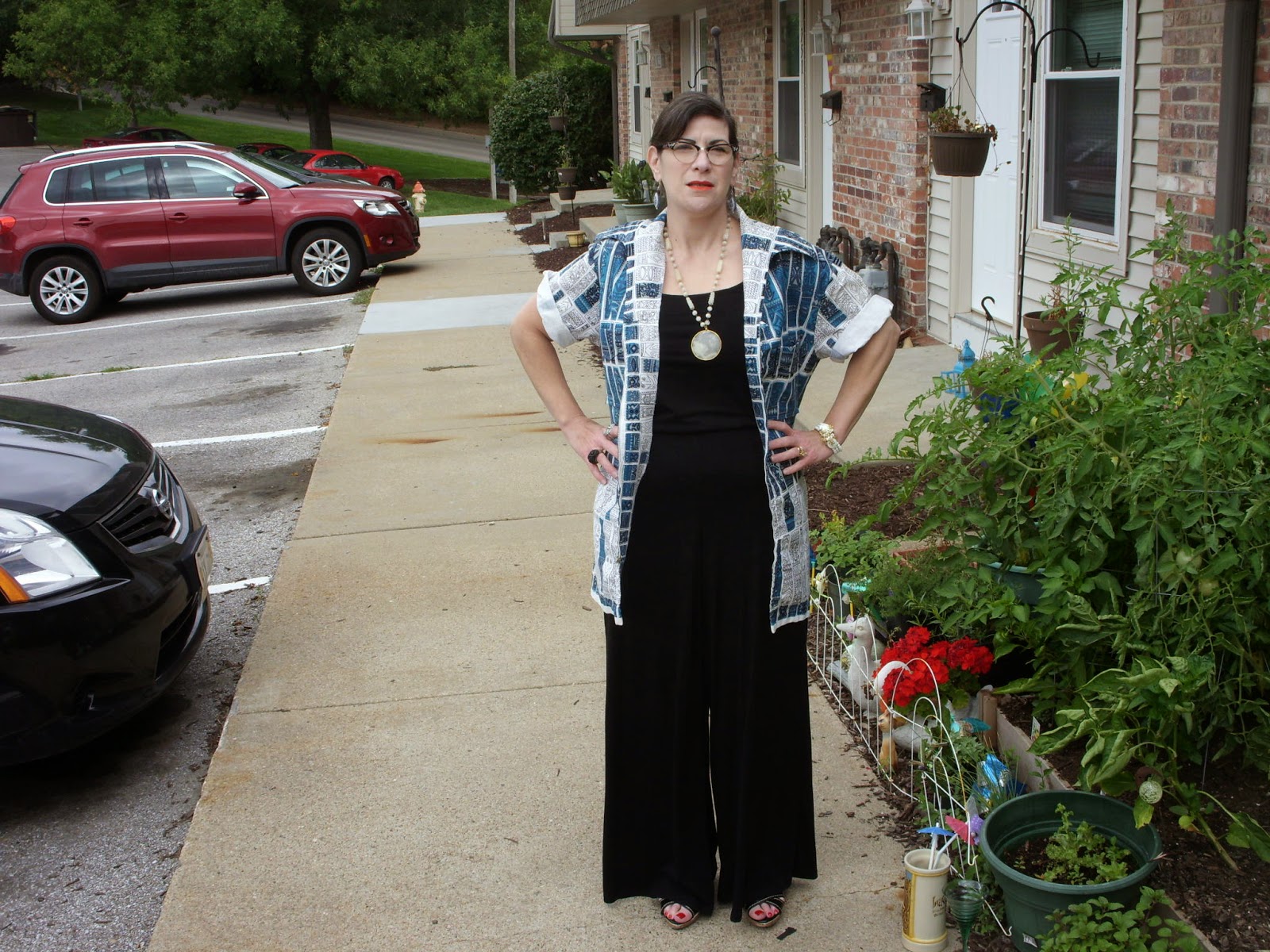 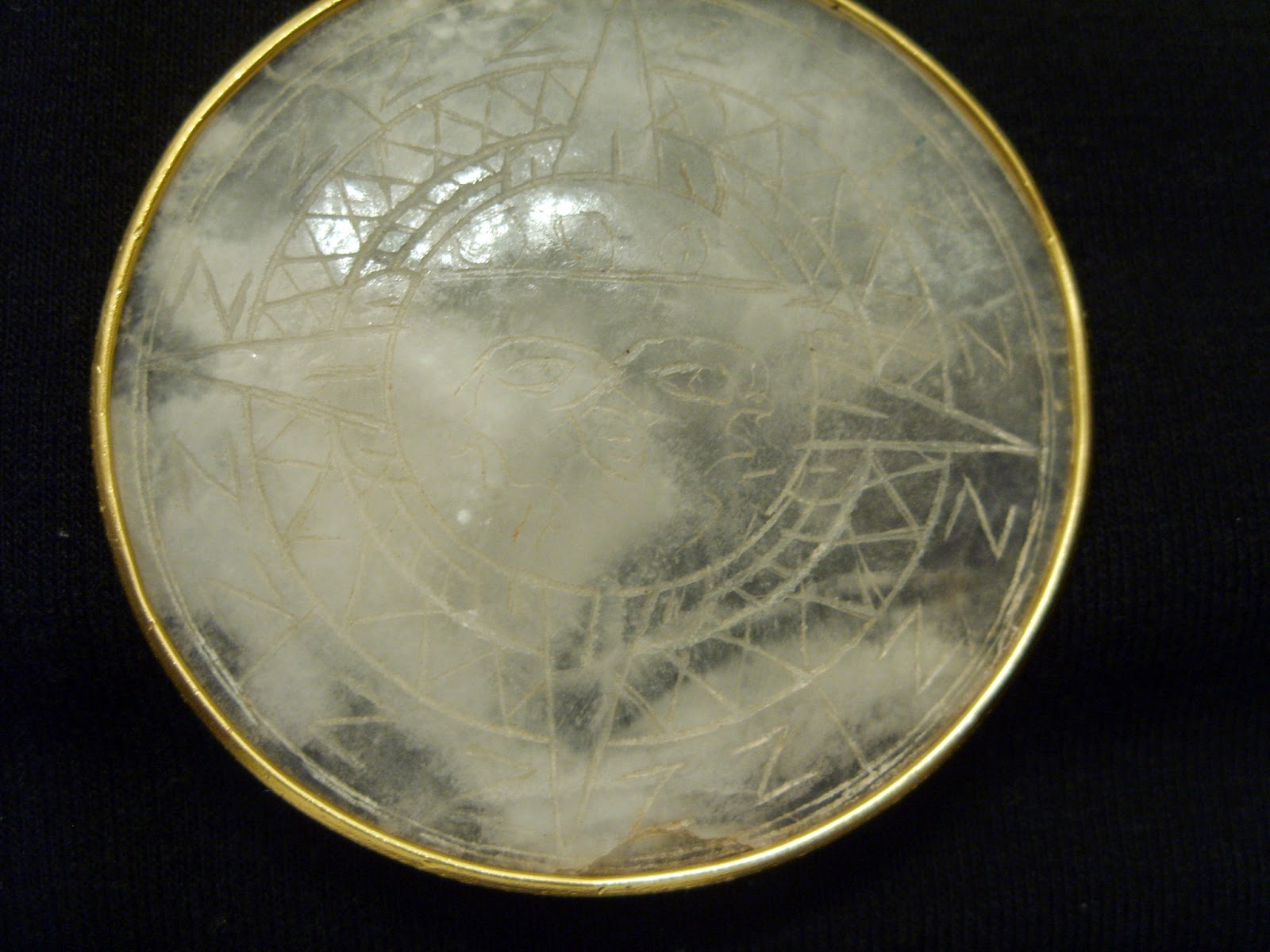 I stopped at the new .99 cent Goodwill in the Old Market to see what it was like. Everything is .99 cents, and it is really just a couple small rooms. I thought this artwork on the wall was striking. 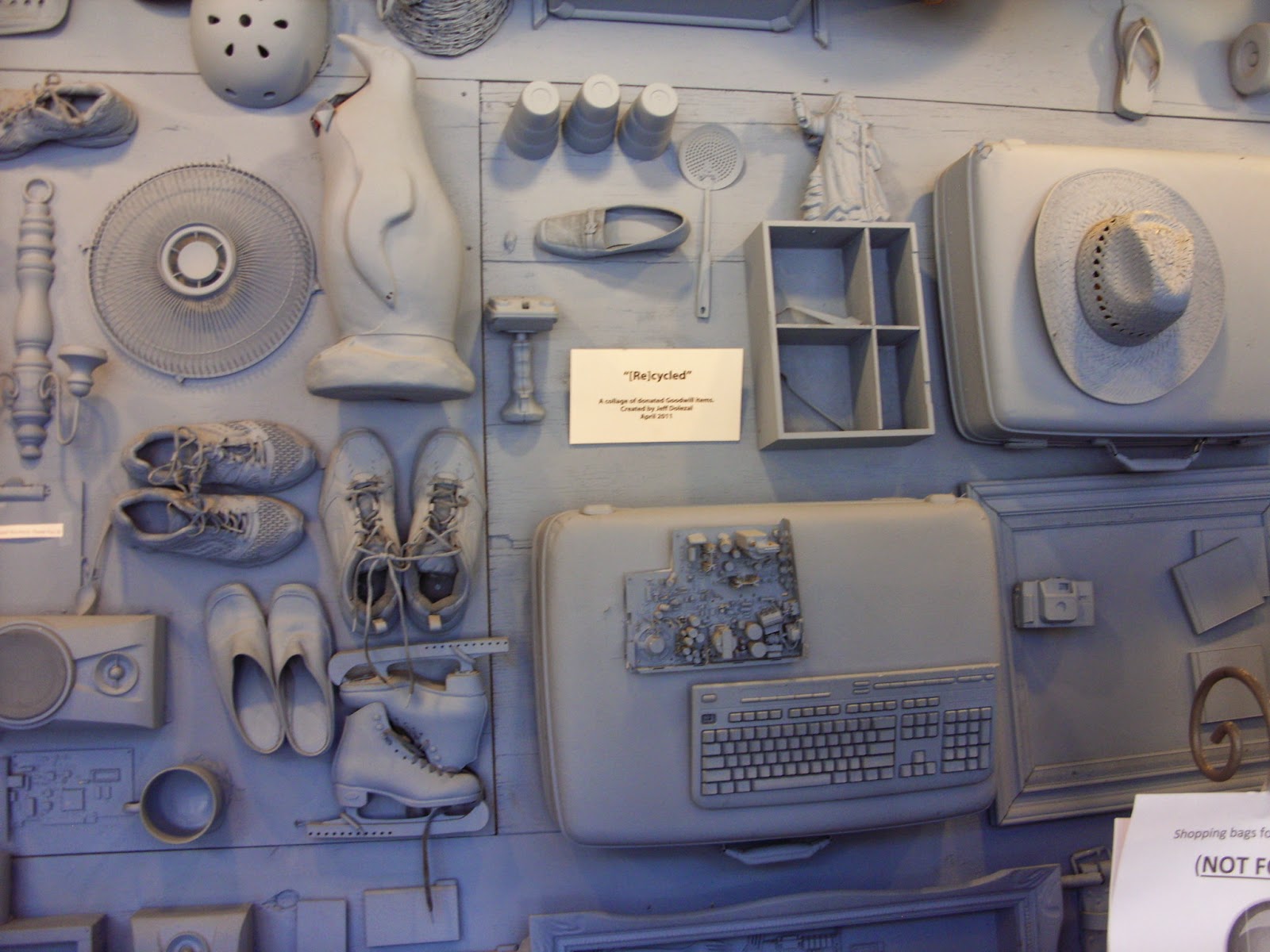 I enjoyed my visit very much. I found 2 brass magazine stands, a 1930's velvet bias cut gown that looked well worn, but in decent shape (still had the belt, and hardware), and a pair of knickers (no, not undies, knickerbockers, that button at the knee). Danny got a hideous, black and white striped suit. The pants are a bit short, so we're going to cut them into shorts rendering the entire thing absurd. That's my boy! 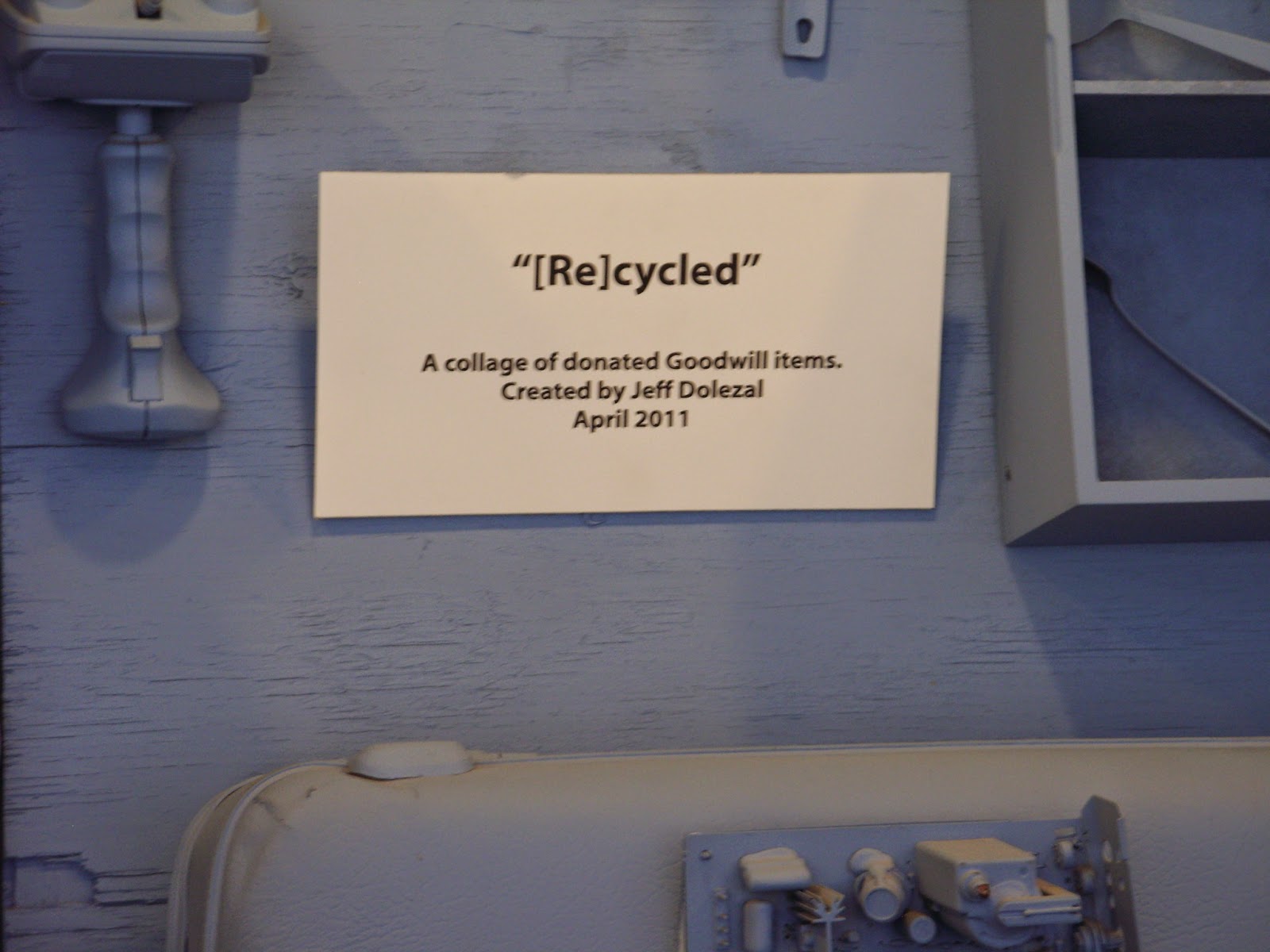 I doubt it is that good, all the time but I sure was lucky there today. It is a bit of a pain to get to, and park so I don't imagine I'll put it on my regular stop schedule, but who knows?

Now I want to see a photo of Danny in his striped suit, do you think he will oblige? When Mr ETB gets asked where he is from he should say "Everywhere" and then some! Hawaiian print gear does the rounds for ever so it will be a keeper. Pretend drinking in the morning, what will the neighbours think? Flip the bird.

Those young neighbours of yours are going to fascinated by you with a drink in your hand at 9 in the morning!
Of COUSE Danny will want a 1960s Hawaiian barkcloth zip-front belted shirt/jacket when he's a bit bigger - he's his Mama's boy, he knows what's good for him in the world of style.
A 1930s velvet dress? Ooh, that's a great find, show us! And the suit for Danny, show us that too, please. xxxx

Don't know if Danny will pose in the suit, and I'd be lucky to get an arm much less my body in the dress, but as soon as the laundry is dealt with, I'll try to get some photos on the dress form.