Iowa Before the Caucus 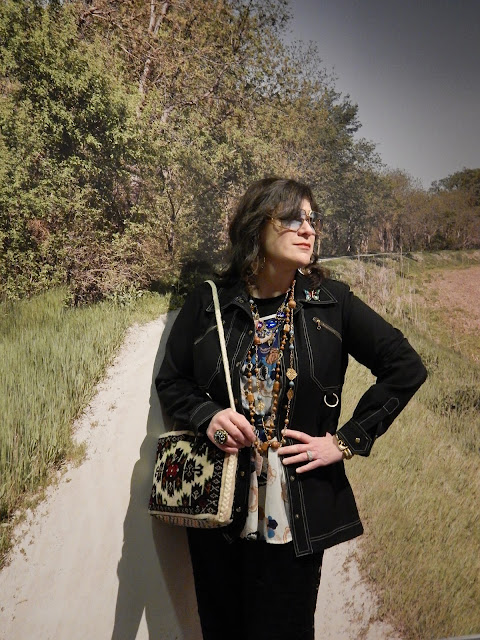 After Monday night, all of Iowa will be breathing a sigh of relief as the presidential candidates vacate the state, turning their attention to New Hampshire and beyond. I live just across the bridge in Nebraska, and I'm getting sick of all the television ads too-at least we're spared the telephone calls.
As you've probably guessed by the green grass, I'm not really standing in a field in Iowa, but in front of a nifty backdrop at the Union Pacific Railroad Museum.

I had to laugh at the Guardian coverage of the Iowa campaign. The photo-essay that's supposed to tell you all about Iowa and corn has a farmer (out)standing in his field...but it is a field of soyabeans, not corn. I know there's corn in Britain-perhaps not as much as the US, but there is corn. I think the problem is more a generation of editors that grew up with Birdseye, and have no idea what it looks like growing. Could have been an American editor that messed it up. Damn kids wouldn't know a vegetable if they had it stuck up their ass. *Ahem*.  Anyway, to help out the youngsters-corn is the tall stalky stuff with the tassels at the top, and funny offshoots at the sides. Soyabeans grow on leafy bush-like green plants closer to the ground. "The corn is as high as an elephant's eye, and it looks like its climbing clear up to the sky..." Soyabeans...well, no one writes songs featuring them (that I'm aware of). 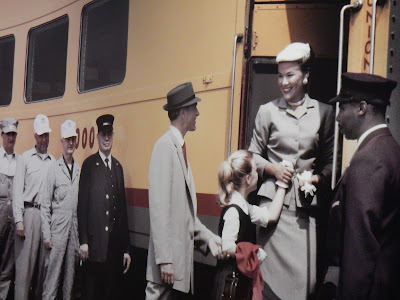 I enjoy this museum, and they frequently update the exhibits keeping each visit interesting. The museum is staffed by former Union Pacific employees that can answer just about any question a railroad buff can throw at them. 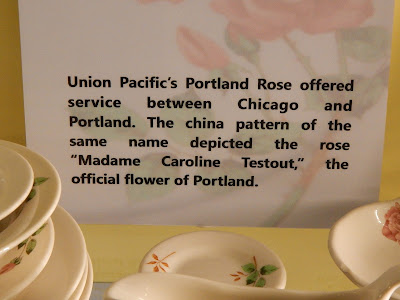 There's a great display of the various china and silver services used on the trains over the years. 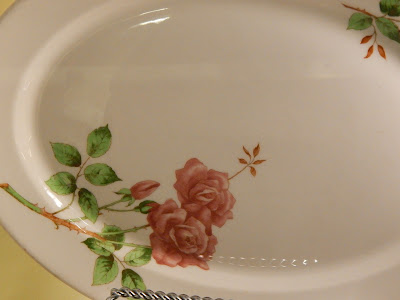 You can listen to the dispatch centre too. 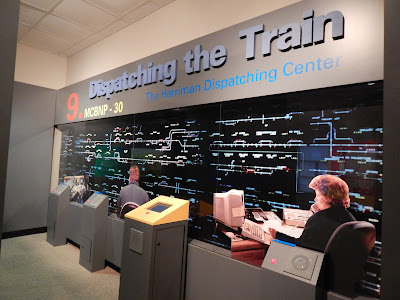 When the movie, Union Pacific was made, locals turned out for the premier in period dress. Some of the costumes are on display in the museum. I've never seen the movie, which seems wrong. I'll have to track down a copy. 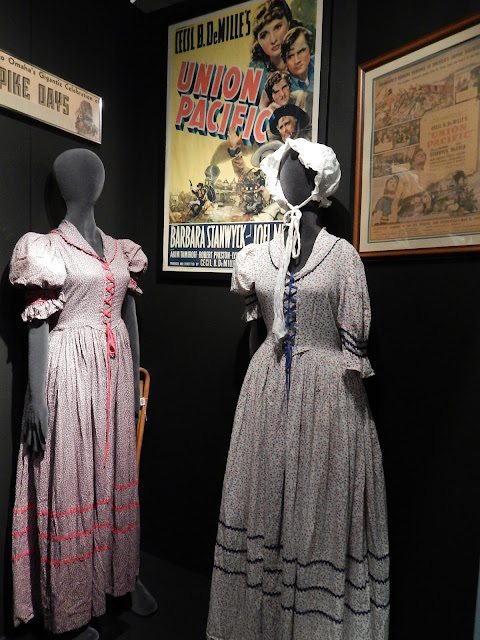 So that was our visit to the museum. We're expecting a horrible storm on Monday evening (foot of snow, 50 mph winds-that sort of horrible) and there's some concern that people might not want to turn out to caucus, particularly in rural areas. I think perhaps the media underestimate Midwesterners, though I did go ahead and cancel some plans I had for Monday and Tuesday. It does sound like it will be bad, taking into account the tendency for the media to exaggerate storm threats. We'll see. It was 56 degrees today. Go figure! 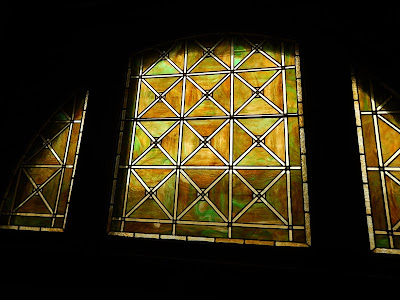 The museum is in the former city library. A volunteer told me an interesting bit of trivia I'd not heard before. During the war, the city had all the original stained glass windows removed for safety, and they were eventually tracked down, and replaced when the building was restored as a museum-except for one that remains missing. I'm sure it will turn up at some yard sale years from now and has been sitting in someone's basement since the war!

Man, I look like I've been hidden away in a basement since the war...well, the Vietnam war anyway. ` 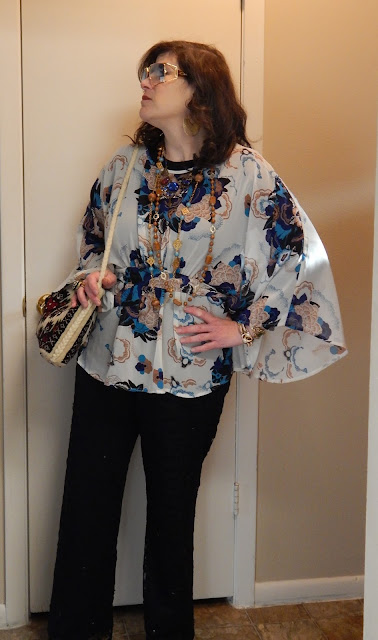 Here's a close-up of the lace trousers. They're lined, and comfortable enough to wear, but the devil to photograph! Lace and beads. 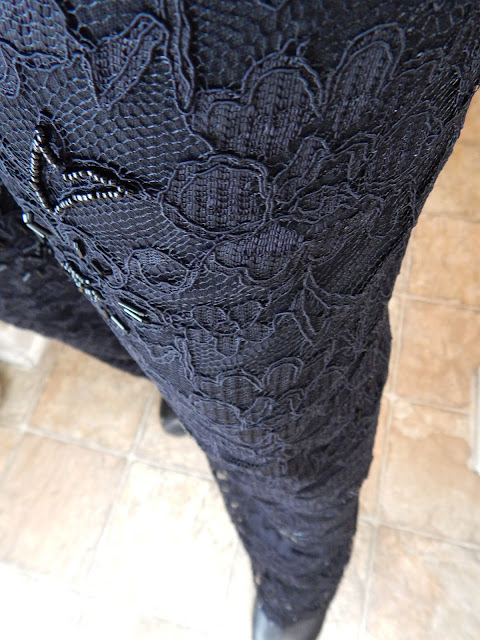 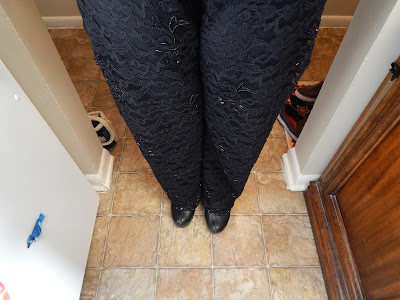 I swear it hadn't dawned on me that a carpetbag probably wasn't the best thing to wear to Iowa right before an election when they are inundated with politicians from all over the country. Danny was sure I did it deliberately (I didn't). 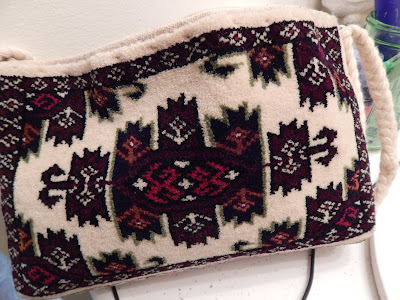 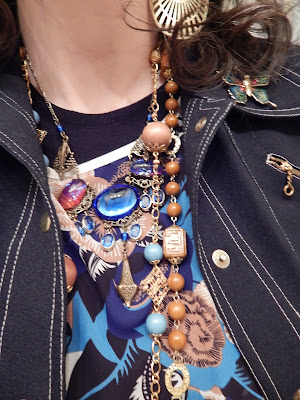 "Yeah?"
Oh look- a glimpse of myself as a sullen teenager. I swear I'm not in a bad mood! 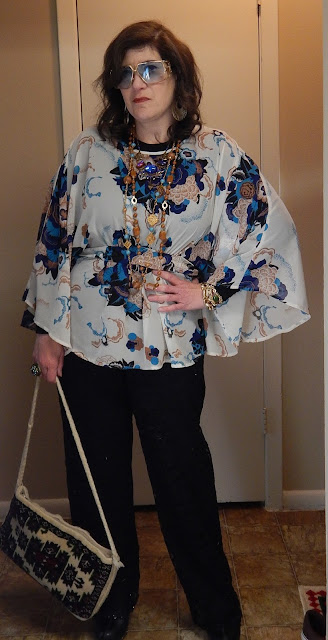 I won't try this pose in a gale-might end up over the rainbow or something. 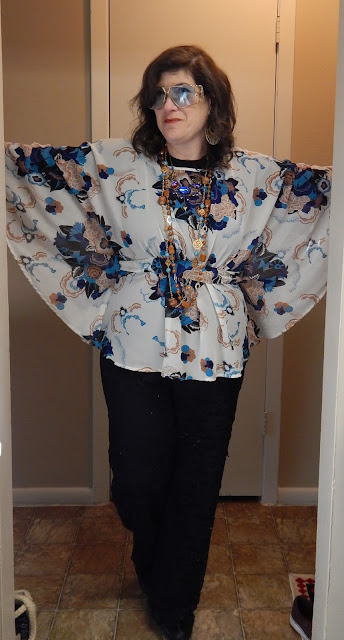 I do love the trousers, but they're not a very good width, so I'll be taking them in. I don't mind wide trousers, but these aren't quite wide enough, or slender enough to be useful. I have another similar pair that are unlined to be worn with interesting leggings beneath-I'll leave those wider. 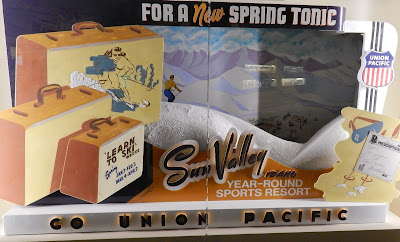 If the forecast is correct, I won't be needing a holiday to play in the snow.

We have a small party planned for Monday evening to watch caucus coverage, play a vintage board game called, "Candidate" and possibly fit in the new X-Files. The storm is expected late in the evening so hopefully we won't lose power. At least if the power does go out, it will be cold enough to store the contents of fridge and freezer outdoors.

Hang-in there Iowa, the end is in sight!

You've recently touched on people and what oddities they collect. I know a gentleman who has assembled an online collection of train movies, including Union Pacific (which is worth viewing for Stanwyck, but annoying for its portrayal of an Old West that was never that clean). My pet of the lot is The Ghost Train (British 1940) which is a enjoyable mix of comedy and melodrama, and provides a glimpse of how the trains and station houses worked in war-time. I think Danny would enjoy it, some of the music-hall humor is suited for young male minds.

The lace pants are unique in my experience. They appear to be extremely snag-able. Can't imagine how difficult that material would be to sew! However, they work with the jacket, the top, the mean teen attitude. Just the thing for a no-holds-barred caucus!

Looking gorgeous in gabardine & pulchritudinous in polyester!
I'm not a big fan of patchouli, but somehow oakmoss seems like it might take away the 'head shop' associations I have with it.
I'd bell those trousers if at all possible, lace conservation!
Riding on a train & eating off of silver & china adorned with Mdm Testout roses, now that is glamour!
Given the current selection of US presidential candidates, all I have to say is "HAVE Y'ALL GONE FUCKING NUTS OVER THERE?!?" I have no desire to ever permanently reside in the US ever again.
I believe I had an entire 3 piece pantsuit from Montgomery Ward's that matched that polyester jacket with the contrast stitching when I was 11 yrs old. My dad had also a similar top stitched polyester "leisure suit" in chocolate brown with which he wore with a brilliant orange paisley cravat & an acid yellow shirt with a huge pointy collar. Patent leather white tasseled loafers finished the look as we cruised about in our golden Ford Brougham LTD with deep umber brocade upholstery. A few cigarette burns from mom's Virginia Slims marred the dash & the shiny brocade seats. Usually a trail of well chewed Copenhagen dribbled down the driver's door from dad's near constant spitting too. You just never mind that pint of Jack Daniel's under the driver's seat, missy. Oh the memories of the 70's & the way things were...
http://calmlycookingcurry.blogspot.com/2016/01/kashmiri-tao-mooj-fried-radish-chutney.html

I love everything and the lace pants are out of this world! I love the caped top, the jacket, the bag, jewellery - the whole caboodle. Extremely stylish and quirky.

You've just made me kick myself reading about your other pair of (unlined) lace pants. I had a pair of cream, pleated chiffon pants and recently donated them as I thought a)I would never wear them - too dressy and I don't really go to dressy places, or very rarely and b) they were see through. Why the heck didn't I think of leggings underneath?

All I can say re your forthcoming election is God help us all if Trump gets in........

Is your carpet bag one of those kilm bags? Very nice and I don't care if it was inappropriate for the outing, you rebel you!! The lacy pants are rather gorgeous, thanks for the close ups of the fabric. Also thanks for the tour of the museum, I do like going on a tour overseas.

Here in Britain corn is any sort of grain, not just sweetcorn/maize, but a field of legumes is still nothing like a field of grain!

It's not known as The Grauniad for nothing...

@Beth
That sounds like a great movie-I'll look for it. I hadn't considered snags-guess I should be careful when wearing them so thank you for the heads-up.

@Bibi
I have a photo of my aunt wearing the same jacket-so it must have been rather mass-produced, and popular at the time. I miss contrast stitching-and piped trim.

@Veronica
I wear a lot of evening wear as daywear, though I'm not sure I ought to be endorsing it as a style-it *does* look bonkers at times. If I cared what people thought of me, it would be something I might look back and wonder about down the line. Thankfully, I don't give a toss!

@Sue
The bag is just a cut-up piece of an old rug that has been folded in half and stitched. It isn't even lined. I suspect it was someone's craft class project at school. I remember doing similar things with indoor/outdoor upholstery fabric.

@Mim
I'm laughing at the comic potential/confusion of a "maize maze."

I saw your comment this morning before seeing the paper, and yes, that's a relief. I'm more frightened by the actions of some Trump supporters than I am of the man himself, but it has been getting seriously ugly here with respect to behaviour. This was just the first primary, and it is a long way until November, but yes, I did sigh in relief when I saw your comment.

I hear so much about the election here in Canada and I can only imagine how much more you hear there daily. It is a bit much. The mistake between corn and soybeans is quite the mistake. Not sure what we are teaching our kids these days!
I do love your outfit! The detailing on your lace trousers is lovely and I really like that top!