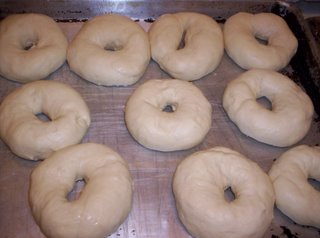 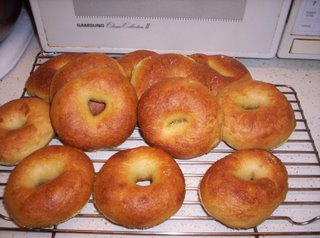 For this recipe, I am again indebted to Floyd at The Fresh Loaf. The recipe can be found HERE. I made a few adjustments and have some observations to share.

I tried the recipe twice, once using regular Gold Medal bread flour, and again using their new Harvest King Flour. I was unable to discern any difference. My husband thinks the Harvest King yielded a slightly denser bagel, though he admits that the difference is so minimal it is hardly worth noting. I’ve tried other bread flours, (though I can’t swear by the unlabeled “bread flour” they sell at Ideal Grocery in Lincoln, NE as they package it in a clear plastic bag. For all I know, it may well have been Gold Medal. I’ve used Pillsbury, and Hodgson Mill-all acceptable flours, but in our area, the Gold Medal is the most economical for the quality. I’ve wanted to try the King Arthur flour but it is just prohibitively expensive for my budget.

Even with a Kitchen Aid Professional 350 watt stand mixer, I had a difficult time getting all the flour called for incorporated into the dough. By the time I had to hit the reset button three times (we call it the “core meltdown button”) I knew I had maxed the amount of flour it would take. It might have been the humidity in the room that particular day, or some small variation in the flour-but those things are to be expected with bread baking. I worked the dough until it was stiff and let it go a cup short of the total, and it was fine. It does make me think of moving up to a commercial mixer though (our circuits can handle it) which if I stop to think about it is sort of terrifying that I’m doing enough baking to justify the investment in a commercial mixer.

I was unable to locate malt syrup so I used honey instead. That did tend to sweeten the dough slightly and I noticed that the bagels did better the second time with more salt, though that may be a personal preference.

I made mine smaller (still quite large by anyone's standards) and yeilded 18.

They held up well, and provided a couple hours of teething entertainment for my toddler son. My husband, who is used to East Coast bagels, and is not the sort of person inclined to flattery, claims they are the best bagels he’s ever eaten. Certainly better than anything available around here.
Posted by Goody at 7:32 PM
Newer Post Older Post Home