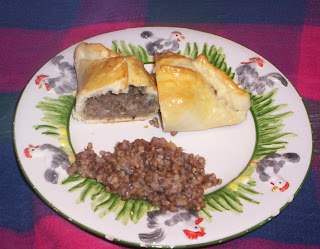 I don’t like knishes. The idea of filling soft dough with potatoes seems like overkill to me. Somehow, pierogi seem less pointless on that score.

For the last few weeks, my little boy has been saying “knishes!” instead of “kisses.” I figured I’d better try my hand at the doughy appetisers before he lost interest in finding out what they are. I formulated a couple of fillings that are (I think) a bit more interesting than the traditional mashed potato mush. I also devised a crust that is less cakey and more like a would-be calzone.

The recipe for the kasha (buckwheat groats) filling can easily be adapted to a side dish with bow-tie pasta. The ground lamb filling could also be pressed into balls and sautéed to be served with cous cous or pasta. Both are terribly versatile.

2 cups flour
2 teaspoons baking powder
1 teaspoon salt
¼ cup margarine
¾ cup water (added a small bit at a time)
2 eggs (one beaten into the water, and the other used as a glaze)

In a large bowl, mix the dry ingredients. Cut in the margarine (or use a food processor-works great). Slowly, add the egg and water mixture until the dough comes together into a ball. Knead until smooth (about a minute).

Cover and chill for half an hour.

For the kasha filling:

Over medium heat, melt two tablespoons of the margarine in a deep frying pan and cook the onions and mushrooms until soft. In a small bowl, beat the eggs. Rinse and drain the kasha and add to the eggs, stirring to coat evenly. Add remaining butter to pan and push the onions and mushrooms to one side. Add the kasha and stir quickly until dry. Stir in the boiling broth and bring everything back to a boil. Reduce heat, cover and simmer for 10-15 minutes or until the water has been absorbed. Either toss with cooked bow-tie pasta for a side-dish, or set aside to use as filling for the knish.
*Some people swear by a tin of cream of mushroom soup or potato soup mixed-in at the end. If you do this, omit the bouillon as there will be adequate salt and flavouring in the soup.

For the Ground Lamb filling:

Sautee the onions in olive oil until soft. Add the lamb and spices and cook until browned. Drain off the oil and in a large bowl, mix with the mashed potatoes. Use as filling for knish. If using ground lamb as a meat-ball type meal, omit the potato and serve over noodles tossed with oil or herbed cous cous. I’ve also had great luck adding a bit of sweet wine to the mixture.

Roll into small rounds or squares* and place a small mound of filling in the centre. Pinch closed in the manner that looks best to you (traditional knishes are flat-ish squares, though honestly, no one will care if you make triangles or circular puffs. Just make certain to pinch them tightly closed and make a slit for steam to escape. Place them on a lightly oiled tray and then brush with a beaten egg and bake for 35-40 minutes depending on your oven. The knishes should be golden in colour.
* This can also be made as two large knishes that may be sliced into servings.