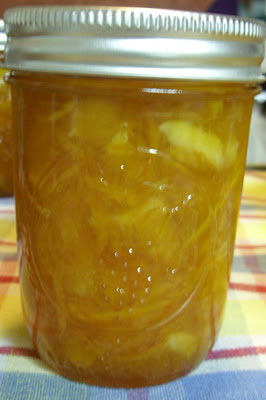 I ended up going half brown sugar, half granulated for this batch-the results were excellent. For the batch I'm making tomorrow, I have orange flower water, which hopefully will introduce a bit of bite into the marmalade. This particular batch wasn't overly sweet, which may possibly be the use of homemade brown sugar. I tend to go a bit heavy on the full-flavour molasses which may account for the slightly deeper taste. Hard to know.

As for the set (because I know everyone is waiting to find out what happened) I used a thermometer and when it arrived at 220 degrees F. where all the experts say it should set, I dug out my spoons and began testing for a set-you already know what happened. So I let it go to 225 degrees F. It was still quite runny, but knowing how quickly it can turn inedibly hard, I went ahead and bottled it up at that point. It did firm up a bit, and it mounds on the spoon, but it is much softer than what I'd associate with marmalade. My family considers this a great improvement though, so who am I to argue? At least we won't be destroying spoons prying it from jars.


I followed the technique in the Ball Blue Book, but the recipe is my own doing. The amounts-figure this will make far more than your canner can accommodate, and have extra jars ready for the fridge-I ended up with close to eight pints, which would have been great if I'd thought to use pint jars, but I had half pint jars, and now I have a fridge full of marmalade. You could have worse things in the fridge-and it will keep for months. Nah, it won't last that long.

2 cups finely chopped orange peel
(it took about an hour to do all the prep work, which isn't bad. I listened to As It Happens, which I always expect to be about Canada, but it always ends up being a portrait of how stupid Americans are. Go figure. Tonight it was something about Utah having an official state gun).

Bring everything but the sugar to a boil in a large stockpot. Reduce heat and simmer 5 minutes. Cover, remove from heat and let stand 12-18 hours in a cool place (I used the kitchen counter).

Next day, bring pot to a boil (uncovered) and cook rapidly until peel is soft. You might see some scum rise to the surface, so go ahead and skin that off-it is not the same skimming you do at the end of canning. When the peels are soft (be sure they are, as they will not soften any more after adding the sugar) measure how much fruit, peel and liquid you have. Add 1 cup sugar for each cup of liquid. I ended up with 10 cups of liquid, so I used 5 cups brown sugar, and 5 cups white. You can of course, adjust this to your tastes. Add the fruit back into the pot and add the sugar, stirring constantly to dissolve and to prevent sticking. Boil it rapidly until it reaches between 220-225 degrees F. or sets according to any gel tests you like (the saucer in the freezer thing never worked for me). When you're satisfied with it, pack it into hot, sterilised jars leaving 1/4 inch headspace. Remove air bubbles with a small spatula and wipe the threads clean. Seal with a heated lid and adjust bands. process 10 minutes in a water bath canner, then let cool 5 minutes, in the turned-off canner before removing to cool. In 12-24 hours, test seals. Makes more marmalade than you ever thought possible.
Posted by Goody at 6:49 PM
Labels: British, Canning, Marmalade and Jams, Orange, Oranges