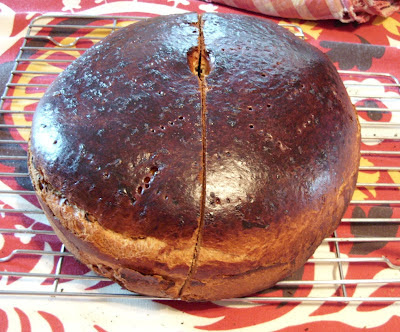 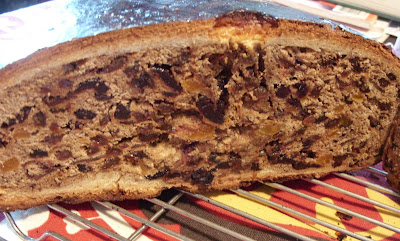 Could have baked a hair longer, but the moisture is mostly down to the fruit. I wouldn't call it underbaked by any means.

This is my day for imposing historical oddities on the family-I also baked a Scotch Black Bun. No, not the fruitcake encased in pastry that people think of as a Scotch bun today-I made the 17th Century version, yeast risen with modern yeast rather than a barm.

I don't think I've ever baked anything that weighed ten pounds!

Yes, it is a large thing, the Black Bun. I need to let it cool before slicing it open (please God, let the centre have baked through) to reveal the bread within the bread. I don't know what the point of the yeast was, as it barely rose, weighted down with all that fruit. I looked around on the internet, and all the examples were the fruitcake sort, so I didn't have much help envisioning the final product. I looked at Elizabeth David's take in her bread book, and while mine is close to what she describes, I can't help but think it should have been lighter-or not, people in the 17th Century had different expectations for the density of bread. I swapped out different dried fruit as sultanas and currants are quite expensive now, but kept the proportions the same. I have to admit, encasing a bread in a second layer of dough brings to mind a turducken, albeit one made of rich bread and fruit. Now I regret not making the centre of yet another small bun-next time.

I'll update the post later with photos. I suspect this will be a recipe that needs a bit of tweaking and adjusting.

Posted by Goody at 8:41 AM
Labels: Bread, Bread With Stuff In It, Breads, Dried Fruit, Historical, Scotland