Good Morning, it is Another Lovely Day in The Village 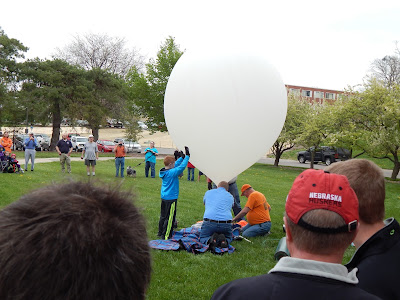 Ah no, never mind, that's just a weather balloon. I'm sure I was the only person there wanting to yell, "I'm not a number I am a free man!"

Today was the annual Great Plains Weather Symposium in Lincoln. They did all the usual stuff for kids, and the emergency management people putting the fear of (acts of) god into anyone that wandered near enough their exhibits. 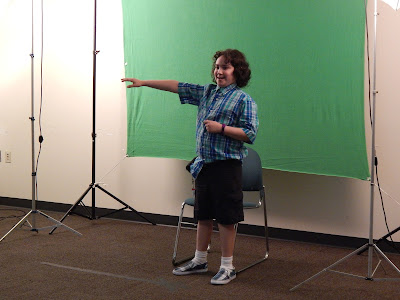 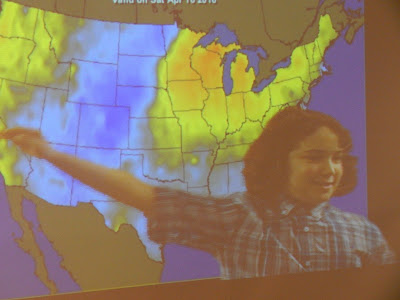 Danny tried his hand at being a television meteorologist. 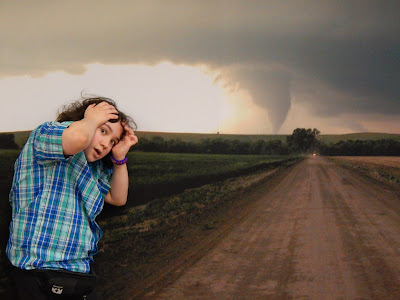 We took the yearly tornado photo in front of the backdrop. 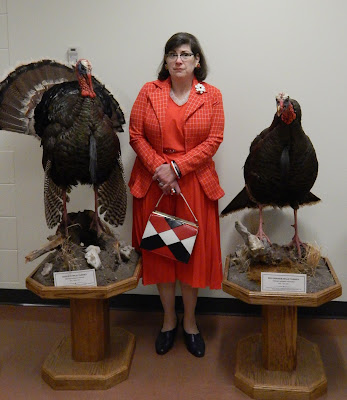 I found these two turkeys downstairs.
We've had all sorts of turkey problems in Eastern Nebraska lately with them crashing through windows and being general menaces. 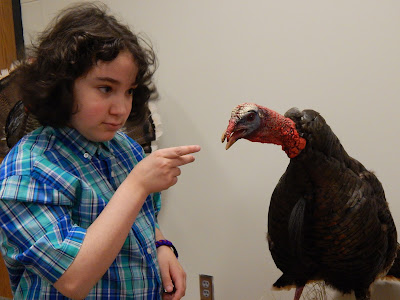 Danny gave them a good talking to, and they promised to be better behaved in the future. 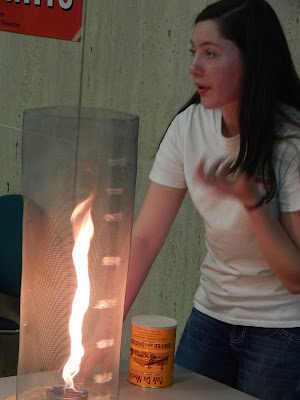 There were students demonstrating "Firenadoes" which is exactly what it sounds like. In a wildfire, they can be a serious problem for firefighters. We did not however see any, "Sharknadoes."

We stopped at the Lincoln Salvation Army thrift store on the way home for a peek around. I'm currently really horribly sick, (no exaggeration) and not at all in the mood to look around. I didn't even bother with the clothes, but I did find yet another Collins-esque bucket bag (that makes 4) and five bakelte bangles (and one clamper style) for $1.99 each. I have return to Lincoln next week, so hopefully I'll be in better shape for shopping. I was certain it was allergies (coughing, sneezing, etc.) until the sore throat and fever came in. A quick look at the local health department website when I got home confirmed my fear that the flu is peaking in Nebraska at the moment. It was strange-typically you see it in the winter, not spring. Obviously if I had suspected flu I wouldn't have gone out in public spreading it, but it was only as the day wore on that it got worse (and worse, and worse). 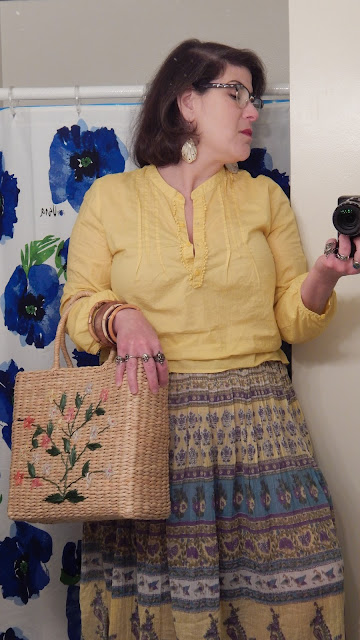 Fashion-wise, it was a rather uninspired week. The weather's still flaky, and so am I! This Indian skirt cost a buck at Goodwill, and I think the top was about the same. The bag is something I've had for years but didn't have use of for a very long time as Danny would store his building blocks in it when he was very small. Eventually, he moved on to Lego, and I got my bag back.


At some point last week (Tuesday, I think) I wore a vintage Hawaiian shirt with an 80's linen jacket from Nordstrom. Then, I promptly spilled coffee on the jacket so it is off to the dry cleaner as I don't want to make the damage worse. I really shouldn't have nice things-I just ruin them.

Yes, my Chucks say, "Left and Right" at the toes. I've had them since I was a teenager. They get strange looks (and comments) when I wear them out...but what part of my wardrobe doesn't? 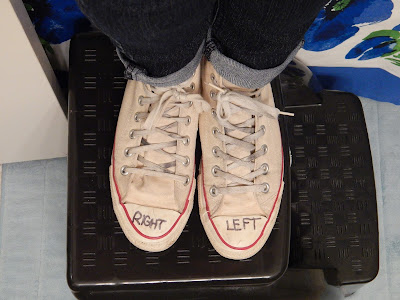 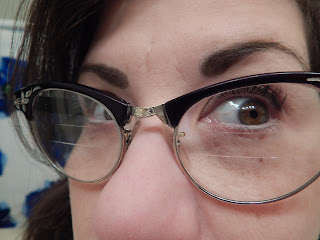 I wore a linen and wool blend Italian made jacket and trousers to visit the wildlife refuge in Iowa. It is a nicely made thing, but it irritates me that the buttons all started falling off with the first wear. This was NWT when I bought it at Goodwill, and from the tags it looks like someone spent a good chunk of change on it. For that kind of money, I'd like the buttons sewn on properly. Otherwise, it was perfectly comfortable, if a bit easy to wrinkle. 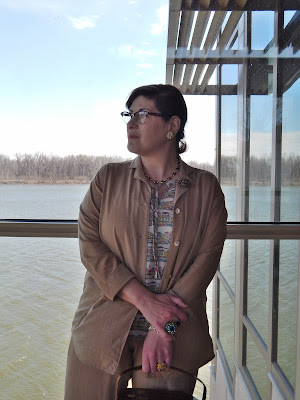 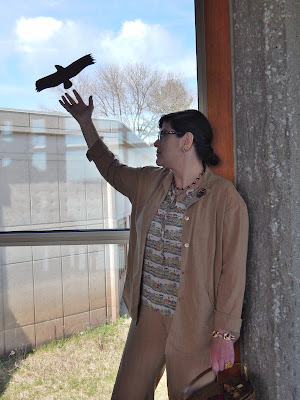 They put the bird shapes on the windows because the birds are too stupid to avoid flying into them. They only help so much. I've had grackles slamming against my patio window all week, and we have stickers on them as well. So far, none of them hit hard enough to break the glass (that happened a few times on the farm). 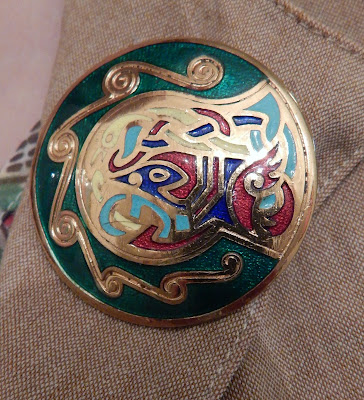 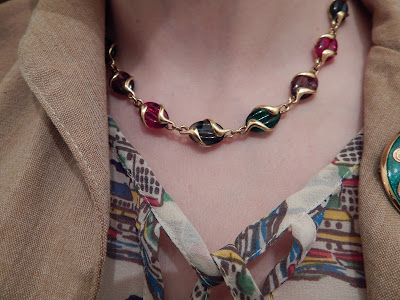 I wish I could remember what fragrances I wore, but the whole week was a blur (Probably because I was already getting sick). Still, it wasn't a bad week overall, and I did manage to accomplish a number of things, even if it didn't feel like it at the time.

We're heading into the end of the semester (we go year-round, so there isn't a proper summer off) and I need to put together next year's syllabus before the end of June (it isn't due until July, but I'm not a last minute sort of person). For a few weeks that's all I think about, and I complain endlessly. Still, once that is out of the way I can relax and enjoy the summer classes without a deadline hanging over my head. I've vowed to get it done early this year-but I'm sure I'll still be fine-tuning it into June. I wonder how long I can put off teaching Milton? 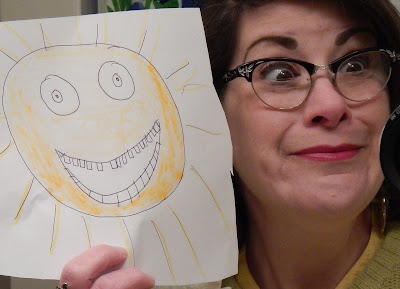 Okay, I'm off to cough up a hairball find some cough suppressant . Danny drew a picture of the sun modeled on my sunny disposition.
I'll just keep on coughing up pieces of my lungs bringing the sunshine.

Turkeys don't listen, even if a boy as smart & cute as Danny lectures them. That's why they're turkeys. Those wild turkeys are pests in my native Sonoma too, often attacking their own reflection in expensive car paint jobs. and glass patio doors with disastrous results.
Sorry to here you've got the flu. What weird time for flu to be making the rounds. We rarely have flu outbreaks here in Nepal but when we do it's dealy for many Nepalis. Nepalis don't have much resistance to flu viruses. Typhoid & hookworms yes, flu no.

Your left & right Chucks remind me of a preppy wannabe that had port & starboard printed on her canvas deck shoes.

Oh, boo to flu! It is horrible. Swine flu has been doing the rounds again here - like regular flu but with a side order of the worst, erm, digestive repercussions you can think of. I hope you've avoided that one. No wonder you weren't up to browsing in the shops.

It's not a weather balloon, it's deffo a captive Rover.

I did two years of a (never-completed) MPhil on Milton. What are you covering? I even visited the old git's memorial in Westminster Abbey. (I have a soft spot for Milton; heb gets neglected nowadays because his work is so challenging, but the man was a genius.)

Well despite being ill you look great! Lovely outfits. The Indian skirt and top go so well together, I love blue and yellow. Loved the pant suit with the matching accessories (brooch and necklace) and wow Goody you were wearing jeans! I think that's the first time I've seen you in jeans and you look fab!

Yes, deadlines are not good things to have hanging about so good on you for getting on with it! I tend to put off until the last minute things I don't like/want to do.

Those turkeys were fearsome looking things and as for grackles I have no idea what they look like so I'm off to google them.

Tell Danny he most definitely has a career as a weatherman - he so looks the part!

@Vix
I think what's so frightening about turkeys is that they have no fear, whatsoever-and they're huge. I've been a vegetarian since 1982, so I only vaguely remember what it tastes like, but my memory was of a very dry chicken (that could have been mum's cooking though).

@Bibi
Oh, Port and Starboard...that's goooood (makes mental note). When the swine flu was around last it was in the spring, but yeah, our weather and viruses are all messed-up. I think I lucked-out with a very mild case-the fever is mostly gone. Everyone is panicking over Zika now.

@Mim
I'm not sure what I want to do with Milton (because I don't want to do it!). I had Paradise Lost forced on me as a Western Civ. requirement at school, and that was the last I thought about Milton. Honestly, I'm a better science teacher than I am literature and humanities. We still have Petrarch to get through before June because I saved him for last! Maybe I'll die of flu and get out of it.

Don't tell anyone...but they're "Jeggings" (leggings that look like jeans). Shhhh, let's keep it a secret!

Gadzooks!! I'd jump out of my skin if wild turkeys came crashing through the windows!!!! Phew!!

Back to the clothes....love that vintage Naturalizer purse!! So glad the hipster, man-bun guy didn't snag it first!

Looove that Hawaiian shirt....did it get anything spilled on it?

"Prisoner" references make me so happy.

@Thrifty Parka
Turkeys are nothing nice. We had a flock that lived on our county road years ago that terrorised anyone driving by. My father-in-law nearly took out the lot of them flying around the corner although I'd just warned him to, "Look out for the turkeys". He slammed the brakes just in time as he was starting to respond, "What turkeys...?" Strangely, no one ever believed me when I'd tell them to watch out for turkeys. I guess people expect deer on roads but can't get their heads around wild turkeys.

The shirt was OK-the jacket is probably ruined though.

@Propagatrix
I'm glad. It was my very favourite show, and I forced Danny to watch all the episodes so we could bond properly as parent and child.

Please take the flu very seriously, Goody. Whatever is making the rounds here in the Midwest appears to be collaborating with allergies and a bacterial infection. Dehydration becomes an issue, as does exhaustion from a lack of sleep.

Quite right about taking those turkeys seriously, as well! We've got a flock that conducts field maneuvers at a rural highway intersection. Unfortunately, their flight pattern takes them almost exactly hood-high... Peacocks are worse nuisances, however. Blasted birds scream loudly enough to shatter glass.

I'd ditch Paradise Lost and do some of the shorter stuff - something like the masque Comus, and comparing/contrasting L'Allegro and Il Penseroso. They're really lovely shorter poems, still showing how Milton works with classical allusion and Christian imagery. To my mind, they sum up Milton as well as anything: the extreme dichotomy between the poet and the Puritan. If you need a longer poem, why not Samson Agonistes instead?

Honestly, Paradise Lost is too much for most literature undergrads, if Danny can avoid it, don't push him to to it. I'm not sure 12 heavy-duty books of poetry someone doesn't want to read teaches them anything other than that they never want to read it again. Better to wait till the time is right. If you *do* do Paradise Lost, can you cherry-pick sequences to compare and contrast rather than doing the whole thing.

People always misunderstand Milton's Satan. ALWAYS. The point is, he's self-deluding as well as a liar, but people take him at face value. Which I guess is Milton's point.

People also misunderstand Blake's comment that 'Milton was of the Devil's party without knowing it'; 'The devil's party' was, in Blake's time, a term for antinomian Christians. Basically, Blake's saying Milton was as religiously extreme as himself.

@Beth
I'm heeding your advice. Every time I think I'm starting to feel better, the coughing and body aches come back to remind me I'm not. There comes a point where you just need to crawl back into bed.

@Mim
Danny said to tell you, "Thanks for the save, and I love you!"
I wasn't going to make him do Paradise Lost read aloud, but I'll let you take the credit for rescuing him from it *wink*.