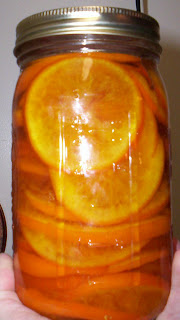 I made a few changes in this recipe (the original called for lemon and grapefruit slices and I did straight orange instead) but still ended up with a large jar of booze-soaked orange slices-perfect for garnishing Old Fashioneds. I'll post the original recipe including the other citrus in the event you can locate decent lemons and grapefruit to make it worth while (I could not).

This was a rather quick project-about two hours start to finish, though I suggest not waiting until late afternoon (as I did) when you'll suddenly realise it is time to make dinner and your large pot is full of simmering oranges-oops!

Sterilised jars with appropriate lids (the recipe didn't insist on sterilising but, you know me)

Wash the fruit well and slice thin. Place in a large pot and cover with boiling water. Boil gently (not vigorously) for twenty minutes. Drain the fruit and reserve them.

While fruit is cooking, make syrup by mixing the water, sugar and lemon juice in a pan and bringing slowly to a boil. Cook about five-seven minutes or until it just barely coats a spoon.

In two separate pots, place the oranges in one and the lemons and grapefruit in another. Add a few drops of yellow food colouring to the lemon/grapefruit pot and a few drops or orange to the oranges. Cover each with syrup and simmer slowly for 30 minutes, adding more syrup if needed. Let the slices cool and slice the larger ones in half. Combine them and then pack them in jars with syrup and bourbon. Seal the jars and chill the fruit in the fridge.

Make yourself a whiskey sour and go relax. OK, have a couple.
Posted by Goody at 5:25 PM
Labels: Booze, Gourmet When It Was Still Good