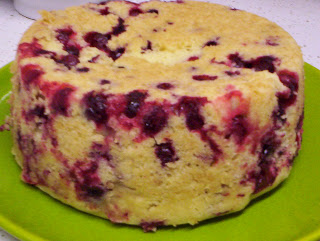 Well, given what I went through to make this little delight, I suppose I shouldn't worry too much that it is a wee bit lopsided. Nothing a bit of hard sauce won't disguise when served. Just an aside, hard sauce is really good on pretzels. You don't need to know how I arrived at that conclusion, it just is-but don't take my word for it, try it yourself.

You really don't want to hear about racks that didn't fit pots, smells of burning metal, overflowing water and all that stuff-do you? I didn't think so. Let's just say that it never hurts to be able to improvise-which is exactly what I did, setting the mould atop two large cookie cutters as a base and steaming it in my large enameled pot. I'm the queen of secondary plans. Anyway, here's how you make the pudding-it will probably go easier for you if you have a steamer made for such things, but if you don't, you really can rig one up with a base in a large pot. Just remember to keep checking if it needs additional water because the smell of pots boiling dry isn't so nice.

-A strong slug of brandy (for you, not the recipe)

Begin boiling a kettle of water. Rig up a steamer where the pudding dish can be raised up from the bottom of the pot and a lid still fits over.

Cream the butter and sugar until light and fluffy. Beat in the eggs one at a time.

Sift the flour with the baking powder and salt. Add, alternating with the milk. Stir in the cranberries and nuts. Pour into mould, cover top tightly with foil, and set in steamer. Add water slowly until halfway up the side. Replace lid. Steam for 1 1/2-2 hours (mine took two) until done. Remove from pot and let stand ten minutes before unmoulding carefully. The pudding can be made ahead and then re-heated, wrapped tightly in foil in a 325 degree oven for forty-five minutes. Serve with hard sauce.

Cream the butter and sugar together. Stir in the brandy and salt. Chill well before serving. Makes two cups.
Posted by Goody at 5:05 PM
Labels: Cranberries, Holiday Fare, Pudding