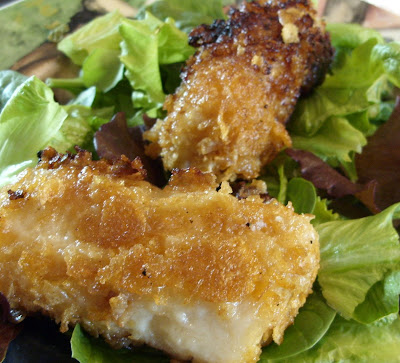 Oooh, look at the beautiful salad greens from my garden.

From the moment I heard the words, "banana fritter", I was determined to make them. Before I got the chance, bananas skyrocketed in price, and as someone that could barely cope with the thought of paying .29 cents a pound, .89 cents per pound was out of the question. Danny never really liked them anyway, so I moved on to other fruit. Once in a while I'd get some that were slightly past their prime at a bargain, but those were destined for banana bread. Last weekend, I scored a large bunch for .25 cents. While I did make the obligatory loaf, I thought it time to attempt the fritters.

These are so easy, it is silly. Toss your bananas in some sort of juice to keep them from darkening (I used key lime because I have two pints of the stuff at the moment-the limes were also on sale for .50 cents a bag). Roll them in crushed corn flakes, and fry them in butter. That's it. I served them as a salad course.

Predictably, Danny didn't like them (as he doesn't care for bananas) and Mr. ETB did, as he likes anything that has been breaded and fried in butter.

I do think these would work better with less ripe bananas, or even plantains. Still, I'm glad I finally had the opportunity to make them-I lose sleep over this sort of thing.
Posted by Goody at 4:55 PM
Labels: Americana, Bananas, Cereal, Depression Era Cooking, Starters