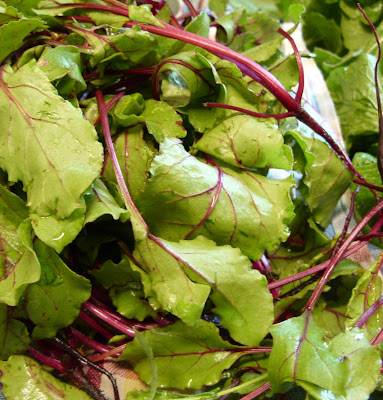 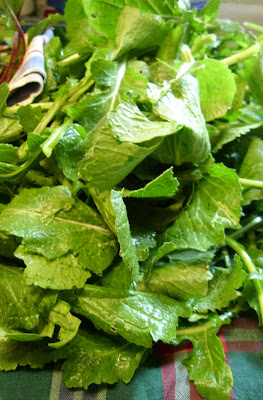 I'm going to be looking at greens quite a bit in the next week or so, as I'm harvesting a bumper crop. While greens may be blanched and frozen (I'm doing that as well) they are best prepared fresh, in my case from the garden. Greens don't have very long shelf life, so only purchase (or pick) what you can use in a day or so. 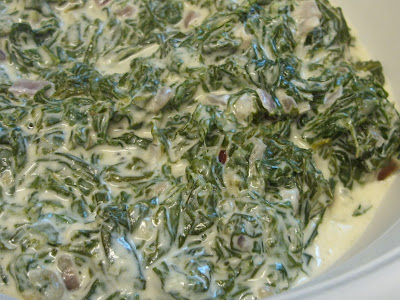 Some people feel that turnip greens are too assertive to be enjoyed without another green to mellow them. I don't believe this, nor do I subscribe to the idea that turnip greens must first be blanched or they will be bitter. That said, I did mix them with other greens, and I did blanch them first, but bear in mind they won't be inedible if you skip it. Just don't try to eat turnip greens raw as they have prickly leaves (that falls off in cooking) and they tend to be rather tough.

Blanch the greens in boiling water. Return to a boil, then drain. When cool, chop greens and squeeze to remove as much moisture as you can. Meanwhile, in the same pot (why dirty another?) melt the butter and cook the onion in it until soft (about 2 minutes). Add the green and the broth. Cover, leaving a small vent and cook about 20 minutes or until greens are tender. Remove lid, increase heat and cook off remaining liquid. Reduce heat to low, stir in the flour and cook, stirring until well mixed-about 1 minute. Slowly stir in the milk and cream until well mixed. Cover, leaving a small vent and over the lowest heat, cook until thickened-about 2 minutes. Serve warm.
Posted by Goody at 2:56 PM
Labels: Beet Greens, From My Garden, Sauces, Turnip Greens