It Only Took Forty Years 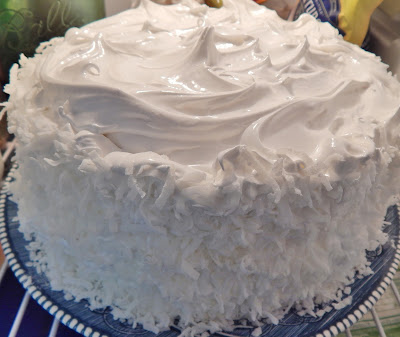 My first big baking, "Fail" came in home Economics class when I ruined a batch of Seven Minute Frosting. Over the years, I've tried at least a couple dozen times and either it never reached spreading consistency, or it formed large lumps of solid boiled sugar within the frosting. It bothered me. I'm rather good in the kitchen, and I can make everything from fondant to buttercream without difficulty-so why on earth couldn't I manage a stupid Seven Minute Frosting?   Needless to say, today was a special day because what you see there peeking out from the coconut is a perfect seven minute frosting-no shards of hard candy enclosed.

I had to rig-up a double boiler using the basket of my food mill and a metal mixing bowl, but it did the trick, though the "seven minutes" was closer to fifteen. No matter, I made Mr. ETB the coconut cake with a lemon filling as an anniversary present (he adores coconut and lemon) and Danny marked the date in the cookbook with a note beside the recipe reading, "Mother didn't ruin it." No, no she did not.

If I thought my (then) elderly Home Economics teacher were still alive I'd track her down and send a photo. I remember her as rather severe and intimidating. After demonstrating numerous times that I could neither sew nor cook, she suggested I consider taking "Shop", advice which I followed. I was much better with rulers and saws than measuring cups and yardsticks.

Place all ingredients except vanilla in the top of a double boiler. Beat 1 minute with an electric mixer or rotary beater. Place over but not touching boiling water and beat constantly until frosting forms stiff peaks (about 7 minutes or in my case, fifteen). Remove from water, scrape into a clean mixing bowl and beat in vanilla extract. Beat until frosting has a spreading consistency-about 2 minutes. This makes enough to frost a 2 layer cake or about 24 small cupcakes (not the mammoth ones you see today). 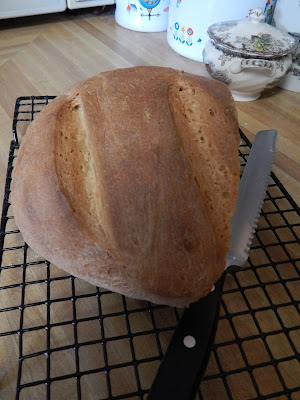 I baked a bread as well since the oven was already hot and I was going to be home all day. Danny made an interesting lima bean and tomato stew for supper that went well with a crusty bread. He's still making dinner every Friday and staying within a budget. The stew was incredibly cheap, so he gets to keep the difference (quite an incentive to be thrifty).

Around the time I was flunking Home EC, I started collecting the "Skulls". At one point I had more than a dozen, but these are all that remain. These aren't true Momento Mori" pieces (which I love but cannot afford) but they became a sort of trademark style of mine for many years, often worn on both hands. It was funny as I wasn't terribly tough looking, and they seemed so out of place with Laura Ashley dresses. I'd completely forgotten them until Danny mentioned something, and I went looking through my jewelry chest for them. 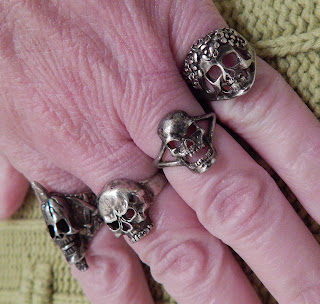 I was pleased they still fit, given all the swelling in my hands. As I've aged, my hands have become bonier and my fingers though swollen, seem to have less fat on them (of all the places I could stand to lose weight, the Universe sees fit to take it from my shoulders and fingers. I mean, WTF?). 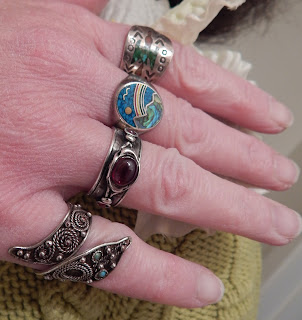 On my other hand are two rings I had as a teenager (centre two) and two that belonged to my mother. It was like being reunited with old friends, and though it has been years since I've worn this many rings at once, it felt absolutely right-at least until it was time to start kneading dough and washing up. I have a nice little ring holder in the powder room, but it wasn't made to accommodate this much metal.

As a collector of vintage I sometimes overlook items I purchased new, and have had in my possession long enough to become, "Vintage." I used to object to the 80's being called vintage-now the 90's are. In the 90's I remember being pleased that slip dresses were back in fashion as I'd saved the white one  from the late 70's I had to have after Debbie Harry wore one on the cover of Parallel Lines. Now, they're back as a 90's revival (though I've gotta say, wearing them over a poloneck is stooooooopid. In fact, it is so stupid it requires the "oooooooo" spelling).

I'm going to make an effort to dig out some of my older items I take for granted to feature on the blog. Eventually, someone will turn to Google images looking for a picture of the white poloneck with tiny red hearts printed on it that they bought in 1978, and I want to be able to help. I've been selective about what I've kept, and for various reasons they are important to me (though in the case of the poloneck, probably not important to the history of 20th Century fashion). It will be nice to give them some time out of storage, even if I wouldn't ever consider wearing them again.

Did you have any trademark looks you've abandoned over the years?

Have you ever successfully made seven-minute frosting?

Hallelujah!
What gorgeous coconut & lemon cake with 7 minute frosting!!!!
Skulls are kewl. I guess those candy Dias del Muerte skulls are hip now.
I've had so many signature fashion fails I don't even want to acknowledge them. For a girl with a 49 inch bust black turtlenecks, 50's fashion & minimizer bras are a gawdsend!

I wear lots of rings and always have because as a teen I didn't like my fingers which are crooked, now I'm not so bothered but am so used to wearing rings I feel naked without them! My fingers have got fat to the point I now wear one of my old rings on my little finger because it's the only one it still fits on, the others I keep but they no longer fit. Bah.

I have a few items of clothing from the 80's & 90's kept because of the good memories attached. I'm way too fat to actually fit any of them these days though!

In my late teens and early twenties, I loved fishnets over colored tights, worn under black denim cutoffs or a short skirt. Now this combination is back in style on the Berkeley campus, and I smile every time I see it.

Wow, that cake looks impressive. I've never made 7 minute frosting or indeed any other frosting. We didn't have Home Economics in school, ever. In primary school, we learned to sew, knit and crochet, though. That is: the girls did, while the boys did boy-things, whatever they were. I was hopeless at it. By the time the other girls were crocheting, I will still working on my sewing project ... I'm impressed by your skull rings. Not only they still fit you, you still have them. I didn't keep any of my jewellery (the little I had) or clothing from the 70s and 80s. I wore a lot of black in the 80s, which I guess was my signature style then. xxx

I have never made 7-minute frosting, but then frosting isn't really a thing over here. There's icing, and that's about it. Buttercream's probably the closest we come to frosting, as that stays soft.

I would never have worn my slips over a poloneck. My slip dresses were worn with a g-string and a pair of shoes and NOTHING ELSE. (Yes, I am amazed my mother let me leave the house like that. And that I never froze to death.) I suppose my trademark look would have been my over-the-knee boots - years after leaving uni, I found out people referred to me as 'boots' because of them. I generally wore them with black leggings and black T-shirt. I still have the boots, though I suspect my calves are too fat for them now.

I look forward to seeing what pieces you've kept - I bet you've got some amazing pieces in your collection.

Great skull rings! They're both beautiful and tough at the same time and remind me of the heavy metal bands of the early 80s.
I have a pair of earrings from the early 90s that I bought at the record store my ex then-boyfriend (now ex husband) worked at. It kind of cracks me up that they're now "vintage" because how can it be if I bought them? "Vintage" brings up thoughts of before I was born...which was actually a long time ago. But my big, old earrings are a trademark of mine now and eventually the grandkids will fight over who inherits them.
That frosting recipe looks interesting. Does it taste good?

Nope - never had a trademark look and I've never made 7 minute frosting.

Now, I've made buttercream of various flavours and that might be the nearest thing. I like the sound of coconut and lemon cake. I've made a rich almond cake this weekend, which I love. It's from a small book of teatime recipes of the type you find in gift shops attached to National Heritage properties, but I find the quantities make for a very small cake. That's ok because it will be me eating this one alone as OH doesn't like it that much! If I was to make it for the family I'd have to double the ingredients.

I think the nearest thing to a trademark look I might have at the moment is 'trousers and tunic' (according to my daughter) and 'colourful' according to a colleague at the charity shop! I've kept nothing from the 60s,70s, 80s or 90s, clotheswise. Although, in an ancient suitcase up in the loft there may be a sailor suit - white and green striped maxi skirt with a short sleeved white, trimmed with green and white stripes outfit, I bought in 1972 for a wedding. I remember getting it down some years ago and marvelling at the tiny little waist I once had. I can't remember if I put it back or sent it to the charity shop - must have a root round for it soon...

Agreed on the minimiser bras and 50's styles.

@Miss Magpie
The teen years are filled with obsessing over body parts no one else notices-thank goodness those years are over.

@Propagatrix
It IS strange (and amusing) to see teenagers stealing your style.

@Vix
I'm sure they speak of you admiringly (and wish you'd pay another visit).
7 Minute frosting is practically marshmallow fluff. It is extremely light, or at least lighter than buttercream.

@Ann
Black is a good signature look-it goes with everything.

@Mim
Yes! Slips need to be worn like Kate Moss or not at all. Good for you. Over-the-knee-boots are the best. You could be remembered for worse things.

The frosting is sweet enough to make your head hurt but very light-it would work well on fairy cakes.

@Bobbi
I love the idea of grandkids fighting over costume earrings-I can only hope for the same someday.

The frosting is nice in small quantities as it is quite sweet. It reminds me of marshmallow fluff. It is easy to stick coconut to.

@Veronica
We always end up with more cake than we need so it either gets given away or frozen-but it is just us three.

I very much like your tunic and trousers look-and boots. I don't have the legs for it (but I don't walk 9 miles at a go either! You are incredible.).

Never mind the seven-minute frosting -- the dark beastie lurking in my kitchen cabinet is the lard pie crust under my lemon meringue! An ongoing challenge since 4-H when I was 10!