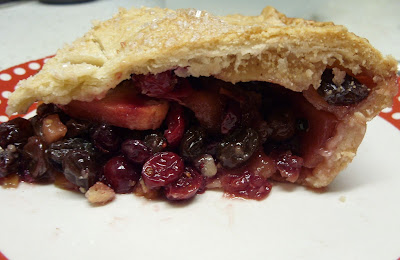 This might be the best pie I've ever baked. Oh, I know I said that when I made the blueberry rhubarb-but I'm fickle and now I love this one instead.

I tried to get the best parts of an apple pie, and mincemeat without going to the trouble of making mincemeat. The texture is much lighter than mincemeat, but the flavour is there. I used only a tablespoon of brandy to the pie, but it was enough to give the overall filling some depth against the brightness of the tart apples and cranberries. I didn't plan to make this pie, rather I used up odds and ends in the pantry and what I pulled from the oven was the best pie I've ever baked. Even the crust was unusually flaky.

Sift together flour and salt. Cut in butter. Toss in water a tablespoon at a time until you can gather dough together lightly. Roll out. Unlike many pie crusts, this does not require pre-chilling, but I often do set the bottom in the fridge as I make the filling. It certainly won't hurt it any to do so.

Preheat oven to 425 degrees F. Line a 9 inch pie plate with the bottom crust. Make the filling by tossing together the apples, dried fruit, cranberries and brandy. In another bowl, combine the sugar, flour and spices. Mix well. Toss with the fruit. Pour into pie crust and dot with the pieces of butter. Seal with the top crust and then brush it generously with the cream. Sprinkle it with a mixture of fine and coarse sugar for a sparkling, crunchy topping. Pierce the top to vent in several places, or make a hole in the centre. Bake about 40 minutes, or until it looks done. It will bubble over, so remember to place the dish atop a baking sheet-unless you enjoy cleaning the oven in which case, you should come over and clean mine.

This pie is good at room temperature, or slightly warmed, but hell, I'd devour it ice cold from the fridge it is so good. Mmmm, pie.
Posted by Goody at 3:05 PM
Labels: Apples, Cranberries, Fall Fruit, Fruit pies, Mincemeat, Pastry, Pie, Pie Crust, Seasonal Treats