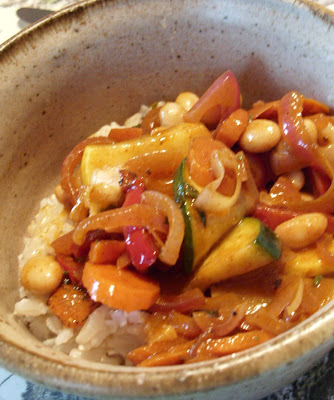 I'm pretty sure there is a more straightforward way to make this rather than cooking the vegetables in segments-but I haven't figured it out. I suppose you could roast the vegetables and just pull them from the tray as soon as each is done, but that too seems like a bit of work. I wouldn't bother posting this if the results weren't worth the effort, and I rather think they are. The family agree, so here it is.

You can substitute vegetables if there's something you have and need to use as the exceptional part of this salad is the dressing. I based it on a Todd English recipe from the 90's ( you know, the guy that looks like Jack Kerouac, but less hung over...can you imagine a Jack Kerouac cookbook "You grab a bottle of cheap Tokay and like drops of rain on the Sierra Nevada in spring when the whole world is going whoo-hoo lookit the rain, you pour that cheap Tokay wine into a bowl and whisk slowly like some zen master turning and then everyone breathes and you've poured wine in a bowl. Then, you grab some salt...")*, but with a whole hell of a lot less oil, and much more lemon juice (and additional vinegar). You should save those calories for dessert, not blow them on a salad. Well, a good dessert anyway, I mean if your choice is between Watergate salad and the olive oil, I'd take the oil, but I have a four layer white cake with a strawberry filling and cream cheese frosting for dessert- I like olive oil as much as the next person (or Todd English) but geez, I have cake in the fridge! The original was meant to dress roasted red peppers, but I do find that the unlikely combination of spices works really well with just about anything (I'm eager to give it a try with cauliflower). I also skipped the mixer/food processor to make the dressing and just whisked the oil in slowly to form the emulsion-this was simple enough, though if you have modern appliances and aren't living like it is 1840, go on ahead an use 'em. OK fine, I'm not living like it is 1840, we have electricity that kinda sorta works most of the time and when it doesn't, "Mr Electric" comes out in his truck and fixes the line. That happens more than I care to think about. But yeah, blenders and food processors are great, ain't they?

You don't really come here for the recipes, do you?

4 small carrots, thinly sliced on the diagonal to keep with the zen nature of the dish, but you can dice them if you want to screw with the Universe.
1 yellow courgette (sliced thinly)
1 green courgette (sliced thinly)
2 red bell peppers, sliced thinly in strips
1 large red onion, sliced thinly
1 large clove garlic, smashed and chopped (this is not a pacifist action)
1/2 cup fresh parsley, coarsely chopped(borderline pacifist action depending on the level of coarseness-name calling is prohibited)
1 tablespoon preserved lemon peel, chopped
Pinch of thyme (can be a pacifist action provided the pinch is of a playful nature)
1 tin white beans, rinsed and drained of their lifeblood and happiness bottled up in aluminum prison like some beat/bean/bongo/baby waiting to jump in a salad
Olive oil for cooking-a few tablespoons at most

Heat a heavy pan that will promote browning-I use a cast iron skillet. When it is good and hot, add 1 tablespoon of the oil, and the carrots. Quickly, over high heat, cook until they begin to char. Remove carrots from pan. Add a tiny bit more oil if needed and repeat with red pepper. Remove to same bowl as carrots. You just want them cooked until they car, the vegetables should maintain some semblance of shape. Add more oil sparingly if needed and give the courgettes a toss over high heat-no more than a minute as they will continue to cook when removed to the bowl with the other vegetables. Remove them. Cook the red onion in the same manner. At the last, add the garlic, lemon peel, parsley and thyme. I'd say half a minute for those. When you have everything in a bowl, give it a light toss and begin making the dressing as the vegetables cool. You will add the beans at the very last when mixing in the dressing.

Combine everything except oil and vinegar in a bowl. Slowly, a few drops at a time, whisk in the olive oil. I did not warm mine as the kitchen was already warm, but in winter, it wouldn't hurt. Adjust by adding vinegar at the end to taste. Toss with vegetables and beans.

I served mine over hot brown rice with the salad itself brought to room temperature.
Posted by Goody at 1:15 PM
Labels: Beatniks, Carrots, I Recession Proofed My Family With Ten Pounds of Carrots, Massachusetts, Red Peppers, Salads