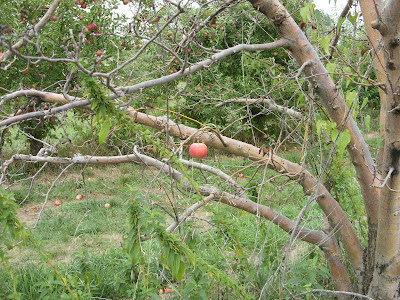 I like the determination of this single, perfect apple on an otherwise dead tree.


Well, I'm back from the Applejack festival in Nebraska City, Nebraska and I have (a few) apples, some Western wear, and tons of photographs. We made a side-trip to Missouri because Danny wanted to see a state he's never visited (he was kinda unimpressed) and managed to clip a corner of Iowa making it a three-state-weekend. What sort of parents would we be if we didn't, yanno?

We came back by way of the "troubled" nuclear power plant. Does anyone else feel that, "troubled" isn't really a good way to describe a reactor that had to be shut down, and subsequently taken over by a private company-and it still isn't operating? I mean, "troubled" makes it sound like we're talking about a celebrity. Lindsay Lohan, is "troubled." A nuclear reactor that had to be shut down is "dangerous." They make it sound like the plant needs a step programme or something.

Because we are the sort of people we are (I mean hell, why pretend, right?) we found a library having a book sale. The books were pretty awful (lots and lots of self-help) but the CD's were half a buck each, and incredible. We bought just about all of them. I did get an opportunity to display my, "nerd cred" when the woman ringing us out couldn't get her calculator to work.
"I have a slide rule!" I offered cheerfully, which got a laugh until she realised I was serious and then she kind of looked at me like I just dropped in from Mars, but I'm used to that.

Danny was able to view his first real parade complete with political candidates, marching bands, and beauty pageant winners. Many, many, beauty queens. I had to explain that to Danny, and he was...what's the word...transfixed? So later, at a science exhibit for children, he finds himself at a table playing with a circuit board beside a beauty queen(she was wearing many yards of pink tulle, a crown and a sash declaring her winner of something). I watched him stare at her, again fascinated (in both senses of the word) and as she was a few years older than he, she seemed aware, and amused by it. Then, she put together one hell of a circuit that not only blew a fan, and lit a light bulb, but hooked up an amplifier to boot. I'd like to see Honey-what's-her-face do that. There's nothing more beautiful than a well-organised circuit board. Nothing.

Other highlights from the trip were the Civil War Museum in Nebraska City (excellent collection for such a small museum, with great staff and plenty of information to accompany the exhibits. Worth the admission which seems steep until you see what they've been able to do with the money).

Ceramics Studio Tour at Jenni Brant Ceramics
I wish I had grabbed some info on her friend who was making lovely animal sculptures-he was very talented, and generous with his time talking to a seven year old (they both were). If anyone knows his name, and if he has a website let me know and I'll post it.

I'm not going to recommend the orchard we went to because it was a rip-off, a zoo, and a great big blight (well, we're talking about apples) on an otherwise lovely weekend. 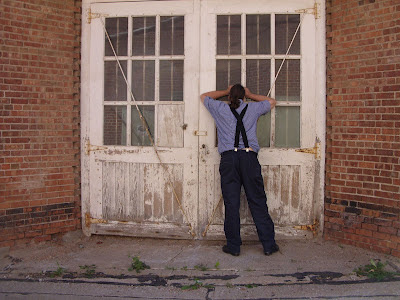 Oh look everybody, it is yet another photograph of Mr. ETB wearing braces, and peering through a window! I thought it would make a good series-my husband wearing braces peering through windows. This makes the second installment. This window was in an alley in Nebraska City, and there was a 1960's Thunderbird inside. He could almost look Amish in that get-up were it not for the ponytail. Maybe he could cut it off and glue it to his chin or something. Amish computer programmer-I'll bet that doesn't come up too often.


Nebraska City is a lovely place with plenty to do when it isn't Applejack Weekend, and I would love to get back and take the Windmill Factory Museum tour.