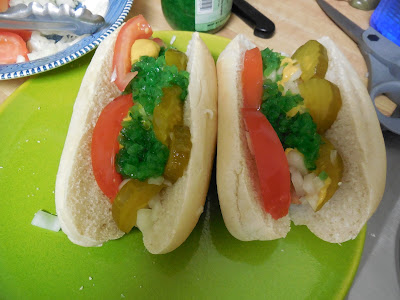 I used vegetarian "not dogs" to make Chicago style hot dogs for dinner. The bright green relish is a local er...delicacy that's mostly sugar and food colouring. I was able to find some in Omaha, which wasn't easy to do. 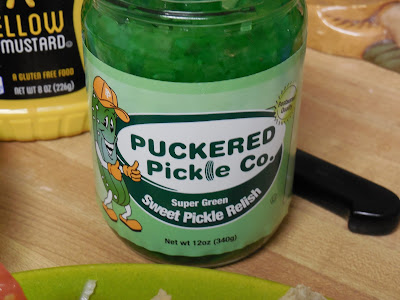 If you're concerned about "Clean Eating" you're going to want to sit the relish out. My dad didn't like carrying it on the truck in summer because he'd have a truck filled with bees that were attracted to the sugar. No matter how carefully he made up the barrels, some would always fall on the floor of the truck, and Chicago bees must be pretty damn smart because they'd be there within minutes of stopping somewhere to make a delivery. Anyway, the stuff is 90% sugar.

Okay, so what goes on a Chicago style hot dog? Well, it really should be a beef hot dog, but obviously we're not doing that. A poppy seed bun is traditional. Chopped white onion, tomato, the green relish, mustard, celery salt, sport peppers (tiny pickled green peppers), dill pickles, and in some neighbourhoods, sauerkraut. How do they taste? Terrible! I know I'm not supposed to admit that, but I never liked them *hangs head in shame*. I didn't eat any of these for dinner, but the boys enjoyed them. If I want a salad, I'll have a salad. If I want sausage, why I'll have a sausage. I never understood the compulsion to combine the two on a steamed bun. A polish sausage is another matter.

This is how I look on two hour's sleep. Is there anything lippy can't do? 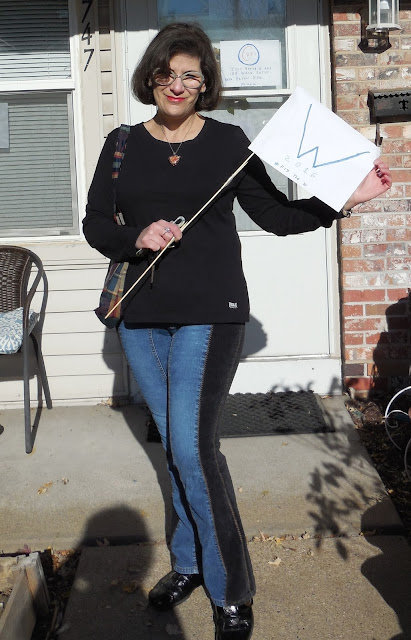 Turns out, this wasn't just squinting in the sun, but the start of a two day migraine compounded by Danny and Mr. ETB both being sick. I swear, I'm still barely able to put words together in complete sentences. I apologise if I sound...not myself.

I prefer Danny's homemade "W" flag, but I went ahead and bought him a proper one (and a tee shirt) on the MLB website so he can proudly wave it next season. I was surprised when my kid declared himself a Cubs fan a while back as I never did anything to encourage it. I thought he was setting himself up for a lifetime of disappointment...shows how much I know! I grew up in a divided household as dad was a Southsider (pronounced, "Sout") and mum a North. My dad always seemed a little uncomfortable at Cubs games and would want to leave before the end of the game to, "Beat the traffic." I can't tell you how many games I had to finish listening to on the radio. I watched the parade and rally this morning in a haze of headache and sleep deprivation, and cried tears of joy anyway. Then, I went back to sleep...for about an hour until "Lawnmower Man" across the street started up. He mows his lawn daily-I think it must be some sort of therapy. In the winter he shovels. As he's quite elderly (about 90) I must give him credit for keeping active. I hope I can do the same at his age.

You might have heard, we're having an election in the United States on Tuesday. 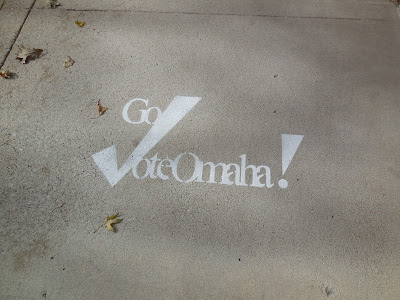 We've been noticing these chalked on sidewalks around the city. I hope people do turn out to vote. This is the first time I've ever had to make arrangements for Danny to stay home when I go to the polls. The threats of voter intimidation, violence, and a generally hostile environment are enough that I don't want to expose a child to it. I could have voted early, but I also feel it is important to stand up to the nativist assholes, and go cast my ballot in person at the polls. I don't expect problems, but I can't be foolish and unprepared for the possibility.

Did you hear about the, "Vote Shaming" phone calls?

Last week, a caller that wouldn't say on who's behalf she was calling started into a lecture about, "Our records show you have missed a few elections. Who you vote for is private, but IF you vote is public record."

I asked which registered voter they were calling for, and she was unable to supply me a name-just my telephone number. Ah. Our number is unlisted, and you do not need to provide a telephone number when registering to vote-so I called her on the bullshit, and hung up. I like to think I've, "Heard it all" when it comes to political campaigning and sleazy tactics, but this was a completely new one.

There's an old tradition in New England of baking a cake to share on Election Day. The Puritans weren't in favour of celebrating holidays like Christmas, so Election Day became a sort of holiday when people would see neighbours. Most recipes trace it to Hartford Connecticut, but I don't know if that is historically accurate, or something invented by a cookbook author. I'm almost certain the Puritans wouldn't be using brandy.

The recipe I have seems suspiciously luxurious for the times. I have no idea how authentic it is. I've made it a few times over the years, and it is a large enough (and heavy enough) treat for a crowd. Think of a rich fruit cake that's more bread than cake. I'll reprint it here with plenty of time before the election in the event you still have neighbours you wish to share cake with afterward.

You Will Need:
Yeast Dough:
1 cup diced, peeled raw potato
1 cup milk
1 teaspoon salt
2 tablespoons sugar
2 tablespoons butter
1 cake yeast (I used 2 1/4 teaspoons granulated dissolved in 1/4 cup of the warm potato water)
1 large egg
3-4 cups plain flour
Additions:
3/4 cup very soft butter
1 large egg
1 1/4 cups light brown sugar
1/2 cup brandy
1 cup raisins or sultanas
1 cup candied fruit
1 cup plain flour
1 1/2 teaspoons mixed spice
Cook the potato in water to cover until tender. Mash, and set aside. Pour scalded milk over butter in a large bowl and add sugar and salt. Stir until butter is melted. Meanwhile, proof the yeast if using granulated in 1/4 cup potato water. Then, stir into milk mixture. Add the mashed potato and then the egg. Add flour a cup at a time until you have a soft, but workable dough. Place in a buttered bowl, cover and let rise until doubled.
Punch down the dough and work in the butter in pieces. Add the eggs, brown sugar, and brandy. Coat the raisins and fruits with flour and add to the dough. Add remaining flour and mixed spice. Work very well so that dough is not streaky (it will be a mess, but stick with it (sorry, I just seem to be full of these tonight). Turn into a well-buttered 10 inch tube pan. Bake at 325 degrees F. for about 1 hour, or until cake is baked through inside. Cool in pan ten minutes, then finish cooling on a rack. When completely cool, frost with buttermilk frosting below.
Buttermilk Icing
1 cup granulated sugar
1/2 cup buttermilk
1/2 teaspoon bicarb
1/2 teaspoon vanilla extract or 1 teaspoon grated lemon rind
1/2 cup butter
Combine all, cook over medium heat in a medium saucepan until it reaches 230 degrees F. on a candy thermometer. Remove from heat and let stand 5 minutes. With a hand mixer, beat until icing begins to thicken. Spread quickly on cake.

Here's the Parkin I made for the 5th. This was the first year I was smart enough to bake it well ahead, and use a larger pan. Look, it didn't sink in the centre! 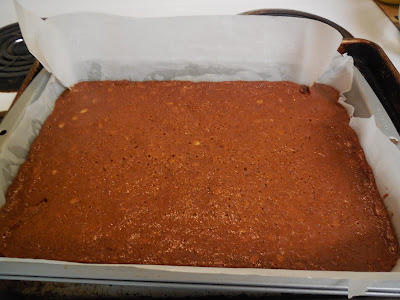 Yes, it is mostly golden syrup, treacle, and brown sugar...but there's oats so...health food! I didn't make toffee apples, because no one likes them (except me).

I'm going to crawl back into bed, and try to keep the boys from coughing/breathing within ten yards of me. I've never had strep throat and I'm hoping to keep it that way. I will say that I appreciate living across the street from Children's Hospital when Danny is having trouble breathing at 3 AM. I remember the frantic drives to the nearest hospital half an hour from home when we lived on the farm, and this is much, much, better. Much.
Posted by Goody at 9:58 PM
Labels: 2016 Election, Cake, Chicago, Childhood Memories, Election Day Cake, Family Memories, Guy Fawkes Day, Historical, Hot Dogs, Parkin, They Fuck You Up Your Mum and Dad

Umm, no offense but I like my Hebrew National beef hotdogs on a poppyseed bun with mustard. I guess that's my Prussian ancestry coming through with my preference for wurst und senf.
I love those 2 tone jeans your sporting!
Sorry y'all are so sick. I hear the flu bog going around this year is particularly nasty - give all plague mongers a wide berth!

This election is an all new low for the US IMHO. Given what I observed visiting a friend who lived in Honey Boo Boo land (north Georgia) in 2012 I'm not surprised. Bankruptcies, pawn shops, repossessions, unemployment, and whatever those things where you borrow $ against the pink slip of your vehicle were rife. People are scared, and living in fear makes you angry, and being angry makes you do stupid things. Granted most of the crap being pawned was rubbish anyway.

Sorry to hear your household is suffering. Hoping that you get to eat that election cake with feelings of relief and even elation, rather than otherwise.


I love your two tone jeans and you look pretty good for a sick woman. We've all had a virus or bug in our house and it lasts for weeks unfortunately...

Let's keep our fingers crossed for rationality and sanity in the election!

@Bibi
Those "Get cash quick" places are terrible-sometimes they end up paying 500% in interest as it is a short-term loan and falls below the regulations. They prey on people with no access to a proper baking account. At the same time, if they're outlawed, then the desperate have nowhere at all to get loans as banks aren't obligated to do business with anyone. It is a vile system and I can understand people being fed up. I just can't understand why they think a clown with a big mouth is going to make things better for them?

@Radostin
Thank you-I hope we get relief too (I might not go as far as "elation")! Either way, it will all be over in 24 hours. I hope. We don't need a repeat of Bush v. Gore.

@Ann
I didn't know you had compulsory voting-that must change things a great deal. We expend great efforts in the US denying the vote to people.
Sure you don't want me to send you a jar of the relish? It would make quite a statement at Christmas on a cheese-ball.

@Vix
Thank you. You've had a tough time of it in the UK too.
They boys are dragging along, but generally on the mend.

@Veronica
I'm sorry you have it at your place too. This has been a bad season and it has only started. Hopefully, we're all building immunity for smooth sailing through the rest of the year.

:-( Commiserations. Everyone here is stunned - I can only imagine for you guys it's like it was here after the Brexit vote; shocked disbelief from half the people, and an obnoxious outpouring of racism from the others.