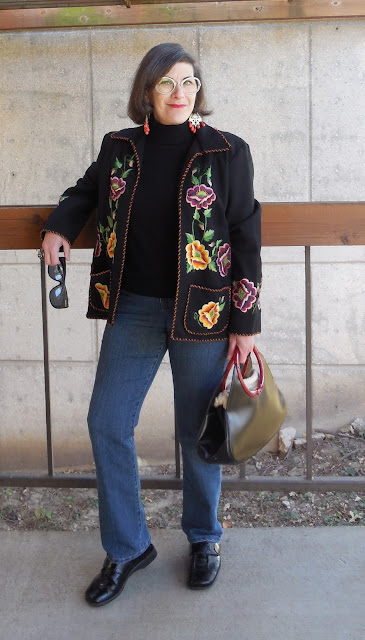 I have a new favourite jacket (I know, I'm fickle). This is the third Mexican tourist jacket I've bought, and it is by far, the nicest. The heavy, unlined flannel is warm, doesn't wrinkle and goes with just about everything in my wardrobe. I don't know enough about these jackets to accurately date it, but someone out there does-feel free to add any information you'd like to share in the comments.

This jacket is machine embroidered as far as I can tell. My other jackets are hand embroidered with yarn rather than floss. There's no label, but it does feel mass produced. No matter, I love it anyway and plan to wear it at every opportunity before the weather turns too cold. 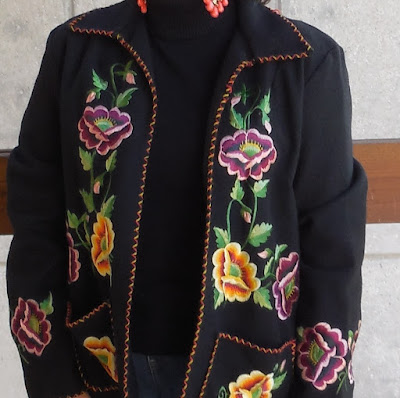 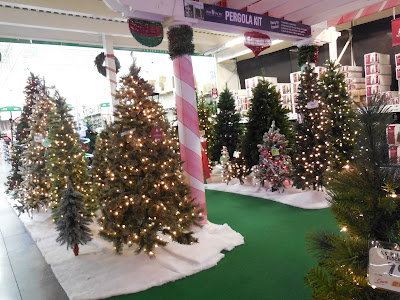 Our old  artificial tree is showing wear, so it was off to the Menards for a new one. The last tree was purchased used at Goodwill for ten bucks when Danny was not quite four, so I do think we got our money out of it. 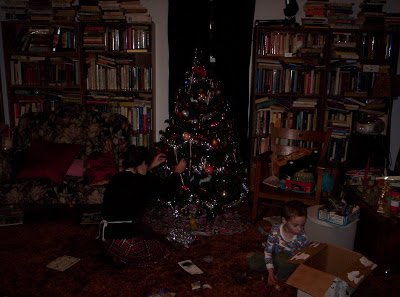 That's the old tree the year we bought it . I had a box of old ornaments I hadn't opened in twenty years that Danny thought of as a treasure chest. I don't miss the drafty old farmhouse in the middle of nowhere. I thought I would, but I do not. At all. 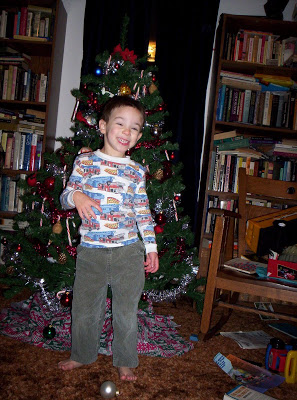 This might be the last time he had short hair. 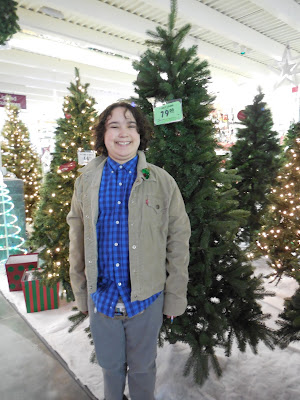 Fast forward to today. Danny is standing beside the tree we eventually settled on. At 7ft. it is a bit taller than the old one, but not so big that it will be a nuisance. It took him an hour and a half walking around with a notebook making comparisons before settling on this one. I was pleased he went for an unlit, inexpensive tree. For a moment I was nervous as he eyed a massive white tree, but he thought better of it. 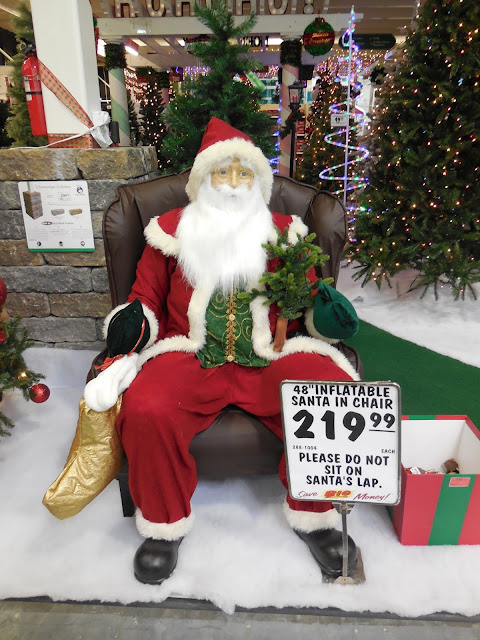 We found Santa. I'm not sure I like the idea of a blow-up Santa doll. You should see the other things they have on offer at this store.

Oh, what's this we have here? Wouldn't that be a conversation piece all lit up in front of the house? Sort of reminds me of that modern art they had in front of the Louvre last year... 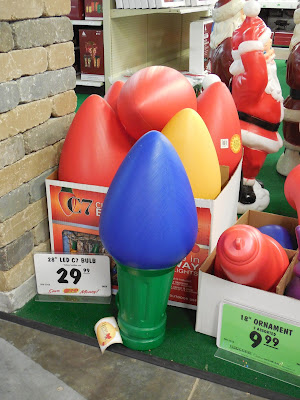 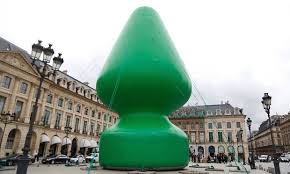 But hey, that's modern art for you. If you hire McCarthy to do a large inflatable, you sort of have to expect something like that, but I'm not sure what Menards was thinking. Right. Moving along...

The old tree will be going in front of the house to be converted into a giant bird feeder. We went out collecting pine cones last week, and we'll slather them in sunflower seed butter and various bird seeds, dried fruit, etc. I have some shatter-proof outdoor ornaments as well. I hope that works out (and that the squirrels won't steal it all) and doesn't blow away in the first storm. I'll get some bricks to weight it down.

The gingerbread men are baked, decorated, and ready to wrap and put on the tree. This is Danny's job now, and I take a hands-off approach to it all. I'll never be the sort of person that re-does the tree after the kids go to bed and blame it on elves. I can't imagine my life ever getting to the point where the decorating of a Christmas tree would be so important that I'd re-do my kid's decorating.

Thanksgiving was quiet, the neighbourhood was abandoned (most of the college students head home for the holiday) and Danny spent the afternoon adjusting the tree and shoving nails of cloves into oranges. I made a baked cod with dressing which we call a "Massachusetts Turkey." The  weekend has been nice so far. We did a short visit to Des Moines, Iowa which was lovely (I'll have photos in a forthcoming post) and a trip to Lincoln, Nebraska. I didn't go near any of the Black Friday madness, and we've been enjoying some wonderful birding at various spots around Iowa and Nebraska. 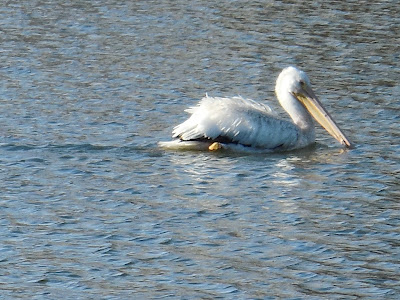 There were a great number of pelicans about, which was great as Danny hadn't seen one yet. Anytime he can add birds to his "life list" he's happy. Until you see them taking flight it is hard to imagine just how large pelicans are. 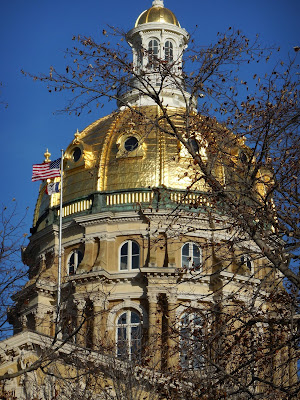 I'll leave you with a preview of our visit to the Iowa State Capitol, with a promise of interior photos coming soon. It is a remarkable building, and we had such a lovely time touring and admiring it. 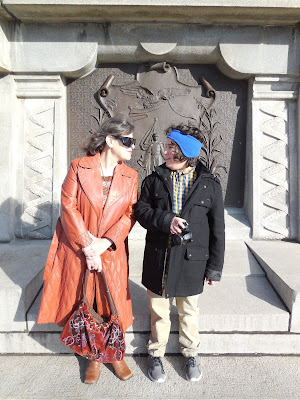 Hope your week has been as fun an interesting as mine. I'll be over to your blogs getting caught up.

It sounds like you've been having a lovely break. Visiting different places and bird spotting sounds ideal to me! I dare say you checked out a couple of thrift stores, too?

I love the Mexican tourist jacket; so colourful and you have three! Looking at it more closely it seems that if you had a plain jacket and some floral patches or something you could jazz a plain jacket up to look very similar; in fact Suzanne has done something like this with a bomber jacket this week...

Danny was so cute! Was that photo taken in the farmhouse? It's good you don't miss it.

The new Christmas tree looks amazing and what a good use you are putting the old one to. I think we probably need a new one and like you I let OH and the grandchildren decorate it; if it's wonky and not quite decorated evenly I really don't care. After years of doing the same jobs it's good to hand some of them over to somebody else!

Looking forward to hearing more about your trips.

That is the most gorgeous Mexican jacket I have ever seen. It would be my favorite jacket too.
Inflatable Santa looks a bit emaciated and creepy for $219. Aren't you all organized for the holidaze!
Living in older homes is largely romanticized I found out when living in some of those damp, drafty, Victorian homes in San Francisco during my university days. Plumbings a bit smelly & dodgy too.
I used to put a splash of vermouth in the turkey gravy when I celebrated T-giving- it's spicy & citrusy zip went well with turkey!
Looking forward to the photos from your recent trip(s) as I've only been to Chicago as far as the Mid west goes.

Danny has such a winning smile. I'm not usually a fan of youngsters but I know if we ever met I'd like him a lot.
I love your Mexican jacket and am dying over the leather beauty in the last photo.
Glad you had an interesting Thanksgiving and celebrated how you wanted to rather than following the expected tradition.
I'm not into Xmas but having to endure a constant feed on Facebook of photos of Xmas decorations, selfies at German markets and mawkishly sentimental TV adverts are just the kick up the arse I need to book a New year escape to India.
Sod the baby Jesus's birthday - it's mine! xxx

This possible be our first year doing a fake tree. When we had our land we went and cut one.
We sold it this last fall.
I do love your jacket.

There are vintage embroidery patterns around for making your own tourist jackets (for people that couldn't get away I guess). Most of them are pretty simple designs.

Yep, that was the library in the old farmhouse. It feels like a million years ago, but I like having central heat and air conditioning!

@Ann
It can be awful if you want to escape it. I hope you find some peace away from the festivities.

@Bibi
Des Moines is far nicer than Chicago-and I say that as a former Chicagoan.

I can't imagine anyone (normal) buying an inflatable Santa.
*shudder*

@Vix
Don't let the smile fool you-he swears like a sailor! He recently introduced me to the expression, "Million pound shit hammer." I'm going to embroider it on a shirt for him.

They've started doing Christmas markets in Omaha which is absurd.
Are you a Christmas baby too? Danny is a few days before and really likes upstaging baby Jesus!

@Dora
I'm a fan of artificial trees-and you don't forget to water them.