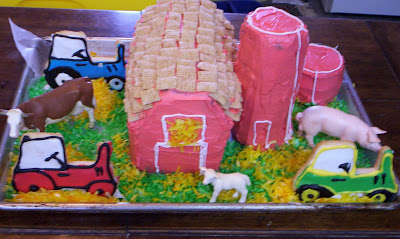 I asked Danny what sort of a cake he wanted for his half-birthday (with the intention of baking a cake and cutting it in half) but he surprised me by requesting the same cake he had for his third birthday. That seemed kind of boring, so after a bit of questioning I was able to discern he really just wanted tractor cookies again. Good thing I saved the template. I figured, after all the chaos the past few weeks it would be a nice break.

The barn is made by dividing a two layer cake recipe between an 8x8x2 square pan, and a loaf pan. The 8x8x2 is cut in half and layered with frosting. The loaf cake is inverted and then trimmed at an angle down the sides to make the roof. The silos were made by stacking sandwich cookies (I made the chocolate malt cookies) together with frosting. The roof is Chex cereal.

I broke the project up over two days and I'm really glad I did. I won't lie and say, "Oh, it was simple to do", because no matter how carefully you plan, there's always the matter of sliding silos or cakes that do not cut cleanly and well-frosting hides quite a bit, you know?

In the coming weeks I'm going to start a "cook your way through a book" project...except it isn't a cookbook. Much like the Home Baking With Counterpunch project, I'm probably the only person outside of a few Classicists that will find it amusing, but what the heck. Life's too short not to enjoy your time in the kitchen.

Danny's half-birthday is actually tomorrow, but I have a busy day planned so I'm posting the photo now.
Posted by Goody at 2:25 PM
Labels: Cakes, Dannypants, Home Baking With Counterpunch

Do you have a portable fan you can set up to blow hard onto the farm?

BTW, I love it that you're noting his "1/2" birthday. I do that every year too! It's just a little thing I do for myself - no one else does anything - but I like to. (My half birthday is also my grammaw's birthday -- she died almost (gasp) 30 years ago!)

My mother always gave me a half-birthday cake (lemon, with lemon frosting-every year)but it was actually half a cake.