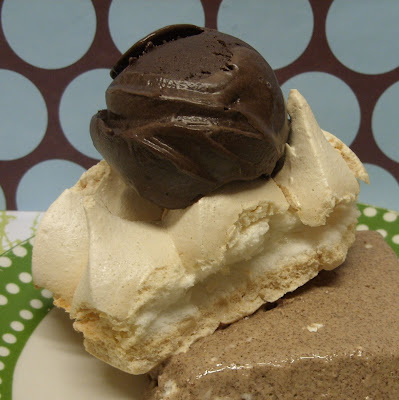 It isn't too late to make something for your Valentine's Day dessert. Someone skilled could have arranged this in a better way, perhaps taken a decent photo. That isn't me. Still, it made a lovely "pre-Valentine's Day" dessert, and the meringues are so light you almost forget about all the fat in the Bavarian. And the ice cream. The meringues are fat-free, so there you go!

For the Ice Cream:

Scald milk and cream in a saucepan. In a large, heatproof bowl whisk together the egg yolks and sugar until smooth. Slowly beat in the milk mixture in a thin stream. Return combined mixture to pan and cook, whisking gently until it reaches 170 degrees F. Remove from heat, Strain into a heat-proof bowl. Whisk in cocoa and malt powder. Chill before processing either in an ice cream maker, or as I did in a metal tray in the freezer (scrape with a fork every 20 minutes until firm).

Pipe into squares on a parchment lined baking sheet. Bake at 275 degrees F. for about an hour, or until mostly dry. Turn off oven and let sit several hours until dry.

For The Bavarian Cream:

Soften the gelatine in the 1/4 cup of milk. Combine egg yolks and sugar in a saucepan, whisking well. Add salt. Slowly whisk in the scalded milk and shaved chocolate. Cook over low heat, whisking until mixture reaches 170 degrees F. Remove from heat, whisk in the gelatine and when completely dissolved, strain through a sieve into a clean bowl. Chill until just set. Meanwhile, beat the whipping cream until stiff. Fold whipping cream into the slightly set cream mixture. Pour into an oiled 1 quart mould (or several small ones) and chill several hours before unmoulding.
Posted by Goody at 7:37 PM
Labels: Bavarian, Chocolate, Cocoa, Egg Whites, Ice Cream, Malt, meringues, Valentine's Day, Whole Milk