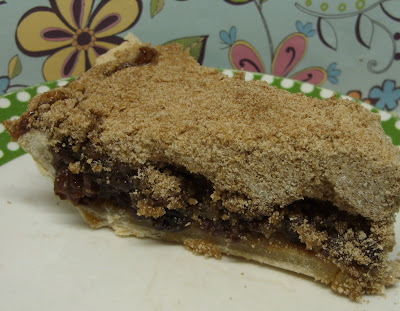 We were divided over this pie-the men loved it, I did not. Admittedly, while I like raisins, raisin pie is not one of my favourites. What I found really remarkable was the thickness of the crumb topping-look at the photograph. That's quite a ratio of fruit to crumb with the topping clearly winning. I found it too much, but again I'm biased. Mr. ETB feels that is the best part of a pie.

I followed the recipe in Marcia Adams, Heartland the Best of the Old and New From Midwestern Kitchens. This is a lovely books (as are all her books) and most of the dishes (like raisin pie) are familiar having lived in Illinois in the 60's and 70's. While some of the recipes are newer, they still reflect regional history and make use of abundant local items.

I did not use the pastry recipe Adams suggests as it relies on vegetable shortening and vinegar. I used to make that sort of a crust before they started messing with the Crisco. It is true that you will get a flaky crust with the old, "no fail" pie pastry recipes, but I get a great dose of heartburn as well. I went with an all butter crust instead. I'd stick to whatever you typically use for a 1 crust pastry, as the star of this shoe is pretty clearly the topping.

Prick pie crust all over and blind bake 5 minutes. Remove from oven and set aside.

In a 2 quart saucepan combine raisins, 2 cups of the water (reserve rest), lemon juice,
and salt. Bring to a boil over medium high heat stirring occasionally. In a small bowl, combine cornstarch and remaining water, beating until smooth. Whisk it into the raisin mixture and boil until bubbling and thick-about 2 minutes. Beat in butter. Remove from pot and cool before filling pie. Meanwhile make the crust.

For the crust: combine flour, sugar, ginger, cinnamon, and soda. Cut in butter until you have crumbs.