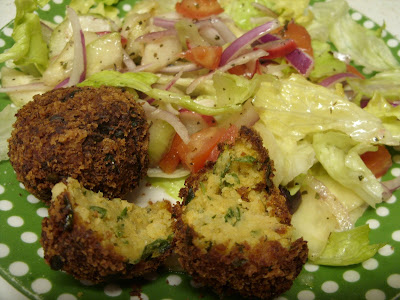 Danny's first serious allergic reaction was to tahini paste. He isn't allergic to sesame seeds, so the best we can figure is it was cross contaminated with either almonds or peanuts. I tried making a small batch at home today and it was successful. This has the added advantage of being able to make what I need without buying a large jar that would eventually go rancid on me.
I do not have a blender or a food processor, so I used an electric coffee grinder. In short, I put in sesame seeds, whirred it until it was mush, added a few drops of water, and that was that. To serve, I added garlic, lemon juice, salt and pepper. It was so easy, I couldn't believe it. I'm still kind of stunned that it worked.

The falafel are most certainly not falafel in any guise I'd know. Still, they were enjoyed and made use of stuff I had sitting around at home.

Combine, chill 30 minutes. Remove from fridge and form into balls. Roll in breadcrumbs and return to fridge to chill until you are ready to fry. Drop falafel, a few at a time into very hot oil and fry until deeply browned (about 5 minutes). Makes about 18 medium sized falafel.

Combine in a bowl.