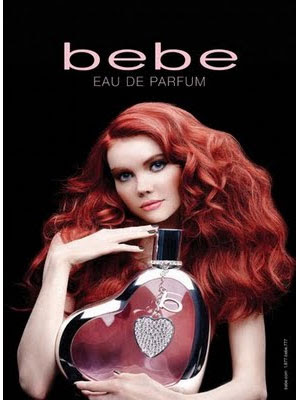 I've never shopped at Bebe, so I can't say much about the brand other than I already loathed their ad campaign. I bought a tiny bottle at Marshalls for five bucks and figured if it was terrible, at least I'd get a cute bottle out of the deal.

The bottle, is impossible to manage with arthritis. Perhaps the spray bottle is easier to grip and remove the cap, but I've been fearful of dousing myself each time I attempt to open it-not that a dousing would be a big deal as Bebe has a microsecond of longevity. They call it a "perfume" but to my mind this is a cologne.

Bebe isn't terrible. It isn't anything special either, but for a perfume in the cheap end of bargain, it really isn't bad. I like the cedar and sandalwood notes that dominate the opening, and the sweet pea and rose that follow. There's a troublesome mango note that is somewhere between 90's hairspray, and a fresh bottle of multi-vitamins. The perfume would have been better off without mango, though I understand perfumes need fruit notes to have mass-appeal with today's youth market. Plum might have been better-mango and musk in perfume can come across slightly rank (and not in an interesting way).

I wouldn't say Bebe is without any positive qualities, though it honestly isn't a perfume to my general taste. I like the tuberose here (instead of being suffocating it smells like a plastic makeup bag that's picked up a lipstick and powder smell over the years) and the peony is a nice inclusion I wouldn't have expected. I'm certain from looking at the ad campaign, I'm not the demographic Bebe is trying to market a perfume to.

Sometimes I review a fragrance and don't have much feeling about it either way. Bebe is pleasant enough, inexpensive, and largely inoffensive. The silage isn't much, and the longevity is crap, but for five bucks, I can't really complain. Yes, the florals are on the synthetic side (I'm not opposed to synthetic materials, I'd just prefer it a bit less raw around the edges) and it could have been better balanced between the woods and florals, but that feels like struggling to find something worth complaining about. Bebe might not be for me, but there honestly isn't anything wrong with it. I'll probably pass it along to a young person (this would be great for a teenager) and consider it an interesting but ultimately not-for-me perfume.

I wonder if this is the shortest fragrance review I've written?
Posted by Goody at 5:32 AM
Labels: Bebe, Fragrance Review, Reviews

We don't have Bebe over here. For some reason, from the title I imagined it would be something 70s.

@Mim
You're not missing out on much-the clothes are kind of trashy.