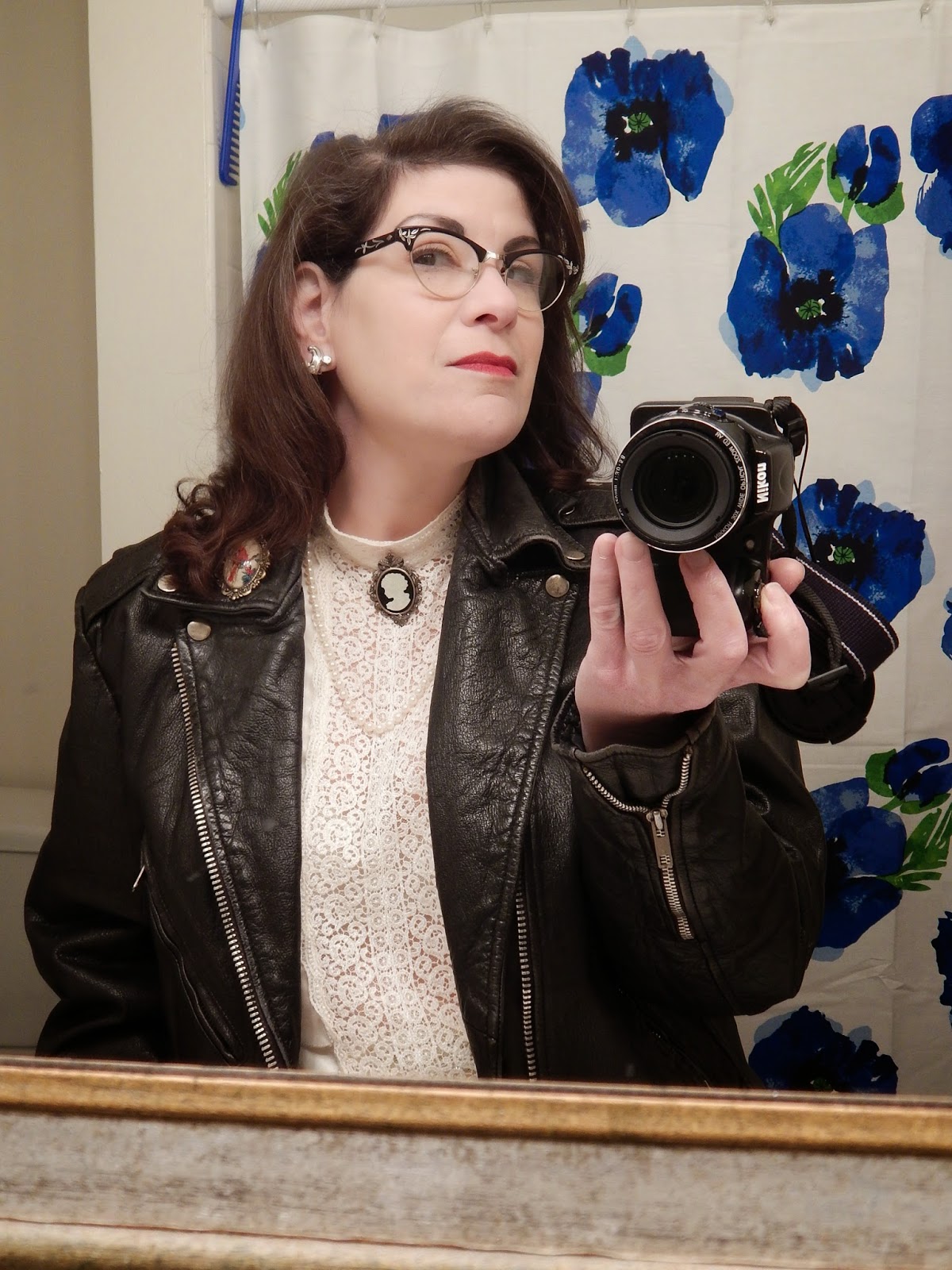 My dad liked to tell the story about my sister seeing the Maxwell Street Market in Chicago for the first time (late 50's, early 60's?) and promptly freaking out. She didn't like crowds, noise, and open air markets. "What's wrong with those people?!" she asked. Amused, he retold the story several times through the years. I however, had no such aversion. From a young age, I happily tagged along whenever I heard, "I'm going to Maxwell Street (or sometimes, Roosevelt Road) who wants to come with?" Why wouldn't I? Clothes, fabric and sewing notions, food-real food not some vile thing my mother concocted with help from her enablers at the hippie health food store-it was a child's idea of paradise. Well, the younger child's anyway. No one was going to offer you a handful of toasted soya-nuts, or carob covered anything.

Maxwell Street market had permanent stores as well, with people on the street (I think they were called, "pullers") to encourage shoppers to the store. "Hey, I have the best deal on..." next thing you know you're the proud owner of a typewriter, or a fish tank, or an industrial sized roll of brown butcher's paper (that one really happened. We didn't need greaseproof paper for years). Every nationality you can think of was represented, and together with their dress, and food, it was like exotic travel for the price of carfare.

A short distance away, on Roosevelt Road was Chernin's, the best shoe store on earth. My dad had very large, hard to fit feet and this particular store stocked both work-boots and dress shoes. The women's department had the craziest, flashiest shoes to be found anywhere. My mother said the hookers all bought their shoes there, which might not have been too far off. At any rate, that didn't stop me. Decades later, I have kept several pair of shoes I bought there as they are so unlike anything else I've seen. Unique would be an understatement. My dad wasn't stupid- bringing a teenaged daughter with to buy shoes at Chernin's was going to get expensive (you couldn't invite someone and then not buy them shoes) but he never complained. I think he accepted it as part of parenthood, and as already noted, I was the only one willing to go with him. Besides, after all that shoe-buying he'd be hungry, so we'd stop at Manny's Cafeteria for something to eat http://www.mannysdeli.com/. I was also the only one willing to eat at Manny's, which I never understood because the place was incredible. Sure, the food was great, but the people-watching was superb. I'm glad to see after a web search that they're still around. I don't know if you'd have the same experience today, with everyone's eyes glued to a device, but I would, without fail end up having some fascinating, sometimes crazy, conversation with the stranger seated beside us.Sometimes the person would have been to Chernin's too, and we'd compare purchases. Cafeteria style dining is a communal experience (or it was) and I'm glad I was able to have it.

At some point in the early 80's, I decided I wanted a motorcycle jacket-I knew where I'd get it too. That was my hard-earned money, and I was prepared to haggle for the best possible deal. Turned out, I didn't need to. My dad knew someone, who knew someone (as it goes) and the negotiating was already concluded by the time I arrived to pick it out. The elderly Jewish immigrant who sold it to me was under the impression I was buying it for someone, and seemed genuinely concerned that I might be riding a motorcycle! Then, because he had been trained as a tailor, he spotted a button about to fall off the jacket I was wearing, and insisted on sewing it back on for me, in the store. 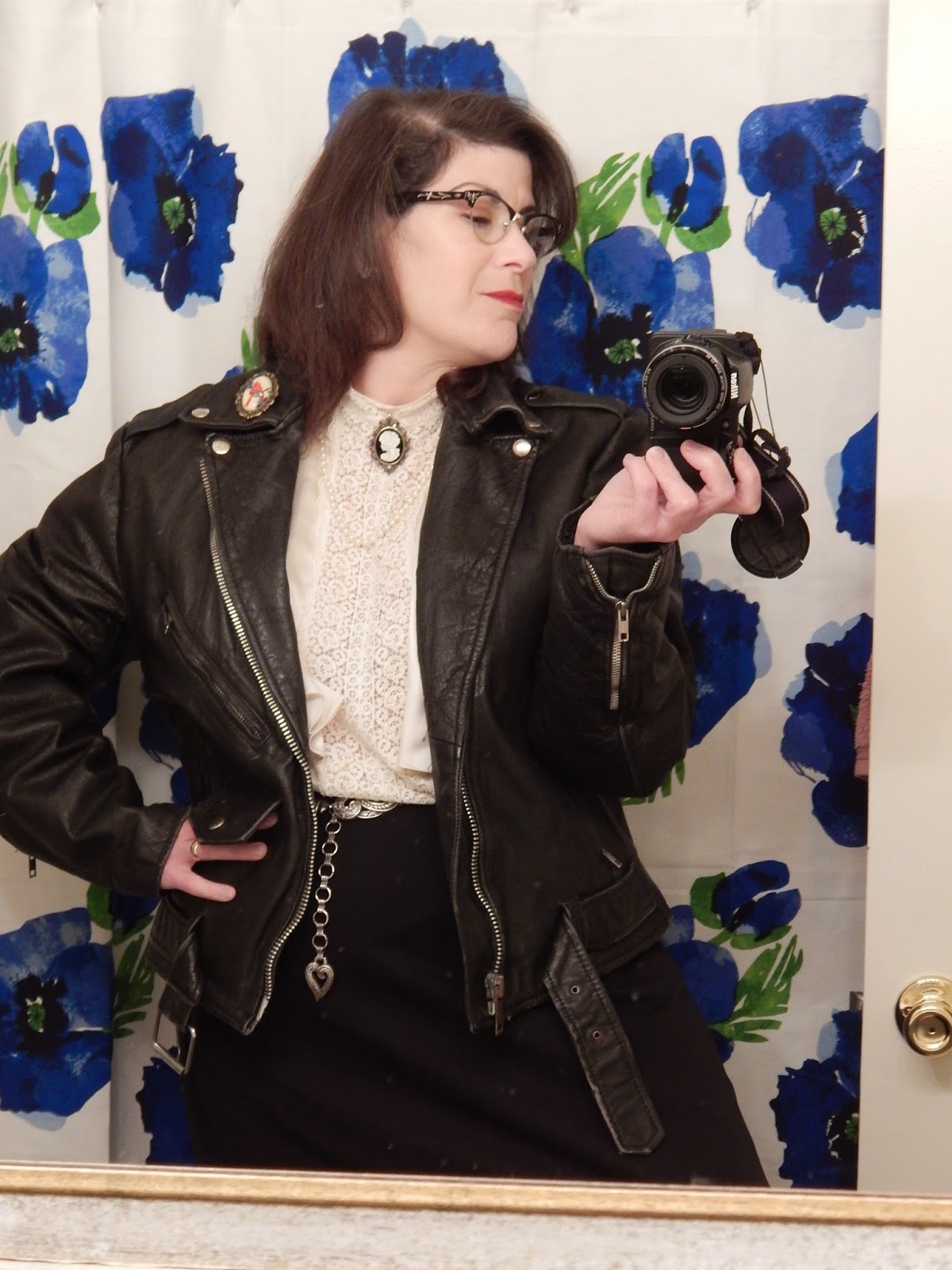 So many items of clothing have gone through my wardrobe, but this jacket has been a constant. I find it difficult to imagine a time when I wouldn't want it. I spent more than 30 years getting it broken-in. I couldn't possibly get rid of it now. At one point, when it was still new-ish, my boyfriend at the time offered to tie it to the back bumper of his car and drag it along a gravel road to help break it in. I declined the offer, but I did wear it on a near continual basis for several years. It has been to weddings (my cousin Roberta's) and funerals (my mother's). In the heat, or the cold, dressed-up or down, this jacket was the best money I ever spent on an item of clothing. The weather in Chicago is flaky, so the jacket was never packed away for summer (which was how I ended up wearing it to a funeral at the end of May when there were snow flurries).Weighing in at close to four pounds, this is not a flimsy article of clothing. If I were to take up motorcycling, this would be a good barrier between myself and the road when I inevitably would fall off the bike.  This jacket has been a companion through major life events, and feels a little like a souvenir of the late 20th century. Where my aging brain has let go of so much over the years, it takes little more than slipping into the familiar quilted lining of my jacket to bring back memories of shoe stores, cafeterias, and standing at bus stops in the terrible Chicago winter weather waiting for buses that never showed up half the time. When I moved to Boston in my twenties, the jacket came with and continued to do waiting for the bus duty, though the buses were more reliable (mostly). Now, in Nebraska it rarely warms me as I wait for a bus, but it is a welcome companion on walks, or as I have worn it in this post-to save an outfit from developing diabetes from its own sweetness. 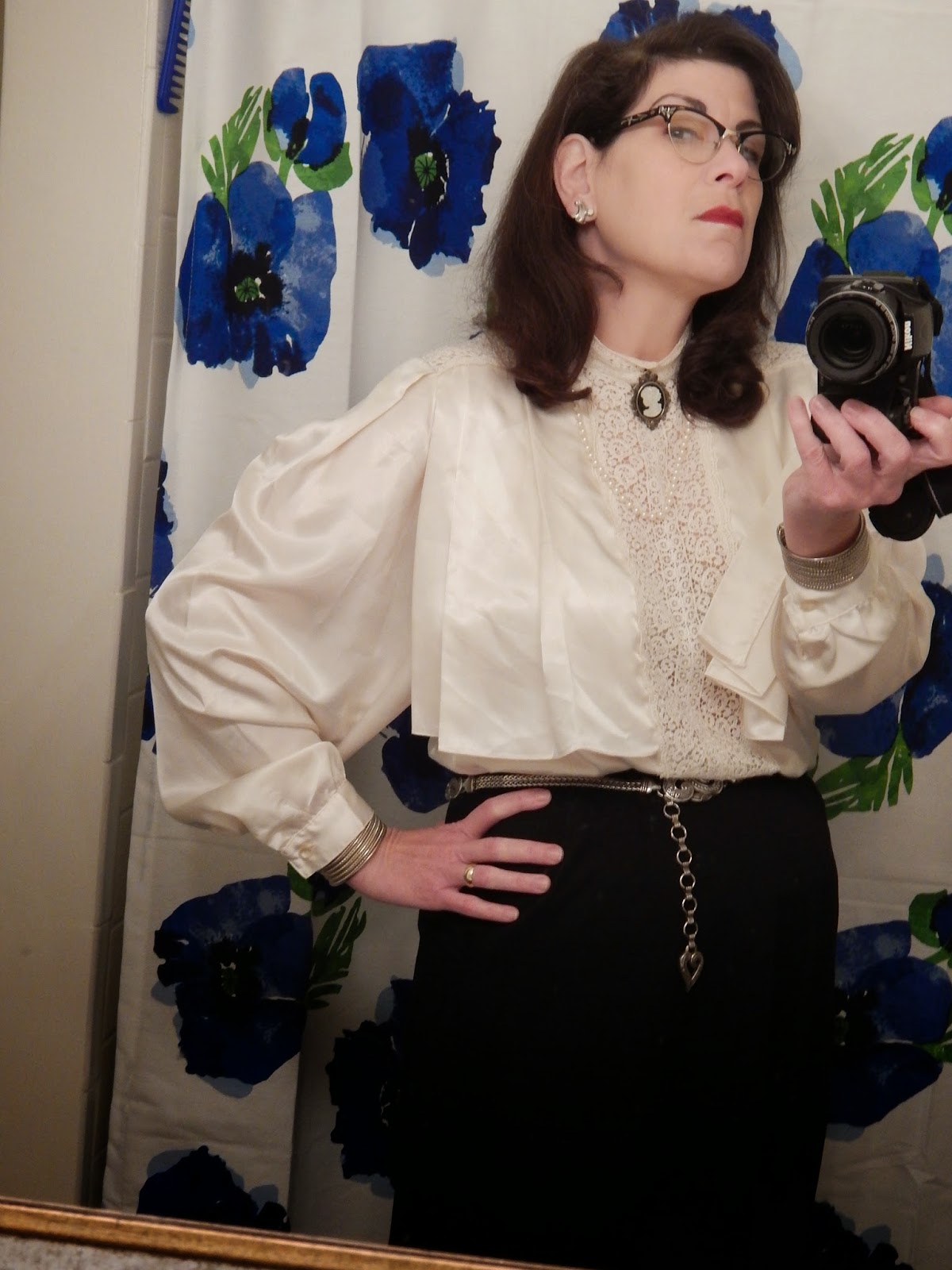 Satin and lace. That's a difficult look to pull off for anyone. I could have reached for a loud, polyester blazer but I remembered the motorcycle jacket and like I have so many times over the years, I pulled up that indestructible zipper, and set off to face the day. Then, my car died a few miles from home. At least I wouldn't be freezing to death waiting for help (I was able to get it re-started, and hobble it home without much trouble, but it could have been worse-and cold!). 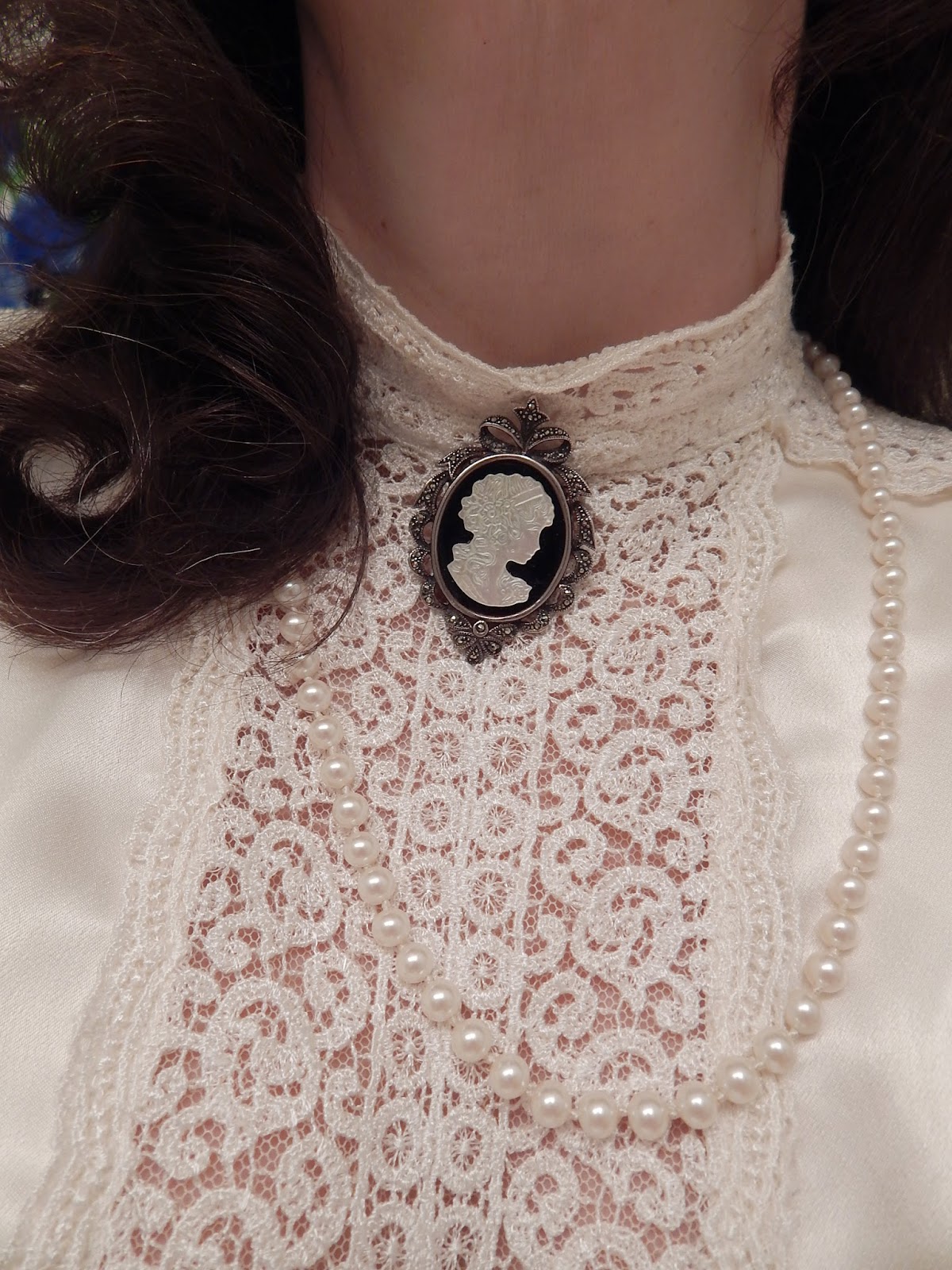 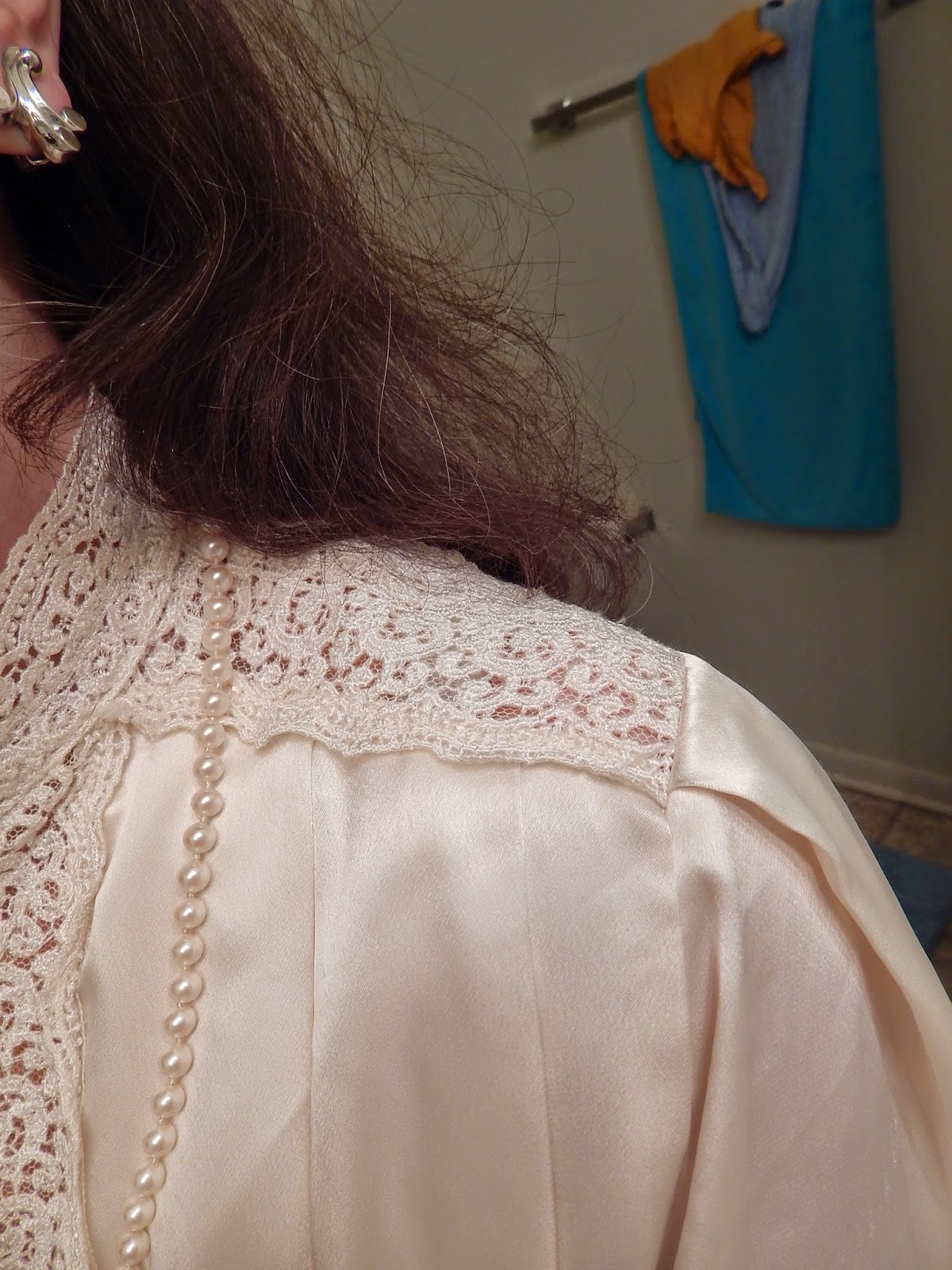 The shoulder detail is nice. It came with gigantic shoulder pads which I promptly removed and added to the large bag I keep for puppet making. They obviously make great wings, but I've found other uses as well. At some point I plan to affix them to a canvas and paint them, or perhaps construct large mobiles. Not everyone can claim to have hundreds of shoulder pads in a bag-that comes with a sense of obligation to do something interesting. I take artistic obligations quite seriously. 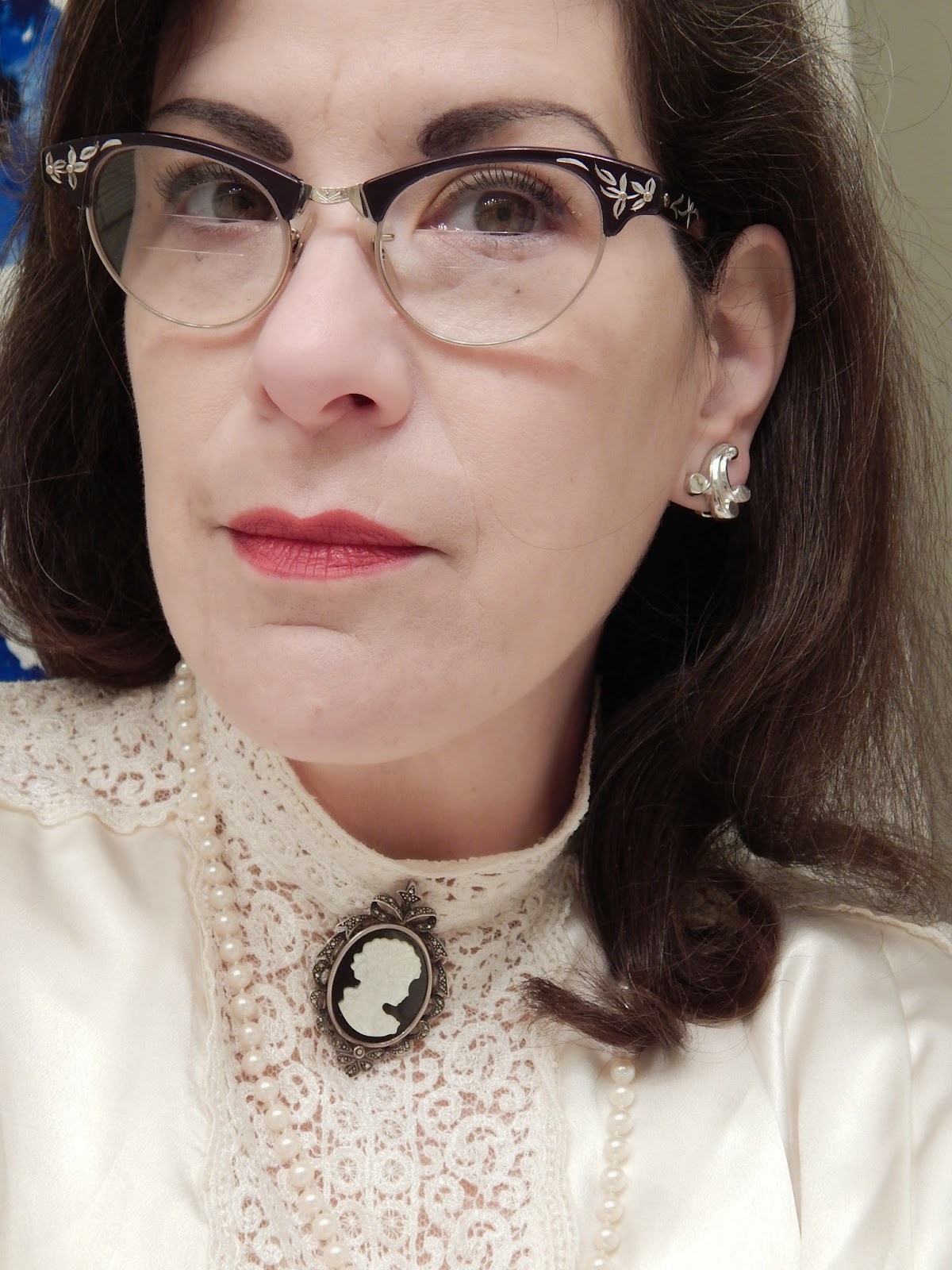 Still can't open my jaw very wide, or show much expression, but the eye swelling has mostly gone down. The eyelid still looks a little funny, but I'm probably the only one that notices it. 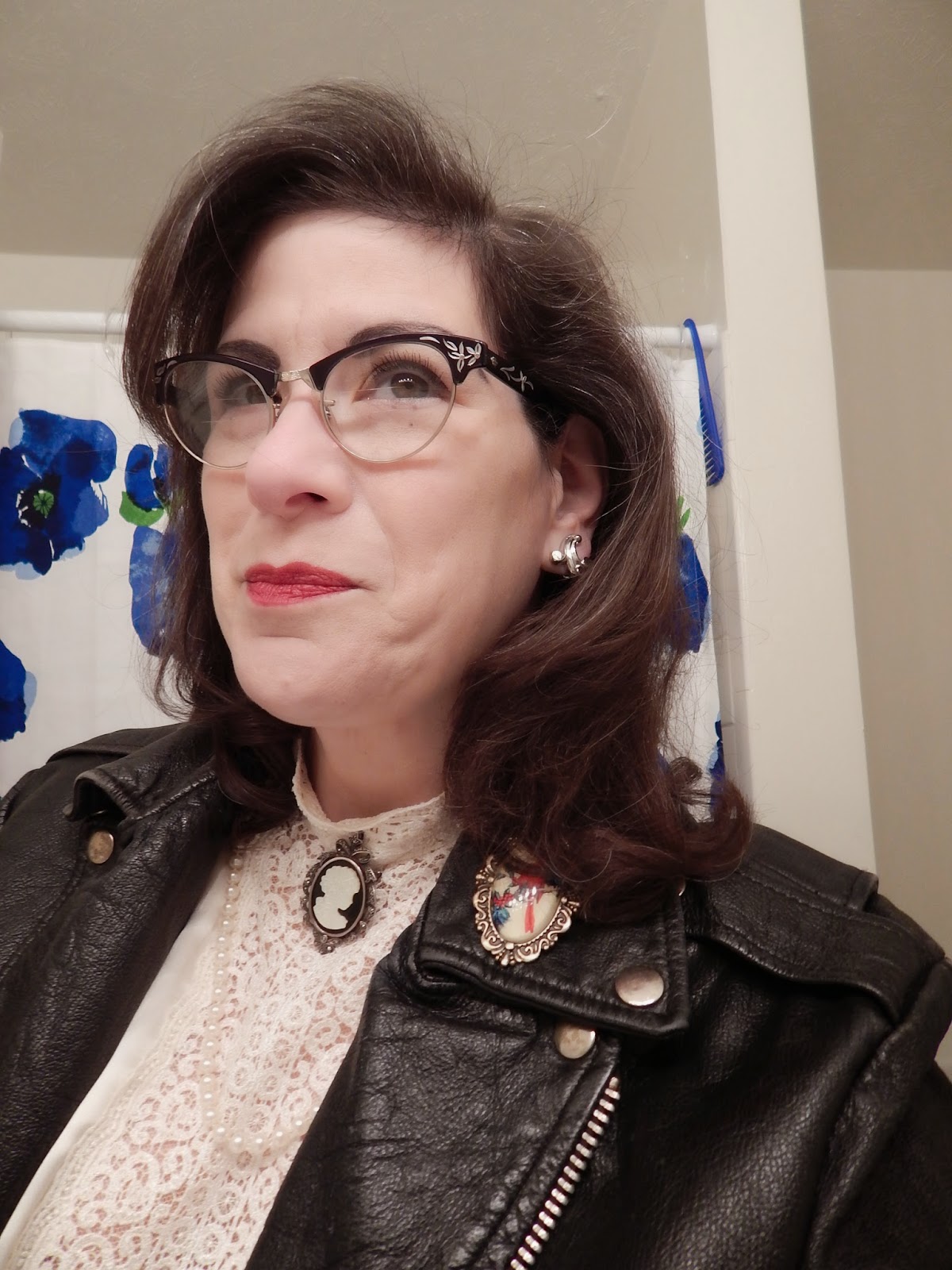 These days I rarely hang chains from the shoulder, or wear an armless denim jacket over it (that's been handed down to Danny) so instead I stuck on a brooch as I do with every other jacket I own. As I move into another stage of life I see no reason to stop wearing my beloved jacket, when instead I can adapt it to my current tastes.

Damn. All that talking about Chicago has me wanting a pastrami on rye...and I've been a vegetarian since 1983!

Mmmmm......pastrami on rye.....piled high & slathered with coarsely ground mustard.
My mom went through her 'hippy' health food phase too. YUK!
Maxwell Road shopping trips sound like when we used to go to San Francisco's 'SOMA' (South of Market St.) district. It was the wholesale center for nearly everything from flowers to fabric to whatever came off the docks that day. Now its all yuppified & hipstered.
Speaking of hipsters, I was invited to join Ello the newest & hippest social media site. I don't know about these Millenials, 'awkward' & 'agist' doesn't even begin to describe them. But what do I know, I'm just an elderly Gen Xer - all we ever excelled at was partying. At least tha's all I remember.
Glad to see you're on the mend!

"All we ever excelled at was partying."

You say that like it is a bad thing ;)

That's one great jacket and worth every penny of whatever you paid for it all those years ago. Its such a classic and why wouldn't you still like to wear it, adapt it to your current style and think about all those times it's been worn. Glad you are on the mend too.

"This girl wore a plaid skirt, knee socks, purple spiked heels, a leather motorcycle jacket. The thick eyeliner she sported didn't blend well with her Louis Vuitton purse. Her hair, long and curled demurely at the ends, was dyed raven black. She was everything I wanted to be." --Binnie Kirshenbaum, ON MERMAID AVENUE

It's good to know the swelling is going down - may your recovery continue!

That's a great story behind your jacket, no wonder you treasure it. And now you *have* to photograph those shoes, because they sound fab. I am intrigued as to what hooker shoes looked like back then ;-)

@Jayne
I really should wear it more than I do, but where I'm living now we tend to drive everywhere. This is more a commuter's jacket.

@Curtis
Mr. ETB says I *almost* make the family sound normal. I suppose time and distance has softened the edges a bit.

@Mim
I think my mum's idea of "hooker shoes" would have been anything with a spiked heel, or flashy colours. I promise the shoes I kept will make a future appearance on the blog, though to my eye they don't seem particularly trashy.