A Birthday, a Funeral, and a Root Canal 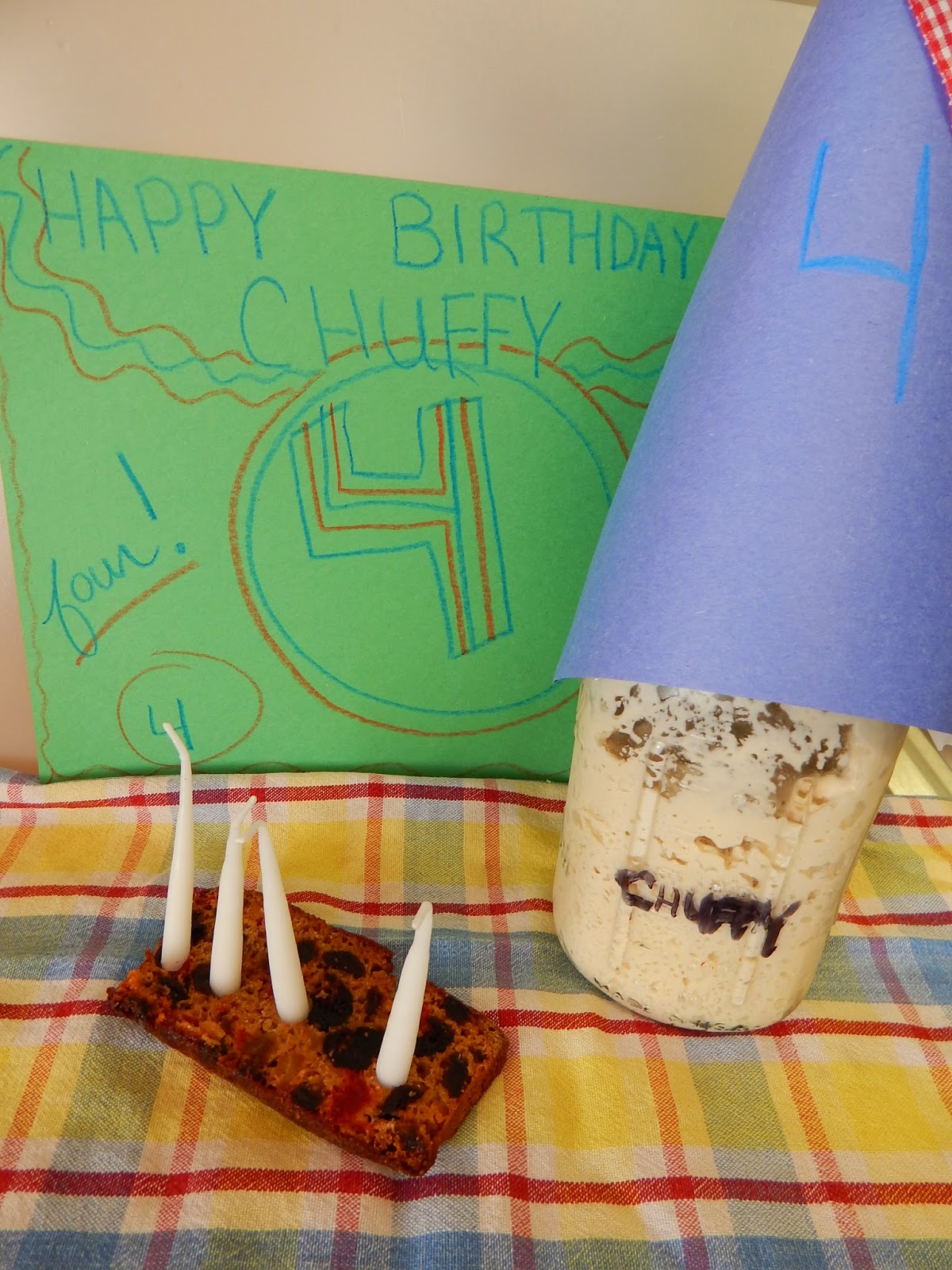 Let's do the Birthday first. Our Sourdough starter (one of three) "Chuffy" has turned four years old today. There were party hats, slices of tea brack, and much singing of Happy Birthday. If only children were as easy to care for as sourdough starter! Unfortunately, it is frowned on if you try to shove them in the back of the fridge and feed them only when you require them to do something. 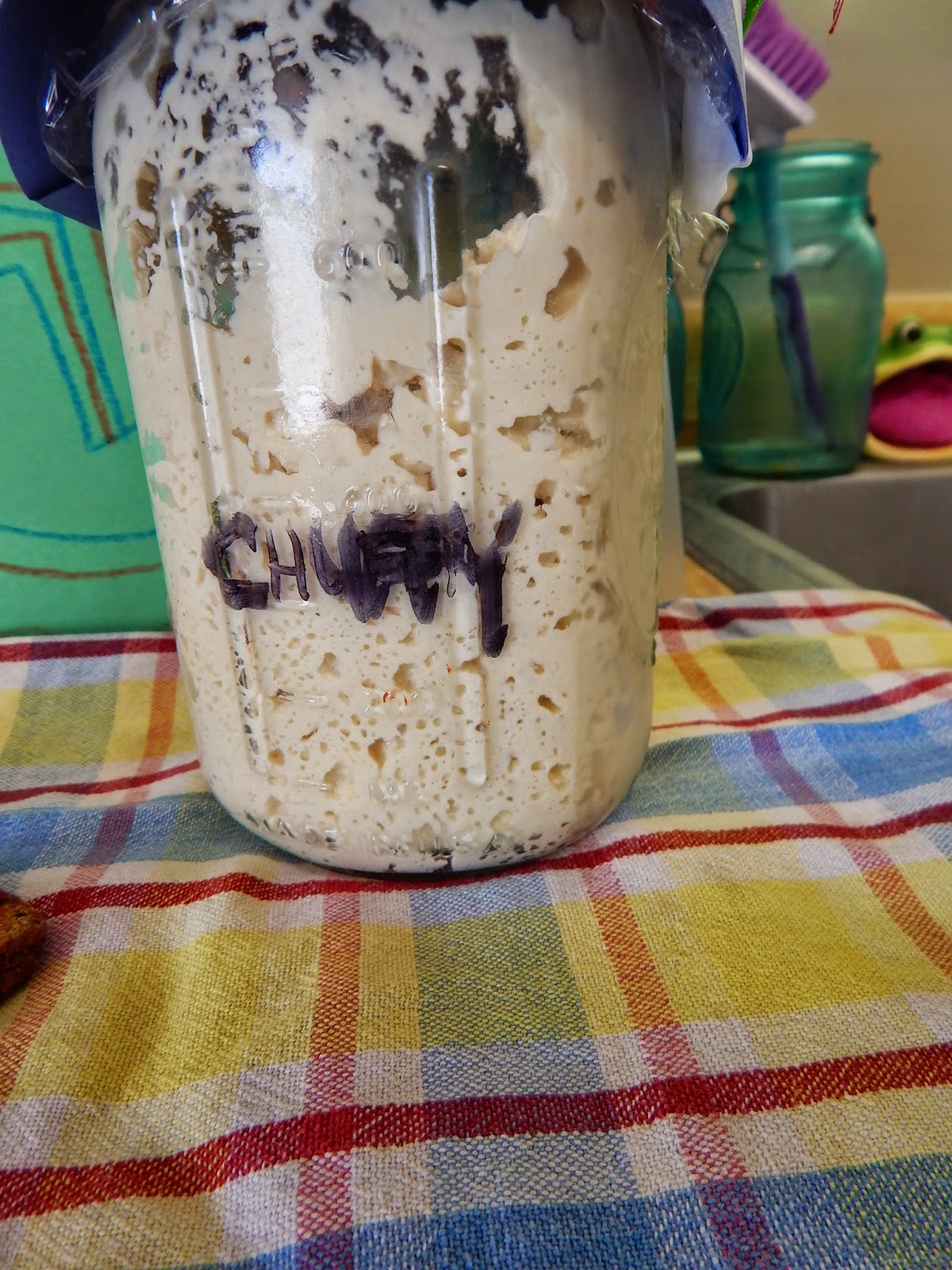 The way the starter has stuck to the glass almost looks ghostly. Day of the Dead starter! So that was Chuffy's birthday. There's Hartford Election Cake in the oven as I type, to be handed out on Tuesday. It is essentially a raised fruitcake from the Colonial period. The Puritans frowned on lavish celebrations at Christmas and other holidays, so election day became the stand-in celebration. I'm sure it didn't start out with 1/2 cup of spirits in it, but as with many recipes that have a long history, people have added their own touches. It would have almost certainly been baked with sourdough starter as commercial yeast wasn't available.  I did a post with the recipe on it here: http://eattheblog.blogspot.com/2012/11/hartford-election-day-cake.html

Before I get to the funeral, who needs some fibre in their diet? 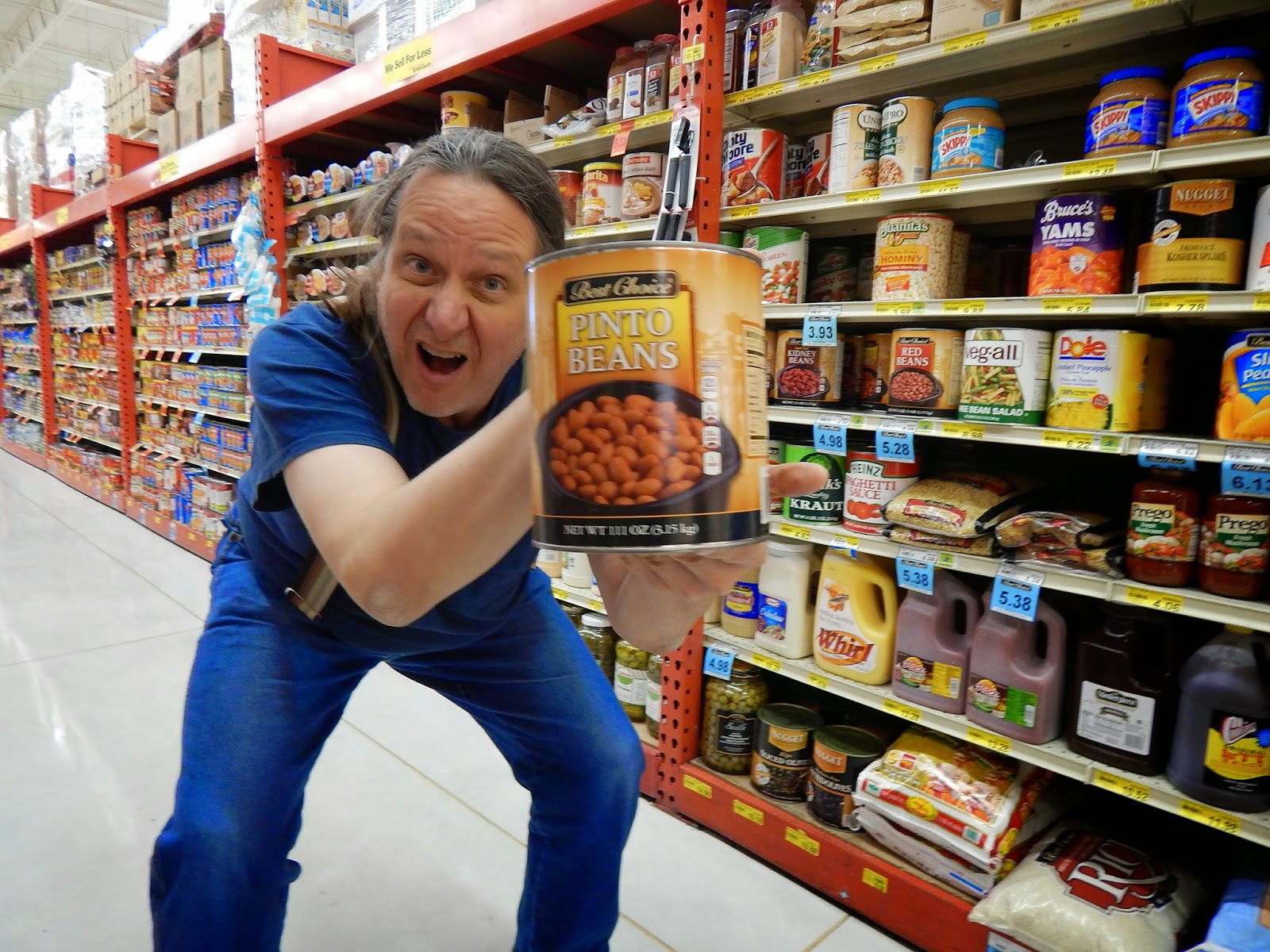 Super Saver had the largest tin of beans I've ever seen in my life. I almost feel inspired to start a taco stand-at at such cheap prices, I could really afford to be generous with the beans. You should always be generous with the beans. That's a face that just screams, "I got MY fibre today!" Imagine curling up with a good book, a gigantic tin of beans, and a spoon. That, my friends is what the American Dream is all about. God Bless America and her huge portion sizes. They don't give you tins of beans like this in Canada. Know what you get in Canada? You get these... 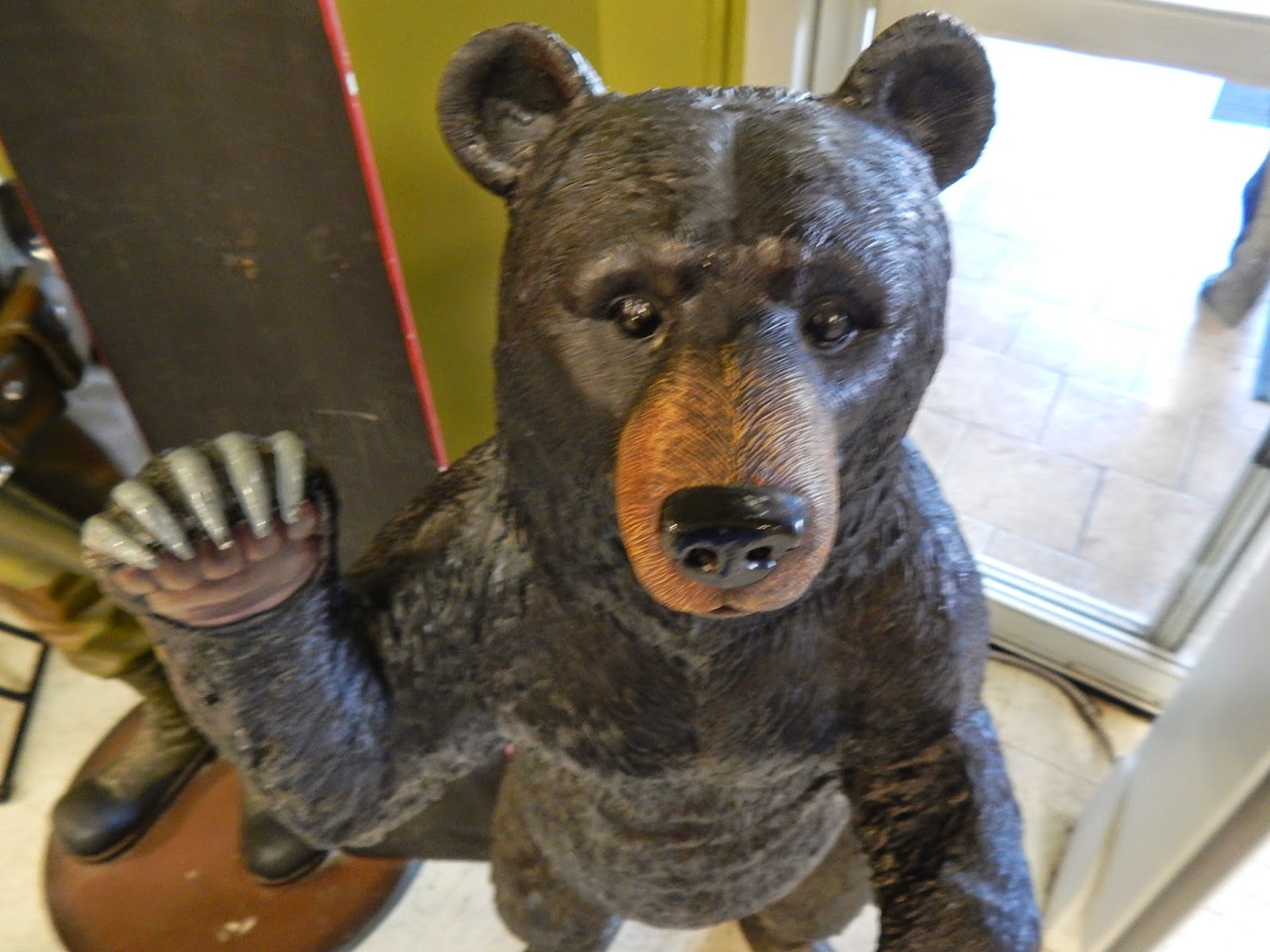 "Hello there friendly American tourist. Do you have any fibre for me?"
Remember, always hang your food far away from your campsite when sleeping in bear-infested woods. See, this is a helpful blog too. 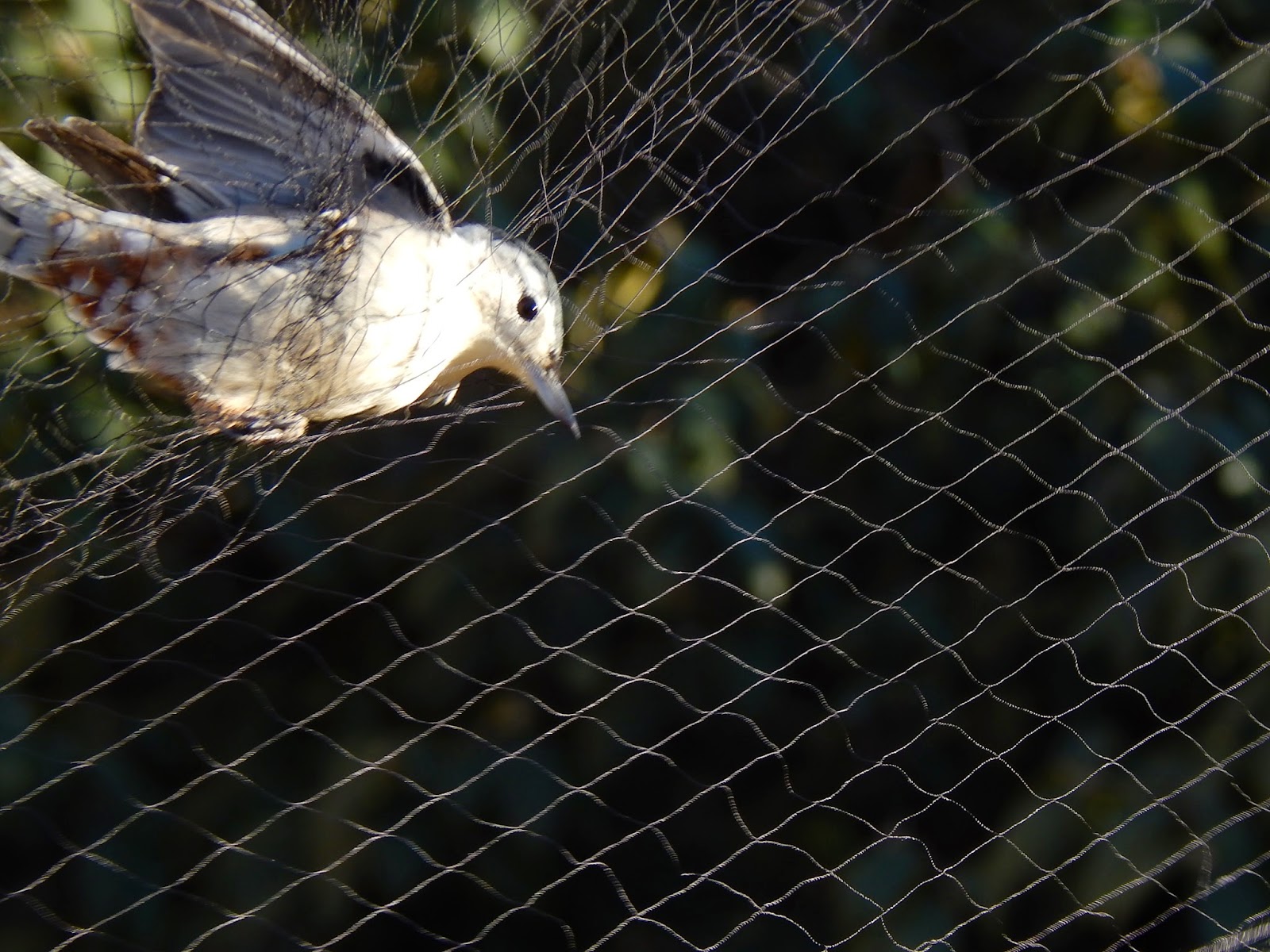 Yesterday was bird-banding. This fellow managed to get all tangled up, and the more people tried to free him, the tighter he grasped the net in his claws. Ever hear a small bird scream? Horrible!This little fellow was screaming the entire time...like he didn't stop for a breath. Telling a bird that you're trying to help doesn't calm them down, by the way. He finally got untangled, banded and was taken outside to be set free when...he dropped dead. In front of a group of small children. Ooops! That *almost* never happens. Except when it does. I told you he was so busy screaming he forgot to breathe. 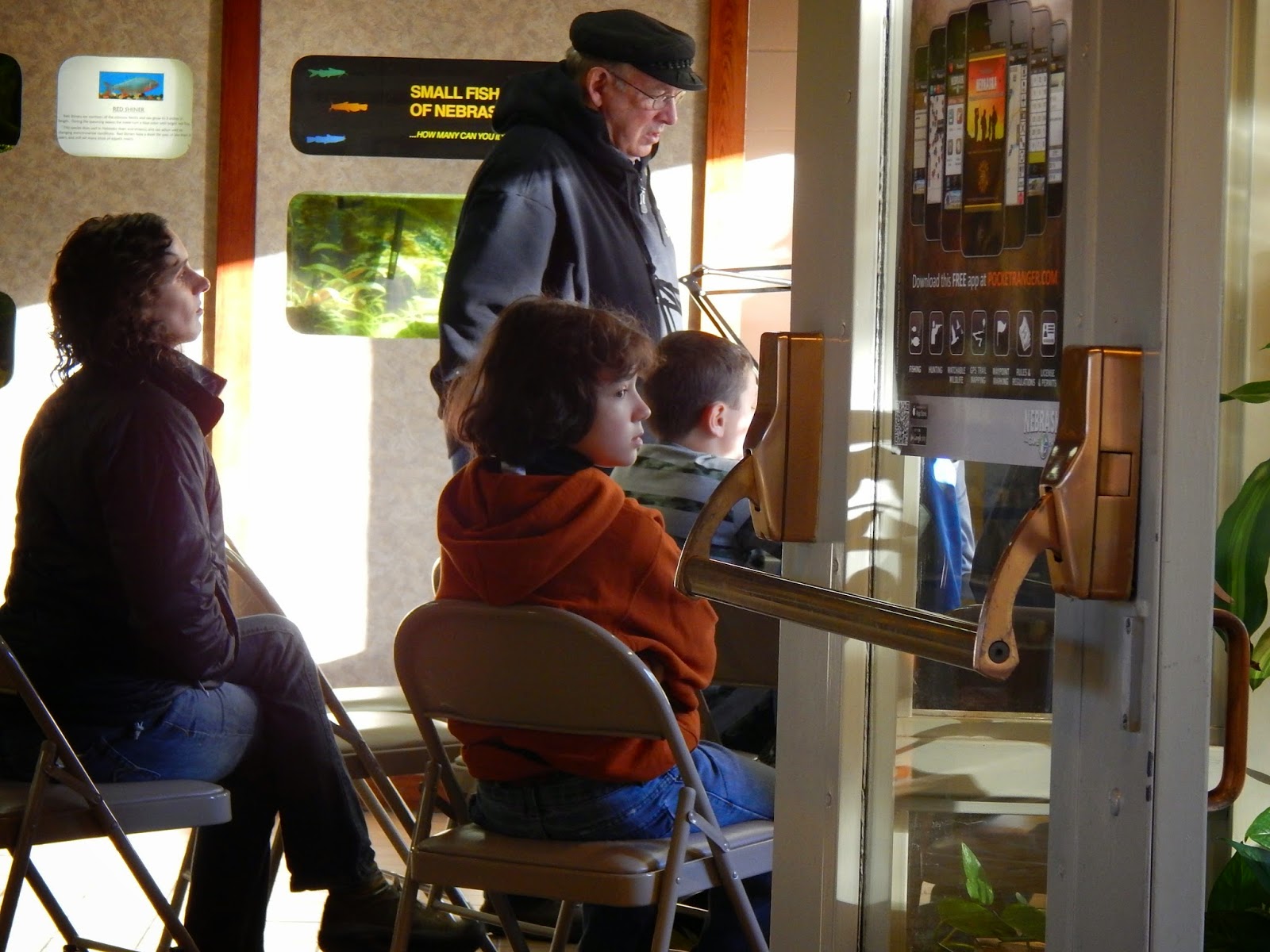 Planning the funeral Entering the data. 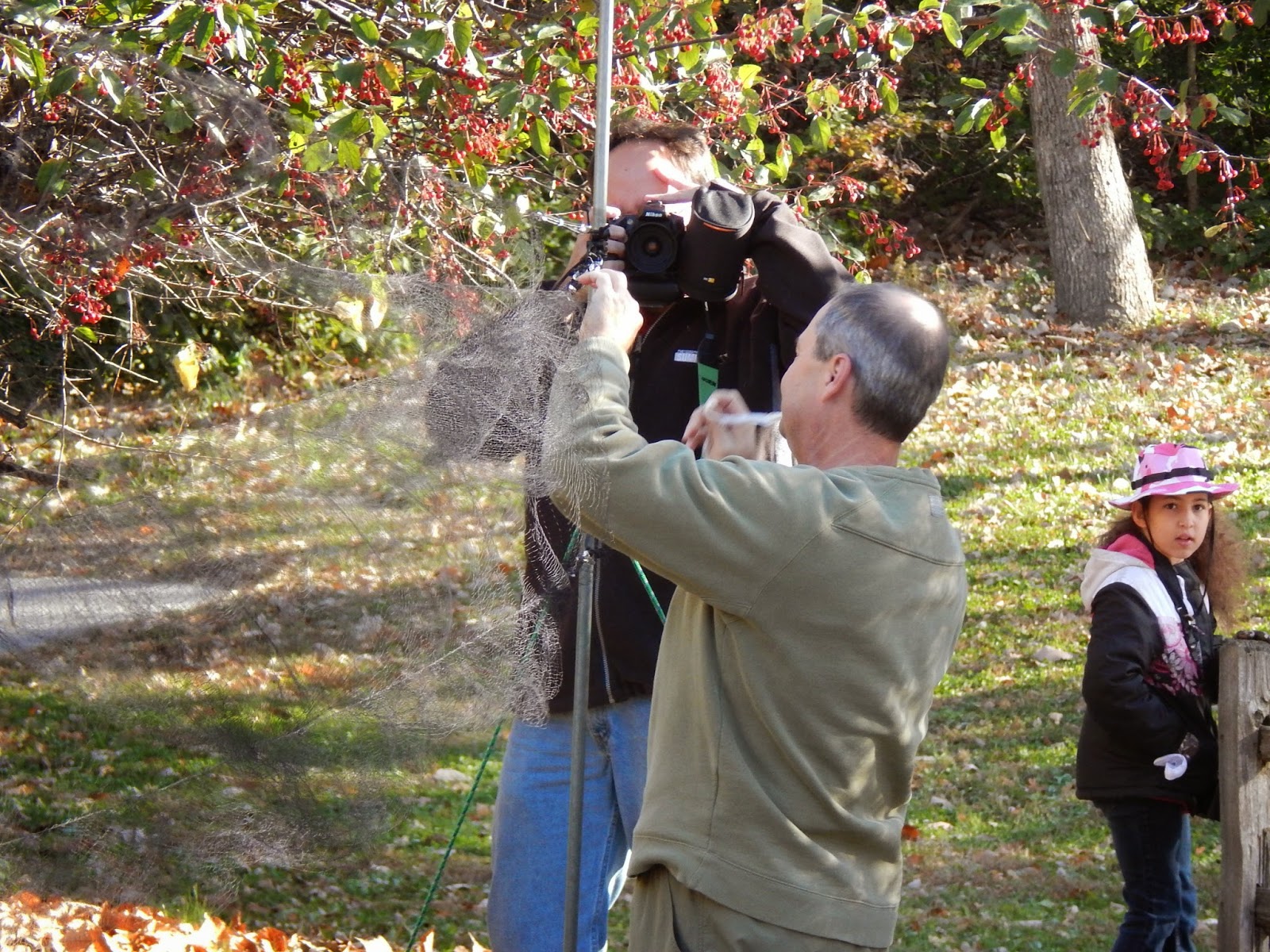 I'm really glad I wasn't holding the bird. The kids were unimpressed, but the adults were caught a bit off guard by it. Kids are like, "Oh, a dead bird. Let's go catch some more!" 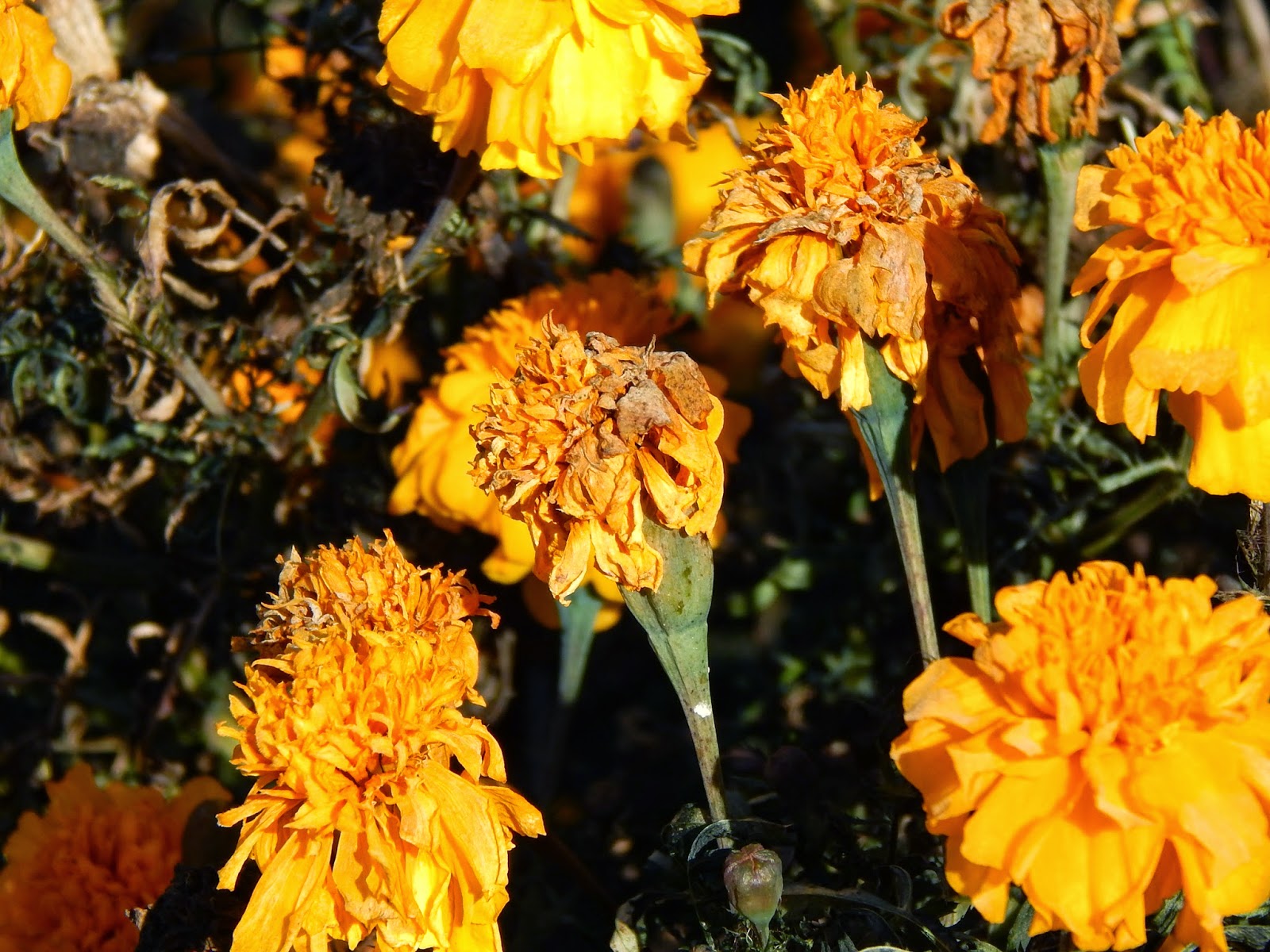 So that was Saturday. 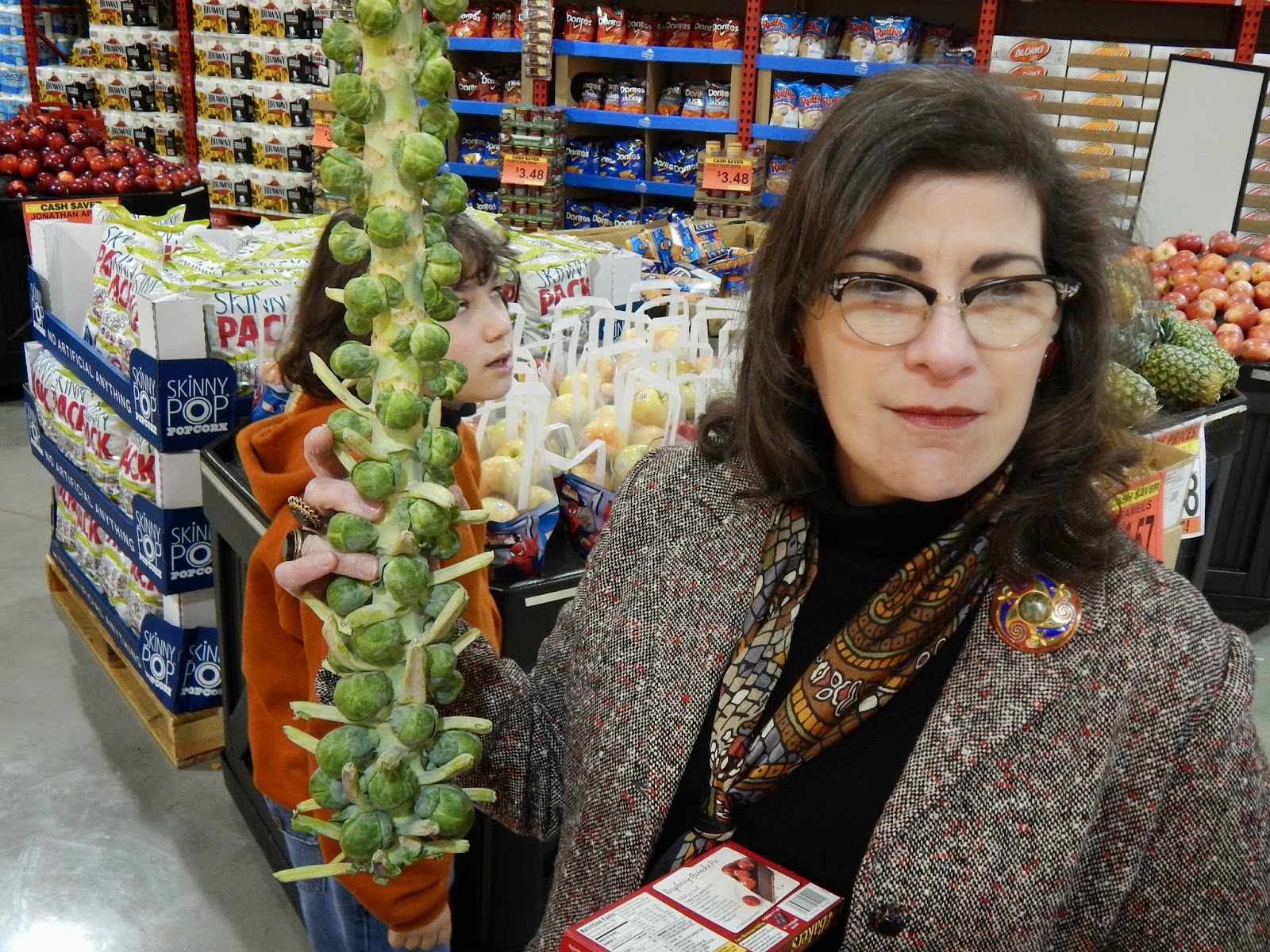 Note Danny's eye-roll behind the brussels sprouts. I tried using it as a sceptre to knight him, "Sir Sprout Head of Omaha" and in addition to the eye-roll I got, "Oh, Mother." Yes, I'm a terrible, terrible woman. So terrible in fact that you should just ignore the six pounds of baking chocolate in my other hand that I bought knowing the holiday baking is just ahead. It was on such a deep sale, it was practically free. We can think of this as illustrating a healthy, balanced diet. On one hand, you have your vegetables, on the other, your chocolate. Really, they should just put me in charge of straightening out the country's poor eating habits. Just to be clear-you shouldn't use the sprouts and the chocolate together. You'd think that wouldn't require pointing out, but if you saw the sorts of Google searches that bring people to this blog, you'd be terrified they might go ahead and attempt cooking. Yesterday, I got a search hit for, "Dried squirrel brains." It was from Tennessee. Draw what conclusions you may. No squirrels were harmed in the writing of this post. Birds...well, that wasn't ME!

A Few Outfit Particulars:
Suede trousers-quite old, think I bought them at Dots in Revere, MA.
1960's Country Miss blazer (part of a suit) Salvation Army, Lincoln, NE
Fossil Handbag-Thrift World
Wedge Trainers (oh they are so comfortable, I wish I'd bought ten pair before they went out of fashion) K Mart a couple seasons ago
Vintage Connemara marble and enamel brooch-Can't remember ever NOT having it. Old!
Black polo neck-Gordman's
Vintage Echo silk scarf-Hand-Me-Ups 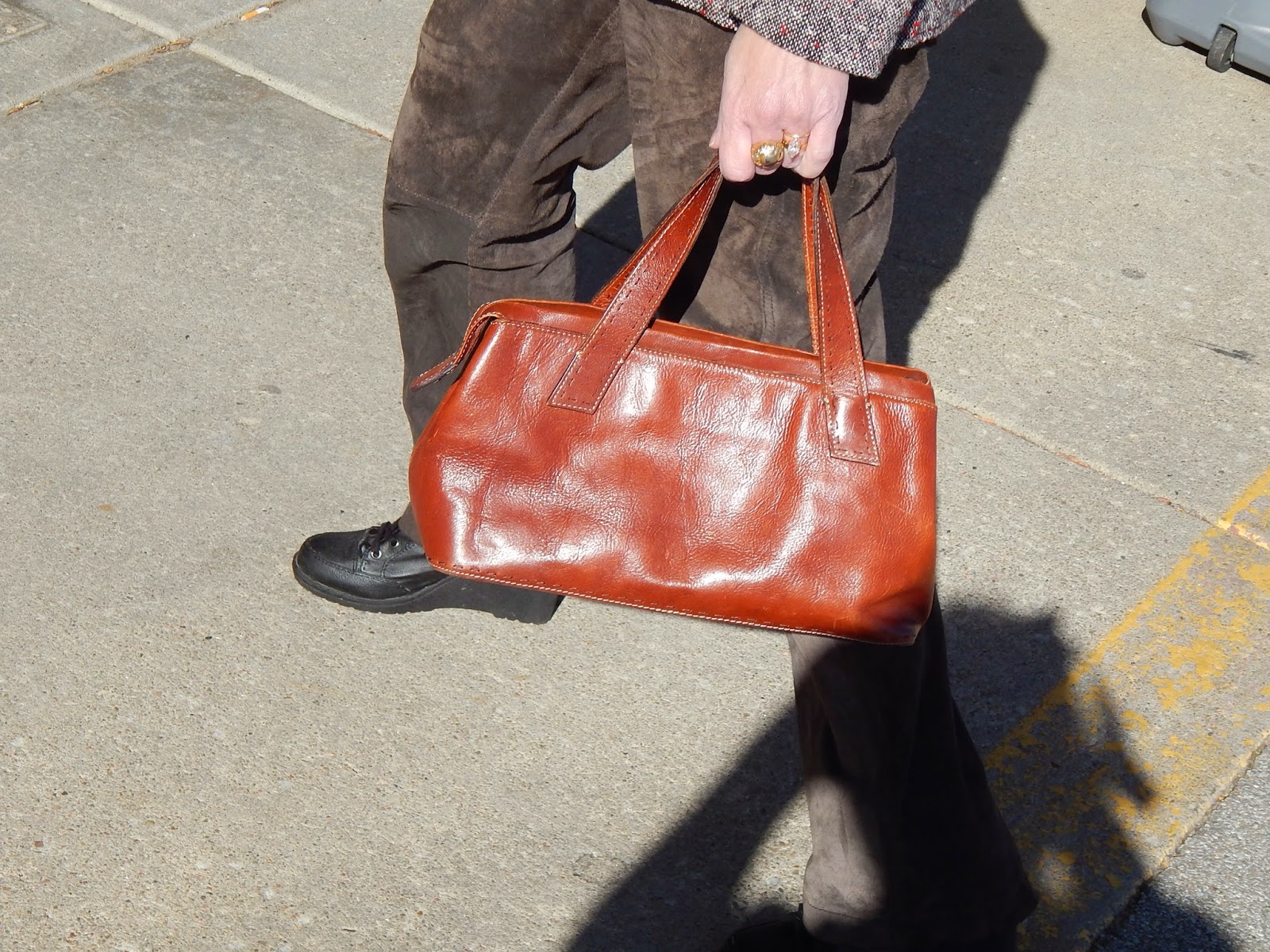 Just when I thought the weekend couldn't get more exciting, Danny came down with a terrible vertigo/nausea thing that had him grabbing the walls to walk. We took him to the Urgent Care down the street (How convenient is that?) and assured that it is viral, and will pass, he's been in bed trying not to move too quickly. I had a bit of this recently myself-and it is awful.Amazing what your sinuses and ears can do to you.  Tomorrow is the big root canal early in the morning. I have to admit, I'm looking forward to it because for that hour, no one can bother me or ask me to do anything. Like a mini holiday. They should offer spa treatments at the same time. A manicure with your root canal would be nice.

Hope you had a nice weekend. Go easy on the dried squirrel brains.

Happy bloody birthday Chuffy!!! Oh imagine stuffing your kids in the back of the fridge!! Social welfare would so be given a phone call. Crap you Americans do do BIG sizes! I just cannot do beans, my lads always called it round spaghetti when they were small. No fooling them, they still wouldn't eat it, they do now of course, but not the mumma! You and I shall be having dental treatment on the same day, shall we hold hands!!!

Happy Birthday Chuffy - good job Iestyn is in the fridge and can't hear anything otherwise he'd be mortified that we don't know when his birthday is.maybe I'll make that cake to shut him up!

@Sue
I could use someone to hold my hand right now (it didn't go well). I hope you're on the mend.

Thank goodness I'm not the only one that names their starter. Whew! There's an interesting Christmas cake I made with sourdough starter one year
http://eattheblog.blogspot.com/2010/11/sourdough-fruitcake.html

It wasn't the *best* Christmas cake ever, but it was a novel use of starter if lestyn is feeling left out of the festivities.

@Helga
When you first have a starter, it needs continual use to grow stronger, so you bake an ungodly amount of bread. After the freezer is filled, you end up giving a lot of bread away as it is impossible to keep up. In the first three years I think everyone I know was supplied with fresh bread on a regular basis. Eventually though, the starter will get to the point where it requires less feeding (like a baby) so you can neglect it (like a teenager). If you know anyone that bakes, they can give you a blob of established starter so you can skip the boring baby years and get straight to the, "Turn down that record player!" years. It does make good pancakes, and onion ring batter. I'd send you a blob in a jar if I thought they'd let it through customs (they won't).
You can have whine without bread, but I need Thou!

Oh Goody, I love they way you write your posts. This one made me laugh despite the sad times for the captured and almost released bird - data collection on that one could be completed and finished off pretty quickly. The children probably found his quick demise a very interesting event in the day. I hope your dental work is settling down.