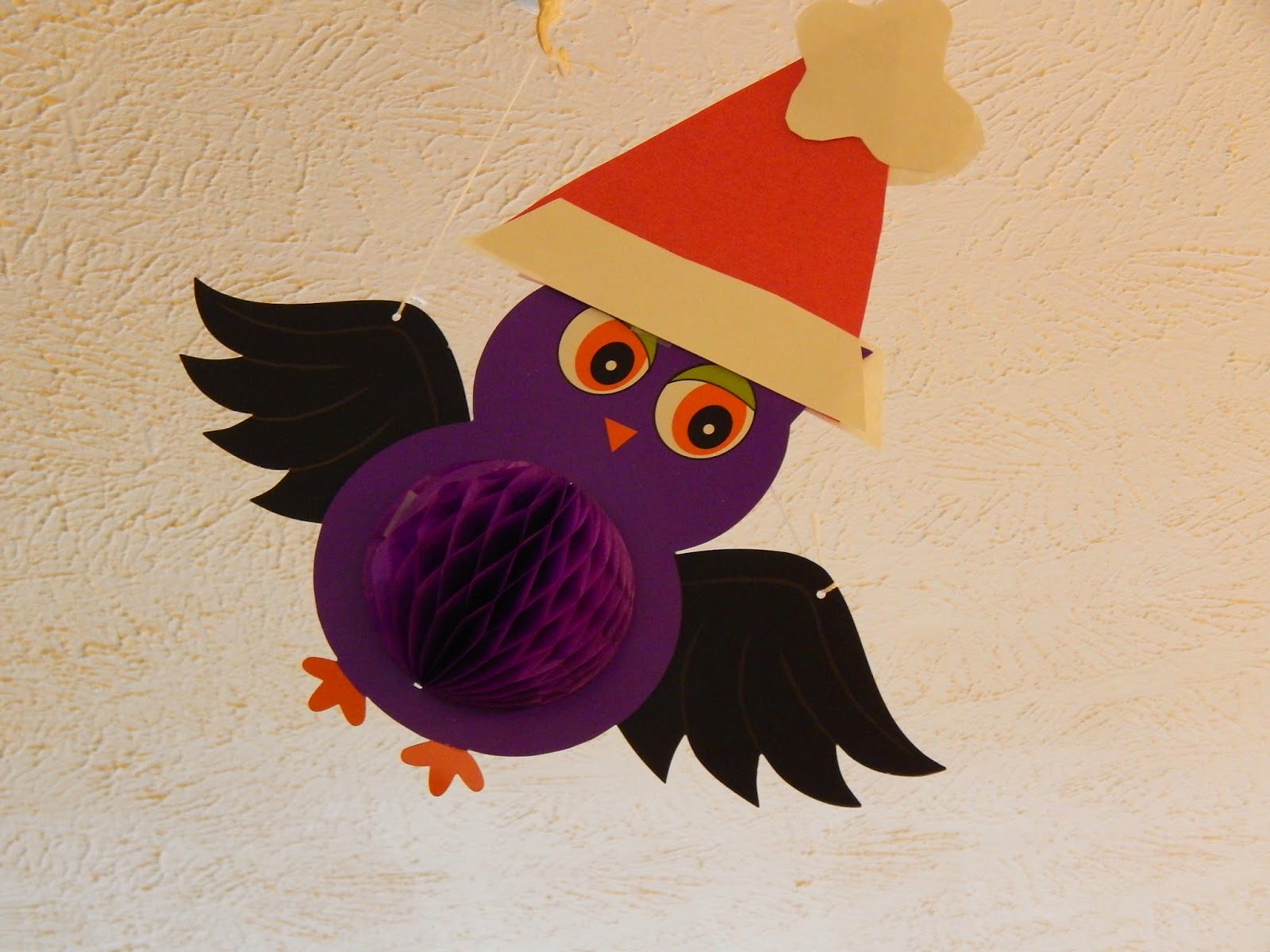 I couldn't justify taking down a perfectly good dollar store decoration just because I bought it for Halloween. I wonder how long I can keep him going-a bow and arrow for Valentine's, Leprechaun hat for St. Patrick's, bunny ears for Easter? I'm sensing a, "Through the Year With Mr. Owl" series. I have to get my dollar's worth out of him. 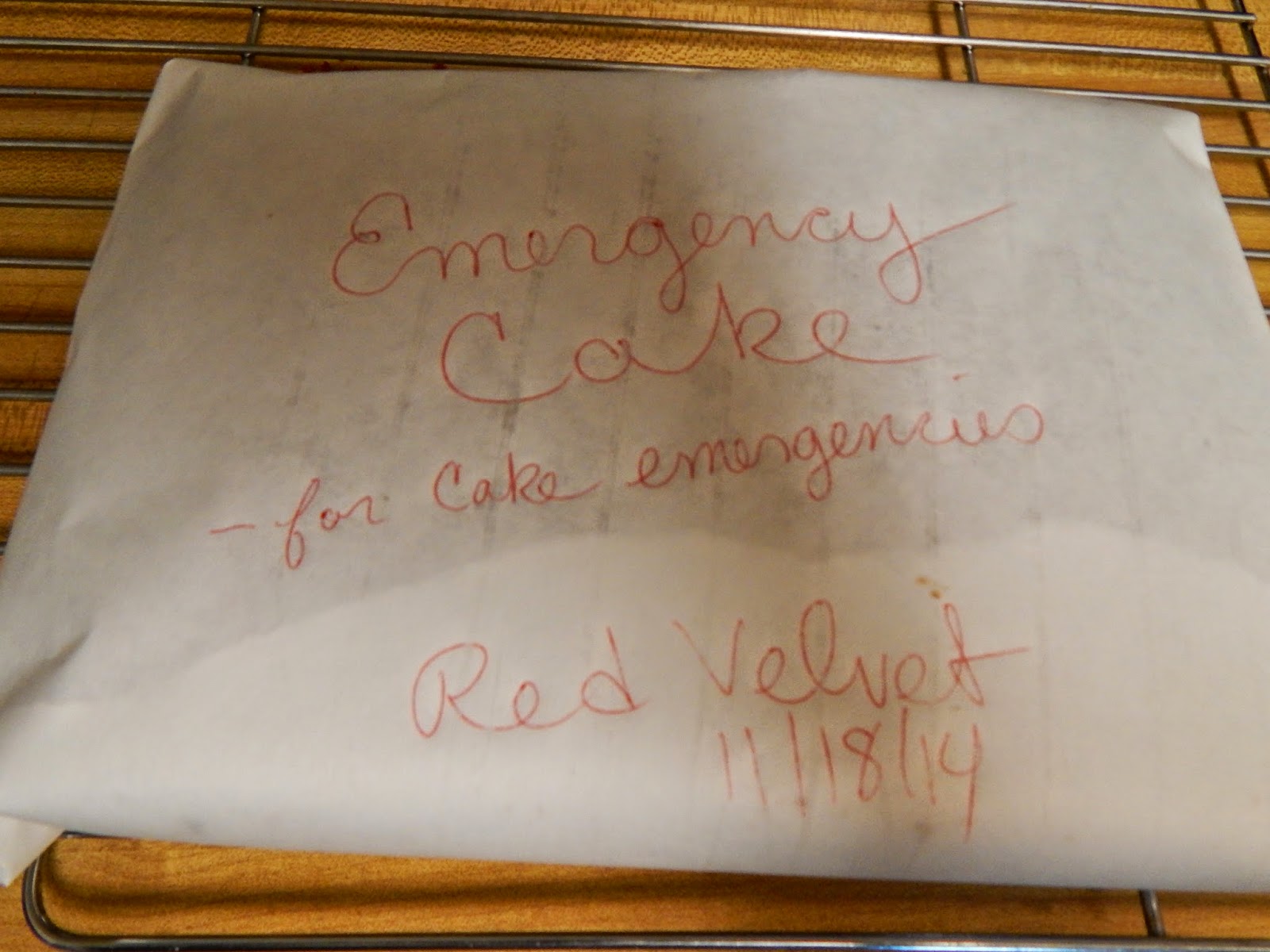 I don't just recycle decorations. My freezer is filled with half cakes, and leftover curries. I recycled the mash and sprouts into a casserole tonight. 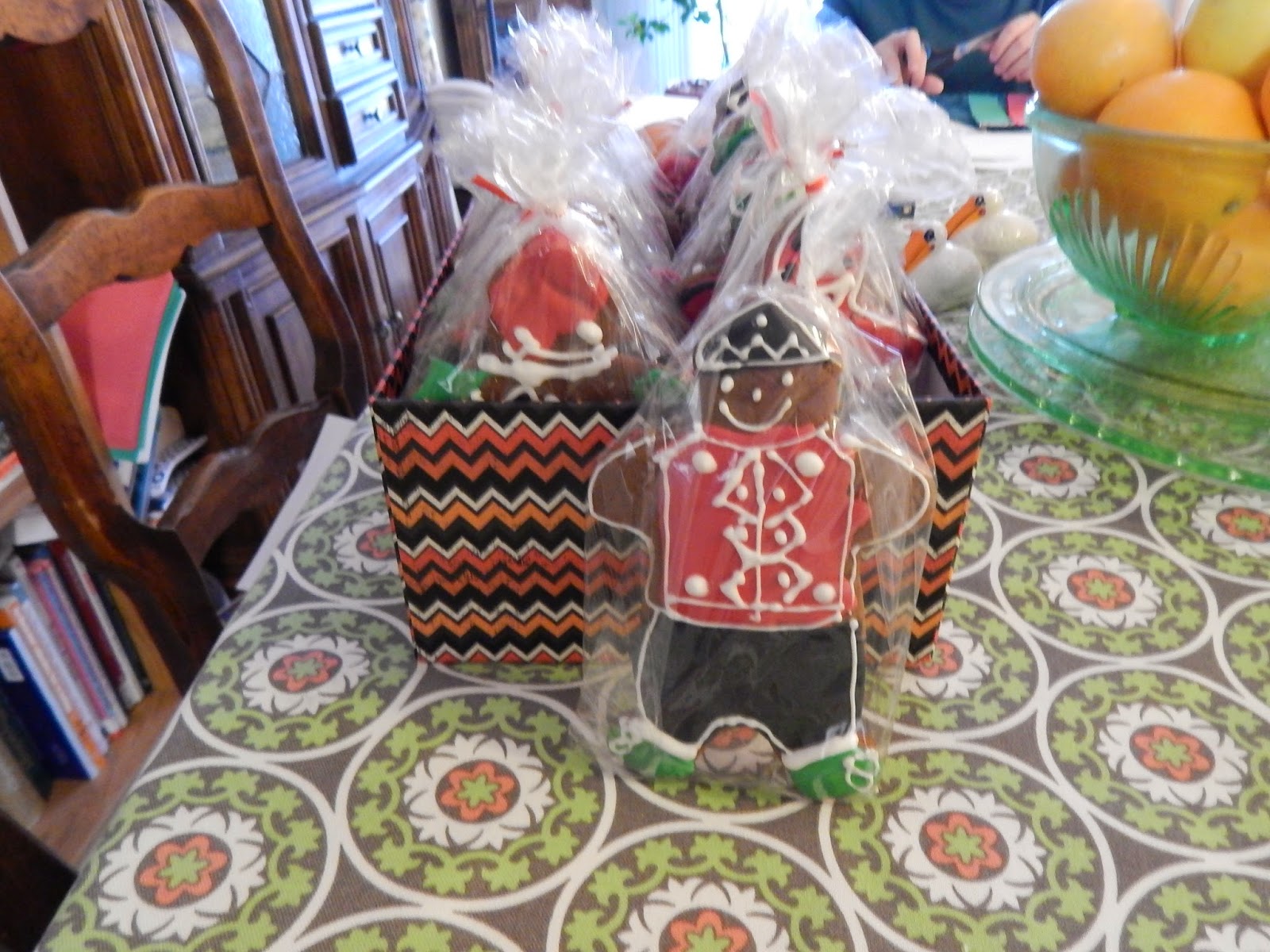 The gingerbread men for the tree (which the boys insist on assembling on Thanksgiving) are baked, and decorated by Danny, and sealed in treat bags. I'm storing them in a Halloween box as a nod to The Nightmare Before Christmas. Fine, who am I kidding-I'm too cheap to waste a Christmas box on them when I have a lightly used Halloween one at my disposal. The gingerbread men are baked with vegetable shortening and they will last straight through to New Year's. People like to snag a cookie from the tree through the season, so I always bake more than we need. After Christmas, I recycle them into breadcrumbs for thickening gravies (after chipping away the royal icing). 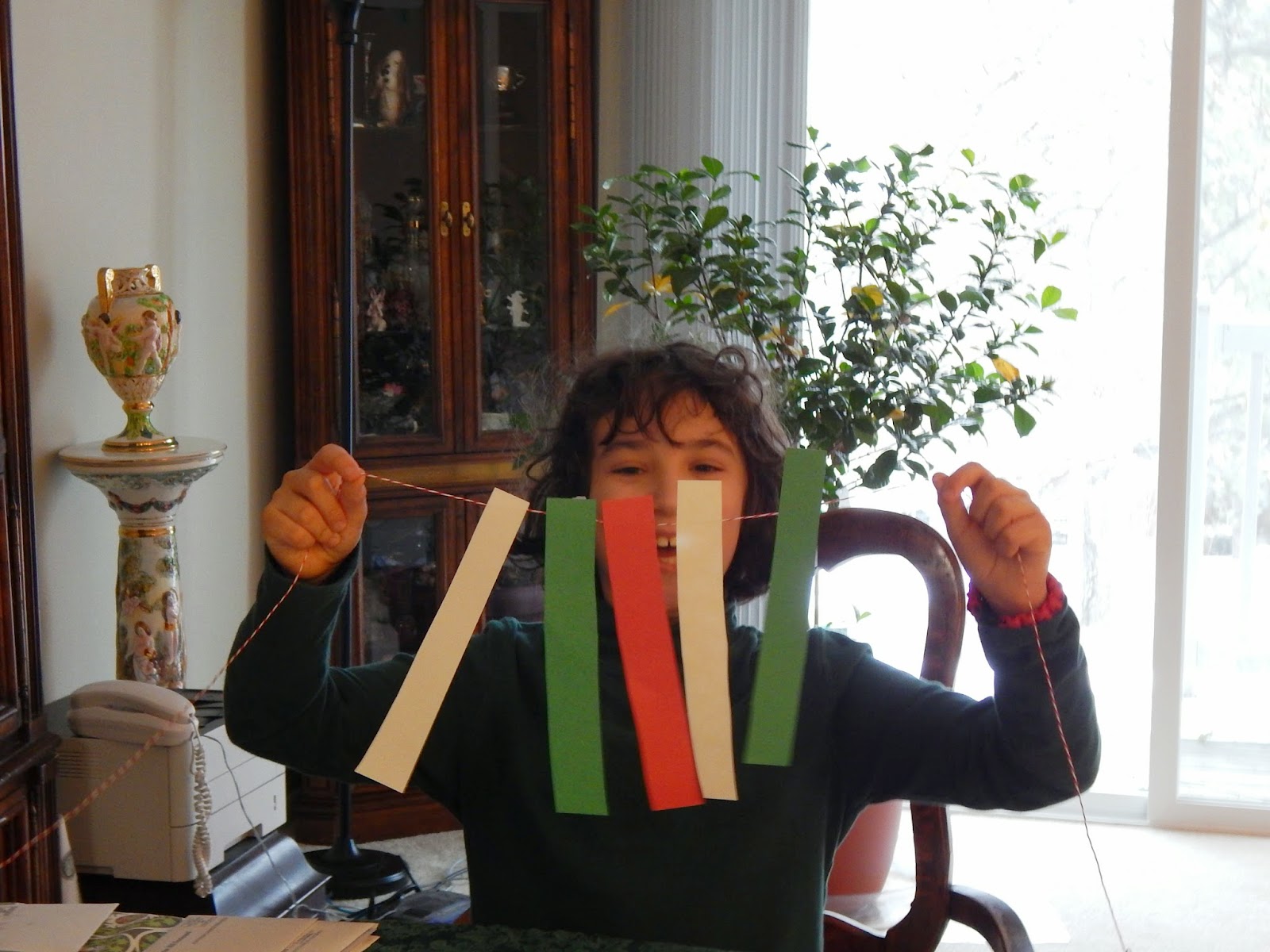 All those half-used scraps of construction paper get new life as well. Off topic-I have the same pedestal as Mary Beard. I also appear to have more books, which is positively terrifying. Wouldn't you love a peek at the titles?  "Gaius Octavius, the Untold Story of a Really Bad Roman Bastard", or "Herodotus-I made it All Up, SO WHAT? the newly discovered confession." I can't see well enough to be certain, but she appears to have a taxidermied bird beneath a dome. But hey, matching Italian pedestals.

I have to pause to tell you the story about that pedestal. My mum spotted it in an antique store, and had to have it. When she got it home (it comes apart in several pieces) we popped it into the tub in the laundry room and started cleaning it.
"Look at that detail" she said pointing to the section we were cleaning. "Even the cherubs have pubic hair."
Upon closer inspection, it just turned out to be a century's worth of dirt, which was disappointing because pubic hair on a cherub might have been an artistic first. 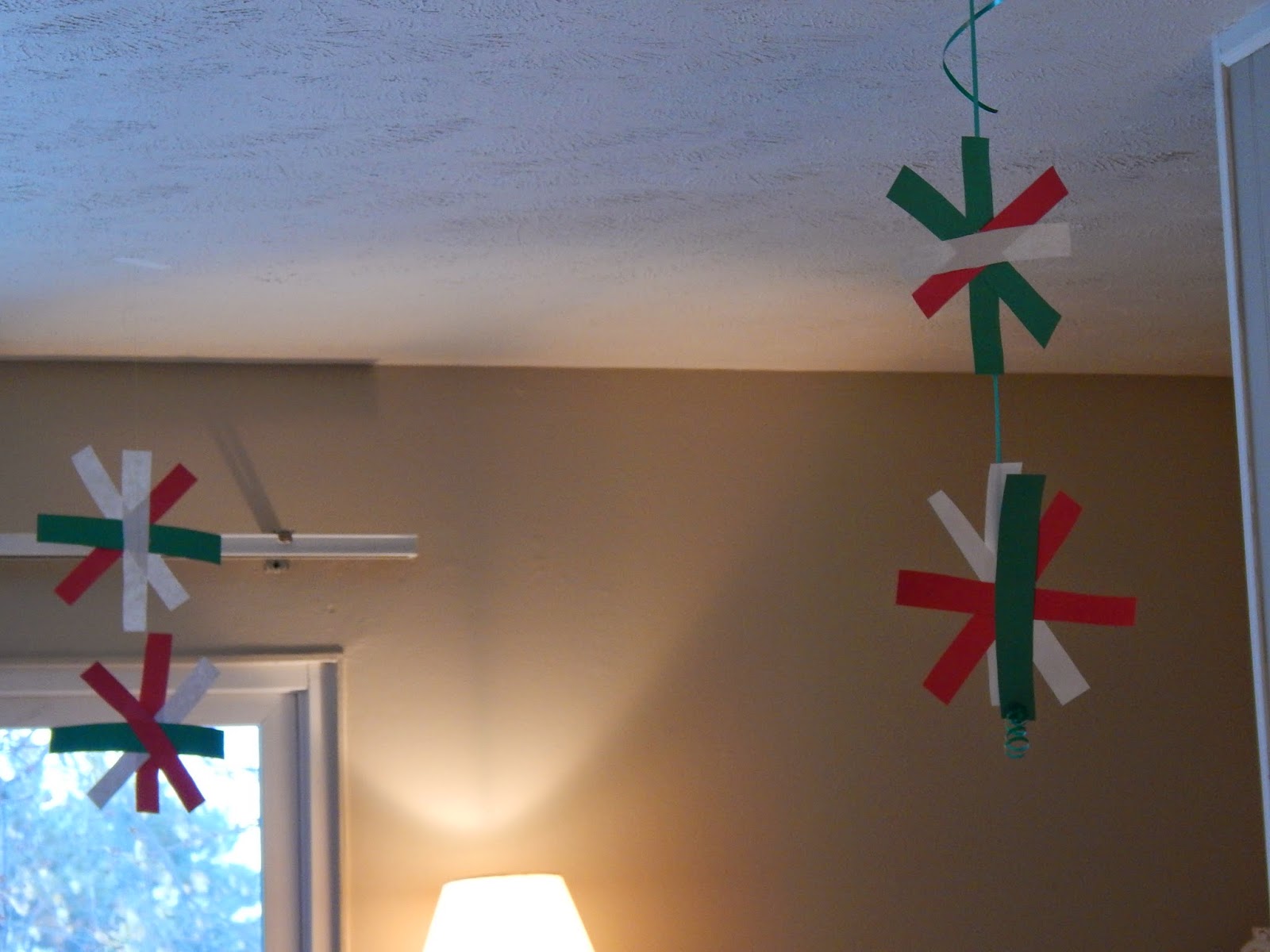 Yep, it will be a holiday wonderland in here by the time he's done. 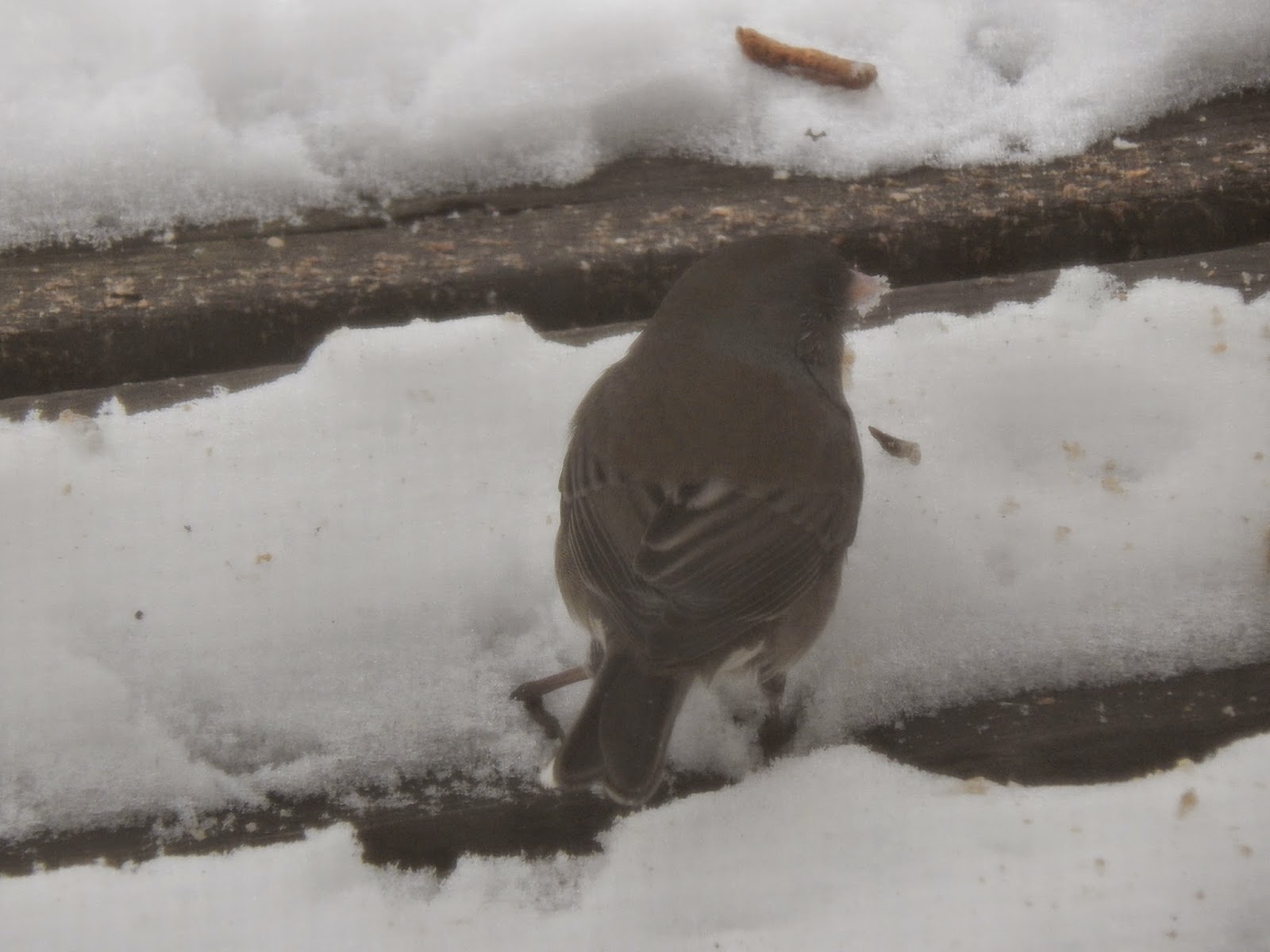 Even the bird food started life as a loaf of bread. This poor little fellow looks so cold out there with the snow on his beak and feet. I know they're OK, and don't really freeze to perches (that's urban legend)but I still wish I could make him a tiny hat and booties.

And in other news (Stop reading here if you want to end on a cheerful note, because I'm going to have a moan).

I've had some setbacks of late, just when I thought I might finally be able to go get the tooth finished. Yesterday, I woke up with a stiff knee. By the end of the day I had swelling in both knees, ankles, and the calf of one leg. I went to bed thinking it was some arthritis/lupus related thing, but when I woke this morning I had large (quarter to half dollar  sized) spots some of which were bright red, others which had already started to bruise.

"Oh, I know what this is!" I said excitedly to Mr. ETB who was by that point looking a little pale.

I should note, I am not the do-it-yourself sort of anthropologist that sets their own broken bones (though I did buddy-tape a broken toe to the one beside it years ago, but that's all a doctor would have done). I have no desire to be a GP, and I find the whole medical environment unpleasant which is why I do my damnedest to stay the hell away from it.

So I recycled a diagnosis.

About 25 years ago I was in an automobile accident. My injuries were surprisingly mild considering what the car looked like afterward (seat belts save lives, kids!). About two weeks later, I had my knee and ankle stiffen up, to the point where I was walking down stairs sideways to avoid putting weight on it. It seemed so odd to have that happen so long after the initial accident-besides, my injuries were in the top half of my body. It made no sense. Within a day I had the spots, then the bruising. I went to our family doctor who had no clue what was happening. I was referred to a dermatologist who likely wouldn't have known either, had it not recently happened to her. It was, she said  my body's reaction to the trauma of the accident. I think I was given steroids and sent home with instructions to keep my leg elevated. It went away, and I never thought about it again-until this morning. I'd say having disinfecting solution going into my body was probably the source of trauma, and the reaction of my immune system to the intrusion. Erythema Nodosum isn't terribly common in people my age, but it happens. If it isn't better after a bit, I can see a doctor for another course of steroids, but for now I'm pretty confident I understand what's happening. It is a relief, but I'm still incredibly angry about it.

Or, I could be completely wrong and this could be some horrible, life-threatening thing, or an alien life form taking over my body in which case I won't need to devote any more time to worrying about that tooth, but those are the gambles you take.

I'm managing the stairs in that sideways stepping (my left leg is the worse of the two) manner I used years ago, and keeping my legs as elevated as possible through the day. The pain isn't bad when I'm simply standing, but any bending motion, like lowering myself down to the toilet is incredibly painful. Mr. ETB says that since Christmas is just around the corner, if I want to call the medical supplies place and have an elevated commode delivered, he's cool with that. I might take him up on the offer.  I had a root canal, and now I can't walk-how crazy. On the positive side, I've made great progress on Danny's birthday quilt as I'm spending a great deal of time sitting with my leg elevated.

You don't want to see photos, trust me. Google it if you must, but I warned you. 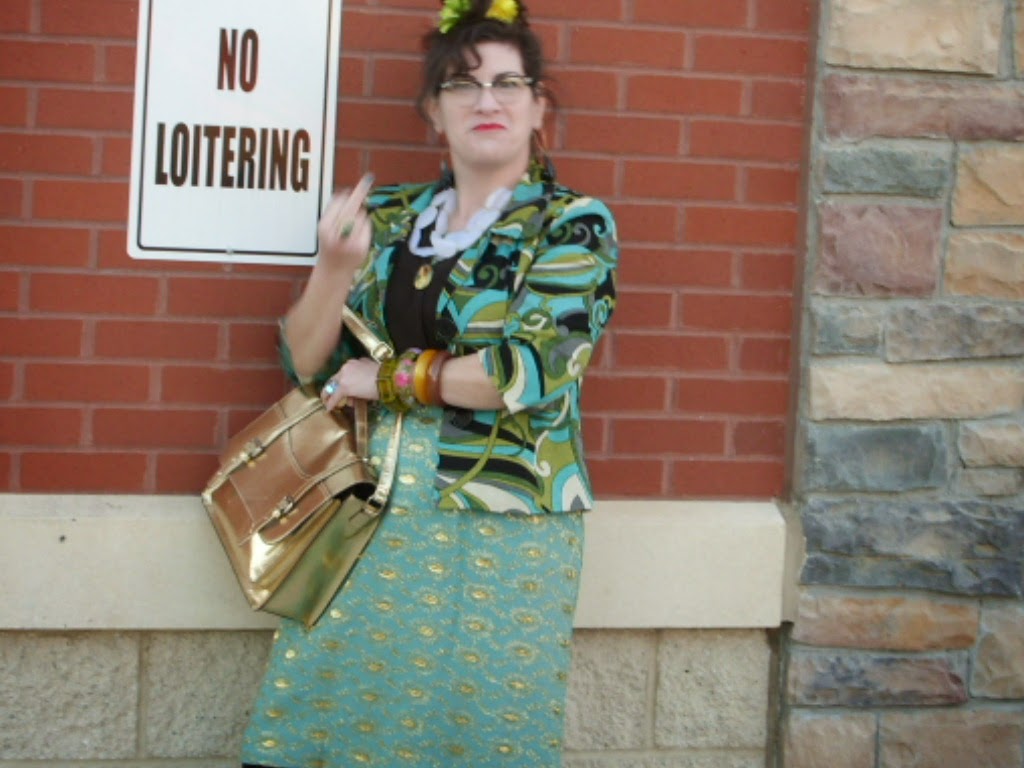 Here's one from the archives from this time last year-a recycled photo.
Posted by Goody at 6:05 PM
Labels: Dentistry, recycling

Holy crap cakes batman!! Tell me you will go to see a doctor if things don't improve. See you just should of had that dam tooth pulled out. I don't get into the Christmas thing until December, then my tree goes up. I really want a photo of your pedestal now, close up photos please. Now promise me you will take care of yourself, promise!!!!

Dear god, woman. All of this in the midst of a polar vortex too, how charming.
Do as Sue says and take care of your self. You know the drill, put the oxygen mask on you first because everyone dies if Mom's not around to take care of them...or something like that...

Even though I have insurance (that we pay hefty money for), it has a high deductible, so unless you're *really* sick, and your bills run into the thousands, a trip to the doctor is largely out of pocket. By the time they get done ordering tests, I've spent more than I would on a used car. So while I wouldn't hesitate to take Danny to a doctor, for myself it is a last resort kind of thing. Hopefully this will let up (I'm wearing really tights socks to work like compression stockings).

I promise, I won't be stupid about anything. I was kind of relieved when I knew what it was, because even though it is miserable, it is rarely dangerous.

Yes, turbulence is a good way to think of it.

Now that you've cleared-up the owl/bat confusion for me *hangs head* I'm rather fond of him. Maybe when I'm done we can send him on a blog tour.

That sounds truly horrific! I'd get myself to A&E to make sure it wasn't blood poisoning, but I'm guessing that's not as easy in the United States. Please do look after yourself.

Oh man, what next? You're having a tough time of it, Ms Juniper, and I send lots of sympathy and a hug (not too tight a squeeze though, don't want to do any more damage.)
I admire all the thrifty recycling in the midst of such crap, I love the Owl for All Seasons, and I am chuckling at the thought of cherubs with pubes! That's how I'll think of myself from now on; it sounds so much better than hirsute old woman who has to tuck her pubic hair into her knickers... Did I over-share? Sorry, just trying to cheer you up. xxx

@Mim
I could go have it checked out, but I'm too stubborn (and cheap) to do it. I'll give it a week. If it gets bad, I have a nurse living next door, and a two hospitals across the street, so someone will (probably) be there to help if I need it.

@Curtise
Nah, there's no such thing as over-sharing when you get to our age. I'm close to braiding mine.

I can't think of it at the moment but there's some awful poem by Allen Ginsburg describing his aging mother's sagging, crotch and pubes. I think it was in White Shroud, but I couldn't swear to it. God, I hate when my brain half remembers the most obscure stuff from a million years ago.

You have cheered me up.