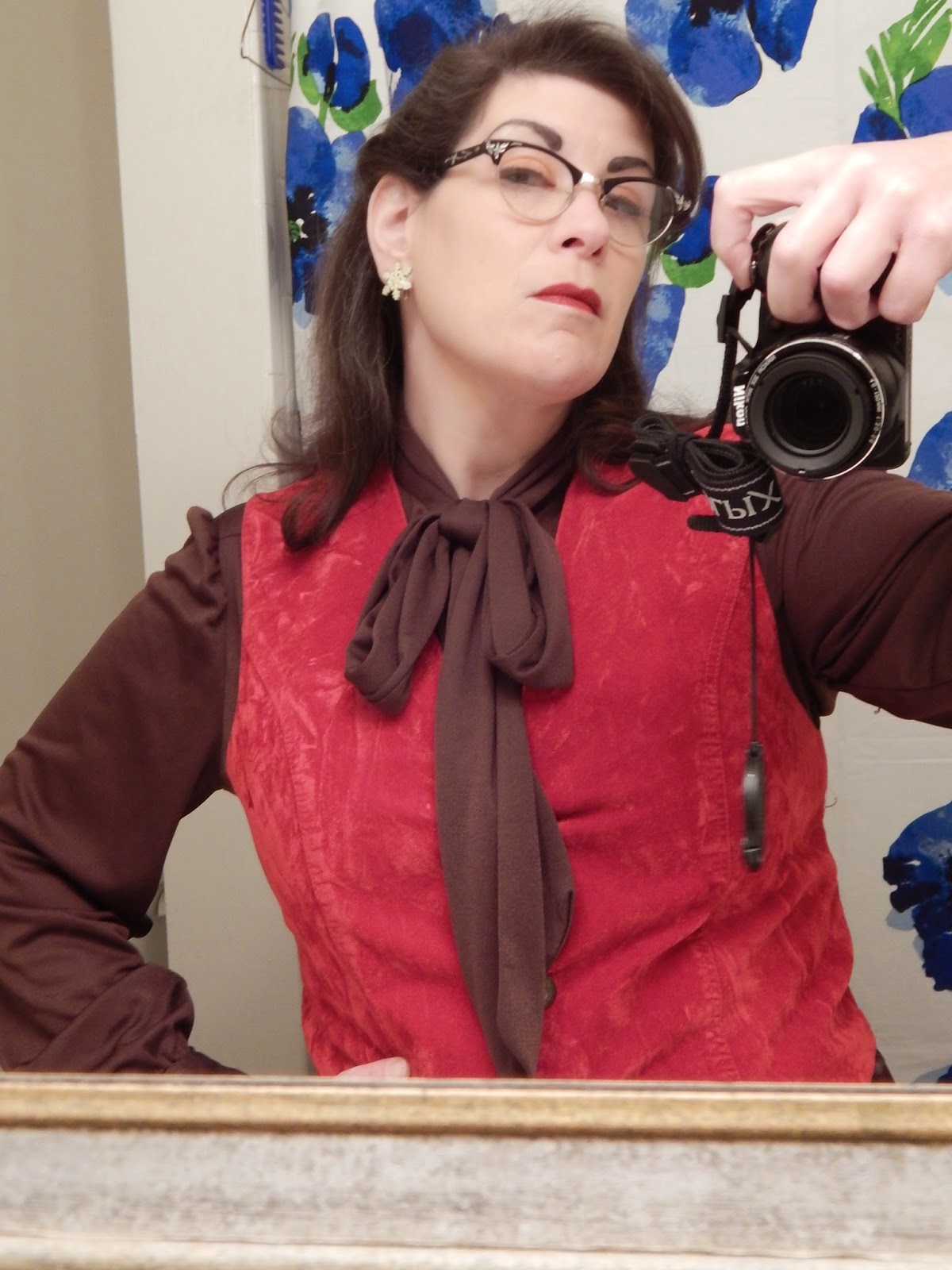 This 70's velvet waistcoat has a matching skirt-purchased over 100 miles away. Same maker, same size. I like to think some poor lady went off to Seward and had such an exciting time she forgot to bring home her skirt. Then, of course she had to donate the remaining piece as the set was now useless. Red and brown feel like an authentic colour match though I can't remember wearing it. Red and pink, sure. I do however remember those years well, and being Thanksgiving it seems only fair I share a story from that time. Sherman, set the Way Back Machine for 1977. 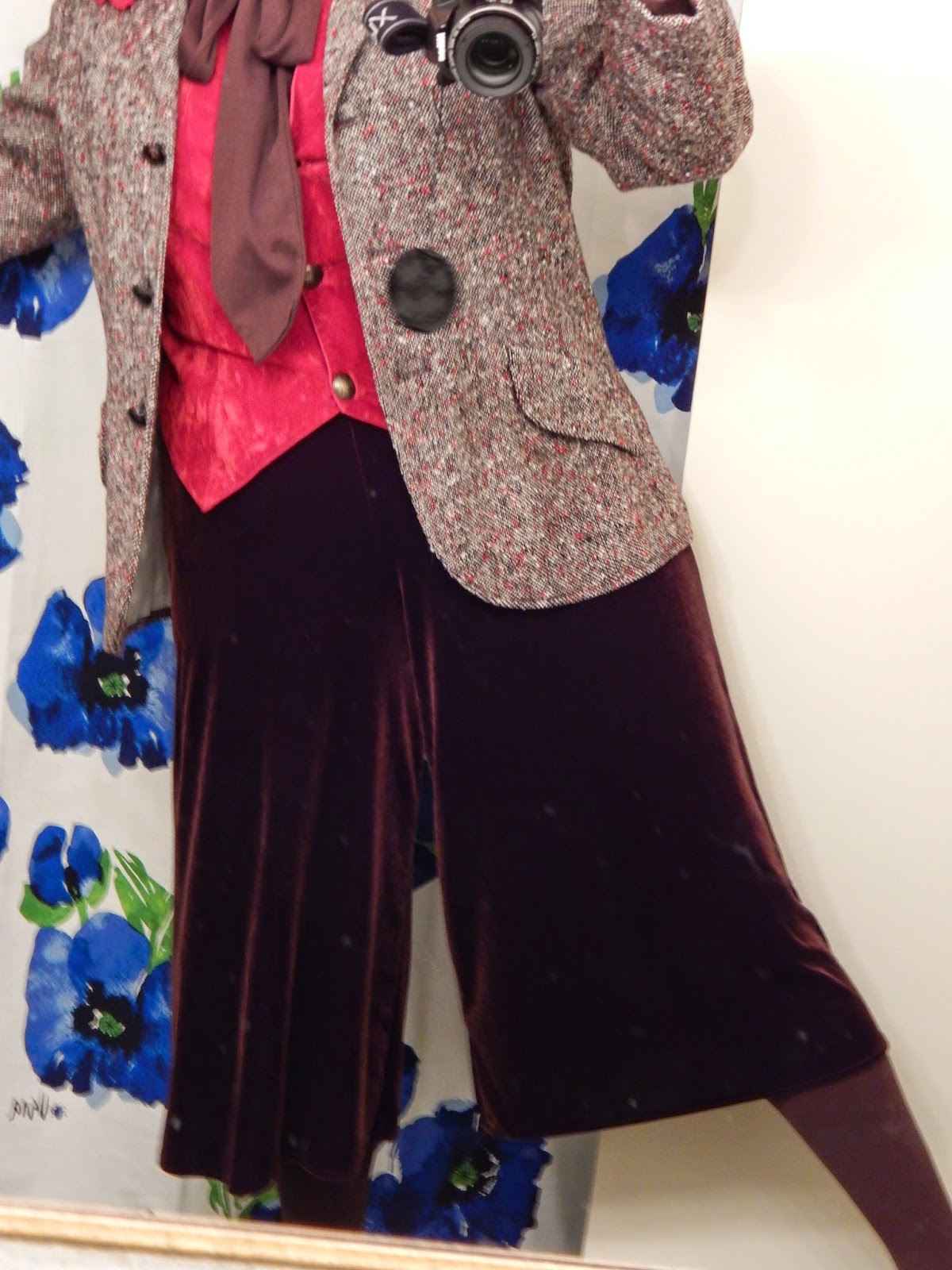 If we're going to the mid 70's, better bring along some velvet culottes.

Every few years, my mother would forget that she didn't know how to cook, and invite everyone over for dinner. I should in fairness mention that my mother was, with the exception of her attempts at cookery a rather unflappable woman. She could induce panic in others, but generally she didn't become unhinged at the unexpected. She'd been through so much, so early in life I don't think she could have summoned surprise at anything. That's not to say she didn't have a temper (she did) and god help anyone that got in her path when it was rising. Frustration is quite a different thing from panic and worry though, and the easiest way to induce a rage in my mother was to send her into the kitchen to prepare a meal where everything (more or less) was to be served at (about) the same time. Like Thanksgiving dinner. Or Christmas. Or Sunday afternoon. Or breakfast where all she had to do was make coffee and pour some quick cooking porridge into a pan with water. Timing. Some people have it, mother didn't. Most of the time it didn't matter as we took the majority of our meals out (thankfully Chicago had no shortage of family-friendly dining options) or resorted to that which could be shoved between two slices of bread (American cheese, mostly. Sometimes Brick or Munster if we were feeling exotic). In an early attempt at sculpting (I was about nine), I'd saved up a week's worth of lunches consisting of American cheese on white squishy bread (no mustard or mayo or butter even because that would have required effort) and began working them together like clay, pressing and squeezing them out through a twisted plastic sandwich bag like a chef wielding a pastry tube. Unfortunately, I'd stored my masterpiece of fake cheese and refined flour in my desk and despite the absence of anything you could call organic material in the ingredients, it began to smell. The teacher, ignoring my pleas that I could be the next Salvador Dali, binned my creation. To think I'd gone without lunch an entire week only to see my work callously destroyed. No matter, there would be ample opportunity to rebuild-it wasn't like my mother was going to learn how to cook or sport the 50 cents for a hot lunch at school.

I don't understand why people have such unrealistic expectations of holidays. If you didn't get along before, it won't be any better when everyone's trapped together eating bad food that no one particularly enjoys, but feel compelled to ingest out of some strange allegiance to a cultural tradition. The immigrants in my family always clung the tightest to these traditions which makes sense (they wanted to be here after all), but what was going through everyone else's mind I'll never know. I have never met anyone that likes the green bean casserole. Sure, if it ends up on my plate I'll politely pick at the topping (because fried onions are delicious ) but I've yet to meet anyone that wouldn't prefer a bowl of the fried onions instead. But no, on we forge, Pyrex casseroles defiled with condensed cream of mushroom soup, tinned green beans, and (god help us) water chestnuts if someone was reading the women's magazines. Maybe some pimento-for colour. At some point, when the leftover congealed casserole has been offered yet again at subsequent meals and rejected (Top Tip-it doesn't stand up to much reheating, so just heat what you think you can persuade the suckers your family to eat) it either gets fed to a willing family pet (they just go for the onions as well) or sent off to become part of an American post holiday landfill of candied yams, cranberry sauce, and tinned string beans picked clean of their onion coat. I imagine children sledding down a hill of Thanksgiving leftovers when the first snow covers the dump. Weeeeeee!

Early in the day, before we had a house full of people, my mother went to make something (I think it was a gelatin salad thing, but I can't remember for certain but being Thanksgiving the odds are pretty strong in its favour) and the jar of maraschino cherries she'd purchased for this recipe had been opened, and a couple pieces were missing from the jar. If this were a movie there'd be a dramatic pause here__________.

It wasn't like she'd mentioned to anyone, "I need these for Thanksgiving, so hands off", or left a note on them. No, they sat in the door of the fridge like so many other forgotten pots and jars of pickled and syrup preserved items. Foolishly, I ate a couple at some point. I'd like to say I remember doing it, but I was never terribly attentive when food was concerned. Where my mother and sister meticulously counted calories, I...didn't. Why buy food if you don't expect it to be eaten? It shouldn't have surprised me that my mother had counted the cherries in the jar. I'd keep expecting normal, rational behaviours out of the people around me, and instead I got people that ironed and folded the dust rags, and counted cherries in a jar.

These days, people toss around phrases like, "Frothing rage" lightly. "Oh, I was in a frothing rage when I realised Hy-Vee was out of kale chips!" No, they didn't know the diet-pill fueled madness that was my mother's inability to walk into a project for which she had no skill set, only to find her attempts undermined by a maraschino cherry thief. We all do that-get overwhelmed and look for someone to blame when it all goes to hell. The impulse may be to place blame, but the impulse is overridden by maturity,  it's how we get on with adulthood. Unless you are my mother. Some people like to scream, others slam doors. Still others find their frustration alleviated by throwing/breaking things. If you're my mother, you get all three.

In what was possibly the best punishment I'd ever experienced, I was sent to my room for the duration of the day, and uninvited from the meal. Relatives arrived, a few popped their heads in to check on me (studying for finals in peace and quiet, something not possible at a normal Thanksgiving gathering) but I was largely left alone in my quiet, all but abandoned wing of the house. It was delightful. Best. Thanksgiving. Ever. Still, I wasn't completely free of my mother's wrath. I waited, wondering when she'd get a break from ruining perfectly good food to come and yell at me for anything else.

Late in the evening, my sister knocked on the door with a plate of food and a slice of pie. It was a thoughtful gesture, but my eyes were focused solely on the pie. They had already had dessert and coffee, and people were leaving. I must have let out a tremendous sigh of relief, enough that my sister was concerned I might be ill. I remember slumping in the chair at my desk, and my sister frantically trying to assess what might be wrong with me. I couldn't speak, so immense was my relief from the day-long tension building to tight my shoulders which has been scrunched up by my ears as they are when I'm worried, suddenly gave way, my head rolling backward in what must have looked dramatic. It *was* dramatic-the whole day, and the whole lot of them. It never wasn't dramatic.

They had finished dessert. Pie was served. The whatever with maraschino cherries (minus two) was served. Thanksgiving was over. She served pie, and would never notice that large Sara Lee cheesecake was missing from the freezer.

Well, if it's any condolence my mom could cook quite well (albeit with a Virginia Slims hanging out of her mouth) but was still prone to the diet pill fueled tantrums, at least until dad passed out in his nightly alcoholic stupor.
Even though my mom could cook (& had her own restaurant for 10 yrs) I was sent to school with lettuce & mayonnaise sandwiches on squishy white bread. I guess cheese was too much bother?
Why did these people have children?
Anyway, having fond memories of some purples velvet culottes I owned in around 1972-
Happy Black Friday!!!
PS-
Since Nepal is hosting the SAARC summit the entire country is under unofficial security 'lockdown' - planes are not allowed to fly while the conference is in session & all major roads are blocked by the army. Hasn't been this weird since the Maoist take over.

*slaps head*
I forgot I have purple velvet pants too! I sensing a "velvet pants week" coming up.

Hahaha, that bit about the cheesecake made me laugh.

My husband's gran was a legendarily bad cook - her home-made cheese is the stuff of dubious legend.